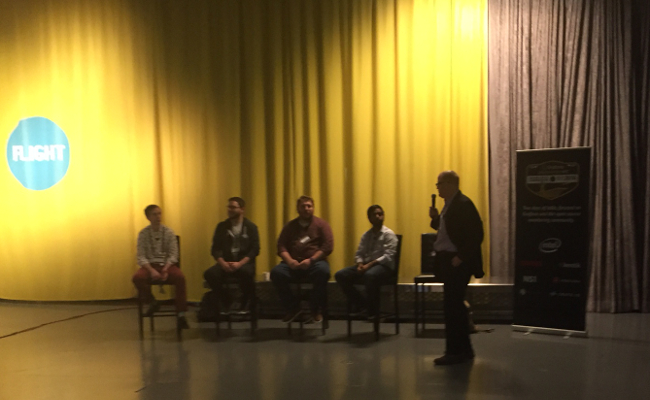 With the advent of containers and microservice architectures, a lot of questions are starting swirl about the typically quiet field of monitoring. Should you build your own stack? What should you monitor? On site or in the cloud?

To kick off the GrafanaCon 2016 user conference, which took place on the Intrepid retired battleship last week, we held a special pancake and podcast panel discussion, to mull these very topics. For the event, we invited Paul Dix, chief technology officer for InfluxData, keeper of the InfluxDB time-series database; Raj Dutt, co-founder and CEO of Raintank, which offers a commercial distribution of the open source Grafana visualization monitoring software; Theodore Staack, a software developer at office supply retailer Staples; and Matthew Brender, Intel developer advocate.

Monitoring as a whole has evolved far beyond its origins, with developers and operations teams latching on to industry terms such as, “Single pane of glass,” to describe the way that many monitoring solutions strive to provide an all-in-one, simple to use user experience comprised from multiple sources into a single frame.

Grafana is an open source dashboard tool that works with a variety of metric collection agents, including time-series database such as Graphite and InfluxDB. Streaming datasets allows for not only greater flexibility in terms queried but in determining what data one’s team needs to focus on metrics for, Brender explained.

Ultimately, though, metrics come down to what one is trying to observe. “The joke I always make is I call DevOps a gateway drug for the metrics system,” said Dix. However, one must ask: Are the metrics for the app developer, for the IT operations team, or for the line-of-business team? Do they want metrics to be pushed out from the resource being monitored (a favored approach for time-series databases.) Or, as in the Prometheus architecture, would pulling be the way to go?

As the conversation continues to heat up around the variety of open source monitoring solutions available, the panel expressed cautious skepticism toward the state of the community as a whole. In particular, the lack of standardization surrounding data collection was debated as were the hidden costs that can surprise developers piecing together open source tools to comprise their stack in its entirety. “I don’t think the open source tooling around monitoring and visibility has gotten to the point where it’s self-serve for a non-developer audience. I think that’s somewhere we have to go,” said Dutt.

“Open source is free like, ‘Here’s a free puppy,’ There’s a lot of cost, time, and effort in maintaining it,” added Brender. Staack closed the discussion on a positive note, hoping to inspire fellow developers to contribute to open source to share their own experience and expertise. “If you’re going to be trying to stitch all these black boxes together why not go the whole way? It’s much more fun, and you get a better working environment if you get people contributing to the open source project and working on stuff.”