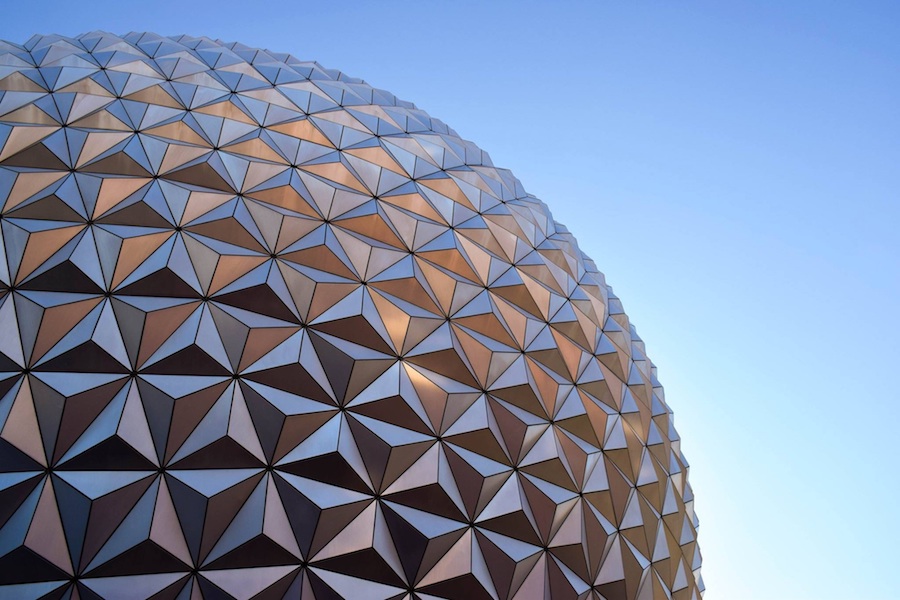 GraphQL is rapidly emerging as a viable alternative for the creation and publication of APIs.

Created by Facebook in 2012 to power their mobile app (leading Meteor core developer Martijn Walraven to quip that almost everyone is using a GraphQL API without even knowing it), GraphQL was released as an open source project at the start of 2015.

For this reason, GraphQL is being chosen by developers needing to expose data to mobile and other client applications where REST payloads have become cumbersome. In a REST API architecture, a simple query may require three or more calls for data, and then that data needs to be parsed on the client-side for the interface to display the information needed. In GraphQL, all the data is accessed by a single endpoint, making it possible to query for exactly the data that the client application wants.

In GraphQL, the whole data model is described in a schema and resolve functions are defined to explain where and how to get the data from databases.

GraphQL is well suited to the complex, nested data models that are common in social media (where users, comments, likes and groups may create a web of relationships), e-commerce (where data relationships are connected across product catalogs, sales, wish lists, recommendations, inventory and customer data), and publishing (where articles/videos, authors/artists and viewer comments have many- to-many relationships). Publishers and e-commerce sites like The Financial Timers, Shopify and Coursera are already using GraphQL.

More recently, online video sites like Vevo and Vimeo have advertised vacancies for GraphQL developers. While these use cases are mostly internal, one of the first open GraphQL APIs made available was done so by GitHub in September last year.

It is also possible for GraphQL to be introduced incrementally into an architecture, meaning it is less an either/or decision compared with REST and is instead seen as a complementary technology that solves particular pain points around accessing data while ensuring low latency and reducing query complexity. In GraphQL, the whole data model is described in a schema and resolve functions are defined to explain where and how to get the data from databases.

GraphQL may be a new approach to API design and deployment, but it is gaining rapid adoption. Tooling for the GraphQL ecosystem is growing each month. A look at GitHub repos that mention GraphQL in the title or description are growing at just under 350 new projects each month, with 3,023 projects listed on GitHub at the start of the year. 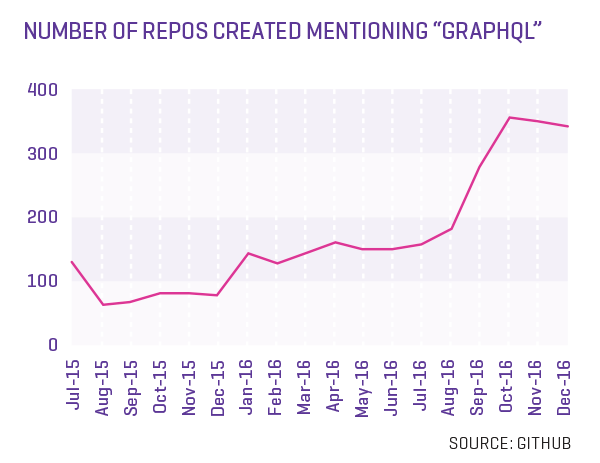 Vince Ning, co-founder of the GraphQL backend-as-as-service provider Scaphold, expects the GraphQL community to continue to grow in two ways throughout 2017: “There will be top-down growth, with the rise of more and more public GraphQL APIs supported by large companies like GitHub. That will surely move the needle, says Ning “And there will be Bottom-Up growth. The tooling and services around GraphQL have only just begun to materialize, and the community around the technology is sprouting.”

The GraphQL architecture and ecosystem are made up of the following components:

A bit more about each component, along with associated resources, follows: 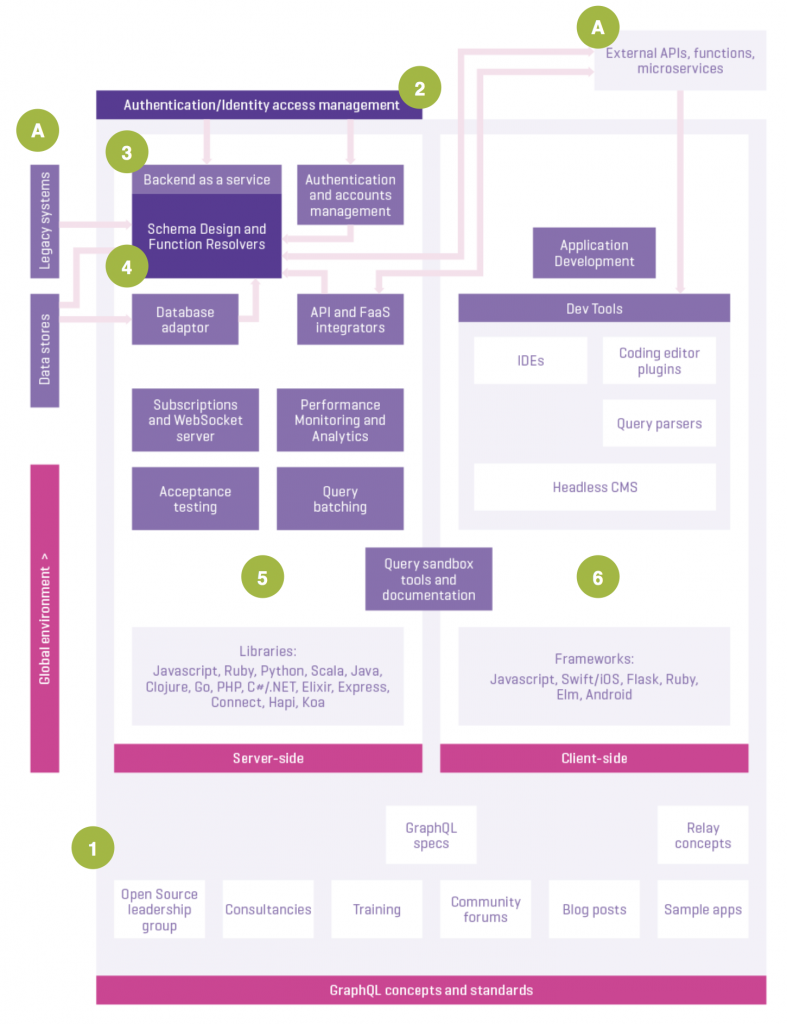 GraphQL is supported by open source GraphQL specifications as well as training, community forums, an active blogging community, Summit events, and sample app code (1). The GraphQL workflow exists within a larger global environment where data is stored in data stores, legacy systems and accessed from APIs, microservices and functions (A). An authentication and identity access management component may sit outside the GraphQL architecture which manages permissions (2). Within the GraphQL architecture, the design is defined in a schema (4) which sits on a backend server (3). This includes function resolvers which describe how data can be accessed by client-side applications. Dev Tools on the server side (5) include performance analytics, batched query tools, subscriptions and WebSocket support tools, database adaptors that map external data stores into the GraphQL schema and acceptance testing services. Client applications (6) are built that can test queries and parse results directly from external APIs alongside requests to the schema, IDEs and code editing plugins and Chrome DevTools.

GraphQL specifications have been published by Facebook. The client application framework from Facebook, Relay, also details specific concepts around how GraphQL should function. For example, pagination is not detailed in the specs, but some best practices are emerging.

Many developers are following the sort of concepts and approaches to pagination detailed in Relay, even if they aren’t using the Relay framework per se. As Sashko Stubailo from GraphQL tools provider, Apollo, explained, “There isn’t yet a catch-all solution for paginating through data in GraphQL. Just like with REST, there are several different ways to do it.”

Authentication and authorization are often being handled by businesses as a separate concern outside of the GraphQL architecture. Developers who are using GraphQL in production environments tend to use an OAuth process to authenticate the client first. OAuth grants API tokens on a user basis, and then when making a GraphQL query, GraphQL only shows those fields that are allowable to users at that permission role setting. OAuth is used to identify permission scopes. In some cases, access permissions to data are defined at the database level in dataset metadata and also described in the schema documentation, where resolvers return null for any fields where permission is not granted.

Johannes Schickling, from GraphQL backend as a service provider Graphcool says GraphQL “works really well to support identity access management and authentication, but doesn’t limit you in how you do it.” He gives the example of how in the Graphcool product, it is possible to create different kinds of access rules at the field level, defined in the schema.

Data platform Curio has also found authorization to be a bit “quirky” in GraphQL. “With a GraphQL and Node-JS implementation, it does pass down the context object to resolve functions, which after the initial authentication ow, allows us to pass down the user information, and that is where we do the authorization,” explained co-founder Steve Willard.

“At the higher Node.js level, you resolve the schema at every request, so that allows per request schemas. We can handle the authorization at that level. So mutations get added to the schema if the user has the right to do so. We have those two levels of authorization so you can’t do request forgery if you grab a user’s request. What is neat about the per request schema is that as we dynamically build a schema, it makes it more efficient for us and speeds up the request.”

Commercial products from Scaphold, Reindex and Graphcool are already available and are seeing regular uptake amongst developer communities, with SimilarWeb reporting that each site has about 20,000 visitors each month. Each service provides a regular stream of content and tutorials on GraphQL and has engaging Slack channels where problems and queries are responded to quickly.

Besides the backend-as-a-service providers having schema design tools baked into their products, there is a range of open source projects available as well. These include database, API, and functions adapter tools which describe existing databases, APIs, microservices and functions into a GraphQL schema.

Client-side GraphQL frameworks are advancing rapidly. In particular, an iOS client built by Apollo has rapidly moved from early release to being production-ready. A work-in-progress is available for Android although it is awaiting more feedback and support from the community before being officially launched.

The above directory was created as part of the background research for the free GraphQL State of the Market 2017 Report: All Your Queries Answered, produced by Platformable and sponsored by GitHub and APIdays.