The U.S. Inflation Reduction Act sets aside $369 billion in federal seed money to reduce greenhouse gas emissions by about one billion metric tons by the year 2030.
Aug 21st, 2022 6:00am by David Cassel 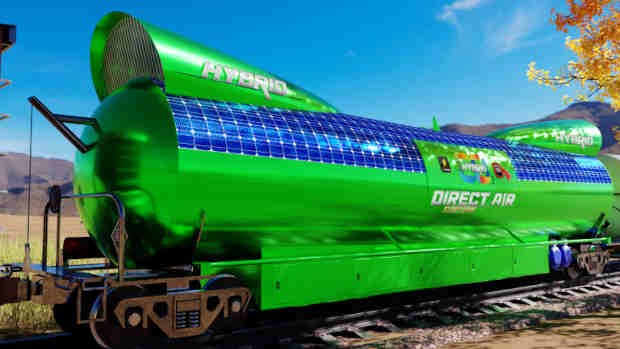 The end goal, according to the White House, is a reduction in greenhouse gas emissions by about a gigaton — that is, one billion metric tons — by the year 2030. The White House promises that the Act will position America to ultimately reach net zero emissions by “no later than 2050.”

The idea, according to the Washington Post, is to make “experimental green energy solutions, fantastical ideas that seem stolen from science fiction movies, more appetizing for investors to fund.”

One potential innovator in this space is the CO2 Rail Company, an Austin, Texas organization that is working on a railroad car that would capture carbon as it travels. Air intake valves point toward the slipstream created by the train, with the whole system powered entirely by “regenerative” energy that’s recaptured from the train’s brakes (requiring no additional external energy).

“This changes everything,” said Eric Bachman, chief technology officer of CO2,  to the Washington Post about the climate legislation. It more than triples the tax credit that companies receive for removing carbon from the air — from $50 per ton to $180 per ton, while reducing the qualifying threshold from 100,000 tons to just 1,000. Bachman believes this should in turn make it easier for carbon-capture startups to attract investors.

There’s also funding for futuristic technologies that have yet to prove their viability.

For example, there’s $280 million for research into fusion energy, which could one day theoretically recreate the same molecular processes that fuel the sun.

And the bill extends credits for research into geothermal energy — a possible boon for the idea of superhot rock energy. Water is pumped miles down into the earth, where natural heat will then turn it into steam that rises back up into an energy-generating turbine.

Superhot rock energy is a potentially limitless source of emissions-free power, according to the Washington Post — though it will require a feat of engineering that’s still years away.

The Inflation Reduction Act includes $280 million for research into fusion energy, which could one day theoretically recreate the same molecular processes that fuel the sun.

But Terra Rogers, a program director at an environmental nonprofit called the Clean Air Task Force, has new hope, the Post reported.  When the Inflation Reduction Act included geothermal tax credits, she said, it sent a specific signal to early-stage investors: “that they will have support as they push superhot rock energy from the research, development, and demonstration stage into commercial viability.”

Again and again, the same point is emphasized. “If you dig deeper, the Inflation Reduction Act [or IRA] is less about the power of government spending and more about the power of the private sector,” Time magazine noted this week.

“The tax incentives, loans, and grants at its center are all intended to nudge the private sector to go faster in deploying existing technologies like wind and solar while also advancing future technologies,” the magazine reported.

CNBC found several more climate-related startups who appreciated the coming government support. One example is CityZenith, a company creating virtual replicas of buildings “to bring together all available data in a common, easy-to-understand 3D visual model to help people make better decisions about their projects.”

Designed by some of the software architects behind Google Earth, the system aims to bring “unprecedented levels of collaboration, analysis, visualization, and prediction,” according to a web page promising actionable insights into environmental impact and sustainability.

And whatever happens next, CityZenith CEO Michael Jansen told CNBC that just the passage of the Act itself “could impact our share price in the near future and facilitate the close of a large institutional investment round later this year or early next year.”

Some even sense a new change in the fundamental outlook for emerging technologies — and for the corporate and government entities who will deploy them. In a thread on Twitter, engineer Jesse Jenkins pithily summarized the rippling impact, as  “Feedback loops y’all.”

Other startups appreciated how the Act offered a wide variety of support — not just for clean energy solutions, but for dealing with the effects of climate change. At Epic Cleantec, which builds water recycling systems, CEO Aaron Tartakovsky told CNBC that “we’re thrilled to see $4 billion directed to aiding the Western States currently grappling with a very difficult drought, a challenge we at Epic are actively addressing.”

A White House fact sheet notes there’s also money for flood-proofing of affordable housing (as well as making it storm-resistant). There are even grants to protect transportation projects from extreme heat and flooding.

That’s the other big takeaway from the 700-page bill: just how many different things it covers. The Act includes money to reduce emissions at “energy intensive” industrial plants that make everything from iron, steel and aluminum to cement, concrete, glass and even industrial ceramics. There’s even money for neighborhoods “to improve walkability, safety, and affordable transportation access.”

The law includes $1.5 billion just to fund tree planting — an example of what the Washington Post describes as “nature-based climate solutions” (since new trees absorb carbon out of the air — and can also cool the surrounding air). The White House describes a vision of “establishing community and urban forests, and expanding green spaces in cities, which combats climate change, lowers energy bills and reduces heat-related death and illness.”

A big takeaway of the 700-page bill is just how many things it covers: housing, manufacturing, tree planting, farmland conservation and rebates for households that buy energy-efficient appliances and weatherize their homes.

Of course, there’s funding for more traditional technologies too. The Act dedicates a quarter of a trillion dollars in loans, through the Department of Energy, “to retool legacy energy infrastructure like transmission lines, refineries and power plants for the net-zero economy.”

Other White House fact sheets highlight how the act will help up to 280,000 farmers and ranchers bring conservation practices to approximately 125 million acres of land, bringing them “the tools they need to adopt practices that recognize the valuable role our lands provide in tackling the climate crisis.” While reducing greenhouse gases (and increasing the storage of carbon in the soil), the White House believes it will also make farming operations more productive.

The legislation included a cap on total rebates at $14,000, and it’s limited to households with incomes up to 150% of their area’s median income. But an electrification nonprofit named “Rewiring America” estimates the bill will enable 1 million low- and moderate-income households to go all-electric.

One of the lesser-known stories about America’s climate-protecting bill is that Bill Gates pushed for it. The Microsoft co-founder had been lobbying Senators, including West Virginia’s Joe Manchin, for at least three years, Bloomberg reported this week, starting with a 2019 dinner with the Senate Energy Committee.

But Gates had emphasized that he’d experienced the connection between breakthrough technologies and government support with green companies that his own funds had invested in — where government credits could mean the difference between success or failure.

Gates told Bloomberg that they’d ultimately discussed “how the U.S. was really the only country, given how quickly this needs to get done, that has that innovation power in our universities, our national labs, our risk-taking ability.”

He emphasized to Bloomberg that he didn’t want to take credit for the bill’s passage — but that he was still very glad that it happened. “I will say that it’s one of the happier moments of my climate work,” he said, predicting a world with innovation “going way faster than I expected.

“That’s why I’m optimistic that we will solve this thing.”

SHARE THIS STORY
RELATED STORIES
Entrepreneurship for Engineers: Building for Customers’ Love 2023 Will Be the Year FinOps Shifts Left Toward Engineering 2022 in Review: AI, IT Armies, and Poems about Food How Will Working in Tech Change in 2023? How We Manage Incident Response at Honeycomb
SHARE THIS STORY
RELATED STORIES
Java's James Gosling on Fame, Freedom, Failure Modes and Fun Golden Paths Start with a Shift Left The Power and Ethical Dilemma of AI Image Generation Models Why Your Code Sucks: Common Excuses for Bad Programming Snack Stack: Turning Winter Comfort Food up to 11
THE NEW STACK UPDATE A newsletter digest of the week’s most important stories & analyses.
The New stack does not sell your information or share it with unaffiliated third parties. By continuing, you agree to our Terms of Use and Privacy Policy.