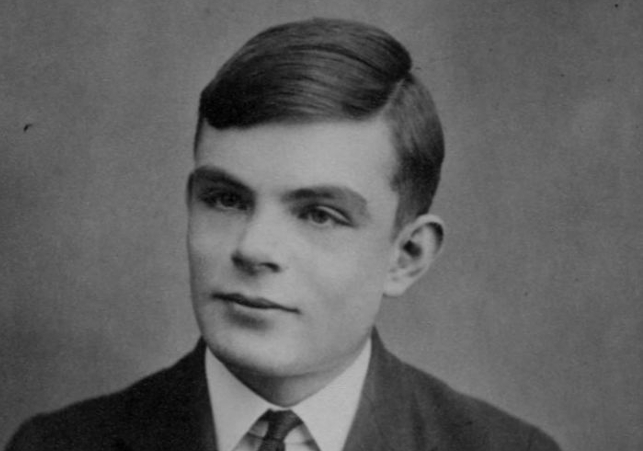 Born a century and change ago, on June 23, 1912, Alan Turing was, nonetheless, a nerd. One of us. Turing was often criticized by his bosses and university higher-ups as being too informal, scruffy even. Back in those days of the mandatory three piece suit, he often reported to work sans tie or jacket; had there been the option of jeans and a hoodie, Turing would no doubt have rocked them. Despite his demonstrable brilliance, he got crappy grades in school. He liked reading sci-fi novels. And, like at least some of us — not that the rest of us care — Alan Turing was also gay.

Oh, and in between inventing a machine capable of solving the code generated by the Nazis’ “unbreakable” Enigma machine and thus helping end World War II, he also found time to originate the fields of modern computer science and artificial intelligence.

Unfortunately, in the post-WWII era, being gay counted a lot more — and not in a good way — than being a genius whose inventions saved untold lives and whose theories launched the digital revolution.

Homosexuality was still a prosecutable crime in 1952 Britain when Turing was charged with “gross indecency” over his relationship with another man — a relationship he refused to disavow in court. Once convicted, he was given the choice between prison time or chemical castration (massive doses of estrogen to cure his “unnatural impulses”). He chose the latter, and lost the top-secret clearance necessary for him to continue his research; homosexuality was considered a security risk in those days because gays were considered “inherently unstable.” In 1954 he was found dead due to cyanide poisoning, a half-eaten apple next to his bed. Turing’s death was ruled a suicide, and his technological breakthroughs were nearly forgotten for decades afterward. Outside of theoretical mathematics circles, Turing basically disappeared from history.

This happened in part because Turing’s WWII codebreaking heroics were kept in top secret status by the British government for thirty-plus years. Even the fact that Turing had been awarded the Order of the British Empire, the highest civilian recognition short of knighthood, was secret.

Eventually, however, it became officially OK to talk about the happenings in Hut 8, the Bletchley Park nerd nest dedicated to breaking the Germans’ Enigma ciphers. Only then did Turing’s contribution — it’s commonly estimated that Turing’s work ended the war two years sooner, saving 14 million lives — began to be better appreciated. A 1983 biography by mathematician Andrew Hodges kindled further interest in Alan Turing’s revolutionary ideas regarding “thinking machines” to the point where the eccentric queer math genius gets portrayed by Benedict Cumberbatch in a major motion picture.

So here are some things we have to be grateful for, on Alan Turing’s birthday:

The earliest achievable end of Nazi war. We’ve pretty much covered this: the day after England declared war on Germany, Turing volunteered as a cryptographer. Building upon foundational knowledge gained by Polish cryptographers — the workings of the Enigma machine’s rotors and method of decrypting Enigma-coded Nazi transmissions — Turing designed a device that could reliably break Enigma’s ever-shifting ciphers.

His mathematics-based approach was so innovative that the approach itself, as well as two papers he wrote about it, were kept secret until April 2012. That this was restricted information for nearly seventy years speaks to the importance of Turing’s theoretical breakthrough and its importance to modern cryptanalysis.

Oh, you know, computers. OK, so Turing did not invent the physical modern computer machine. But he made the crucial first step by conceiving the idea that it was possible. Once that essential theoretical lightbulb goes on, the rest of us have the illumination necessary to actually get busy building.

It happened like this: in 1936, while still a grad student, Turing published a paper — “On Computable Numbers, With an Application to the Entscheidungsproblem” — that is now recognized as the founding moment of computer science. Amid the paper’s indecipherable-to-us-non-geniuses alphabet soup of mathematical symbols and theoretical equations lay a powerful idea: that it was possible to build a machine that could compute anything that a human could compute. Turing called this the “Universal Machine” and described a real machine that someone could build, one that would use 0s and 1s as the basis for computational algorithms.

It is impossible to say what would have next arisen from Turing’s one of a kind, blazingly creative and generative mind.

A decade later, in 1946, Turing produced a detailed design building upon his Universal Machine theory for something he called the “Automatic Computing Engine.” His plan included everything from the abstract structure to the circuit diagrams and even estimated the cost (£11,200). This was a digital computer in the modern sense, storing programs in its memory to be called up and re-used by the machine itself — rather than at the specific direction of a human operator. So perhaps it is more precise to say that Turing invented software, actually, since mechanical computing machines of various kinds had been proposed and built prior to Turing. The truly unprecedented leap here was the idea that a machine could “think” for itself, without needing humans to feed “what next” instructions at each and every step.

The first computer chess program. Turing first worked out an algorithm for a chess game in 1948, which had to be worked on paper because no computer was yet capable of running such complex programming. In 1953 he finally created a program to run on the Manchester University computer prototype he had been hired to design and build. Chess luminary Garry Kasparov once took on Turing’s program and concluded that it “played a recognizable game of chess.”

Artificial intelligence. One of the very first people to theorize the possibility of artificial intelligence was, wouldn’t you know, Alan Turing. In 1950, he published his masterpiece — a paper called “Computing Machinery and Intelligence” that opens with the sentence “I propose to consider the question, ‘Can machines think?’.”

Turing proposed a test that he called the Imitation Game, which is now referred to as “The Turing Test” and which remains the widespread standard for successful AI. It works like this: An interrogator asks questions. In another room, unseen, are a human being and a computer. Both answer the questions. Can the interrogator distinguish the human’s responses from those of the machine? If not, then the computer will have become truly intelligent.

Artificial life. Turing followed the threads of his artificial intelligence theories into even more nebulous territory: mathematical biology. Turing turned his formidable mind to the investigation of the appearance of Fibonacci numbers in plant structures and pattern formation in animal markings. He derived tentative explanations and representative mathematical equations. His paper on this theory, completed in 1951, is still the subject of intense investigation 60 years later.  This work is considered seminal in the field, which goes to show the breadth of Turing’s genius, and only leaves us to wonder what else he could have achieved.

Tragically, this period of Turing’s theoretical work collided with ugly reality. In December 1951 he was accused of breaking British laws prohibiting homosexuality. He was convicted in early 1952, and required to either go to jail or undergo “corrective therapy.” Turing chose the “therapy” involving female hormones — aimed, in the twisted thinking of the times, at suppressing his “unnatural” desires. It worked in the sense that he became impotent and grew breasts, but thankfully these temporary effects ended in 1953 when the year-long court-ordered treatment ended.

Turing by all reports endured this time with a stoic if forced good cheer. He also continued his theoretical work in artificial intelligence and mathematical biology, as well as new investigations into connectionism, or as we now call it, neural network computing. Turing had written a blueprint for the highly conceptual field in 1948, called “Intelligent Machinery,” and now began to work out specifics for computing using networks of artificial neurons.

This work abruptly ended on June 7th, 1954, when Turing’s cleaning lady found him dead in his bed at the age of 41, a half-eaten apple on the bedside table. The cause of death was cyanide poisoning, and the official ruling was suicide. This was the long-accepted explanation, but recently theories have started pushing back. One is accidental death: Turing was an amateur metallurgist, who worked with cyanide in a home laboratory. He was also notorious for his sloppy hygiene, and his mother and cleaning lady both testified that he habitually ate an apple every night at bedtime. There are darker theories as well — part of Turing’s misery during his legal probation period was surveillance and harassment by British police, because in those early Cold War days of suspicion and fear his sexuality was considered a security risk.

We will leave the various conspiracy theories to Hollywood and focus on the fact that, no matter the cause, Turing’s tragically early death was an enormous loss to every human.

Where would we be today if Alan Turing had not died at 41? The man who first theorized that computing machines that functioned algorithmically and universally could exist — and who then designed the blueprint. And the man who quickly followed that up with theories regarding the next freaking frontiers — still cutting edge today — of neural networking, and artificial intelligence.

It is impossible to say what would have next arisen from Turing’s one of a kind, blazingly creative and generative mind. Let that sink in for a moment — not just the contributions Turing was able to make, but all the ones he was not given time to. People sometimes joke about how the 1950s futuristic visions of the 21st century, cities on the moon and flying cars and jetpacks, have never come to pass. Perhaps if Turing had lived a couple more decades, we might all be cruising around in airborne Audis.

It’s cold comfort that in 2013 he was formally and posthumously pardoned by the British government for his “crime.” On January 31, 2017, a new amnesty law informally referred to “the Alan Turing Law” pardons the approximately 65,000 gay and bisexual men (including playwright Oscar Wilde, in 1895) who had been prosecuted under section 11 of the Sexual Offenses Act, which banned “gross indecency with another male, whether public or in private.” So there’s that.

I think I’d rather have the flying car, thank you.