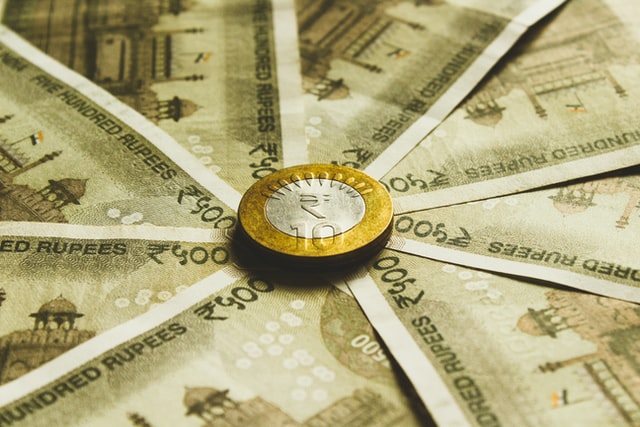 The rush to shift resources to the cloud can come with a number of bad surprises: top on the list is that many organizations have received higher-than-expected bills from cloud and other service providers. At the same time, DevOps business stakeholders also struggle with how to maintain cost-effectiveness without impeding developer and operations productivity in the name of cost control.

Harness says its Harness Cloud Cost Management platform serves as a business intelligence solution by implementing cost transparency across the software production and management cycle. According to Harness, the platform can reduce otherwise “wasted” cloud costs by up to 75% with its Intelligent Cloud AutoStopping and machine learning (ML) capabilities.

Inefficient spending on cloud services has also occurred concurrently with the rapid pace of innovation of companies adopting the cloud, with Kubernetes “taking the container world by storm as the preferred container orchestration platform,” Harish Doddala, senior director of product management for Harness, told The New Stack.

“The engineers and DevOps teams that have led the innovation have largely focussed on velocity and quality. This has led many companies, startups and large enterprises to be burdened with skyrocketing cloud costs, while efficiency or cost management hasn’t been tightly woven into the engineering practice,” Doddala said. ​”With the latest release, Harness continues to invest in bringing developers and DevOps practitioners to the core of cloud cost management to collaborate effectively with key finance stakeholders — making cost management easy and ‘boring.’” 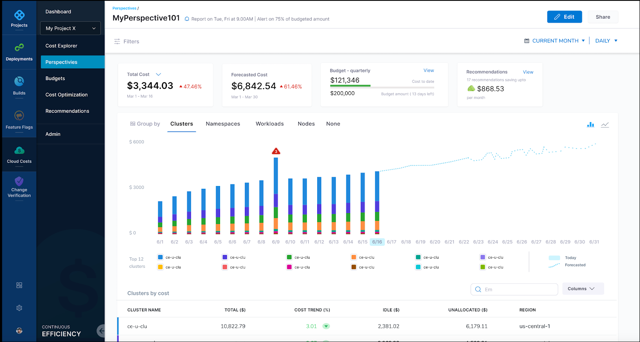 Traditionally, cost management has been under the purview of finance teams or C-level executives “who needed a high-level aggregated view of cloud spend,” Doddala said.  “Developers and DevOps teams did not have the context and visibility they needed to see and manage cloud costs related to their applications and microservices,” Doddala.

The status quo, Doddala said, was such that:

Instead, with intelligent cloud auto-stopping, DevOps teams can “reduce cloud costs by up to 75% by dynamically shutting down idle VMs and containerized workloads and running them on fully orchestrated spot instances,” Doddala said. 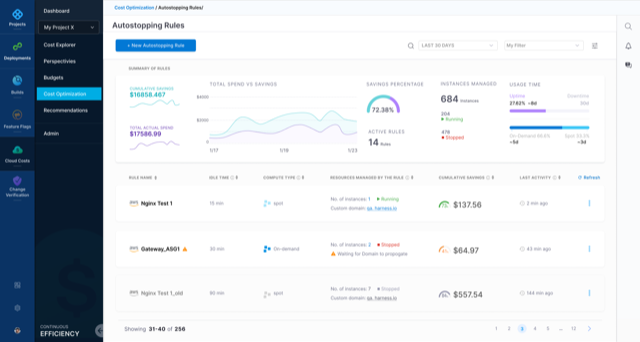 The solution shows promise because DevOps teams might want to concentrate on increasing software-release cadences, improving deployment failure rates or other related goals instead of having to spend time on monitoring their cloud spends, Torsten Volk, an analyst at Enterprise Management Associates, told The New Stack.

“DevOps teams tend to want to focus on debottlenecking their pipelines by providing all involved personas with the resources they need to be effective and therefore automatically neglect optimizing placement sizing, and most of all, termination of said resources. Their primary goal is to capture these elusive ‘other 50%’ of currently untapped developer productivity, simply by having the required infrastructure resources magically appear under the developers’ footsteps, as needed,” Volk said. “The last thing these organizations want is engineers to now start wasting their time worrying about resource cost optimization, but instead this optimization should be built into the DevOps platform. That’s why this type of DevOps-centric cloud cost management will appeal to many organizations with already mature DevOps automation that now want to squeeze out as much cost as possible without losing agility and efficiency.”

However, Volk specified that the platform must demonstrate that it can reduce costs at scale without serving as yet another potential roadblock for software deployments and management on the cloud. This is because the downfall of traditional cloud cost management platforms has always been the initial implementation effort and the ability to convince all stakeholders of the accuracy of the numbers in the system, Volk said.

“Amazon, GCP and Azure jointly offer approximately 800 different cloud services with over 1,000 APIs attached and each month we observe approximately 250 API changes and each year we see at least a dozen new services launched by each cloud,” Volk said.

Yet, “At the same time, we see unutilized or underused data center infrastructure that could be used for placing DevOps resources for very little cost, as these systems were already paid for and often are already managed by corporate IT. All of this shows the massive potential and the massive complexity of cloud cost optimization for DevOps and beyond.”

Amazon Web Service (AWS) “admitted” during its re-Invent conference in 2019 that “35% of the spend on the cloud is what may be considered “waste,” Doddala said. “We believe that number to be even higher from what we’ve seen,” he said.

However, as mentioned above, DevOps team members will probably want to achieve their IT-related goals without having to second-guess whether they are spending too much on cloud costs or not — which is why automating the cloud-spend monitoring process can be useful.

“Cost management needs to magically wrap around the developers’ and DevOps engineers’ daily tasks,” Volk said. “These are ‘expensive guys’ that our organizations want to see create business value instead of worrying about the ins and outs of cost optimization for each cloud.”

Amazon Web Service and Harness are sponsors of The New Stack.

Photo by rupixen.com on Unsplash