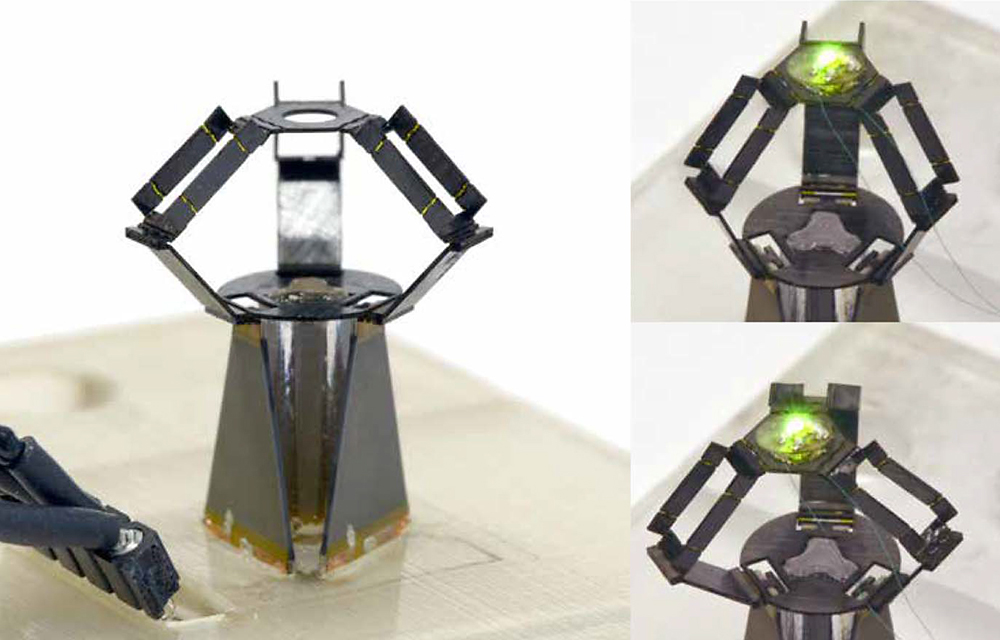 The popular mental image of the human surgeon, dressed in medical scrubs and hunched over during delicate surgical procedures, is an enduring one. But human-controlled robotic assistants have already made their presence known in the medical field during the last decade or so, and in the surgical operating room of the future, it’s quite likely that autonomous robotic surgeons will proliferate, as it’s been shown they can do more precise cuts than their human counterparts. Yet another possible scenario are miniature robots which will assist human surgeons in counteracting any minute hand tremors that might occur during such critical medical procedures.

At least, that’s what researchers at Harvard University’s School of Engineering and Applied Sciences (SEAS) and Wyss Institute are envisioning with the milliDelta, a tiny, ultra-precise and ultra-fast robot that can perform upwards of 75 motions per second, while experiencing acceleration forces of around 22g (for comparison, NASA’s Space Shuttle undergoes acceleration forces of around 3g during launch and reentry). The milliDelta is so quick that it’s a moving blur in these videos:

The team’s paper in Science Robotics explains how the milliDelta is actually a millimeter-scale adaptation of delta robots, a type of parallel robot which were invented back in the mid-1980s by Swiss roboticist Reymond Clavel to help chocolate makers quickly place pralines in packages.

Delta robots are now relatively common in the medical and pharmaceutical industries, as well as in packaging applications or high-precision assembly of electronics. Their unique design gives them an edge over other industrial robots: instead of having weighty actuators in their joints, delta robots have their actuators located in a stationary base platform. These actuators use the piezoelectric effect to move: bending when an electric current passes through. These piezoelectric actuators control a series of lightweight arms, which keep a parallelogram-shaped configuration, in turn maintaining the orientation of an attached component called an end-effector. This clever design allows delta robots to move their arms quickly, making them particularly adept at performing a variety of what are called “pick-and-place” actions, automatically grabbing and depositing things with a speed and precision that surpasses any human efforts at the same.

“Delta robots are pretty fast, but ours basically blows those ones out of the water,” Harvard researcher and paper first co-author Hayley McClintock told the American Association for the Advancement of Science. “Most currently available delta robots are around a couple of hertz, so a couple of picks per second, and our delta robot can move up to 75 hertz — so it’s 15 to 25 times higher frequency than anything that’s currently available.” 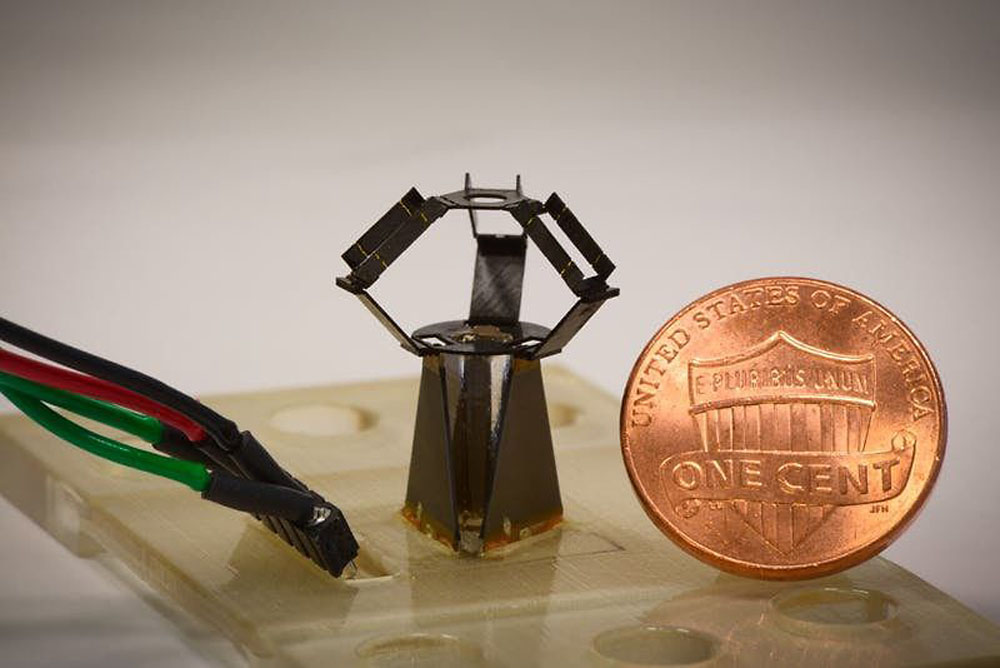 The milliDelta is built using a flatpack, micro-fabrication approach that was originally developed by Wyss Institute researchers back in 2011. The milliDelta consists of a composite laminate structure with flexible joints, measuring 15 x 15 x 20 mm (0.6 x 0.6 x 0.8 in) in size and weighing 430 milligrams. Despite its diminutive size, this micro-robot is capable of carrying up to 1.3 grams, and it can nimbly maneuver itself within a 7 cubic millimeter area, down to a range of precision of about 5 micrometers. 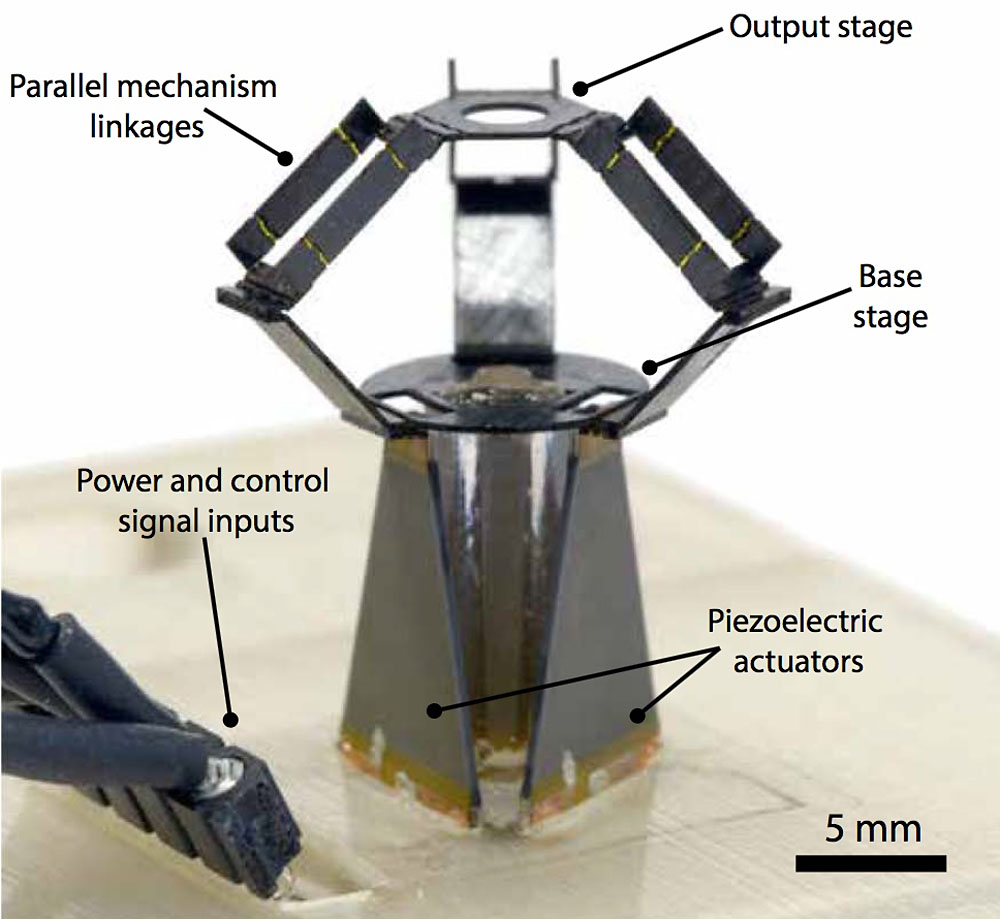 This apparent dexterity would make the milliDelta a perfect candidate for tasks that require a high degree of precision. These could range from the micromanipulation of components such as cells in scientific research, to the mass microassembly of tiny circuit boards, to improving 3D printing and microfabrication techniques, as well as improving microsurgical procedures, such as those that are performed on the eye or brain.

“One [possible use case] we were thinking of was eye surgery,” said McClintock. “You have problems with tremors when you’re operating in such a small area, so the milliDelta could be used as a tremor-counteracting end-effector for eye surgery.”

To demonstrate this, the milliDelta’s movements were tailored to balance out the general patterns of natural but shaky movements that are present in any given individual’s hand.

“We first mapped the paths that the tip of a toothpick circumscribed when held by an individual, computed those, and fed them into the milliDelta robot, which was able to match and cancel them out,” said postdoctoral researcher Fatma Zeynep Temel, another co-first author of the study.

According to the team, the milliDelta and other bots like it can be tacked onto existing devices, enhancing their abilities on a smaller and more precise scale. It’s a comforting thought too that riskier surgeries such as those that are done on the more delicate organs of the human body might become safer with such machines. Small but potentially powerful, these micro-sized versions of their industrial cousins seem poised to break out of the factories and into other exciting applications in the near future.