Terraform is perhaps the most well-known product in HashiCorp’s stable of enterprise infrastructure management tools, and its Enterprise version is used by large organizations to define and manage infrastructure using code. Last year HashiCorp announced plans to provide collaboration features — which it believes are the most compelling parts of the tool — to smaller teams, and after introducing one SaaS-based Terraform Cloud feature earlier this year, it expanded the features available within its free tier and introduced new paid tiers at HashiConf in Seattle last month.

“The two flavors of Terraform to date were open source and enterprise, with Terraform Cloud we’re targeting everyone in between,” said Anthony Davanzo, product marketing manager for Terraform Cloud, in an interview with The New Stack. The free version of Terraform Cloud, originally designed for a single user, is now available for up to five users and comes with a few extensions to the open-source project that allow small groups of users to connect their GitHub repositories and work together on Terraform files, for example.

“Sometimes what we noticed was practitioners ended up spending more time trying to deploy (Terraform) and getting to know the deployment aspects, versus actually spending time on the actual use cases and capabilities. So we also wanted to remove that initial problem or delay in getting them to use the product,” said Amith Nair, vice president of product marketing for HashiCorp.

Teams that need to collaborate across bigger groups will now be able to pay HashiCorp $20 per user per month for Terraform Cloud Team, which includes role-based access controls that small but professional teams need to properly use collaboration tools. Customers can also upgrade to the “Team & Governance” tier for $70 per user per month, which includes the Team features as well as a cost estimation tool and Sentinel, which for managing compliance rules around code policies.

“Much like GitHub provides a shared notion of a master branch for a development team, what Terraform Cloud does is provide a shared set of state so that you have a master notion of what your infrastructure looks like. It becomes a point of collaboration, just like GitHub does for development,” said HashiCorp co-founder and Chief Technology Officer Armon Dadgar during his keynote address at HashiConf in September introducing the new tiers.

Terraform Cloud is just the latest addition to HashiCorp’s roster of infrastructure management products services, which also include Vault, for managing sensitive data; Consul, a service mesh that aims to improve the manageability of microservices-based applications; and Nomad for application deployment. The company also created and currently maintains two other infrastructure-oriented open-source projects, including Vagrant for building and testing applications designed around virtual machines and Packer, for, of course, application packaging. 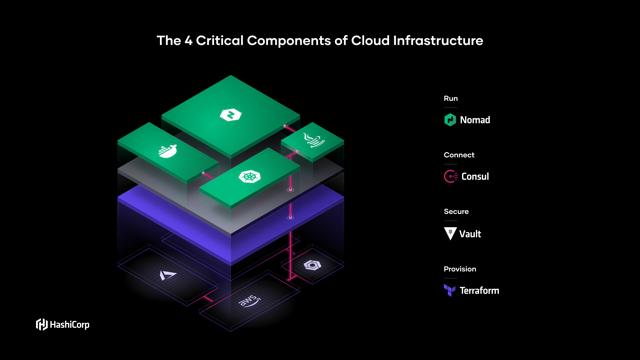 The enterprise versions of HashiCorp’s products are used inside large companies that are embarking on digital transformation, according to a recent interview in Mostly Cloudy with Dadgar, co-founder and CTO Mitchell Hashimoto, and CEO Dave McJannet. Terraform was the first product ever released by the company, but adoption was slower than expected, which actually gave HashiCorp more time to perfect the product by the time enterprises realized why it made sense for their infrastructure strategies, Hashimoto said in that interview.

Terraform Cloud is being used inside small boutique cloud consulting firms, SaaS providers that are just getting off the ground, and individual teams within larger companies, Davanzo said.

“From our experience with Terraform open source in general, as practitioners come in and get used to the idea of infrastructure as code, more and more folks in the organization are using it,” Nair said.

Terraform Cloud also furthers HashiCorp’s evolving SaaS strategy by introducing a new workflow that the company believes is the most efficient way for small to medium-size businesses to consume Terraform. The new workflow gives users a template for how to get up and running with Terraform, starting with the process of defining infrastructure using HashiCorp’s scripting language and linking version-control systems to automate application provisioning.

With the new Terraform Cloud features, “we’re making that workflow accessible to everyone, not just the large enterprises that can pay us a lot of money. What it does is help create a really steady pipeline towards people standardizing on those workflows and then adopting the enterprise product when it’s right for them,” Davanzo said.

Companies using applications where performance is very important will probably still want to use Terraform Enterprise either on their own servers or on the cloud provider of their choice, Davanzo said. Some day Terraform Cloud might evolve into a product that even larger enterprises will want to consume as a service, but right now the technical challenges around providing that service for mission-critical applications are too complex, he said.

Additionally, the new Terraform Cloud tiers are limited to email support, which isn’t going to cut it for companies with complex environments or where uptime is especially sensitive to the business. Terraform Enterprise comes with a service-level agreement, and also integrates with popular enterprise single sign-on tools.

But on the other side, Terraform Cloud could be a proving ground for Terraform inside companies that might want to use the Enterprise version but are wary about committing to a more expensive contract.