Headless Robot Cats, Parallel Realities: CES 2020 and the Shape of Things to Come

Each year the Consumer Electronics Show (CES) in Las Vegas is built up as a near-magical celebration of how the world's technologies are evolving. Its annual revelations promise the primal intrigue of a mythical harbinger of our own future, tantalizing us lucky mortals once a year with its glimpses of things to come.
Jan 12th, 2020 6:00am by David Cassel 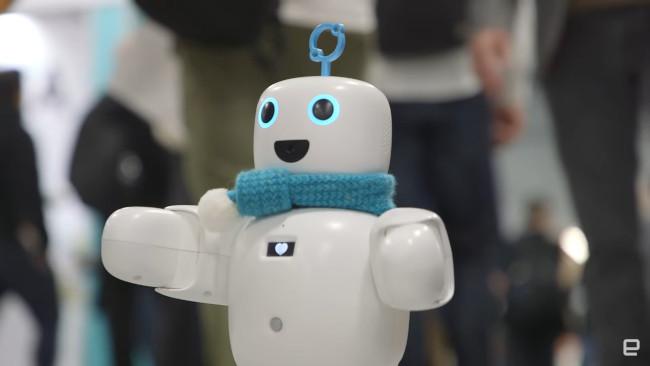 Each year the Consumer Electronics Show (CES) in Las Vegas is built up as a near-magical celebration of how the world’s technologies are evolving. Its annual revelations promise the primal intrigue of a mythical harbinger of our own future, tantalizing us lucky mortals once a year with its glimpses of things to come.

As the tech press scrambles through glitzy exhibits at the Venetian and Mandalay Bay Vegas resorts, they hold the hope that they’ll find something more — maybe hints about which direction all this technology will ultimately be taking us next. If nothing else it’s a fun and fascinating chance to speculate based on how existing capabilities are morphing into brand new real-world applications. This year’s CES was no exception, offering glimpses of cutting-edge interfaces and some genuinely breakthrough technologies.

And of course, visitors also got to see the very latest in consumer robots.

CES has been gracing us with its glimpses of the future for more than half a century, according to a remembrance by the founding editor of TWICE CES Daily. But it’s come a long way since that very first CES in 1967 when the panels discussed new developments in technologies like radio and video recorders — for a whopping 17,500 attendees.

Here in the 21st century, the Washington Post notes this was the second year with a section for climate-related technologies, which this year featured offerings from nearly 40 different companies. A Senegalese company named Dictaf asserted its AI solution could help farmers improve their crops. NextMind unveiled a dev kit for a brain-computer interface “that translates signals from the visual cortex into digital commands,” according to VentureBeat.

And CNN compiled its own list of this year’s “most talked-about” CES products. (“To your left is a headband that promises to read your brain waves and get you to relax. A few rows down is a toothbrush that will tell you if you’re brushing too hard. In yet another area: an Alexa-enabled Lamborghini…”)

There was one trend that was impossible to avoid. The ubiquity of smartphones gives the form factor a kind of gravitational pull that may ultimately change the shape of other technologies. On CNN’s list is the Sero TV from Samsung, which has the ability to rotate itself 90 degrees to display. “Sero” is the Korean word for “vertical.” “This is the first TV that allows you to look at things in portrait or landscape,” Scott Cohen, senior manager of Samsung training, told the Washington Post.

CNN called it “The vertical TV no one asked for.”

But its envisioned use-case is for TV viewers who are throwing (or “screencasting” or “mirroring”) video from their phones onto a widescreen TV. And it’s not the only heavily-funded product that’s chasing after consumers with cellphones. The Verge also reported on a new streaming service called Quibi hopes to become the premier service for delivering short episodic videos to smartphones using a “supposedly revolutionary video-streaming technology that delivers portrait and landscape video at the same time.”

“What’s unclear is whether anyone wants to watch Hollywood-style rotating video on their phone in minutes-long increments, let alone pay $5 a month to access it with ads.”

But it’s a major effort. The Los Angeles Times reports that Quibi is working with Google and already has a partnership with T-Mobile.

But as reporters wandered the scattered exhibit halls of this year’s CES, it became clear that consumer technology can take many shapes and forms…

“It wouldn’t be CES without robots,” joked CNN.

Engadget’s senior editor Andrew Tarantola seemed particularly taken with the piBo “companion” robot, a “social robot” can read you the news and weather, play music, provide notifications, share trending topics, and even tell you a joke. Or, as  he put it, “It’ll basically be your little robotic friend.”

PiBo can respond to both voice commands and input from its phone app, and even QR-enabled flashcards, according to their report, and there’s also an app store where you can download additional features. Best of all, its OS is based on Linux, so geeky owners can get under the hod and code up their own features. “Its feature set is only limited by your imagination — and coding skills…” reports Tarantola.

“Personally I’m a fan. I would definitely pick one of these guys up and let him run around my house terrorizing my cat. Because he deserves it.”

“And then there were the robo-cats,” quipped CNN.

Shoutout to @BridgetCarey for the best reaction at #CES2020 so far pic.twitter.com/upEiViOJo1

CNN took special note of the “bionic feline” developed by Elephant Robotics that not only walks around and stretches like a cat, but can recognize faces and obeys 20 different commands. CNN joked that “It may be the only time a cat will listen to you.”

CNN also describes the newest product from Yukai Engineering as “a headless robot kitten.” The company had already introduced a headless robot cat, described on their website as a therapeutic “tailed cushion that heals your heart.” It explains that Qoobo’s cushion will indeed wag its tail when you rub it — or sometimes, even when you don’t, “just to say hello.” But this year they’re now planning to release a smaller portable “petit” version, according to the Verge.

This is the only #CES news that matters to me.

It’s available in three colors — including black — and their site explains that the development team “developed a mechanism that closely mimics the complex movements of an animal’s tail” through a complex regimen of trial and error. “We observed an animal’s movements and designed a program to have them reproduced.”

“It has the healing power of pet animals,” they claim in a promotional video, adding that they found “meaningful reductions” in the stress levels of 38 volunteers tested — and that it continues responding for eight hours before it needs a recharge.

CNET’s Katie Collins was more impressed by Tombot’s animatronic golden Labrador puppy Jennie, noting it was created in collaboration with the Jim Henson Company and has 10 different motors — seven in its face. Collins wrote that the exhibit offered that rare CES phenomenon: “the kind of genuine excitement that causes eyes to light up and broad smiles to appear on people’s faces.”

Several CES exhibitors had ambitious plans to revolutionize one of the most basic of all human activities: getting from place to place.

CNN notes that eight years of development went into the still-impressive Manta5 Hydrofoil Bike, which lets you cycle across the water. It comes equipped with a waterproof battery and motor.

And then there was the Segway S-Pod — a kind of mobile chair. “Initial reactions from people who got a test spin were that it was fun and a lot easier than trying to balance on the original two-wheeler Segway,” reported CNN.

But the newest innovations may end up proving themselves in the service of already-established transportation companies. Delta Air Lines announced it invested in a “parallel reality” display sign which, according to Fast Company, can without any special glasses “show different things to different people at one time.” The technology involves specially-designed pixels radiating different colors in different directions.

Delta travelers who opt-in for the “beta experience” can see a nice uncluttered sign displaying an estimated departure and arrival time only for their own flight.

The magazine’s technology editor calls it “one of the most freakishly unexpected feats I’ve seen in years.”

And it’s coming sooner than you might think. Fast Company reports that it’s coming this year to Detroit’s Metropolitan Airport, so travelers who opt-in for the “beta experience” can see a nice uncluttered sign displaying an estimated departure and arrival time only for their own flight. Once passengers scan their boarding pass, cameras track their location for a special software that determines which information that passenger should be seeing — and where to display it.

That’s not the only cutting-edge technology that Delta is experimenting with. In his keynote, Delta’s CEO touted more ways the company is using cutting-edge technologies, according to ZDNet, including “exploring ways to leverage biometrics for faster boarding, new technologies to keep airline cabins clean and ways to leverage AI to maintain smooth operations through events like storms.” And the airline also demonstrated its use of a Sarcos Robotics exoskeleton to easily lift luggage weighing over 150 pounds.

The box featured below weighs over 150 lbs and the XO helped lift it with ease. #CES2020 pic.twitter.com/UzXdqO5C6I

As another sign of the times, there were also news reports about privacy announcements from Google, Facebook, Amazon, and Apple. “The more data leaks that occur, the more likely Apple is to talk about how great its privacy practices are,” quipped Engadget UK, pointing out that Apple’s senior director for global privacy was part of a discussion with privacy pundits from the FTC, Facebook and Procter & Gamble.

But in the end, there was still plenty of emphasis on the fun of consumer electronics, as hundreds of exhibitors searched for new ways to amaze us. The Washington Post created its own video roundup of “the coolest, the weirdest, gadgets of the future,” and at one point Jimmy Lee, the CEO of Prinker, even demonstrated a portable printer for (temporary) tattoos.

As Post technology reporter Heather Kelly watched the miraculous technology, Prinker printed two versions of the paper’s log onto her arms. And then he even created a temporary tattoo using the image of the Washington Post’s own technology editor.

It’s a remarkable demonstration of what may be the ultimate in customization. But maybe it’s also proof that in the end technology for consumers will always be driven by the most powerful juggernaut of all: the crazy and unpredictable whims of consumers.

And maybe it’s also a comforting affirmation of that truism that technology is destined to become whatever we humans choose to make of it.

Even if what we choose to make of it is headless robot cats.