Improvements in artificial intelligence and advances in robotic technologies have finally made performance-enhancing exoskeletons a reality. They're already being used to rehabilitate injuries, while other suits can now even offer superhuman strength.
Jan 13th, 2019 6:00am by David Cassel 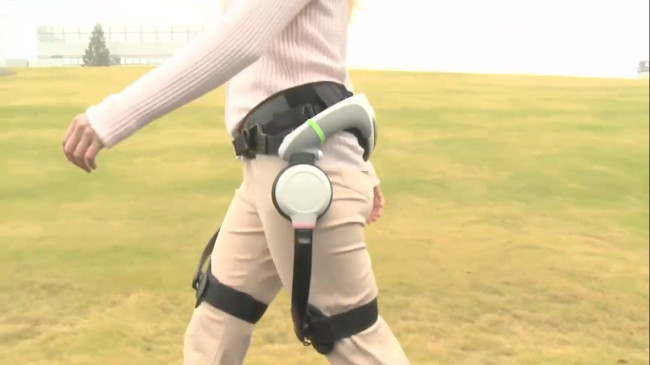 Improvements in artificial intelligence and advances in robotic technologies have finally made performance-enhancing exoskeletons a reality. They’re already being used to rehabilitate injuries, while other suits can now even offer superhuman strength.

Honda recently earned the right to sell its “Walking Assistant Device” in the U.S. after pre-clinical trials confirmed its usefulness in promoting neuromuscular recovery for “gait rehabilitation” after a stroke. It’s already in use at 250 facilities in Japan.

And Samsung also has a line of exoskeletons that they’ve dubbed the “Gait Enhancing and Motivation System,” which they demo’d at this year’s CES. TechCrunch reports the devices function as both a walking assistant and a source of resistance to improve strength and balance.

“Once you strap the thing on, it’s easy to forget that the exoskeleton is even there since it’s so light, and the robotic elements of it are understated,” reports Gizmodo. “There aren’t buttons or controls. You just walk, and the GEM-H makes walking easier.”

It’s not the only company making exoskeleton products, either for health and rehab or to physically assist workers. ReWalk and SuitX have each introduced “compelling” solutions, according to TechCrunch, along with several automotive companies. IEEE Spectrum also mentions Ekso Bionics, which manufactures exoskeletons that can be used by patients recovering from stroke and spinal cord injuries. One model even lets paraplegics walk, while another upper-body exoskeleton supports the arms of workers performing overhead tasks.

When people think of exoskeletons, they think of strength-enhancing power suits that let them fight like Iron Man, or fend off aliens (if you’re Sigourney Weaver in the 1986 movie “Aliens” — or in her 2007 ad for DirecTV ad.)

Fortunately, Sarcos has been working on powerful “wearable robotics technology” since the year 2000 and has finally left the agonizing “nearing production” phase. “We’re taking orders,” CEO Ben Wolff told IEEE Spectrum, saying it will be ready by the end of this year.

The company is offering full-body suits that the company promises can help their wearers lift nearly 200 pounds “repeatedly, without exertion, strain or injury.” And the company is also demo-ing a pair of remote-controlled arms that can lift up to 1,000 pounds.

It’s been a long road. Sarcos was founded in 1983, and from 2007 to 2014 became part of Raytheon’s “Integrated Defense Systems” group. Back in 2008, Sarcos beat 13 other firms for a contract for army tests as part of the U.S. Defense Advanced Research Projects Agency’s (DARPA) exoskeleton program, which according to the military official running the program was designed to eventually enable GIs to “run faster, leap further and carry more.”

In 2011, IEEE Spectrum reported on Sarcos’s efforts to improve performance, fine-tuning the high-pressure hydraulics, servo valves, and controllers, so that sensors at the joints — connected to distributed computer processors — could prompt actuators to fire up high-pressure hydraulics to deliver up to 200kg of force per square centimeter. The sensors detected the wearer’s motions, and then instantly matched their direction and speed, so that basically, “the person moves the way they normally would, and the exoskeleton keeps up,” explained Sarco’s Fraser Smith. “There is no external computation. Each joint has its own processing capability, and the joints communicate with each other.”

And its mighty arm could punch through a small stack of boards. In fact, their internal nickname for the project was “the Iron Man suit,” and Smith didn’t deny that they may have drawn some inspiration from comic books. “This is a company full of geeks — and proud of it!” he told IEEE Spectrum with a laugh, adding that “Most people here were very familiar with all those superheroes, although I’m partial to the early Iron Man comics with the guy dressed as a stove.”

In 2010, when the company unveiled its XOS 2 suit, it even brought in actor Clark Gregg, who plays S.H.I.E.L.D. agent Phil Coulson in Marvel’s “Iron Man” and “Avengers” movies, to test it out.

Of course, that was back in 2010, noted IEEE Spectrum, when “that bulky version kept the user tethered to the wall by a power cord — something that would presumably interfere with superhero activities — and the suit remained in R&D.” But today’s suits can run for eight hours off of a special battery — which can be quickly swapped out for a new (fully-recharged) one. And since then Sarcos has also found a way to make it cheaper to run exoskeletons, by delivering power to joints only when it’s needed (instead of continuously).

It took a lot of years — and a lot of help. In 2014 Sarcos was acquired by a consortium which in 2016 obtained some prominent additional funding from Caterpillar Ventures, GE Ventures, and Microsoft. “With more than 8 million people injured or killed on the job each year in the U.S. alone, there is substantial demand for robots that can carry out challenging tasks that are too dangerous or difficult for humans,” CEO Wolff said at the time.

Interestingly, General Electric itself spent six years working on one of the world’s first powered exoskeleton’s starting in 1965, according to Wikipedia’s entry on the Hardiman powered exoskeleton. One 1966 publicity reel describes it as part of their “man augmentation program” — a machine that “endows the man with the strength of a giant.

“The machine is not a mindless robot operated by remote-control instruments. It is an augmented man.”

Fast forward to 2019, and Sarcos is now calling its newest exoskeleton “the perfect synergy of man and machine,” promising their powerful robot suit “will revolutionize the way work gets done.” The company has even trademarked the phrase “Realizing the future of human potential.”

Video on Sarcos’s YouTube channel also showcases the company’s other “dextrous robotic systems,” including the powerful (and remotely operated) 7-foot robot arms of the Guardian GT, which can lift up to 1,000 pounds.

The system combines “human dexterity with superhuman strength and precision,” according to the Sarcos website, which notes that it has a four-foot reach, and can travel up to four miles per hour, powered by a diesel engine. “With the robotic arms acting as a natural extension of the operator’s real-world arm movements, minimal training is required”

For its wearable suits, Sarcos is offering a “robot as a service” package, according to IEEE Spectrum, which includes the exoskeleton, a docking station, and on-site maintenance, repair, and upgrade calls from Sarcos representatives. CEO Wolff argues it will cost the rough equivalent of a $25-an-hour employee so its starting price must be somewhere north of $52,000 a year. But he also believes that workers will see between a 4x and 8x improvement in productivity — and will be less likely to be injured.

But even back in 2010, the exciting potential of the technology was abundantly clear. One test engineer explained that when wearing the exoskeleton, “I don’t feel the strength, but I can pick up more.” In one Raytheon video, he explained that it didn’t make him feel like Iron Man. “I pretty much feel like myself, only stronger.”

“Of course, Iron Man and my lives are quite different. He lives in California mansion and drives fast cars, and I work in software and drive a minivan.”