Here’s the Artisanal Keyboard You Didn’t Know You Wanted 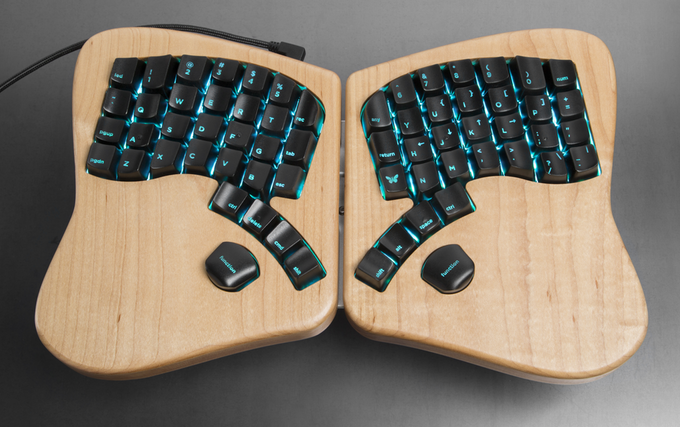 Keyboard.io has finally released some new information about its hotly anticipated “heirloom-grade” keyboard. This is a keyboard, the creators contend, built for “uncompromising typing.” It’s built on a hardwood maple base and features custom-sculpted LED-lit keys.

“After the second or third prototype, we started having trouble using our keyboards in public,” the founders remember, because “people kept interrupting us to ask where they could buy the keyboards we were using.”

The Model 1 design arranges the keys so that they are easier to reach for the fingers.

The project raised over $652,000 on Kickstarter – more than five times its original goal – with over 2,000 people pre-ordering the device. Since July, they’ve been “lining up” manufacturers, according to an October project update. It won’t be a simple project, creating this hardware. “Each keyboard needs to be individually milled and there are plenty of manufacturers who won’t even talk to us because we’re not using plastic.”

They’re still in negotiations, but they’ve also got more more clarity now on the future product’s specifications. Model 01 will boast comfortable “sculpted” keycaps which will trigger a mechanical (non-digital) key switch. They’ve decided to reduce the size of each key’s top, which will make them more comfortable and “dramatically” reduce the rate of typos, and they’re also adding a reversible USB port, and adjusting the position of the flashing LEDs.

The whole project has been a labor of love for Jesse Vincent, a former project manager for the Perl programming language and an enthusiast for open source projects. He created Request Tracker, an open source ticket-tracking system, and was the original author of the K-9 Mail, an e-mail client for Android devices. Vincent launched the project in 2014 with his wife Kaia Dekker, an MIT graduate and MBA with experience in investment banking and strategy consulting.

The crucial question they’re facing now is: when will their product first ship?

“As of this moment, we believe we are still on track for an April 2016 delivery,” read the new update on Kickstarter, “but we’ve definitely used up a lot of our engineering margin. Until we have a signed statement of work, we won’t have a firm realistic delivery date.”

“The engineering task list is longer than we’d like it to be at this point, but we’re moving at a good clip and it’s really important to us that we deliver you a good keyboard.”