Why You Should Build a Robot Using Node.js: Because You Can 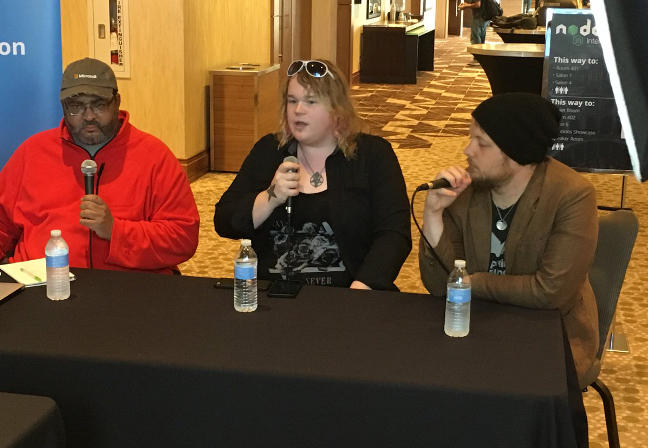 The most exciting part about the growth of Internet of Things is the creativity and entertainment brought about by making new things. It is only when we embrace the chaos and unbridled joy that comes with creating something that may or may not actually work that the best innovations come to life. This is a driving force behind projects such as NodeBots, a Node.js powered robotics community spanning the globe that brings people together to build their creations on Raspberry Pi’s, Arduinos, and other low-cost microcontrollers.

On the latest episode of The New Stack Makers podcast, we spoke with Salesforce Lead Developer Evangelist Emily Rose and Turing School of Software and Design Front-end Engineering Program Director Steve Kinney to explore how developers worldwide have come together via the NodeBots community to create things such a remote-controlled cat and a coffee roasting robot. TNS founder Alex Williams and industry veteran Darryl Taft conducted the interview at the Node.js Interactive 2016 conference:

Here’s Why You Should Build a Robot Using Node.JS: Because You Can

Kinney noted that as cost barriers continue to be removed from not only the JavaScript community but open source as a whole, there is interest in seeing what everyday hobbyists will begin to create as a result.

“It’s much easier and cheaper now to manufacture fairly powerful microcontrollers and systems-on-chips that are capable of running V8s or JavaScript or a similar language that used to be prohibited with resources. That coupled with JavaScripts being very accessible, I think that’s the two things that are powering this kind of rapid paced shift in how we’re approaching computing,” Rose added.

As one of the first people involved with NodeBots and a core NodeBots San Francisco GitHub contributor, Rose noted that NodeBots was a community effort from the start. One person “built a coffee roaster with a bread machine and a heat gun using Node.js,” said Rose. “I think at its core, it’s really about showing people that the barrier to entry is lower than even people that are familiar with this technology expect.”