Heroku is rolling out new features that will give users better insight into the services they’re running and offer tips on how to improve performance. The features have been out in beta but are now generally available. 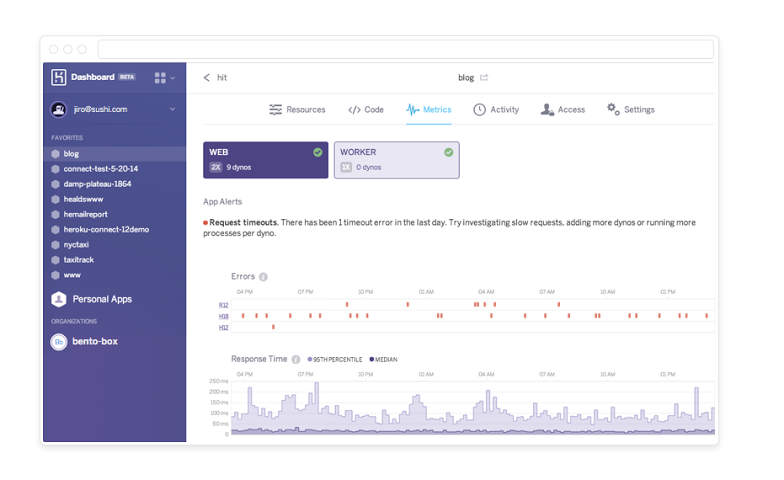 Response time is the one Heroku thinks is particularly valuable to developers, Adam Gross, vice president of products at Heroku said. Heroku shows users the median response time as well as the 95th percentile response time. These metrics show developers what the average user experience is like, he said.

But Heroku isn’t just presenting those metrics and letting users figure out what to do if, say, response time is slow. “We automatically provide recommendations about what you should do,” he said. In some cases, users will just need to add more resources. Other times, users might be advised to do some tuning to their app.

Heroku is also offering a set of services on top of its Postgres database service designed to offer them more insight. It can be challenging for database developers to pinpoint processes that are using more resources than they should, Gross said. They spend a lot of time identifying queries that take up the most I/O or are the most memory intensive, for instance. 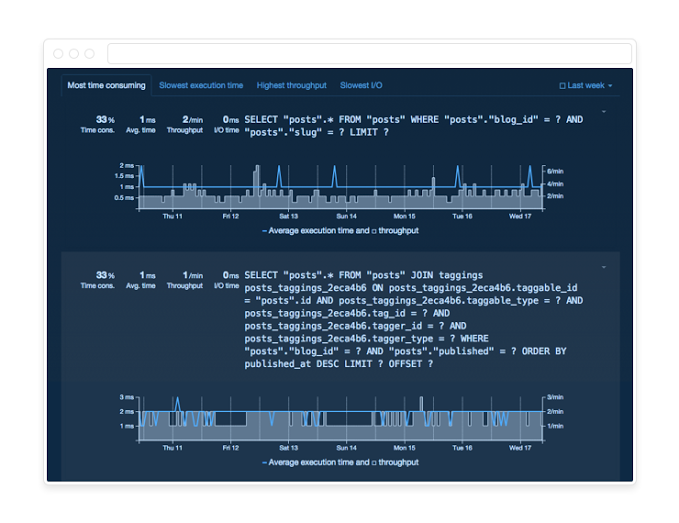 A screenshot of the Postgres metrics available from Heroku.

The Postgres metrics feature will highlight “hotspots” in the database so that developers can figure out that they can make a change to the SQL or a schema to improve performance, for example. “Answering which queries do I need to optimize is an elusive question,” Gross said. “We’re trying to make that as easy as possible. This stuff is possible today, it just requires real expertise in a database administrator and a whole bunch of tools to surface this data.”

In addition to the new metrics, Heroku is rolling out its revamped dashboard and talking up its “Deploy to Heroku Button.” The buttons, which Heroku introduced about a month ago, let businesses drop an icon on a Website to allow anyone to click it and instantly configure and instantiate a service on Heroku.

Developers including those at Uber, Twilio and DropBox have used the feature in 400 projects so far. Heroku is maintaining a directory where anyone can look for buttons that have already been created.

SHARE THIS STORY
RELATED STORIES
Why Trust and Autonomy Matter for Cloud Optimization Wix Tackles Application-Level Security with Custom Detector Install Minikube on Ubuntu Linux for Easy Kubernetes Development Data 2023 Outlook: Rethink the Modern Data Stack It Happened to Me: How I Suddenly Owed AWS $13,000...
SHARE THIS STORY
RELATED STORIES
How Jit Builds a Platform Engineering Mindset in the Cloud Why a Twitter Founding Engineer Is Now All-in on Mastodon PLG Will Eliminate the Subscription-Based Software Model It Doesn’t Matter How Much You Spend on AWS Wix Tackles Application-Level Security with Custom Detector
THE NEW STACK UPDATE A newsletter digest of the week’s most important stories & analyses.
The New stack does not sell your information or share it with unaffiliated third parties. By continuing, you agree to our Terms of Use and Privacy Policy.