Building a simulation of the human heart. Pooling and crunching data from public transportation and other sources from around the world to determine travel times between specific distances. These are two projects Alfonso Santiago, researcher at the Barcelona Supercomputing Center and Charlie Davies, co-founder, technology and product director, iGeolise; are actively engaged in building. What they share in common is how they derive immense high-performance computing (HPC) workloads on a cloud native platform (which Oracle offers).
Jun 18th, 2019 5:00pm by B. Cameron Gain 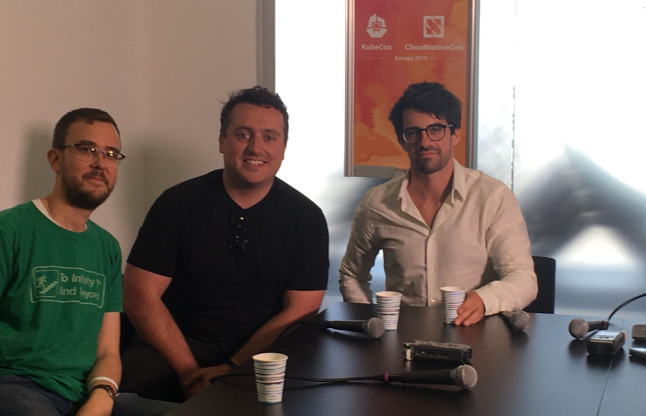 Building a simulation of the human heart. Pooling and crunching data from public transportation and other sources from around the world to determine travel times between specific distances. These are two projects Alfonso Santiago, researcher at the Barcelona Supercomputing Center and Charlie Davies, co-founder, technology and product director, iGeolise; are actively engaged in building. What they share in common is how they derive immense high-performance computing (HPC) workloads on a cloud native platform.

Santiago and Davies shared details about how HPC has helped to solve many of their respective projects’ struggles during a The New Stack Makers podcast hosted by Joab Jackson, managing editor, during KubeCon + CloudNativeCon in Barcelona. Also on hand was TJ Fontaine, a software engineer and consulting member of technical staff, for Oracle, who offered some context about Oracle’s role in these projects and in HPC on the cloud in general.

The Barcelona Supercomputing Center’s mission to simulate a human heart involves creating a model that reacts as a real human heart does. The resulting model is of immense use for clinical trials and medical device tests. While the concept is straightforward, the researchers faced two main problems:  the combination simulations are very difficult to configure since there are literally thousands of variable to consider and the computing costs of the simulation in order to require about two hours for a single execution, Santiago said.

“Not everybody has these type of resources on their offices, so what we’re trying to do is to tackle this problem with Oracle Cloud by trying to democratize this tool and make it available for people that didn’t have these type of tools,” Santiago said.

The human heart model is accessed through the Barcelona Supercomputing Center’s frontend web application where the executions are configured in a “very clinician-friendly way” so researchers do not have to manage the numerically complex variables that the HPC takes into account parameters and only have to input the data they want to test.

In the near future, Santiago said his team plans to port the model on a Kubernetes platform to simulate multiple hearts. “If you need to run 10,000 of different patient trials, you need an efficient and smart workload manager,” Santiago said.

Kubernetes and a container structure could also help to add redundancy to the HPC-powered human heart simulation, due to the independent structure of the different containers, Santiago said. This built-in redundant allows thousands of other executions to be performed in the event of a single node failure, for example.

While Davies self-mockingly said his project is “nothing as fascinating as reproducing the human heart,” he did say determining travel times for travelers also requires HPC for “some pretty heavy lifting computation and data.”

Davies described how iGeolise has created a way to search Maps Data and the world around us by time instead of by distance. For example, users can use the application to determine where they can go in half an hour by public transportation, driving, walking or cycling or all of those combined, in over 35 plus countries. These datasets are by no means static and require calculating travel times based on ever-changing variables within different cities worldwide in over 35 countries.

Considering how iGeolise is very short-staffed, Davies said the firm’s business model is heavily reliant on the combined computing power HPC offers and the versatility of a cloud and Kubernetes platform. “On a shoestring startup, we had to the data and determine to refresh it in such a way that we can put it back onto our runtime servers and have everything available,” Davies said. “And the code that we were [initially] running was really quite bad.”

Thanks to its HPC-powered application running on the cloud, Davies said the iGeolise platform can now pool and crunch data in about eight hours, several times a day now, instead of waiting for over two weeks,” Davies said. “And so that actually enables the business model.”

3:19: What is the transition like and what are the benefits to High-Performance Computing on Oracle Cloud?
5:26: Did that involve software designed initially for HPC?
15:53: The democratization of HPC workloads.
20:55: What is the preferred configuration for HPC-style jobs?
26:57: The balance of making code more efficient, data more efficient, and optimizing code to make memory more efficient.
31:27: The problem of what to do with data that is sensitive.