How Allies Can Help Women in Tech 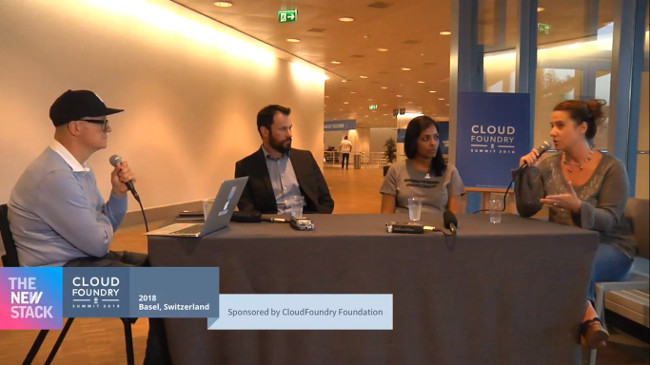 The Cloud Foundry sponsored this podcast.

How Allies Can Help Women In Tech

The state of gender diversity has a long way to go before it can reach acceptable levels in tech — as well as in society in general. The positive news is that there is a strong undercurrent of players who are striving to make a difference.

Initiatives created to help bring about positive change was one of the main topics discussed during a podcast hosted earlier this month by Alex Williams, founder and editor-in-chief of The New Stack during Cloud Foundry Summit Europe 2018 in Basel, Switzerland. Jennifer Cloer, founder of and lead consultant for THINKit PR, creator and executive producer for The Chasing Grace Project and co-founder of Wicked Flick Productions;  Swarna Podila, senior director, community, for the Cloud Foundry Foundation, and Steve Greenberg, founder of Resilient Scale, were the podcast guests on hand who spoke about their experiences and projects devoted to improved diversity.

A common question is what people, especially those in a position of privilege, can do to help promote gender diversity in tech. Cloer said the answer really depends on the women you ask about how “they want men to show up to support them in the workplace.”

Cloer said she couldn’t “answer for all women,” said many women are ready to communicate “what our needs are as a marginalized group.”

Positive change is happening, Cloer said. “There’s been an evolution I think of the role of male allies in the tech community, at least in the women in tech community over the last 10 years,” Cloer said.

Podila agreed that allies can be very helpful. “Allies could be behind the scenes and provide the support or sometimes can actively be the support based on what is necessary for that situation or for that person. But without that kind of support, I would have not been here,” Podila said. “So, I think I can speak for pretty much all, not just females or all the characters that you described… I think it goes for everyone where if someone is struggling, they need support.”

While fly fishing is certainly not an activity one readily associates with tech, Greenberg said he was “inspired” by the  50/50 On the Water campaign and the accompanying documentary film, created by sportswear maker Orvis, as he gave his keynote at Cloud Foundry Europe. The idea of the campaign is to promote diversity in fly fishing while serving as a model for what society can achieve. “I think [50/50 On the Water] extends beyond tech,” Greenberg said.

However, Greenberg said, unfortunately, there is a “whole class of people out there that we were never going to reach.”

“But I think there’s a whole class of us that are sitting here just disgusted by what’s happening in our industry, in the world and obviously on the river as well because it’s not fair. It’s not right,” Greenberg said.

Nevertheless, Greenberg also said he had received a lot of encouragement to promote gender diversity. “We don’t [necessarily] know what to do but we want to do something,” Greenberg said.

2:24: Exploring the 50/50 campaign.
3:30: How can those who are in positions of privilege help those who are marginalized in the tech industry, while still allowing for them to speak to their own lived experiences?
8:20: How to bring diverse audiences into your meetup or event.
13:07: In open source, who are the maintainers and what role do they play as allies?
17:24: “Allies exist everywhere,” and episode two of the Chasing Grace Project.
18:39: How can you make allyship tangible in tech?