How Drupal Fits Into an Increasingly Headless CMS World

Drupal creator Dries Buytaert talks about his company's new headless starter kit, and his thoughts on competing with WordPress in headless.
Oct 26th, 2022 7:00am by Richard MacManus 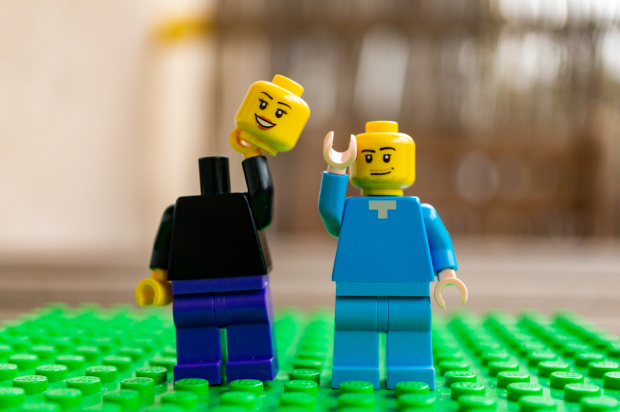 Headless content management systems have turned the traditionally staid CMS market on its head over the past few years. In a headless CMS, the frontend (aka the head; meaning presentation and publishing) is decoupled from the backend (the content) and managed outside of the core system. WordPress vendors like WP Engine now put headless offerings front and center on their websites. Even Automattic, the company spun out of the open source WordPress product, has a headless CMS offering — despite the initial reluctance of its founder, Matt Mullenweg, to embrace the trend.

Not to be outdone, long-time WordPress competitor Drupal has plenty to say on headless too. I spoke to Drupal creator Dries Buytaert about his company Acquia’s new “open source, headless starter kit,” announced today as a part of the Drupal-based Acquia CMS.

Buytaert has been giving advice about decoupling Drupal since 2016, so he has some strong takes on when and how to use the headless approach.

Right up front, he acknowledges the tradeoffs involved in choosing a headless CMS. “Headless often is great for developers,” he told me, “but it comes at a cost for the business person or the marketer. […] I see a lot of digital agencies really push for headless when it’s actually not in the customer’s benefit.”

He thinks agencies choose headless sometimes so that their developers can use the latest JavaScript frameworks, but he warns this can mean content creators “losing capabilities like previews, in-context editing, the ability to layout pages — all of these things are not always available in headless CMS.”

The main benefit of the “Acquia CMS Headless Starter Kit,” according to the press release, is to enable organizations “to deliver content to more than just a traditional web browser.” Examples cited include digital signage, wearable devices, chatbots, mobile applications, and kiosks (I had to google the latter to make sure this product category still exists; but sure enough, think of the self-serve screen at your local cinema that allows you to purchase tickets). 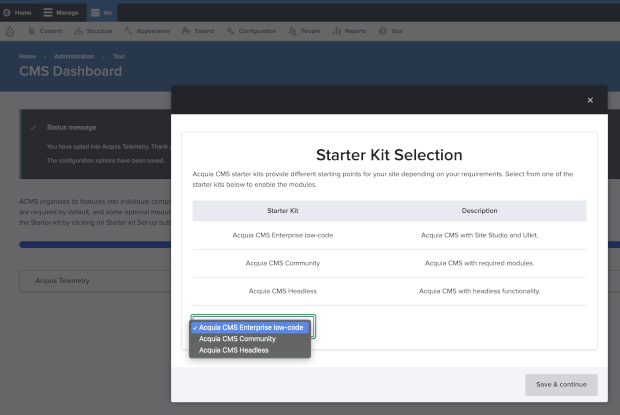 Alongside the headless kit, Acquia also released a Next.js Starter Kit, “to help accelerate the build of frontend applications that display content created in the headless CMS.”

Buytaert told me that large customers of Acquia often use a hybrid approach, using both the traditional Drupal software and headless APIs.

“We see that [hybrid] is very important for larger organizations because they have a lot of different sites,” he said. “And each of the sites tends to be very different. […] Some are templated, some are very bespoke, some [sites] have engineering teams, some have only marketing teams to work on them. And, so often if you talk to larger organizations that have a diverse portfolio of websites, they need to be able to mix and match these different architectural approaches.”

Drupal vs. WordPress in Headless

Drupal was created back in 2001, before even WordPress (which was launched a couple of years after). It has always positioned itself as a more powerful CMS than WordPress, meaning that it targets developers as well as content creators. Drupal currently says it wants to appeal to “ambitious site builders,” which Buytaert has defined as the middle ground between developers and content creators. So I asked him how “ambitious site builders” tend to use headless?

“We see people use it for a variety of different things,” he replied. “Sometimes because they want to use their JavaScript frameworks of choice, but we also have customers that have done integrations with AR [Augmented Reality] solutions, or chatbots, or voice assistance. It’s not just for creating different traditional websites, it’s also for creating other kinds of applications.”

How then does Drupal’s approach to headless differ from WordPress, I asked?

“My understanding is that it’s a little bit more bolted on in WordPress,” he said, “whereas the approach we’ve taken in Drupal is to re-write Drupal’s core system, almost like an open heart surgery.”

He explained that there is a basic version of Drupal, called “Drupal Core,” which “comes with all of these headless capabilities out of the box.” He said that those headless capabilities are not “bolted on” and presented as an alternative to the traditional Drupal CMS. Rather, their approach has been to make headless “part of the core of the platform.”

He added that he doesn’t know for sure how WordPress does headless, “but last time I checked it was more of a plugin that you could install — it wasn’t as a native to WordPress as it is to Drupal.”

How Drupal compares to the pure headless CMS companies, such as Strapi and Contentful, is more nuanced. I’ve written before that the pure play headless solutions tend to have poor support for content creators; they’re simply not as easy to use as the likes of Drupal or WordPress. Buytaert thinks they may end up converging with what his company Acquia now offers.

“We have moved into headless and adopted a lot of the headless ideas into Drupal, but vice versa, I feel like the pure headless solutions are probably moving towards Drupal too — because they’re trying to figure out how to do previews, how to do layouts, how to do in-context editing. […] And so, in my mind, they are going to add all of these features into future versions [of their products] and in the end, it’s almost like things will converge.”

Another website creation trend that has taken the developer world by storm these past several years is Jamstack. The “jam” in Jamstack refers to JavaScript, APIs and Markup; the “stack” part refers to cloud computing technologies. I asked Buytaert how Drupal fits into the Jamstack pattern promoted by companies like Netlify and Gatsby.

“Gatsby was actually created by two Drupal developers,” he replied, adding that “Drupal was the first content platform that Gatsby supported.” In terms of the core functionality of Jamstack, which involves creating static sites that utilize CDNs (content delivery networks), he simply noted that 15-20 years ago “we were generating static pages — it was always a feature that Drupal was able to do.” He noted that there are Drupal modules (its term for plugins) that add static site generator (SSG) functionality to Drupal.

Despite that, he acknowledged that Jamstack has introduced some unique innovation to website creation.

“​​What is new is some of the approaches that some of the Jamstack solutions use, like the developer workflows, are slightly different and new — there’s some great innovation happening in that world, don’t get me wrong, but we’re kind of riffing on old concepts as well.”

Even though Drupal is a more technical CMS platform than usual and is targeted mainly to developers, Buytaert says it is “important not to leave the marketers and the content creators behind.” Especially given the now 22-year history that Drupal has on the web, he feels that creating websites shouldn’t just be the domain of web developers with their fancy JavaScript frameworks.

Richard MacManus is a Senior Editor at The New Stack and writes about web and application development trends. Previously he founded ReadWriteWeb in 2003 and built it into one of the world’s most influential technology news sites. From the early...
Read more from Richard MacManus
SHARE THIS STORY
RELATED STORIES
Kelsey Hightower on Software Minimalism and JS Frameworks Accessibility Is Just Another Functional Test How Instagram Prepared for High Definition Video Microsoft Aims to Bring DevOps Discipline to Web3 Developers Get a Quick-Start to Coding with Replit IDE
TNS owner Insight Partners is an investor in: Automattic.
SHARE THIS STORY
RELATED STORIES
Survey Finds Majority of Jamstack Community Testing Edge Low Code vs. No Code Cloud Lessons to Help Developers Improve ESG Impact How Web Tech Got This Way and How It May Evolve in the Future Developers Get a Quick-Start to Coding with Replit IDE
THE NEW STACK UPDATE A newsletter digest of the week’s most important stories & analyses.
The New stack does not sell your information or share it with unaffiliated third parties. By continuing, you agree to our Terms of Use and Privacy Policy.