It's not just about breaking down silos between tech teams, said panel members at LeadDev Live, but about improving communication with legal, marketing, product, and customer support.
Oct 6th, 2021 7:47am by Jennifer Riggins 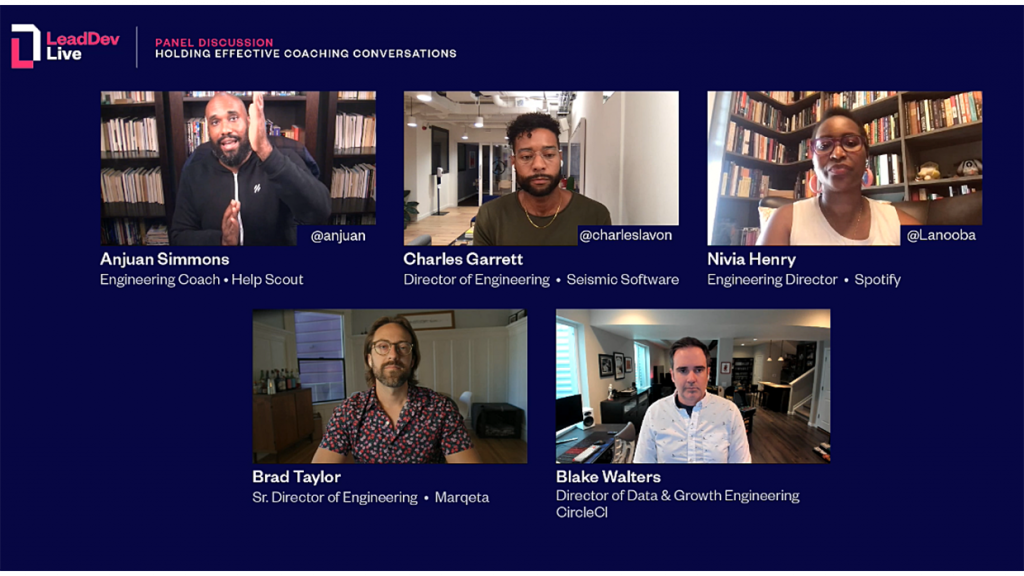 What is cross-functional collaboration? Contrary to its DevOps origins, it’s not just about breaking down silos between technical teams. It’s about enabling communication vertically through hierarchies and horizontally across even non-technical departments, including legal, marketing, accounting, and customer support.

We could add security to that mix, but it’s clear that, even if your teams aren’t cross-functional, security has to be integral to all development. And it should be obvious by now diversity, equity and inclusion will only work when implemented across all tiers and teams.

So how do you go from dysfunctional to cross-functional? How do you cultivate effective relationships with other teams? At September’s LeadDev Live, a panel of engineering leaders came together to discuss how they do just that.

Start by Finding a Common Language

The first step to starting a cross-functional conversation is just that — a conversation. Even if nothing’s going on, Charles Garrett, director of engineering at Seismic Software, has weekly half-hour sync-ups with his counterpart in product.

“Try to find a common goal — a softball conversation — so it doesn’t feel like a transactional exchange,” Garrett said. “Learn their pressures and understand how it’s influencing their behaviors.”

Nivia Henry told fellow panelists that she looks at her role as a “clarity bridger and partner modeler,” responsible for setting the tone for the whole organization, pushing back against infighting. Her role as engineering director at Spotify Ads has her partnering with each different group — like consumer, marketing and content — to look for ways to enable and monetize.

“You will find points of compromise. Sometimes you will lose, but the organization will win,” she said.

The moderator, Anjuan Simmons echoed this, saying that what separates a high-trust leader from a micromanager is their ability to absorb chaos and to spread clarity. He says it’s a leader’s job to ask how to unblock other teams so they can accomplish things for the common good.

It comes down to uncovering motivation and then speaking to that motivation with their own language. Sales often speak in quarters, while developers think in story points or sprints.

“I find that if I can understand their language and what motivates them then I’m really enabled to be that person who can really speak to them and translate what my teams are doing so they understand where we’re going,” said Simmons, engineering coach at Help Scout.

Especially at the director and senior leadership levels, he says, you’re an example of communication that filters down, echoed Blake Walters, director of core growth and product for CircleCI.

“We can almost provide them a cheat sheet of, this is the sales culture, this is the marketing or product culture, and how you might be able to use that understanding, not to subvert the system, not to get what we want and make sure that they don’t get what they want,” said Walters, whose role finds him working with revenue, go-to-market and product teams as well as engineering.

“It’s not Us versus Them, but to at least accelerate the amount of time that you get to that common ground, towards whatever that common goal is.”

Not All Teams Are Created Equal

Uncovering common ground doesn’t mean that each team has an equal say.

Spotify is a product-led organization with more than 2,100 engineers, where there’s no achievable path without the product team’s buy-in. Henry says that everyone knows that any cross-functional appeal has to support that product-led strategy.

For managers, there’s a tendency to see your first team as your direct reports, she pointed out. In terms of who to support and care for, this is correct.

“But your first team is who you peer up with and hold accountable for business outcomes,” she said. “Together we are peers and supporters of that business vision. Everyone else cascades that behavior, and that mitigates some of those silos that people run into between functional roles.”

“I’m sure there’s lots of folks … who either have sales staff that say, ‘Oh, we’re going to have to take this to engineering and they’re gonna hate this.’ Or engineers that see the sales folks coming and go, ‘Oh, no, it’s the sales folks.’ That should not be the first interaction that you all have.”

Engineering comes with a lot of advantages already, as executors of the company vision. Henry told the LeadDev audience that she needs to go out of the way to include her product, design and data peers, so that everyone feels an equal part of achieving that vision.

In order to resist that power imbalance at Spotify, the company intentionally limits the amount of engineering activities that don’t also include other roles. While the organization has moved away from its own Spotify Model, it still mixes up the teams whenever possible to make them cross-functional.

Another relationship ripe for a power struggle can be sales and engineering.

“I’m sure there’s lots of folks out there and in this room who either have sales staff that say, ‘Oh, we’re going to have to take this to engineering and they’re gonna hate this.’ Or engineers that see the sales folks coming and go, ‘Oh, no, it’s the sales folks.’ That should not be the first interaction that you all have,” Walters said.

Making cross-functional collaboration work involves right-sizing work and shipping small and iteratively, in order to deliver value that the sales team can provide.

Putting the Customer at the Center

Relationships with product teams are essential, said Brad Taylor, senior director of engineering at Marqueta. But while product is usually the final decision maker, the whole cross-functional leadership owns the key metrics and output.

“Engineering, product, design, anyone else in the group, maybe it’s regulatory, we’re all together on this, aligned in delivering the best product for our customer.” If the goal is to have more users, Taylor continued, they need to make sure legal is onboard early.

For engineers, however, code speaks often louder than the voice of the customer, he said. It’s the job of management to constantly connect the code back to the people it’s being built for. “There are customers out there who pay us money to make this code, right? And so having their voice really paramount and top of mind is essential.”

The mission of Walters’ engineering/product partnership at CircleCI, he said, is to stop putting up roadblocks, claiming things are impossible.

“We should be leveling up the product manager to think beyond what they think the capability of the current team is and leverage that product manager’s subject matter expertise to level up the team to get them to stretch to accomplish things that maybe six or 12 months ago they didn’t think was possible,” Walters said.

That means engineering leadership has to be present at project meetings and sprint planning, he said, to create a unified voice between the two teams.

It’s about modeling the type of communication and behavior you want your engineers to use, Garrett said: “Give people their flowers.” For example, he finds customer support often embellishes and provides really good asynchronous details on Jira, so he will call that out and give thanks

“I believe that there is no such thing as a neutral interaction, professionally or personally,” Garrett said. “When you engage or interact with someone, you either leave them off a little bit better or a little bit worse. So, just make an effort in a genuine way,”

No one in the 45-minute panel mentioned any tool or technology. Cross-functional relationships are nurtured through a lot of people skills spread across departments.

“Lead with empathy,” Walters advised. “Do your best to understand where someone is coming from. Come with an open heart. And they’ll help you later.”

Jennifer Riggins is a culture side of tech storyteller, journalist, writer, and event and podcast host, helping to share the stories where culture and technology collide and to translate the impact of the tech we are building. She has been...
Read more from Jennifer Riggins
SHARE THIS STORY
RELATED STORIES
How to Get Started Filling 3.4 Million Cybersecurity Jobs Entrepreneurship for Engineers: Avoiding Feature Bloat The Power and Ethical Dilemma of AI Image Generation Models Golden Paths Start with a Shift Left CES 2023: Robots, Astronauts, Schwarzenegger and Flying Cars
CircleCI is a sponsor of The New Stack.
SHARE THIS STORY
RELATED STORIES
Entrepreneurship for Engineers: Avoiding Feature Bloat How Jit Builds a Platform Engineering Mindset in the Cloud It Happened to Me: How I Suddenly Owed AWS $13,000... 2022 in Review: AI, IT Armies, and Poems about Food 5 Ways ChatGPT Could Supercharge Chatbots
THE NEW STACK UPDATE A newsletter digest of the week’s most important stories & analyses.
The New stack does not sell your information or share it with unaffiliated third parties. By continuing, you agree to our Terms of Use and Privacy Policy.