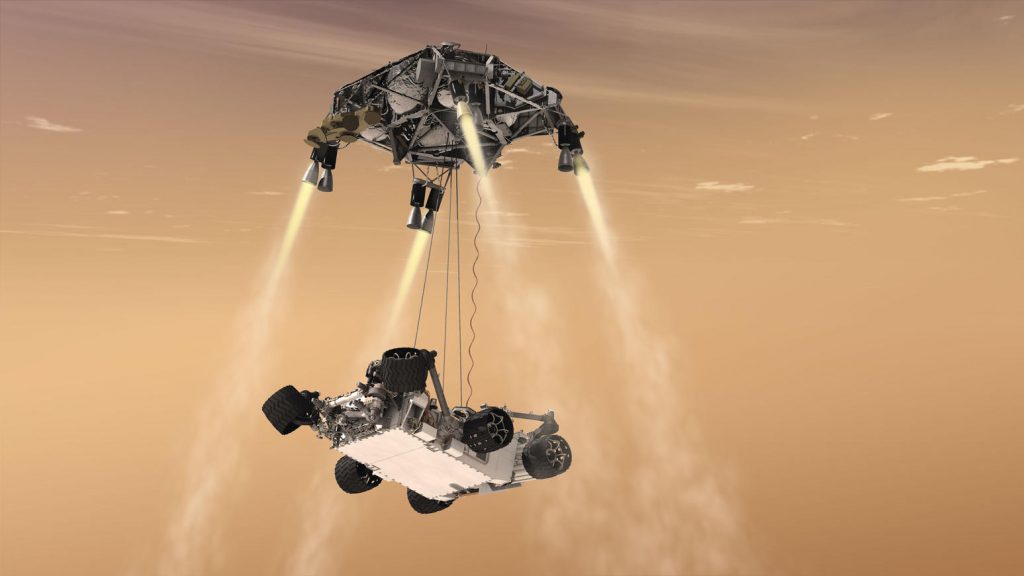 Outer space has always provided humankind with the ultimate challenge: can we use our best technologies to unlock the secrets of our own galaxy? Confronting distances on a near-infinite scale requires remote operations across millions of miles, using limited hardware resources in the most punishing of environments.

But NASA and its collaborators haven’t stopped wondering — and they’re now assembling and testing their newest collection of instruments to deploy 39 million miles away on the surface of Mars. They’re sharing those preparations online, with both curious people around the world and the next generations of knowledge-seekers.

And NASA is describing it as “the first mission to look for signs of past life on the Red Planet.”

So what happens when our ambition meets our curiosity? Somewhere in La Cañada Flintridge, California, the “Mars 2020” rover has completed its final driving test at NASA’s Jet Propulsion Lab. The rover’s next stop will be Cape Canaveral, Florida, where NASA’s “Launch Services Program” at the Kennedy Space Center will help it honor its ambitious itinerary:

A 19-day launch window begins on July 17 for the custom spacecraft carrying the rover, according to the nonprofit Planetary Society. The small craft will spend seven months travelling from earth to Mars — but its fateful 216-day flight has been a long time coming.

NASA has a whole web page dedicated to past missions that have landed a rover on Mars over the last 44 years. There’s Viking 1 and 2 (1975), Pathfinder (1997), Polar Lander (1999), Spirit and Rover (2004), Phoenix (2008), Curiosity (2012), and InSight (2018). And the Planetary Society notes that satellites orbiting Mars have now sent thousands of terabits of data back to earth. “We now have a continuous weather record dating back to 1997. We know Mars’ atmosphere very well—its composition, pressure, temperature, and how these vary with the seasons.”

But this Mars rover will touch down in a 28 mile-wide crater, in a carefully-selected site that NASA describes as “what may be one of the best places to look for signs of ancient life.” 3.5 billion years ago there was a lake there as well as an ancient river delta, and there’s still deposits of the mineral carbonate, “tracing Jezero’s shoreline like a bathtub ring.”

“An ancient lake is a fantastic place to pursue our goal of looking for possible Martian life,” explains one NASA video. “On earth, lakes are filled with living creatures. Evidence of that life is often preserved in the mud and sand deposited on the bottom of the lake. So we use the rover’s instruments to explore the rocks of the ancient lake bed.”

For the first time ever, this rover will also be carrying a new drill “that can collect core samples of the most promising rocks and soils,” explains one NASA page, “and set them aside in a ‘cache’ on the surface of Mars.”

This is the only known site on Mars with both carbonate and the geological features of a past lake, according to one recent paper in the planetary science journal Icarus. And NASA’s press release also notes that their earlier rover Curiosity has already discovered hints that microbial life could’ve existed on Mars billions of years ago. “Mars 2020 will search for actual signs of past microbial life, taking rock core samples that will be deposited in metal tubes on the Martian surface.” NASA’s “Sample Caching System” uses 17 different motors, and the samples will be “rigorously documented and returnable.”

The Planetary Society notes there’s already been discussions between NASA and the European Space Agency about how to retrieve those samples — with one idea involving a launch in 2026 and a return of the samples in 2031. “A surface-retrieval lander would deploy a sample fetch rover that would spend 6 months collecting the samples and loading them into a basketball-sized sample canister launched by a rocket from the lander deck,” writes the director of the Payload and Space Science Department at Spain’s INTA space agency. “A sample-return orbiter would rendezvous with the canister in Mars orbit and return it to Earth.”

The rover will also carry a small (3-kilogram) ground-penetrating radar that can search for water or ice buried below the dry martian surface — the first time NASA has sent a radar tool to Mars. “No one knows what lies beneath the surface of Mars,” says Svein-Erik Hamran, the Principal Investigator on the team for the Radar Imager for Mars’ Subsurface Experiment (or “RIMFAX”). “Now, we’ll finally be able to see what’s there,” he explains on NASA’s official page for the radar imager.

But that’s not the only way this 2020 rover will pave the way for future expeditions. In fact, NASA has explicitly stated that this rover’s scientific mission will contribute “to the preparation for human exploration of Mars.” Specifically, it will test whether In-Situ Resource Utilization technology can generate consumable oxygen (and/or propellant) from the Martian atmosphere (which is 96% carbon dioxide).

Last February in a desert somewhere in the southwestern U.S., the project team simulated the view from Mars in a collaboration with scientists scattered around the world to practice how they’d process the pictures and other data from the rover, according to a blog post by the Principal Professional Scientist for Johns Hopkins University Applied Physics Laboratory.

“A few stalwart gray-beards went as far back as the Viking missions of the late 1970s.”

And then in December NASA announced the rover “passed its first driving test” as the equipment “rolled forward and backward and pirouetted in a clean room at NASA’s Jet Propulsion Laboratory in Pasadena, California. Or, as project manager John McNamee puts it, “A rover needs to roll…”

“We can’t wait to put some red Martian dirt under its wheels.”

Here's the 10-hour-plus test in just one minute. https://t.co/8ONp247jpx pic.twitter.com/6TtfGImIYm

Video of the testing gives a sense of the size of the rover. It’s nearly 10 feet long and over seven feet tall — so “roughly the size of a compact car,” explains a page on the Planetary Society site. But it weighs about 2315 pounds — or “less than a compact car” (by about 660 pounds). When fully extended its robotic arm stretches nearly seven feet. There’s even a microphone recording the sounds of the landing that “might also capture sounds of the rover at work, which would provide engineers with clues about the rover’s health and operations.” 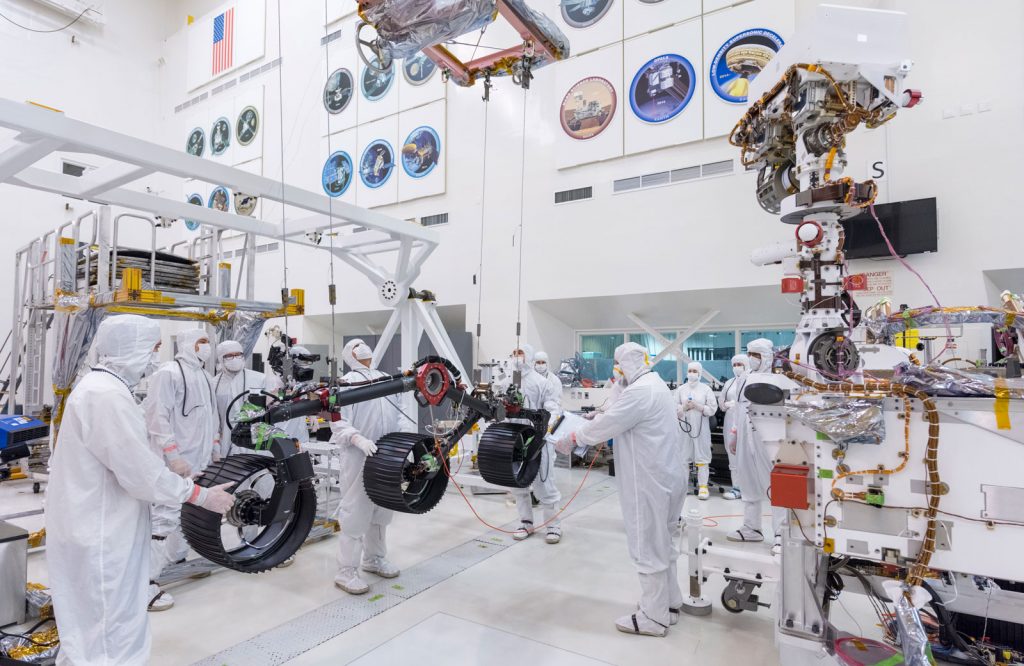 The rover’s laboratory has been the scene for months of intense study. There’s even a livestream from NASA’s Jet Propulsion Laboratory with regularly-scheduled sessions where they answer any and all questions. (The next one is Monday at 11 a.m. PST)

Soon the rover will be getting packed up to go to @NASAKennedy to prepare for launch this July. pic.twitter.com/UxR0XYxfm3

NASA points out how it’s different than previous rovers. The 2020 rover’s auto-navigation software will make more of its own driving decisions than any previous rover on Mars. Its high-resolution, wide-view navigations cameras will deliver data to what NASA calls “an extra computer ‘brain’ for processing images and making maps,” always carefully avoiding tilting more than 30 degrees

In fact, this rover is carrying an entirely new set of scientific instruments, including a Mastcam-Z camera system that besides zooming in can also take pictures in color, stereo, 3D, according to the Planetary Society. As one of the camera’s education and public outreach partners, they write that the camera should deliver “stunning color images of the surface” — and includes several filters to help it study the martian geology. There’s an X-ray fluorescence spectrometer and imager, plus a separate Raman spectrometer and imager which can probe the chemical composition of samples.

And the as-of-yet named Mars rover will also deliver a tiny helicopter for experimental flight tests.

We’re down to the top nine finalists! Help us name the #Mars2020 rover by telling us your favorite. Cast your vote soon—the public poll closes on Jan. 26: https://t.co/RlWIK1UN3N pic.twitter.com/GxFaId03Vd

In fact, during the lander’s first 90 days on Mars, it will carry around the helicopter, until it finally lowers it gently to the ground, and then drives away to give it a clear flight path. The rover will help by measuring the wind and atmospheric conditions, as well as ultimately relaying the initial commands from NASA’s earthbound engineers to the helicopter (and receiving back its transmissions of images and other information). But transmissions from earth can take at least four minutes to arrive — or as long as 21 minutes, depending on how far apart the planets have drifted in their orbits. So the helicopter will have to make its own decisions about where to land, based on an analysis by its on-board systems of the terrain below.

NASA describes it as a “little flying robot.”

But it’s facing challenges never faced by any flying robot before. The four-pound, softball-sized cube has stiff four-foot blades and a super-speedy rotor that are specially adapted for the thin Martian atmosphere. “At 2,800 rotations per minute, it will spin about 10 times faster than an Earth helicopter…” explains a NASA blog post. “Over a 30-day period on Mars, the helicopter will attempt up to five flights, each time going farther than the last.”

It will carry a small 13-megapixel camera — “the same type commonly found in smartphones today.”

The post notes that Joe Melko, the project’s deputy chief engineer, says they had to invent a way to test the helicopter on earth. They designed, built and tested a series of prototypes, often flying them in a JPL simulator of the atmosphere of Mars or in a cold chamber simulating its -130 degree nights. Most of the energy from the helicopter’s solar array will be used just to keep it warm at night. They even performed radiation tests, and “More tests are coming to see how it performs with Mars-like winds and other conditions.”

In NASA’s blog post, Bob Balaram, JPL’s chief engineer for the project, says this mini-helicopter could become the forerunner for a much wider exploration of the planet.

“Someday, if we send astronauts, these could be the eyes of the astronauts across Mars.”

SHARE THIS STORY
RELATED STORIES
The Graph of Life in a Post-Relational World Hacks to Help Open Source Leadership Support Inclusion Tackling 3 Misconceptions to Mitigate Employee Burnout SANS Survey Shows DevSecOps Is Shifting Left  What Is a Sociotechnical Knowledge Map and Why You Should Care
SHARE THIS STORY
RELATED STORIES
Case Study: How Dell Technologies Is Building a DevRel Team It's No Longer about How You Write Code but How You Operate It Fear and Layoffs: How to Cope with Tech’s Uncertain Times Low-Code Tools Improve Devs' Work-Life Balance, Survey Finds Tackling 3 Misconceptions to Mitigate Employee Burnout
THE NEW STACK UPDATE A newsletter digest of the week’s most important stories & analyses.
The New stack does not sell your information or share it with unaffiliated third parties. By continuing, you agree to our Terms of Use and Privacy Policy.