We’re coming to the point where levels of open source use are relatively similar across different industries. Across a range of verticals, businesses are increasingly developing the same cloud native  and open source as practices as software industry leaders. Yet, there is still significant variation in how industry verticals have adopted specific policies meant to promote and support open source.
Jan 23rd, 2020 10:27am by Lawrence E Hecht 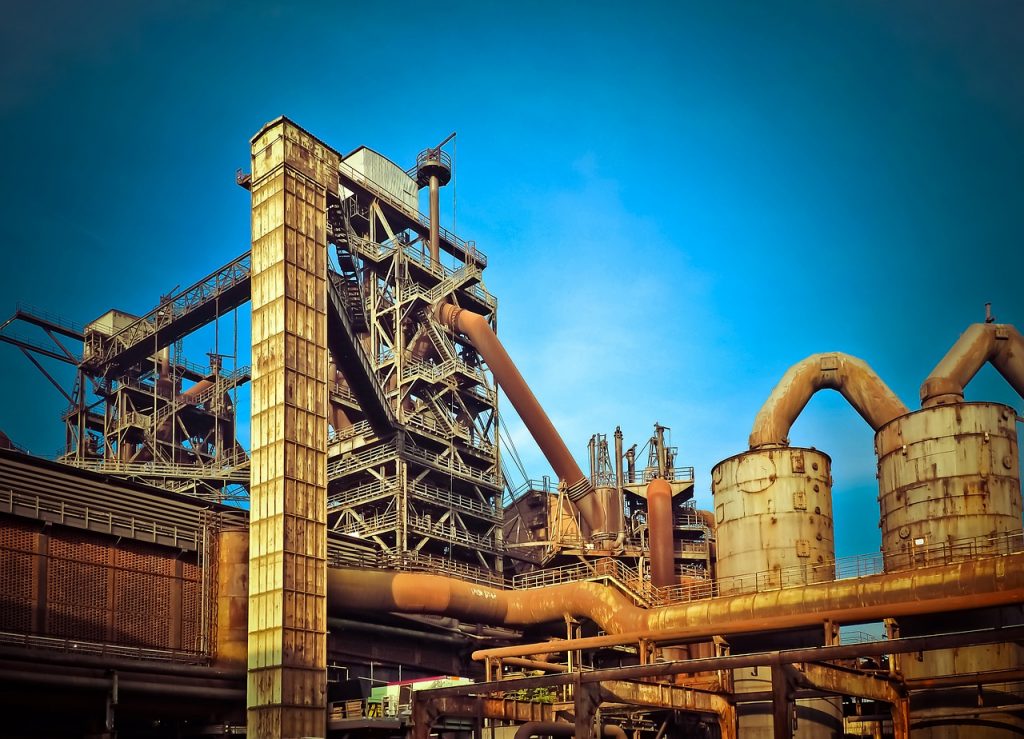 We’re coming to the point where levels of open source use are relatively similar across different industries. Across a range of verticals, businesses are increasingly developing the same cloud native and open source as practices as software industry leaders. Yet, there is still significant variation in how industry verticals have adopted specific policies meant to promote and support open source. 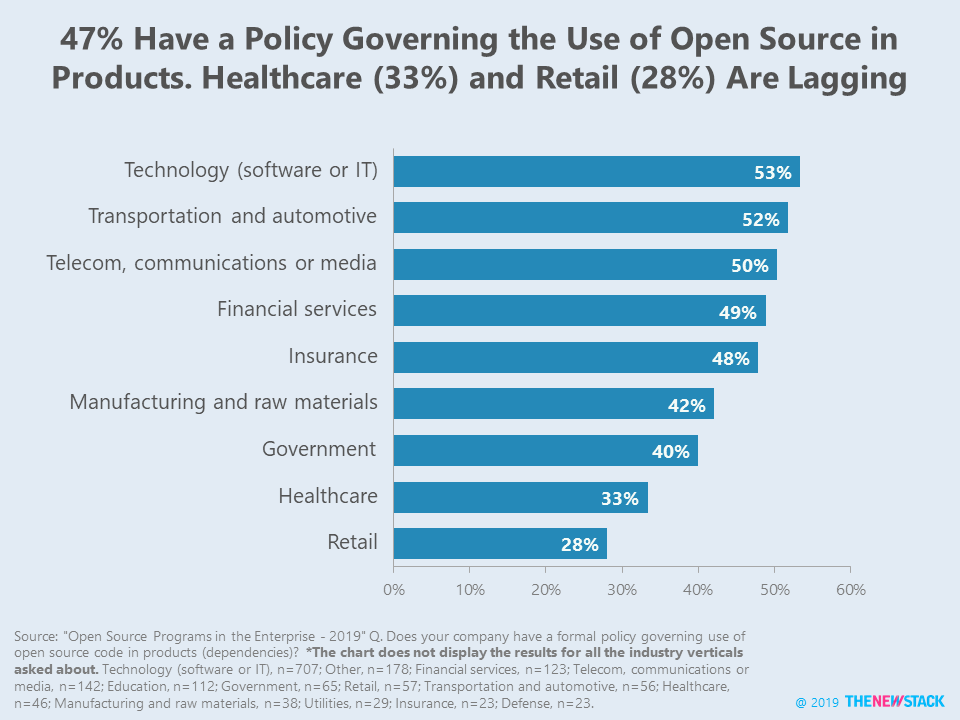 Generally speaking, companies that use open source code are also more likely to contribute to upstream projects. Software, IT, telecom and media companies lead in terms of both adoption and contribution to open source. Companies in these industries are also understandably more likely to have created an open program office or, at the very least, formal open source policies.

Traditionally, regulated industries have been slower to adopt open source technology due to legal and security concerns. For most industries, legal obstacles appear to have been at least partly overcome by improved awareness and acceptance of open source licensing and compliance. Yet, there are still outliers.

For example, 47% of respondents to an open source survey — conducted by The Linux Foundation’s TODO Group, VMware and The New Stack — already said their companies have a formal policy governing the use of open source code (dependencies) in commercial products. Yet, healthcare and retail firms are significantly less likely to be this far along. Additional details about industry vertical can be found our last article about the study. In addition, here are links to three previously published charts providing more industry perspective: 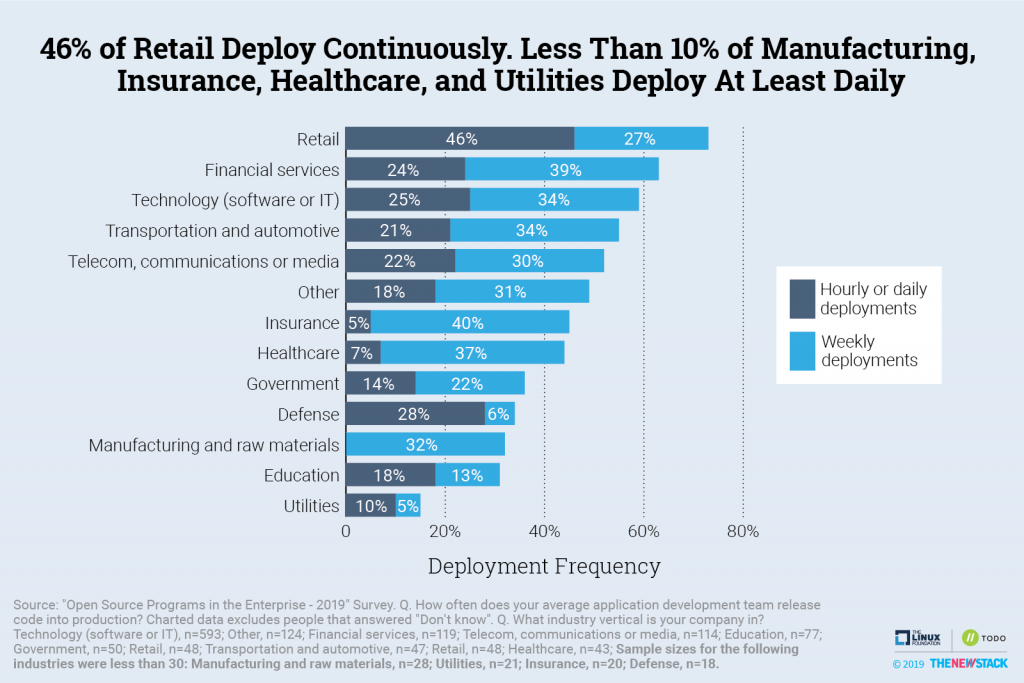 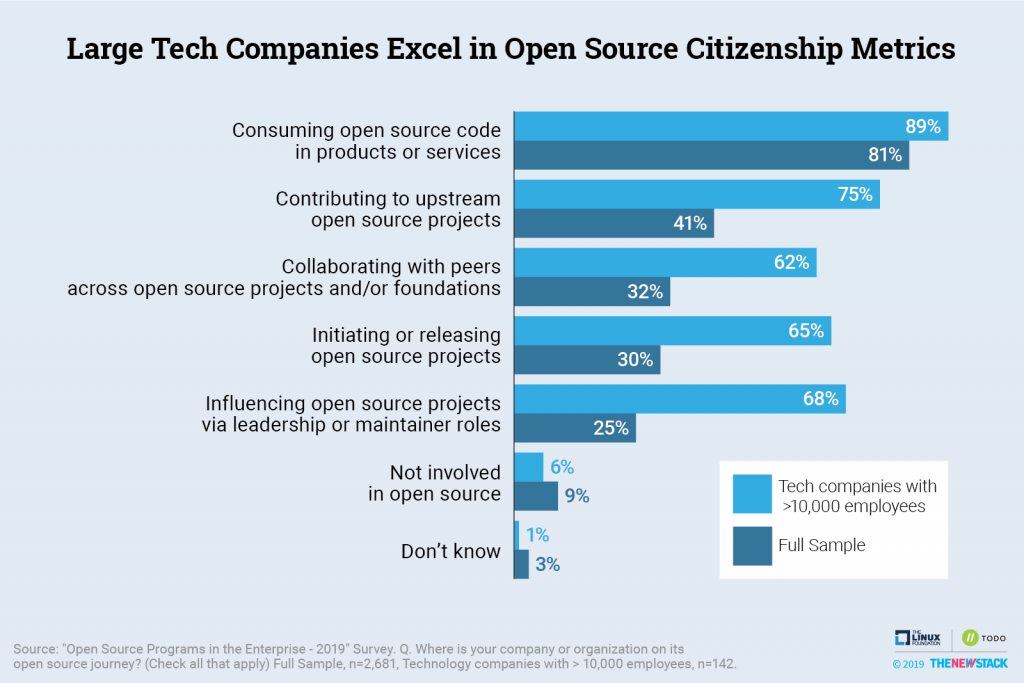 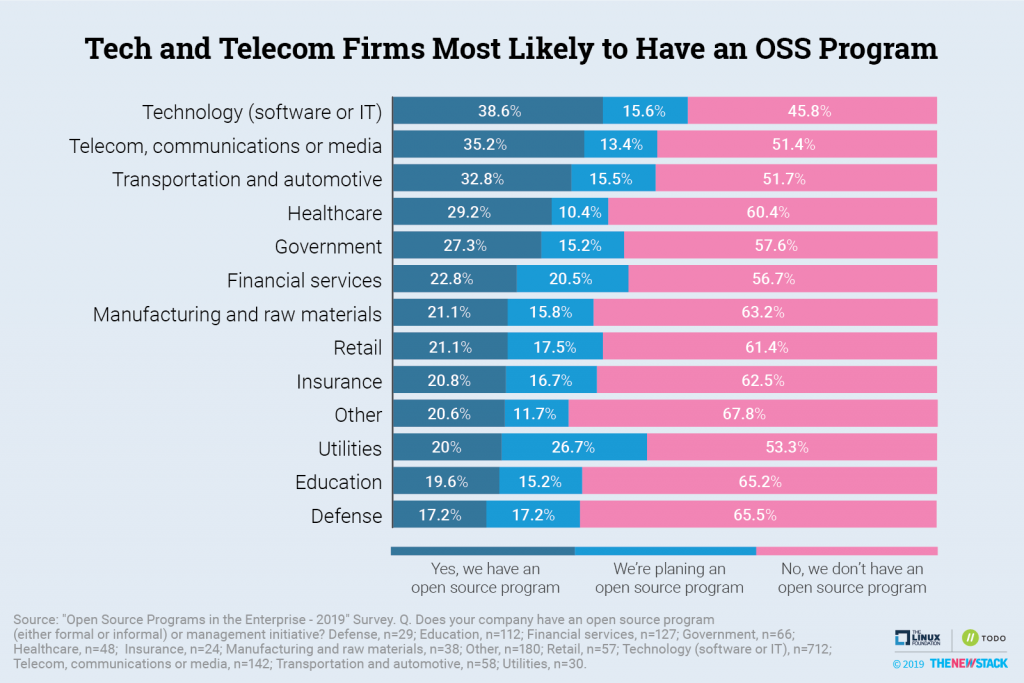 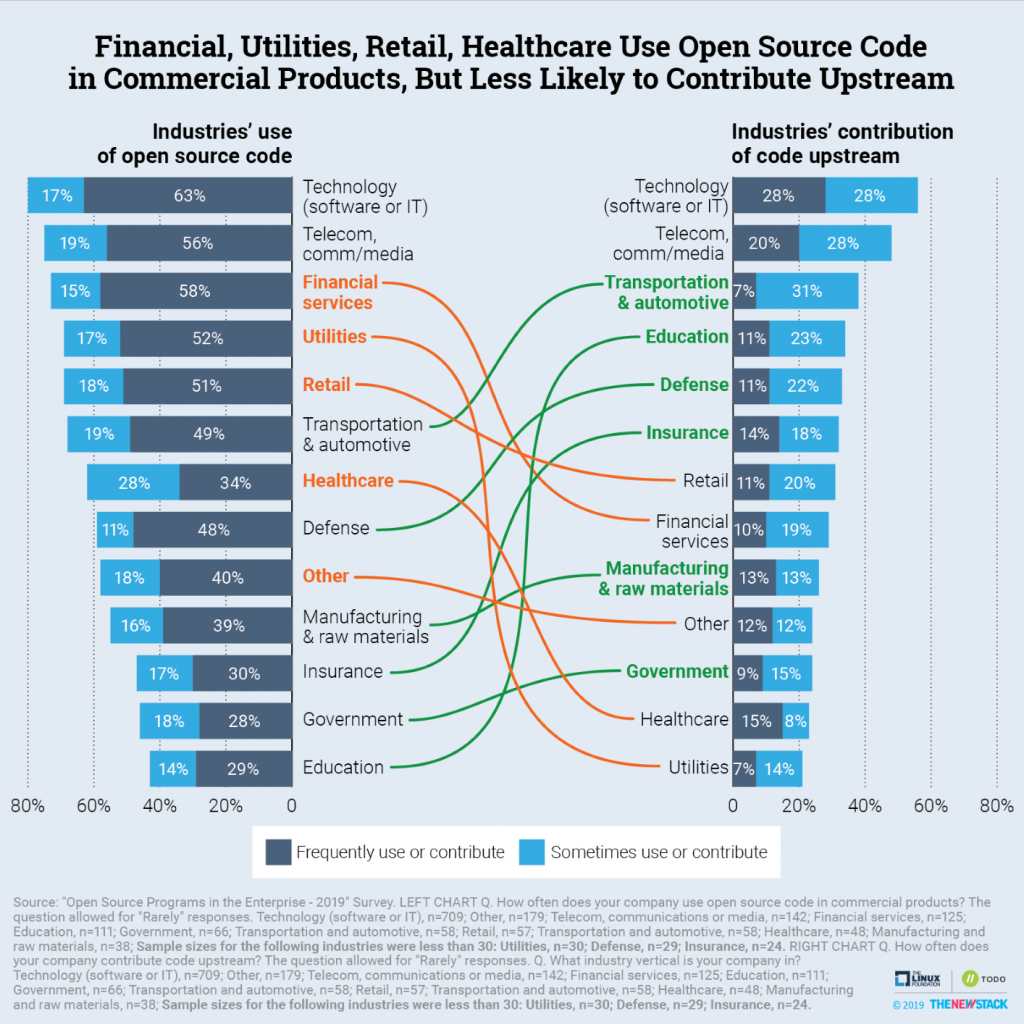 Some industries take more from open source than they make. For example, financial services ranks third out of 13 in terms of using open source in commercial products, but comes in eighth place in terms of upstream contributions. The disparity is even greater for utilities. On the flip side, industries like education were less likely to be using open source in commercial code at least partly because they are less likely to maintain a for-profit offering.

Lawrence has generated actionable insights and reports about enterprise IT B2B markets and technology policy issues for almost 25 years. He regularly works with clients to develop and analyze studies about open source ecosystems. In addition to his consulting work,...
Read more from Lawrence E Hecht
SHARE THIS STORY
RELATED STORIES
Why CIEM Plays a Key Role in Your Cloud Security Strategy What Is the Docker .env File and How Do You Use It? What TNS Readers Want in 2023: More DevOps, API Coverage 5 Best Practices for DevSecOps Teams to Ensure Compliance Swarm, a User-Friendly Alternative to Kubernetes
TNS owner Insight Partners is an investor in: The New Stack.
SHARE THIS STORY
RELATED STORIES
Kubernetes Needs to Take a Lesson from Portainer on Ease-of-Use The Top 4 Threats to Securing Your Cloud Infrastructure MicroK8s and Portainer Is The Easiest Way to Deploy an Application on Kubernetes Choosing the Right Container Native Storage for AWS Public Cloud What Trouble Awaits Cloud Native Security in 2023?
THE NEW STACK UPDATE A newsletter digest of the week’s most important stories & analyses.
The New stack does not sell your information or share it with unaffiliated third parties. By continuing, you agree to our Terms of Use and Privacy Policy.