How Pokemon Go Creator Builds on Kubernetes for Developers

In this latest episode of The New Stack Makers podcast, Ria Bhatia, senior product manager of Niantic, discusses why the Pokemon Go platform remains relevant today to developer customers and why Kubernetes will remain an integral part of the platform.
Nov 9th, 2021 11:40am by B. Cameron Gain 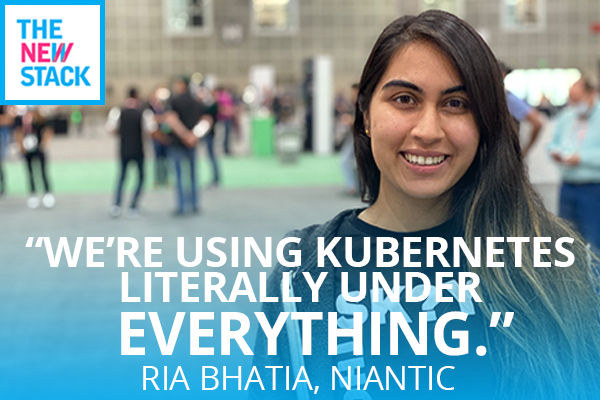 Kubernetes played a key role in maintaining Pokemon Go, Niantic’s wildly popular augmented-reality development. Kubernetes, and the efficiencies it offers DevOps teams, continue to play a role at Niantic, as the company builds on the game’s architecture to third-party developers.

In this latest episode of The New Stack Makers podcast, Ria Bhatia, senior product manager of Niantic, discusses why the Pokemon Go platform remains relevant and why Kubernetes will remain an integral part of the platform as the company hopes to bring in more “developer customers.”

How Pokemon Go Creator Builds on Kubernetes for Developers

Niantic’s mission is “to inspire people to go outside and explore the world together,” Bhatia explained. The first way the company does this is by publishing games, such as Pokemon Go. The company is also extending the platform for additional services such as augmented reality and geolocation services. The idea is to offer the services platform “to the world so they can build applications on top of us,” Bhatia said.

Today, every game customer has access to an individual cluster. “I think we’re going to keep that sense of isolation, for the infrastructure underneath,” Bhatia said.

Improving the developer experience remains a work in progress for Niantic. This involves, among other things, making it easier to publish games with the platform, which thus means making it easier for developers to create applications, Bhatia explained.

“We want to make sure that if you land on Niantic’s platform on day one, you’re able to prototype on your concept — and today, that’s not particularly true, Niantic is great, but it’s also really complicated,” said Bhatia.

The challenges Niantic faces today are around how to translate the stack and platform that was used to create the Pokemon Go game into something more accessible to third-party developer customers.

“We built a really hard tech stack — we actually split a lot of our components from Pokemon Go and created a platform out of it, which is awesome, because we love those core components. But we didn’t think about the usability or the reliability, so, that’s what’s next,” Bhatia said. “We’re building out our core platform teams, we’re building out our site reliability engineering and server engineering teams across our entire company, and we have machine learning (ML) engineering positions open.”