As we approach the 50th anniversary of NASA's historic Apollo 11 mission — and the day the three astronauts blasted off on July 16th — one web site has assembled an amazingly detailed recreation of their entire mission.
Jul 14th, 2019 6:00am by David Cassel 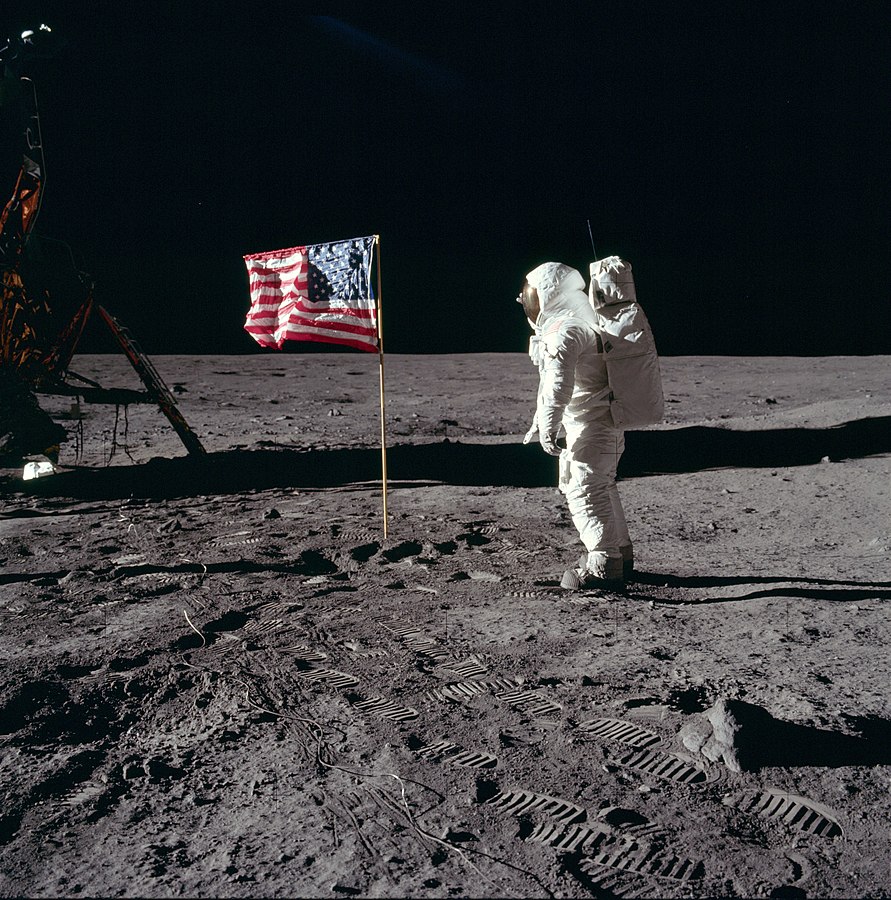 I remember July 20, 1969. My dad pointed to the sky, and said “There are men up there right now sleeping on the moon.”

As we approach the 50th anniversary of NASA’s historic Apollo 11 mission — and the day the three astronauts blasted off on July 16th — one website has assembled an amazingly detailed recreation of their entire mission. “If you’ve ever wished you could blast off in a rocket ship and walk on the moon with Neil Armstrong and Buzz Aldrin, an out-of-this-world website is making the dream come alive,” wrote the Houston Chronicle.

“Apollo 11 in Real-Time” promises every moment of the entire mission to the moon by pulling together and carefully synchronizing a vast treasure trove of authentic multimedia, including:

All the footage, plus the TV transmissions from space — and from the surface of the moon — “have been painstakingly placed to the very moments they were recorded during the mission, as has every photograph taken, and every word spoken,” the site explains. It all comes together in an immersive experience that’s been carefully synced up to “Ground Elapsed Time,” the official master clock of the entire mission. You can also switch from video footage to a “dashboard” view tracking distance from earth, velocity, and the specific day of their eight-day mission.

Announcements on the progress of the countdown are made by the Public Affairs Officer (PAO) Jack King, the “Voice of Apollo”, explained a blurb in the site’s commentary panel. But in addition, there’s audio from Mission Control — which also plays in real-time. The 50 channels of digitally restored Mission Control audio have been made publicly available here for the first time. They total over 11,000 hours in length. 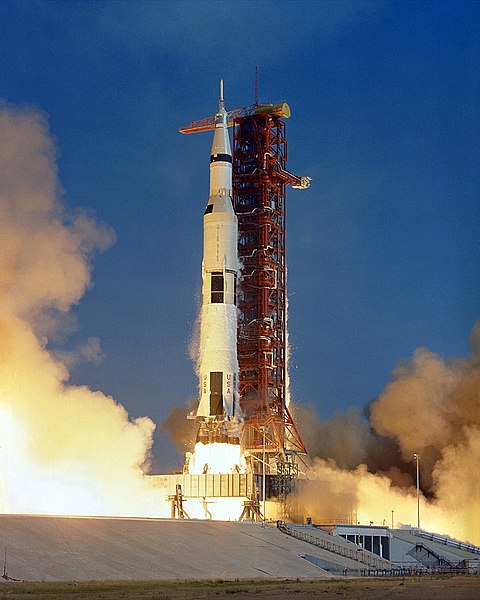 But who’s responsible for this labor of love?

In December an article in Vanity Fair acknowledged the community of “hard-core civilian space enthusiasts,” many of whom were involved in creating the site.

“Apollo 11 in Real-Time” credits six people, starting with Ben Feist for the concept, as well as things like research, mission data restoration, audio restoration, and programming. But he’s got his own story of a passion for science which turned into something much more. In December Vanity Fair identified him as “by profession… the head of technology at an ad agency in Toronto. But he spends the better part of his off-hours applying his formidable coding skills to the creation of such astonishing reconstitutions of space history as Apollo17.org,” another site that tracks NASA’s final manned moon mission from 1972, again in real-time.

On Reddit, Feist reveals that Apollo 17 site took three times as long to build as the (newer) Apollo 11 site — because “I didn’t know what I was really doing when I was working on 17.”

He promptly shared its code on GitHub — before working on extending that code to create the newer Apollo 11 site. But that Apollo 17 site had already given Feist some real credibility at NASA, according to his personal web site at BenFeist.com, when Dr. Noah Petro of Goddard Space Flight Center invited Feist down to give a talk for that Apollo 17’s 44th anniversary. “After so many years of working in isolation on what was ultimately a personal passion project, I was being given the opportunity to visit NASA and explain what I had done with the historical material and the unique use I had found for Lunar Reconnaissance Orbiter data… I drew upon my experience speaking to senior clients in the software development sector, and gave the presentation my all.”

It turns into an inspiring example of collaborations founded on a mutual love of space. Dr. Jacob Bleacher, a NASA volcanologist, asked whether Feist could also include the moment when samples were collected from the moon’s surface — a feature Feist added to the Apollo 17 site a few weeks later, and also included in the Apollo 11 site. It’s the “Astromaterial Samples” button towards the upper right.

Feist writes that it had all felt like a victory lap — a story to tell the grandkids — but then another meeting followed with NASA’s chief exploration scientist and a planetary geologist. They told him that NASA had been struggling with a long-time pain point: the proliferation of data from all of NASA’s cutting-edge sensors, and how to organize and visualize it. Feist had said he was glad that his idea might help them solve their problem, which drew a surprising reply from NASA’s chief exploration scientist.

In the end, they invited him to join a mission to one of New Mexico’s volcano fields — and to give another talk (along with the last surviving member of the Apollo 17 crew). He began another project for NASA’s Neutral Buoyancy Laboratory (the underwater pool where astronauts rehearse spacewalks).

And it all leads to a very happy ending:

Throughout this adventure, every time I met someone new or had a new conversation, I would try to find a way to add value — to help. Don’t ask for things; offer things. This stance culminated in a phone call from Noah and Jacob this past fall asking if I would be interested in working on NASA projects full-time. Jacob said, “Your name is on so many things for 2019 it would be easier if you just worked here.”Once I had regained my composure, I responded, “Yes.”

Inspiring talk by @BenFeist about how painstakingly cleaning & merging lunar mission data on his own time to build https://t.co/GWIv2k4TsB led him from marketing agencies to NASA. Blurrily pictured: rover tracks and bootprints photographed by @LRO_NASA. pic.twitter.com/DUnF4VDVV7

More Parts of the Picture

In a discussion on Hacker News, Feist revealed that his next “project” will visualize the Apollo 13 mission. But last month Feist was talking about man’s first walk on the moon, proudly telling the Houston Chronicle that the Apollo 11 site presents “the most complete presentation of the mission’s historical film footage ever assembled.” In a comment on Hacker News, he remained modest about its actual implementation, writing there was “No trendy JS frameworks. The UI was pretty much just whatever I could think of in terms of layout, then a friend of mine helped to design it up a bit so it didn’t look like a developer designed it.”

He later added that the remarkable site “is just a pile of JS and some JQuery. One thing of note is that there are no server-side services in this architecture. The browser does all of the work itself.” 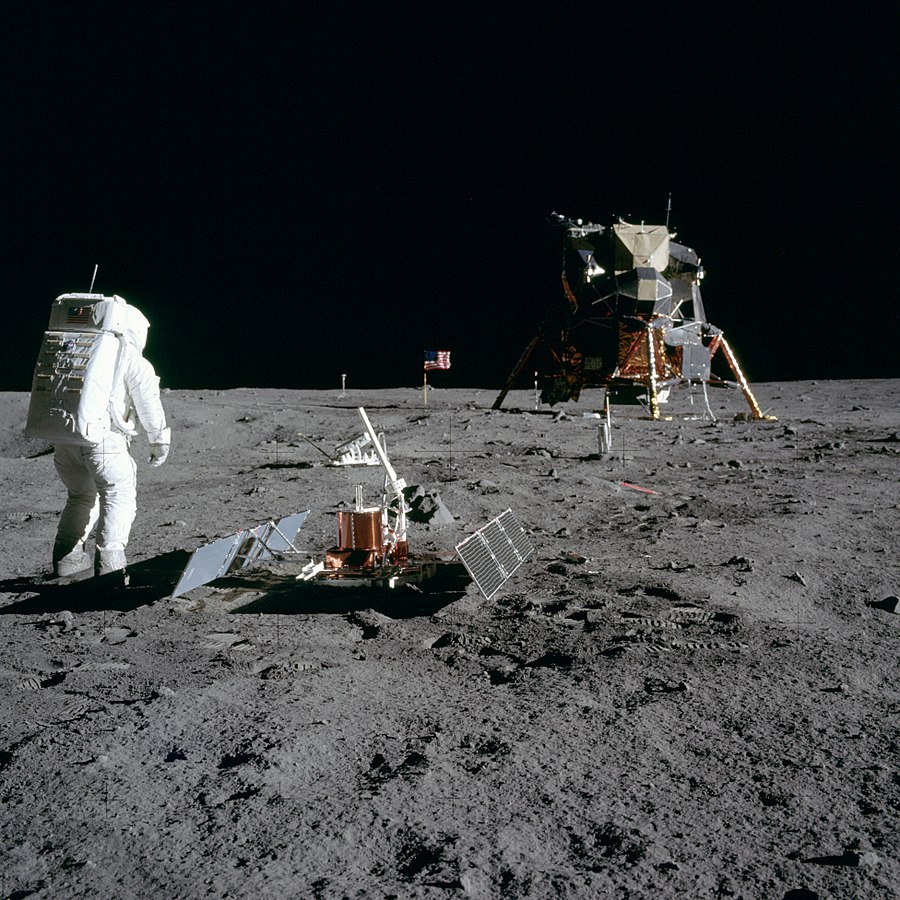 There are other bells and whistles, including a “Commentary” button, which flashes when its timestamp is reached, alerting viewers that there’s a new/refreshed text. And though Apollo 11 was an 8-day mission, there’s a “Mission Milestones” button that lets you navigate quickly to specific highlights (including “001:06:00 Armstrong offers Collins some gum.”) All the audio has been carefully curated — the left ear is space-to-ground transmissions, for example, while the “center” audio is reserved for onboard recordings. (And you can also play just the Mission Control audio, separately — accompanied by an ongoing diagram of who’s speaking.)

Michael Collins was the astronaut who piloted the control module while Aldrin and Armstrong spent their day on the moon. And now 50 years later, at the age of 88, Collins is enjoying the “Apollo 11 in Real-Time” site just like everyone else.

Brings back so many memories, don’t know which part to focus on.

There’s even a transcript — fully searchable — which led me to a moment where Mission Control was apparently having some fun. “You might be interested in knowing, since you are already on the way, that a Houston astrologer, Ruby Graham, says that all the signs are right for your trip to the moon,” they joke at one point. “She says that Neil is clever, Mike has good judgment, and Buzz can work out intricate problems…” 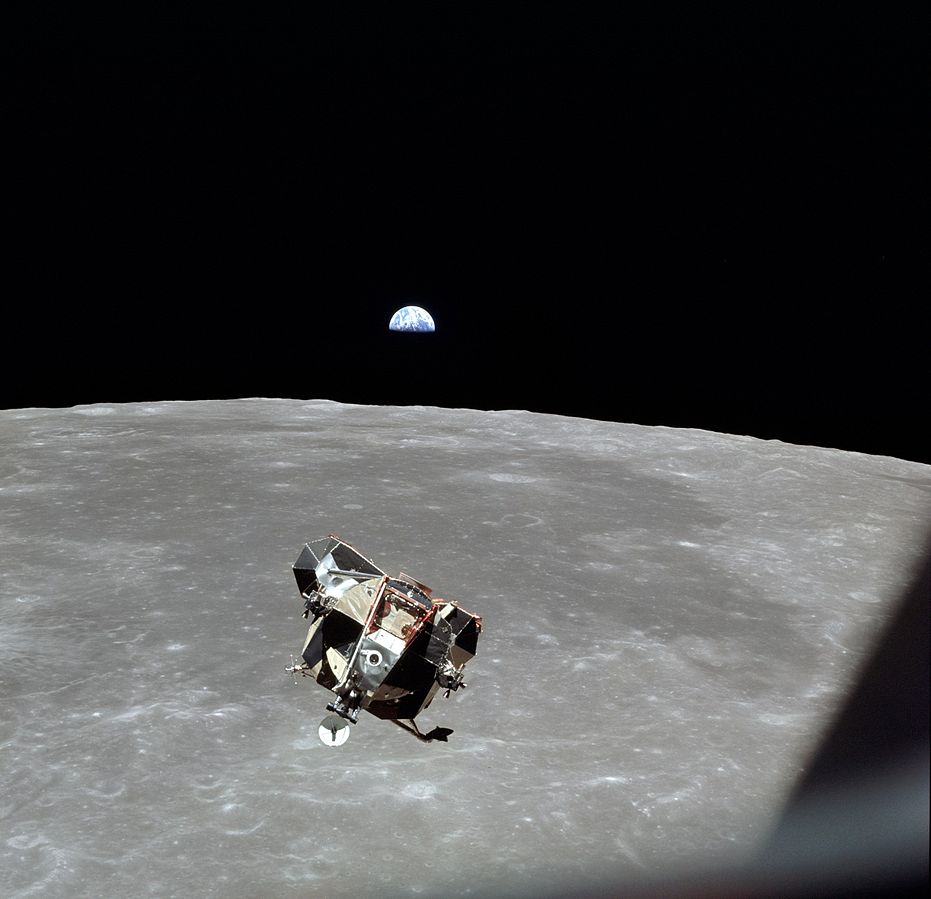 A “share” icon opens a pop-up window with a URL for your current moment in the launch — along with the corresponding text from its transcript. There’s also a “time navigator” along the top of the screen, with two additional bars below it for jumping to specific moments (indicated with photos or excerpts from transcripts). And there’s even an icon that let’s you sync the mission to the current time today.

But there’s yet another way to navigate, which may prove useful as the 50th-anniversary approaches. The interface also includes a “Now” button allowing you to drop into a moment exactly 50 years ago.

Some people are already talking about running through the entire eight-day mission.

. @BenFeist put together an amazing recreation of the Apollo 11 mission from start to end, and I'm going to (attempt to) stream it start to end in "real-time", on a 50 year delay, of course. Prelaunch sequence begins at https://t.co/ydI6jNX4hI in five days!#MotherShipPoker https://t.co/WBV7HM2R5E

“Running through the entire mission is very rewarding,” Feist told the Houston Chronicle. “You really get to know the personalities of the crew and controllers. It feels very current, as though it’s happening right now…

“If I had my way, all of humanity would take a moment out of their busy lives, tune in and marvel at the scale of what humanity can achieve when we all work together.”

SHARE THIS STORY
RELATED STORIES
How Will Working in Tech Change in 2023? Why Your Code Sucks: Common Excuses for Bad Programming 2022 in Review: AI, IT Armies, and Poems about Food How to Get Started Filling 3.4 Million Cybersecurity Jobs A Brief DevOps History: The Road to CI/CD
TNS owner Insight Partners is an investor in: Real.
SHARE THIS STORY
RELATED STORIES
Platform Engineering Won’t Kill the DevOps Star How Will Working in Tech Change in 2023? How We Manage Incident Response at Honeycomb How Jit Builds a Platform Engineering Mindset in the Cloud 2023 Will Be the Year FinOps Shifts Left Toward Engineering
THE NEW STACK UPDATE A newsletter digest of the week’s most important stories & analyses.
The New stack does not sell your information or share it with unaffiliated third parties. By continuing, you agree to our Terms of Use and Privacy Policy.