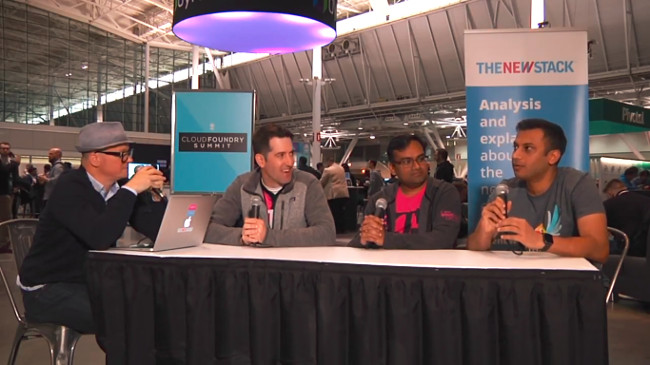 On today’s episode of The New Stack Makers podcast, TNS founder Alex Williams was joined by Rahul Kamdar, TIBCO director of product management and strategy; Kristopher Wilson, T-Mobile director of IT development; and Chandra Sriramoju, T-Mobile principle site reliability engineer. They discussed the ways in which integration software provider TIBCO and T-Mobile are joining forces to utilize CI/CD practices to build out a software architecture capable of handling 5G network speeds, which T-Mobile is launching later this year.

Wilson noted that T-Mobile has gone from 15 million subscribers to 73 million subscribers today, with its middleware application integration stack managed by Sriramoju. Diving into the discussion, Wilson went on to note that when he joined the company nine years previously, T-Mobile had centered much of its infrastructure around its billing system, which later was broken down and transformed over a number of years to better serve its customer base.

“The first thing is we were a big legacy system, a very rigid system. We didn’t have the scalability features, circuit breakers, all these digital terms that came with TIBCO and Cloud Foundry. It was a big mental shift for the team members too. Right now we are doing CI/CD, automated testing, A/B testing, circuit breakers, and now we are doing some amazing stuff. We used to worry about capacity, and now we don’t worry about those things,” said Sriramoju.

Wilson added that T-Mobile used to plan six months in advance for the launch of popular new devices. With the elasticity of Cloud Foundry, they no longer have to re-rack and scale their stack, and this timeline has now been cut down to four weeks.

For its part, TIBCO started working with Cloud Foundry about four years ago, beginning with making some of its core product stack native to the environment inside Cloud Foundry. Sriramoju explained that they have been lucky to work with customers that embrace technological shift within their company culture. Both companies now contribute to open source, with T-Mobile having its own open source office and open source software project database.

“The journey we embarked on a year ago, we started with one call in a different app in our retail service platform, and we saw we could prove it out there. Then we started on the TIBCO side, it’s 150 million transactions a day, so we started migrating it one by one, looking at the different operations we have and getting those out of the way first, migrating legacy code, getting it prepped, getting it tested, integrating it with CI/CD, and all of it was brand new at the time,” said Wilson.

Thinking ahead, Wilson highlighted that 5G content and services will put a lot of demand on its infrastructure reliably. From an operations perspective, Sriramoju explained that TIBCO is focusing on telemetry and self-healing containers, with TIBCO also focusing on applying machine learning to IoT from a high-level perspective, making it portable, and being able to apply it to a new class of use cases where there is less manual intervention.

Open How Tibco and T Mobile are Ushering in 5G with CI/CD and Cloud Foundry on YouTube.

4:06: The transformation of TIBCO’s middleware and how it has had to adapt to the new Cloud Foundry architectures and modern development?
9:50: Exploring T-Mobile’s journey with TIBCO
11:37: How TIBCO is transforming its DevOps operations and its impact on their CI/CD learning.
18:56: Discussing the technology infrastructure TIBCO is developing
21:00: What are some of the parameters for your thinking going forward as you start to think about continuous delivery?
22:55: What architecture decisions TIBCO is making to continue to be a value to customers.