How the Linux Foundation’s EVE Can Replace Windows, Linux for Edge Computing 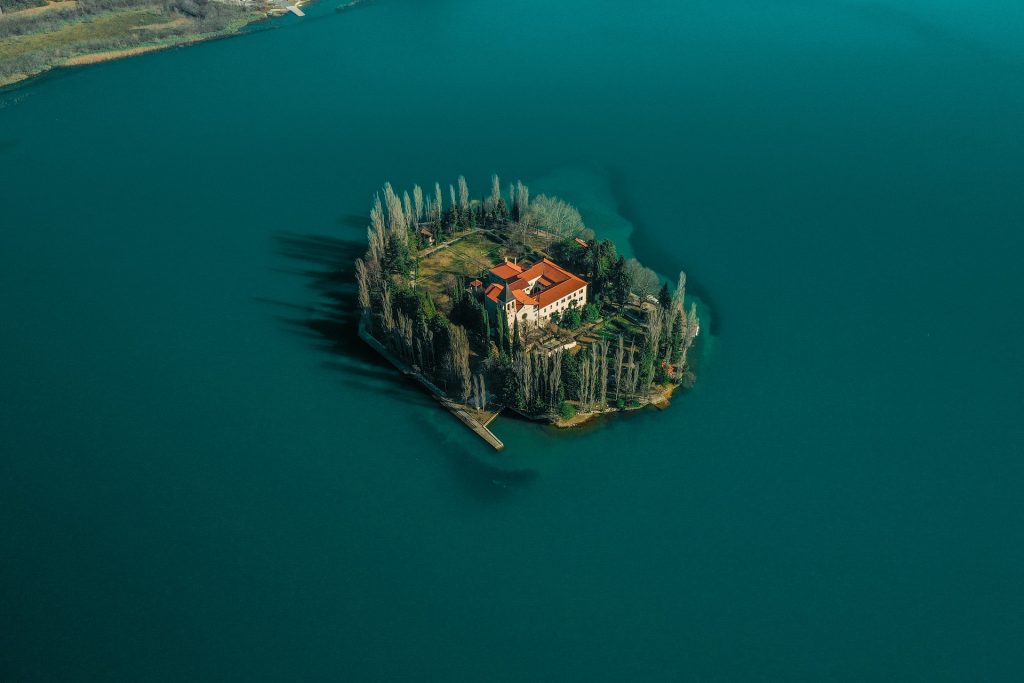 Roman Shaposhnik
Roman is an open source software expert, currently serving on the board of directors for both The Apache Software Foundation and LF Edge. He is a co-founder and the vice president of product and strategy for Zededa, an edge virtualization startup. Throughout his career, Roman has held technical leadership roles at several well-known companies, including Sun Microsystems, Yahoo!, Cloudera and Pivotal Software. He holds a master's degree in mathematics and computer science from St. Petersburg State University.

Whether or not Edge computing serves as the backbone of mission-critical business worldwide depends on the success of the underlying network.

Recognizing the Edge’s potential and urgency to support Edge network, The Linux Foundation earlier this year created LF Edge, an umbrella organization dedicated to creating an open, agnostic and interoperable framework for edge computing. Similar to what the Cloud Native Computing Foundation (CNCF) has done for cloud development, LF Edge aims to enhance cooperation among key players so that the industry as a whole can advance more quickly.

By 2021, Gartner forecasts that there will be approximately 25 billion IoT devices in use around the world. Each of those devices, in turn, has the capacity to produce immense volumes of valuable data. Much of this data could be used to improve business-critical operations — but only if we’re able to analyze it in a timely and efficient manner. As mentioned above, it’s this combination of factors that has led to the rise of edge computing as one of the most rapidly -developing technology spaces today.

This idea of interoperability at the edge is particularly important because the hardware that makes up edge devices is so diverse — much more so than servers in a data center. Yet for edge computing to succeed, we need to be able to run applications right on local gateway devices to analyze and respond to IoT and Industry 4.0 data in near-real time. How do you design applications that are compatible with a huge variety of hardware and capable of running without a reliable cloud connection? This is the challenge that LF Edge is helping to solve.

Part of the solution is Project EVE, an Edge Virtualization Engine donated to LF Edge by ZEDEDA last month. I think of EVE as doing for the edge what Android did for mobile phones and what VMware did for data centers: decoupling software from hardware to make application development and deployment easier.

This curious (and somewhat unexpected) interplay between mobile and server computing requirements is exactly what makes edge so exciting. As an open source project, EVE now has a unique opportunity to blend the best parts of building blocks from projects as diverse as Android, ChromeOS, CoreOS, Qubes OS, Xen, Linuxkit, Linuxboot, Docker, Kubernetes and unikernels (AKA library operating systems — out of which AtmanOS is our favorite). And if you are still not convinced that all of these projects have much in common, simply consider this:

There’s no denying that EVE stands on the shoulders of all these open source giants that came before it and yet it has plenty of its own open source development to be done. In the remainder of this article, I’ll cover some of the technical details of Project EVE.

Fundamentally, EVE is a replacement for traditional (or even some of the real-time) operating systems (Linux, Windows, VxWorks, etc.) that are commonplace today in IoT and edge deployments. EVE takes control right after UEFI/BIOS and we have future plans around Linuxboot to have EVE actually replace your UEFI/BIOS altogether.

There are three key components of EVE: a type-1 hypervisor, running directly on bare metal; an Edge Container runtime that allows you to run applications in either a virtual machine or container; and a hardened root-of-trust implementation for security. A full list of hardware that EVE was tested on is available on the project’s Wiki page, but we expect EVE to run on most modern edge computing hardware (including products from major companies like Advantech and Supermicro, as well as architectures from ARM and Intel).

Once the EVE instance is up and running, the first thing it does is contact a pre-defined controller and receive instructions from the controller on how to configure itself and what workloads to start executing. The controller builds these instruction manifests for every EVE-enabled device that it knows about, based on the overall orchestration requests it receives from the DevOps rolling out a given deployment.

The API that EVE uses to talk to the controller is part of the LF Edge standardization efforts and we fully expect that it can evolve into the industry de-facto standard for how edge virtualization infrastructure is being controlled and monitored. You can see the current version of the API and documentation in EVE’s GitHub repository.

The kinds of workloads that a DevOps will be deploying to all EVE-enabled devices are packaged as Edge Containers. Edge Containers are meant to be an extension of traditional OCI Containers and the effort around their standardization will be ongoing in LF Edge in the coming months. The idea behind Edge Container extensions is to allow for seamless integration between virtual machine, unikernel and container workloads through a single packaging and distribution format.

Continuing with our Android analogy, one may say that while EVE is trying to do for the edge what Android has done for mobile, Edge Containers are meant to be the APKs of the edge.

All of EVE’s functionality is provided by a series of individual Go microservices that are running in full isolation from each other, similar to the pioneering ideas of radical isolation introduced by Qubes OS. Our ultimate goal is to make each one of those microservices be a standalone unikernel running directly on top of a type-1 hypervisor without requiring any operating system at all. We are planning to leverage excellent work done by the AtmanOS community in order to achieve that.

All of EVE’s microservices and infrastructure elements (think boot loader, Linux kernel, etc.) are tied together into a Linuxkit-like distribution that allows us to provide bootable EVE images ready to be deployed on Intel– and ARM-based edge hardware.

Our root-of-trust architecture leverages TPM and TEE hardware elements and provides a solid foundation for implementing flexible secret management, data encryption and measured boot capabilities without burdening application developers with any of that complexity.

Finally, on the connectivity side, EVE offers flexible networking capabilities to its Edge Containers through transparent integration of LISP protocol and crypto-routing. That way, EVE can provide SD-WAN and mesh networking functionality right out of the box, without requiring additional integration efforts.

Putting it all together, the internals of EVE’s architecture look something like this: 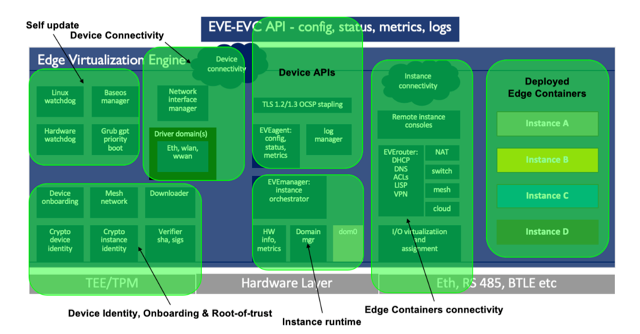 While this architecture may seem complex and daunting at times, we’re rapidly investing in documenting it and making it more flexible to work with. The EVE community shares the spirit of the Apache Way and believes in “Community over Code.” We welcome any and all types of contributions that benefit the community at large, not just code contributions:

The most important part of Project EVE is that it’s an open standard for the community, designed to make it easier for others to create and deploy applications for the edge. Now that the code is officially open sourced through LF Edge, it’s also available for anyone to contribute to and explore.