This year brought a new version of the iconic video game The Oregon Trail by the maker Gameloft; it now also includes the perspective of Native Americans living in what pioneers saw as an unexplored frontier.
Jun 6th, 2021 6:00am by David Cassel 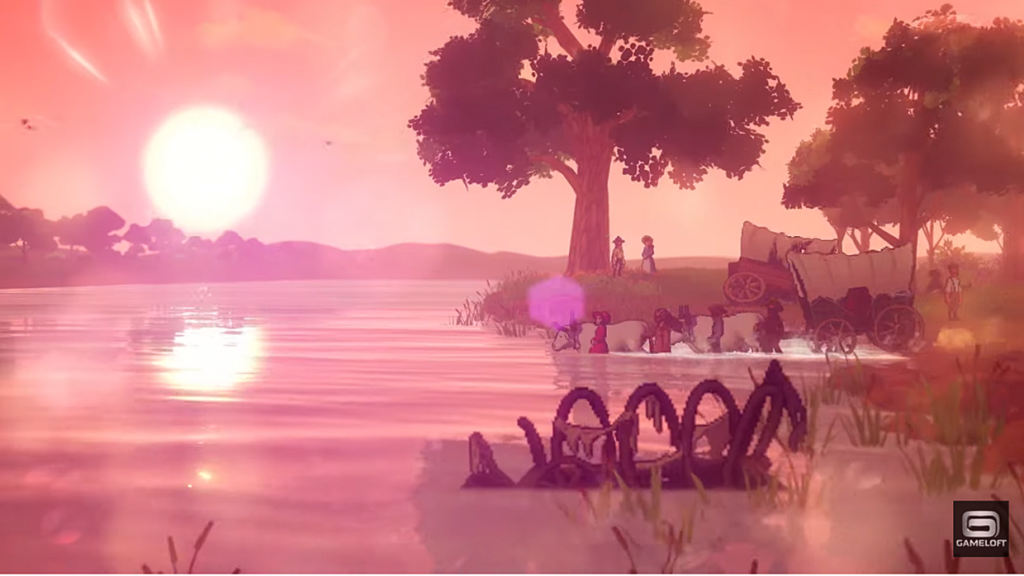 It’s a video game that was first played nearly 50 years ago. But as our world changes, and the way that we view our history, the game has evolved too. This year brought a significant re-imagining of the iconic video game The Oregon Trail; it now also includes the perspective of Native Americans living in what pioneers saw as an unexplored frontier.

In its own way, this widely loved video game may be attempting to make some history of its own.

The Oregon Trail was one of the first video games inducted into the World Video Game Hall of Fame when the museum opened in 2015 in Rochester, N.Y. The museum’s website hails the game as “the longest-published, most successful educational game of all time,” with more than 65 million copies sold, and possibly even “the oldest continuously available video game ever made.” The page dedicated to The Oregon Trail also acknowledges that the game “blazed a path for the use of video games in learning,” introducing children to computers and history at the same time.

But for some players, that experience was jarring. In a news report, Portland station KGW spoke to 38-year-old Jazz Halfmoon, a member of the Confederated Tribes of the Umatilla Indian Reservation, in northeast Oregon. She remembered playing the game as a schoolchild on “the really big, boxy monitor and the clunky keyboard.” But as she described the experience to NW News Network, “I remember being like, ‘Oh, like the Indians killed off somebody in your wagon train… and then being like, ‘Oh, we’re Indians, you know.’ ”

This year, a more sensitive version of the game turned up on the Apple Arcade video game subscription service (available through a tab on Apple’s App Store). This version of The Oregon Trail now opens with an acknowledgment that, “For Indigenous Peoples, westward expansion was not an adventure but an invasion.” And then it tries to include their perspective in the story. Speaking to KGW, Gameloft Brisbane’s creative director, Jarrad Trudgen, said that “more respectful representation was really what we were going for.” 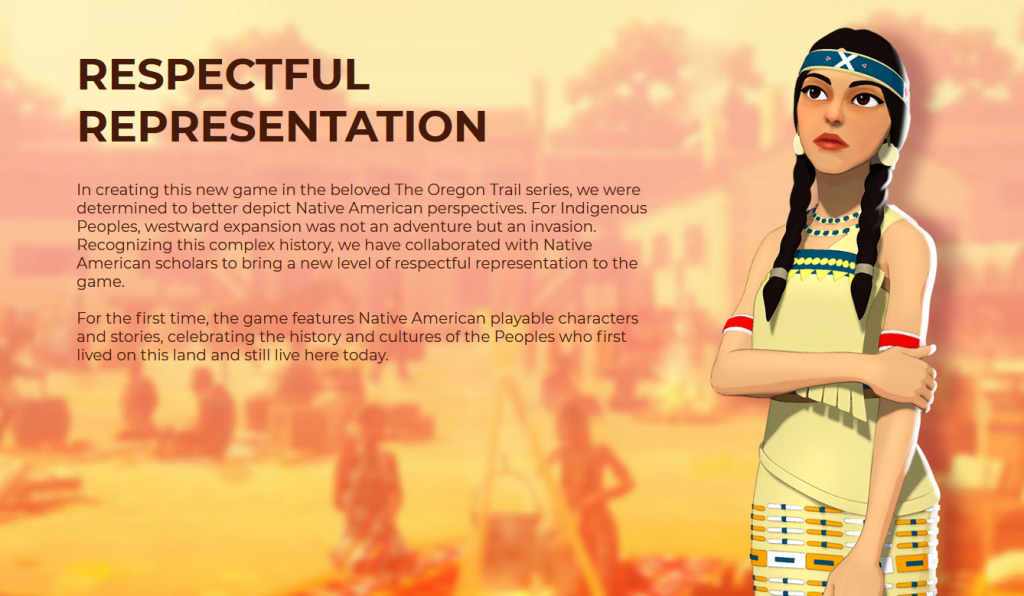 The game team brought in three different historians who are themselves Native Americans, Trudgen said; the experts offered feedback on the game’s reboot.

A couple Native kids who grew up playing Oregon Trail in the 90s were among those who got to help update the game. This was an incredible experience, and I’m so glad I got to do it alongside @historianhuettl and Willy Bauer!https://t.co/sxFhFOJ02H

One thing the historians had pointed out: many Native Americans were quite fluent in English — even while many representations have them speaking clipped, broken-English sentences. “It’s like a trope to make Native American people seem primitive, when actually there were a lot of bilingual or polylingual Native Americans at that time,” Trudgen told NW News Network.

Even bows and arrows are considered a stereotype, since by the mid-19th century Indian trappers would almost certainly have acquired rifles, according to Margaret Huettl, a University of Nebraska historian who also helped advise the team. Maintaining a stereotype “wasn’t our intention at all, obviously,” Trudgen told NW News Network. “We were just coming to it sort of as a naive ‘bow and arrows are cool’ angle.”

Trudgen added that “I’m a white, Australian you know? I’m not an expert in this area. So it was important — it just was the right thing to do.” 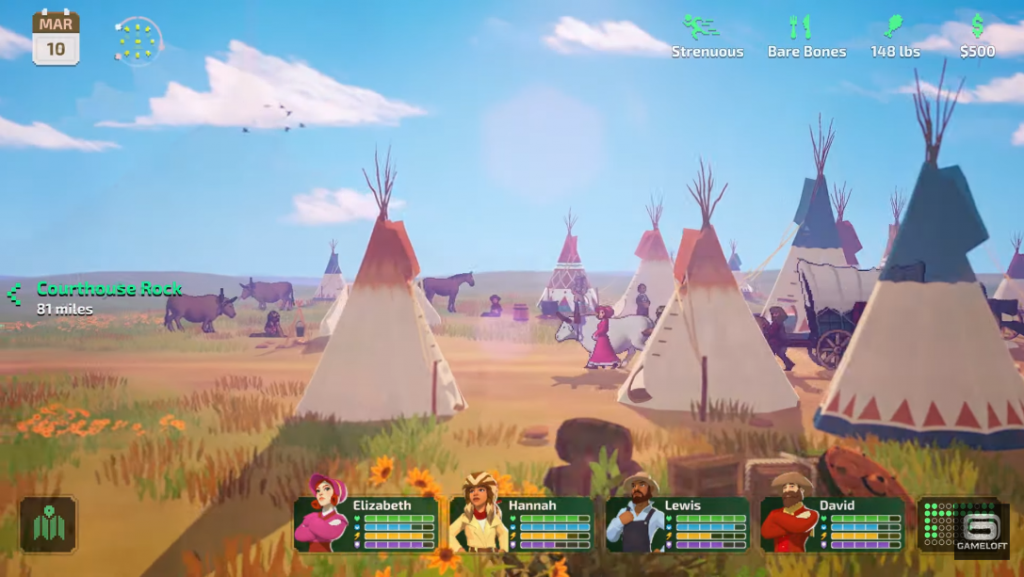 Speaking to NW News Network, Huettl described some of the other changes she and the other historians  recommended. Even in the newer version of the game, “Initially, all of the Native people had braids.” But Huettl, who had researched old photos and drawings to ensure accuracy, says “I think we suggested, maybe they don’t all have to have braids.”

Trudgen tells KGW that ultimately they’d wanted to depict Native Americans “as human beings — fleshed-out characters that you could have relationships with and have empathy with.”

The game also includes actual Native Americans from the past, including Biawacheeitchish (“Woman Chief”) from the Crow tribe, and Moses Harris, a historical figure who Gameloft describes as a well-known and respected Black American mountaineer, fur trapper, and wagon leader.

Smithsonian magazine called Gameloft’s new version of The Oregon Trail “a more nuanced approach to the story of white settlers traveling across the American West in 1848.” 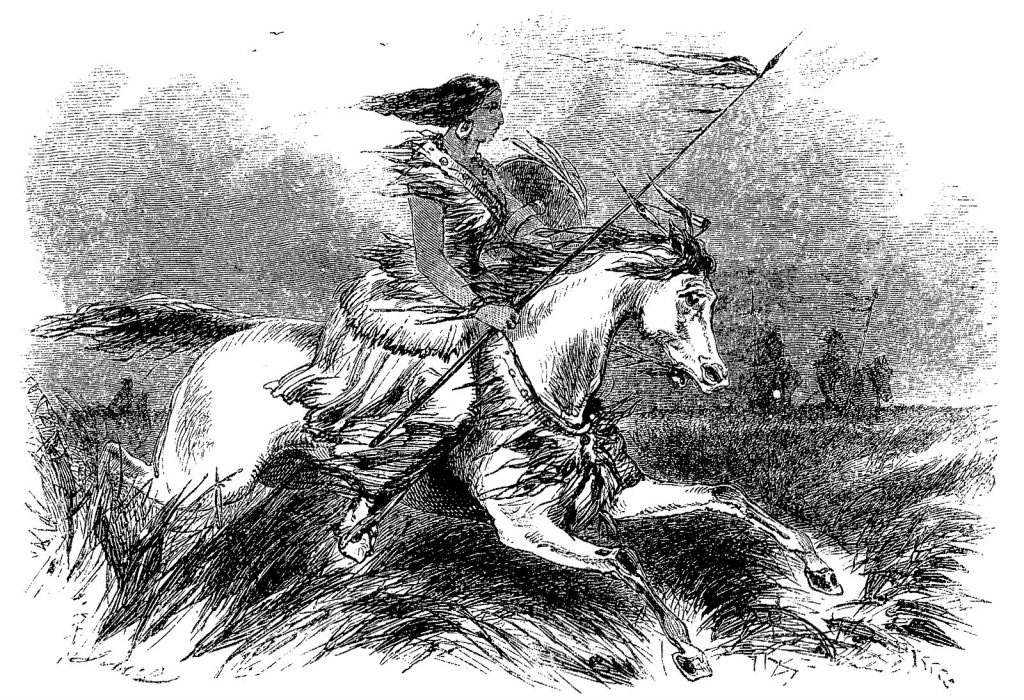 The new version preserves much of the game’s simple mechanics — but with stunning new backgrounds and graphics.

A 2011 article in City Pages remembers how the game started in 1971 with three roommates — all student teachers finishing their degrees at nearby Carleton College. Even back then, some teachers complained the game was politically insensitive to use the term “Indians,” but co-creator Don Rawitsch later brought the game to his new position with the Minnesota Education Computing Consortium (MECC), a publicly funded entity, formed in 1973, that provided computer services to the state.

Other than Rawitsch’s salary at MECC, none of the game’s three original creators shared in the game’s financial success, though they did get to enjoy their own moments in the history of educational software. In 1978, MECC awarded a statewide contract for 500 microcomputers to a group City Pages describes as “two no-names in their twenties — Steve Jobs and Steve Wozniak.” This ultimately led to significant early success for both Apple and the Oregon Trail game.

Since the software for its computers was distributed on floppy disks, MECC soon began selling floppy disks with its software collection (including The Oregon Trail) to out-of-state schools, eventually offering licensing deals that had soon attracted a third of all the school districts in America (as well as schools in 16 foreign countries).

Over the next 20 years, the game went through many more upgrades and iterations. In a 2017 essay on Medium, R. Philip Bouchard remembered working as the lead designer and team leader on the most widely remembered 1985 Apple II version. Bouchard recalled that he’d tried to add a missing element into the game: humanity.

“The 1971 design omitted the concept of people, and therefore you travel the entire 2000-mile route without ever meeting or interacting with another person,” he wrote. So, besides adding now-cherished features like hunting games, river crossings, and real-world geographical names, Bouchard also added personalization with user-entered names for the player and their family members.

And importantly, people were added into the game’s graphics — although ultimately their ambitious visions were curtailed by space constraints. Bouchard wrote, “My single biggest regret regarding The Oregon Trail is that I had to abandon most of my ideas for complex, nuanced interactions with Native Americans…

“However, a few of the simpler ideas did make it into the finished product. For example, you are much more likely to have a successful crossing of the Snake River if you hire a local Indian to guide you — which was also the case on the real Oregon Trail.”

So what’s the verdict on the 2021 version of the game? The culture website Hyperallergic published a reaction from T.J. Tallie, an assistant professor of African history at the University of San Diego who specializes in comparative settler-colonial, Indigenous, and imperial history. He recognized the significance of the game maker’s challenge, arguing that the original video game “fundamentally shaped how multiple generations first viewed not only Indigenous peoples, but the actions of settlement in the United States. It absolutely erases the violence that structured nearly every aspect of the Oregon Trail itself and the occupation of lands in the Pacific Northwest by settlers…

“[A]s children we were somewhat unwittingly invited into the gamification of colonialism… these games were also cosplaying conquest, rendering irreparable destruction as a pleasing form of play.”

So after playing the 2021 version of the game, Tallie found a marked and unmistakable improvement. “Indigenous North Americans are no longer background characters in what was, upon reflection, a wildly solipsistic game. In historically accurate clothing, fully playable and realized Indigenous characters respond to settlers as equals, have full dialogue, and even their own gameplay scenarios.”