How the World Celebrated ‘Pi Day’ 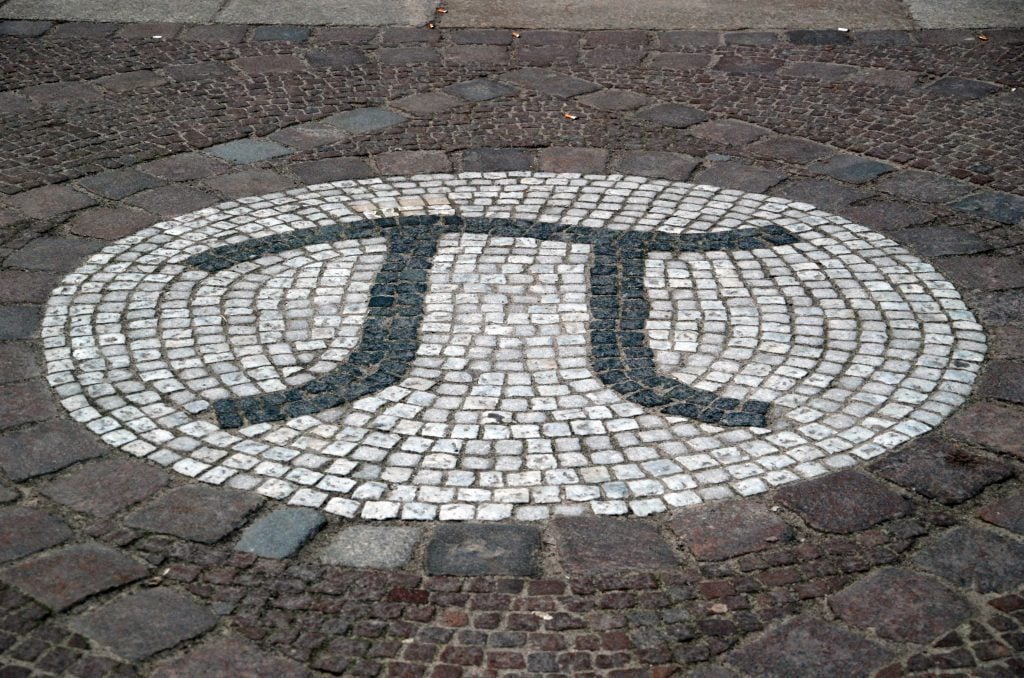 For more than 30 years, the fourteenth day of March — 3/14 — has been celebrated as “Pi Day,” a kind of Geek Pride day that gets honored in endlessly creative ways. It’s a way of reminding the world about the number — and all the geeks who care about it — in countless home-grown ceremonies, each one offering their own special shout-out to math, science, and the imaginary number pi.

Throughout the day, a team at Georgia Tech left peach pies around the campus, then posted pictures of their location on the school’s Twitter feed.

Come and get it! pic.twitter.com/owlpZO22wc

Meanwhile, Massachusetts Institute of Technology’s biology department held “a pie-eating get-together” — at exactly 3:14. The official “MITbloggers” YouTube channel released a remarkable annual Pi Day video. It teases viewers with a recipe which involves 37 feet of aluminum (not to mention welding gear), plus 60 pounds of butter, 628 pounds of peaches — and eventually, 400 pounds of charcoal under a six-and-a-quarter foot pie tin.

The end of the video acknowledges that MIT is continuing its tradition of informing high school seniors of their acceptance to MIT on Pi Day — with a couple of pie-related puns.

“Doughn’t you want your decisions?” it asks viewers, adding “We know you knead them” — and pointing them to the appropriate URL.

The biggest news of the day was a new world record for the most digits of pi ever calculated — specifically, 31,415,926,535,897 digits, by Google Cloud developer advocate Emma Haruka Iwao. She points out that this is the first time a record-setting calculation has been done on the cloud — representing its own giant leap for mankind, according to a conversation we had this week. 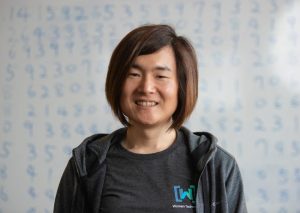 TNS: We were trying to do some math on that. If you’ve got 31 trillion digits, and you can store 4.7 gigabytes on a DVD, it would still take over 300 DVDs to store them all.

EHI: I think that sounds about right.

TNS: But I’m guessing no one is going to say, “Can you give me all of these pi digits, not on the cloud, but on DVDs!”

EHI: Before the cloud, what people used to do is they actually shipped hard drives. Instead of DVDs or Blu-Rays, they asked to put the digits in hard drives, and physically mailed those.

EHI: Several terabytes. But they would still need several disks to contain all of the digits!

After her achievement, a Google employee whose title is “creative engineer,” asked a thought-provoking question: What if to celebrate, we generated 31.4 trillion pieces of art? Google’s developer advocates had already created a “Pi API” in 2017, and they’ve now hooked it up to Emma Haruka Iwao’s 31.4 trillion digits. Written in Go, and deployed on a Kubernetes Engine cluster, the API can provide trillions of unique patterns.

So Mathias Paumgarten wrote code which, given a starting point from anywhere among 31.4 trillion digits, grabs several thousand of the next digits to create “seemingly random” numbers which are then transformed into artsy geometric shapes. “We have 31.4 trillion digits to celebrate!” explains its official web page (where you can generate your own just by entering an appropriate number). 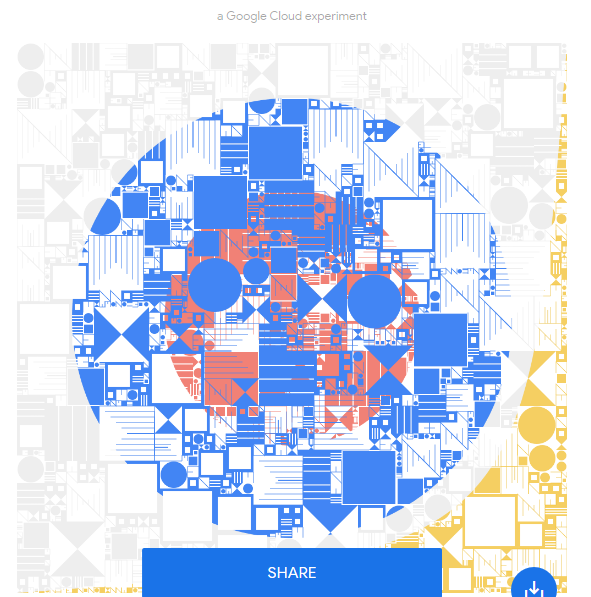 The Pi API page — conveniently located at pi.delivery — also includes a fascinating way to listen to the number, with each digit mapped to a note on a piano keyboard.

And they’re not the only ones trying to find new ways to experiment with pi.

Happy #piday! This image is a visualization of the first 1,000 digits of Pi, shown as links between adjacent digits. For each pair of digits, the curves in the circle's center connect a pair of segments associated with the digits. https://t.co/pdpKM0Yp4K 🎨: Martin Krzywinski pic.twitter.com/w4p917MFHd

Electronic music composer Canton Becker created an algorithm that converts the first 1 billion digits of pi into snippets of electronic music, creating a song that lasts 114 years. Lots of other public figures tried to keep up with all the geekery, acknowledging the arrival of the special day on social media.

If Professor Ludwig Von Drake's calculations are correct (and they usually are), today is #PiDay! pic.twitter.com/KfLp87OMBY

The official Twitter feed for Lego paid its respects. Newscaster Dan Rather shared some thoughtful remarks. And even Smokey Bear weighed in. Google Trends celebrated the occasion with data, sharing an infographic listing the most uniquely searched-for pie in each of America’s 50 states. (The most searched-for pie in California: Mud pie.)

Happy 3.14 Day! Let us know which pi(e) you love most #PiDay pic.twitter.com/U1pVZz9EVR

But Pi Day also offers an irresistible opportunity to get young students excited about math and science, and was celebrated at countless schools. Some students even tried to see how many digits of pi they could memorize!

The teachers got some star-powered support when the education office of NASA’s Jet Propulsion Lab released its sixth annual NASA Pi Day Challenge,” promising “planetary puzzlers that show students how pi is used at the agency… real-world problems faced by NASA scientists and engineers.” (There’s a dust storm on Mars and shrinking storm clouds on Jupiter — all worked into story problems which require calculations with pi…)

NASA also honored the day by launching a rocket carrying two American astronauts and a Russian cosmonaut to the International Space Station — at exactly 3:14 p.m.

What’s the perfect time to launch a rocket on #PiDay? 3:14, of course! Tune in starting at 2pm ET to see three humans launch to the @Space_Station for a six-and-a-half month mission. Details: https://t.co/thyIGe26bG pic.twitter.com/rxdbCn7tJv

The Canadian Space Agency joined in too, courtesy of astronaut David Saint-Jacques — who’s in the middle of a 7-month stay in orbit on the International Space Station. The astronaut took a moment to remind us earthlings that Albert Einstein was also born on March 14, by sending back a photograph with an appropriate birthday greeting — floating weightlessly in space.

But as the years roll on, Pi Day is now leading to new traditions, according to a staff writer at AccuWeather.com. “This Pi Day, March 14, female STEM professionals around the United States once again wore purple to bring awareness to the need for more women in science, technology, engineering and math (STEM) careers.”

I got to explain this twice at work today #PiDay pic.twitter.com/0HturyxPLc

It’s a tradition which began in 2016, and many participants shared their thoughts on Twitter with the #DressForSTEM hashtag.

This year also saw a milestone that was bittersweet. This will be the first Pi Day without Larry Shaw, who founded the event back in 1988, according to an obituary in the San Francisco Chronicle. They remember Shaw as a former employee at the Lawrence Livermore National Lab who in 1972 began a 33-year stint at San Francisco’s Exploratorium — and on a staff retreat came up with the idea of honoring Pi on March 14. “For 38 years, Mr. Shaw would don a red cap emblazoned with the magic digits and lead a parade of museum-goers, each of them holding a sign bearing one of the digits of pi.

“Off they would march, in strict order, with 3 in front, and the holder of the decimal point sign next, and then…

SHARE THIS STORY
RELATED STORIES
It's No Longer about How You Write Code but How You Operate It Hacks to Help Open Source Leadership Support Inclusion New Book Identifies 26 Lines of Code that Changed the World Tackling 3 Misconceptions to Mitigate Employee Burnout What Is a Sociotechnical Knowledge Map and Why You Should Care
SHARE THIS STORY
RELATED STORIES
SANS Survey Shows DevSecOps Is Shifting Left  Kathleen Booth, Creator of the First Assembly Language Hacks to Help Open Source Leadership Support Inclusion Slack: How Smart Companies Make the Most of Their Internships Collaborating with Internal Dev Experience and Tool Teams
THE NEW STACK UPDATE A newsletter digest of the week’s most important stories & analyses.
The New stack does not sell your information or share it with unaffiliated third parties. By continuing, you agree to our Terms of Use and Privacy Policy.