How to Build a Billion-Year Library on the Moon 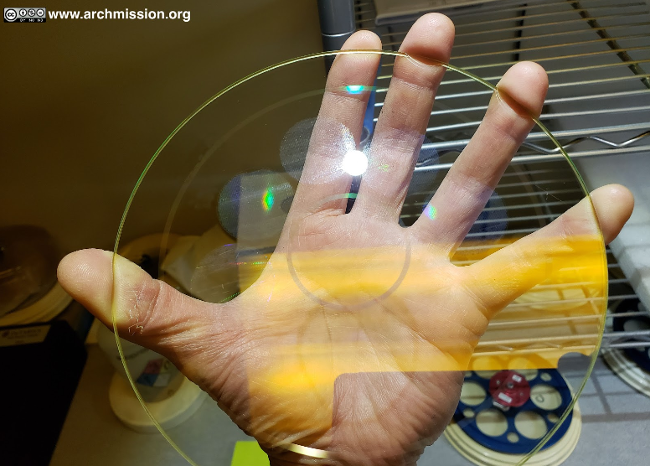 Exploring space has always led us ambitious humans to develop new and interesting technologies along the way — and to collaborate like crazy. And that’s true for the latest project to send off a 30-million page library to the moon to in an effort to preserve civilization for the ages.

The 200GB “Lunar Library” is all stored on 25 nickel disks, each just 40 microns (one 600th of an inch) thick. “Because pure nickel doesn’t decay and has no half-life, it’s basically indestructible, even in space,” points out the How Stuff works website. They add that the top four disks have been etched with 60,000 microscopic images, so the only thing necessary to decode and view them is the proper magnifying technology.

Zooming into one of the low-magnification circles on the Front Cover – Analog 1 – of the Lunar Library. Showing part of the Israel Time Capsule section. More to come… pic.twitter.com/guve83s67e

It’s a new cutting-edge technology called nano fiche, designed to be much more durable than our standard film-based microfiche. The nickel is apparently etched using deep-blue laser technology that’s eventually reduced to a focus point of 100-nanometers, creating text with a point size of 0.003. Each character is 1 micron. “The master is written to glass at 300,000 dpi,” explains the mission’s website, “and then is electrodeposited into nickel.”

A white paper explains that starting from that glass master, “a thin nickel foil is grown by electro­depositing the nickel atom­ by ­atom at the atomic scale.”

The Lunar Library is part of a larger civilization-preserving project by the Arch Mission Foundation, a Los Angeles-based nonprofit co-founded in 2015. The boffins there expect these disks to last billions of years, “if undisturbed, for example, in outer space.” (The melting point of nickel? 1,455 degrees centigrade.)

Of course, the foundation is exploring other forms of storage, including molecular storage in synthetic DNA and encoding data as layers inside quartz silica glass. The site also lists artificial amber as a technology that’s “coming soon” — described as synthetic resins used to preserve DNA for long-term recovery.

The site also describes two other mind-boggling projects that are coming soon:

One of the tools the foundation wants to preserve? A nano fiche reader. 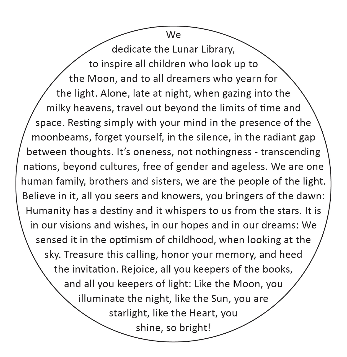 The Arch Mission Foundation boasts an impressive list of partners including several universities and space foundations, as well as both Microsoft and the Paul G. Allen School of Computer Science and Engineering, and the Wikimedia Foundation. But it started with the dreams of two venture capitalists and serial entrepreneurs. Nick Slavin is currently serving as the president and co-founder of Fuzionaire, (one of three companies he’s co-founded since 2016). Slavin started the Arch Mission Foundation with Nova Spivack, who has also founded or co-founded four different companies since 2016, according to his LinkedIn profile. But Spivak “has had a lifelong interest in space and the stars, perhaps in part due to the name his parents gave him,” says his official bio. 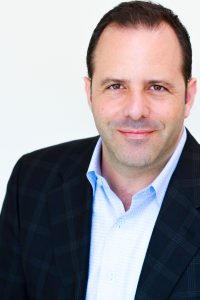 At a young age, Spivak had attended an early launch of the Space Shuttle, and after earning a Bachelor’s degree in philosophy from Oberlin, he’d studied at France’s International Space University (where, according to his LinkedIn profile, he then earned a “Certificate of Space Studies” degree). “One of the early space tourists and space entrepreneurs, he has had a long interest in helping to facilitate the growth of a spacefaring civilization,” his bio notes.

Riding on a Rocket

But the human collaboration was just beginning. In another first, the spacecraft carrying the Lunar Library to the moon in April also wasn’t funded by a government. The New York Times points out the relatively low-budget $100 million Beresheet spacecraft from Israel-based SpaceIL involved a lot of donations from philanthropists (including Las Vegas casino billionaire Sheldon Adelson), along with volunteer labor.

The Times also notes its colorful origin story. It all started with a 2010 Facebook post by 30-year-old computer engineer Yariv Bash asking “Who wants to go to the moon?” Two of his younger friends met him for drinks, and biophysicist Yonatan Weintraub remembers that “As the alcohol levels in our blood increased, we became more determined.”

Soon they’d formed a nonprofit, the Times reports, which was originally planning to build a cheap 12-pound lander to compete for Google’s $20 million Lunar X Prize (to be awarded to the first privately-funded team landing a robot on the moon before March of 2018). But by the time of the launch, it had swollen to 1,300 pounds (including fuel). And after eight years of preparation, their small spacecraft was finally lofted into space in February on the top of one of SpaceX’s Falcon 9 rockets (launching from Florida at Cape Canaveral’s Air Force Station).

Three missions. Two of them on @spacex rockets. Hey @elonmusk – thanks man.

The Times reports their plan as circling the earth in wider and wider circles, eventually dropping into a lunar orbit through “a long and winding, four million-mile-long journey,” even though the moon itself is only 238,900 miles away. Along the way, it will measure the moon’s magnetic fields.

This isn’t the Arch Mission’s only attempt to back up humanity’s knowledge. CNET notes other triumphs — the quartz disk carrying a copy of Isaac Asimov’s Foundation Trilogy in the Tesla Roadster that was blasted into space in 2018, or the digital copy of Wikipedia carried by one of the miniature satellites from SpaceChain, the ambitious open-source satellite network.

And earlier this month the Arch Mission Foundation announced that it is also teaming up with Hypergiant Galactic Systems to launch a series of satellites around the solar system in 2020 to create an Interplanetary Internet, equipped with sophisticated AI systems to target data broadcasts to the other space-based internet nodes in real-time. And using blockchain-powered data synchronization, the satellite system will perform its first proof-of-concept test using the Arch Mission Billion Year Archive.

“Our partnership with Hypergiant and their smart satellite platform in particular allows us to send updates continuously from Earth, and also for that data to be retrievable from Earth in the case of a cataclysmic event…” Spivack announced in early March. “With Hypergiant, we are developing AI that can intelligently communicate the knowledge on these satellites back to Earth if it is ever needed.”

CNET reports that the Arch Mission Foundation also plans to establish archives on Mars — and deep down in earth’s underground caves.

So what’s on the disk? The foundation announced that their “Lunar Library” includes 30 million pages of earth text — including the entire English version of Wikipedia, generous samplings from Project Gutenberg and the Internet Archive, and the Long Now Foundation Rosetta and PanLex datasets, “which provide a linguistic key to 5000 languages with 1.5 billion cross-language translations.”

The Lunar Library also contains content from our advisors – including the full text of Stephen Wolfram’s, “A New Kind of Science,” Frank White’s, “The Overview Effect,” and Lewis Dartnell’s, “The Knowledge” @stephen_wolfram @OverviewEffect @WolframResearch @lewis_dartnell

The first disk could be read with a magnifying glass, though the next three disks require 1000X magnification. These four disks are considered the “analog” layer and include a time-capsule from SpaceIL describing the culture and history of Israel, along with songs and drawings by children, plus a “Primer” from the Long Now Foundation that uses pictures to teach over a million concepts with their corresponding word in major languages.

Then there’s an instruction manual for how to read the rest of the disks — “a series of documents that teach the technical specifications, file formats, and scientific and engineering knowledge necessary to access, decode and understand, the digital information.” In the project’s official white paper, one file is described as “The Arch Foundation SpaceIL Mission ReadMe”.

In sum, there’s 100GBs of “highly compressed” data, which decompresses into almost 200GBs, “including the text and XML of the English Wikipedia, plus tens of thousands of PDFs of books ”

It even includes a special collection on computers and semiconductors…

The mere fact that @archmission is sending an archive to the Moon, for beings millions of years in our future, means there is a higher probability that there may be another archive somewhere on the Moon, left for us by someone else, millions of years ago. #mindbender

The Lunar Library’s official web page teases that there’s actually more that are being stored in their disks on the moon, which “will be revealed in coming months and years.”

But we already know that the mayor of Austin, Texas added a delicious recipe for queso, reports the Austin Chronicle, in a digitized letter which also informs aliens and future civilizations that Austin is “way cooler” than Hollywood and New York.

The Lunar Library itself has also provoked some wry comments. “Any aliens who come across it in the future will surely be baffled by a few choice entries, like ‘moon-landing conspiracy theories,’ ‘flat Earth’ or ‘Tide pod challenge,'” jokes CNET.

“But at least they’ll help illustrate why we needed a backup.”

If you want to leave a message such that in millions of years, if there is a spacefaring civilization on Earth, the message will be discovered by them, the Moon is one of several logical places to put it.

SHARE THIS STORY
RELATED STORIES
Wellspring of Creativity: Why Public Domain Matters Snack Stack: Turning Winter Comfort Food up to 11 SRE Housekeeping: Where to Get Started for New Hires It Happened to Me: How I Suddenly Owed AWS $13,000... How We Manage Incident Response at Honeycomb
SHARE THIS STORY
RELATED STORIES
2022 in Review: AI, IT Armies, and Poems about Food 2023 Will Be the Year FinOps Shifts Left Toward Engineering Entrepreneurship for Engineers: Avoiding Feature Bloat Java's James Gosling on Fame, Freedom, Failure Modes and Fun Snack Stack: Turning Winter Comfort Food up to 11
THE NEW STACK UPDATE A newsletter digest of the week’s most important stories & analyses.
The New stack does not sell your information or share it with unaffiliated third parties. By continuing, you agree to our Terms of Use and Privacy Policy.