How to Design Inclusion into a Tech Event 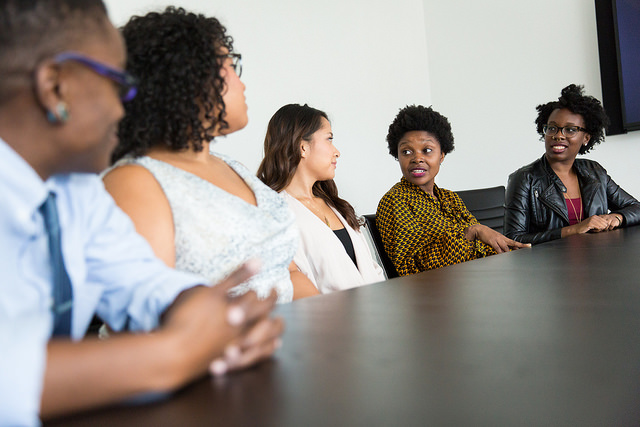 At every tech event I attend, I take a picture of the ladies’ room. And it turns out I’m not alone. It’s not that I’m a creeper, it’s just that at all but one, I’ve been alone. Now, of course, I appreciate not having to queue, but there seems to be this huge gap between messaging of accessibility, diversity and inclusion at tech events — and in the tech industry in general — and the reality. Sure, there seems to be an increasing amount of representation on-stage, particularly in the last two years, but the audience is remains overwhelmingly male and predominantly white.

Women 👏 in 👏 tech 👏. Come on down- the bathroom lines are still non-existent 🚽 pic.twitter.com/M4l880vAs2

I asked a massive Women-in-Tech Slack community why they hesitate to attend tech conferences. Responses varied, but the cost stood out, whether you were speaking at or just attending.

Respondents said that managers didn’t call out female employees to encourage attending more conferences, and some women admitted not being good at speaking out and requesting. If they weren’t speakers, they had to justify the cost of the ticket. Everyone also complained of the cost of taking time off, travel, accommodation and childcare, which remained even if they were able to access a free ticket.

Having access to child care was a major reason many said they didn’t attend tech events — and it’s a surprisingly small expense, averaging about half the cost of much more prevalent live captioning.

I won't be speaking at / organising events anymore.

As a solo parent, it's really hard to bring travel & family life together. I also feel, I've accomplished all I wanted & want to find new ways to support the community.

Some said that if a speaker list isn’t reasonably diverse, they’ll give it a pass, while others said they need a guaranteed quiet space to cope with anxiety that large events can bring on.

For the sake of this article, let’s argue that the problem isn’t intent. Let’s assume tech companies and tech conferences really are starting to understand that it’s not only right to embrace diversity, but that it benefits the bottom line through increased innovation, among other benefits. Let’s assume they want to be more accessible and diverse — they just don’t know how.

So just how do you make your tech conference welcoming and diverse? Today we begin to tackle that problem with proactive steps folks are taking and measuring to make a difference.

what is it about your company/culture/job posting that doesn't attract us? why aren't you fixing it?

Diversity on Stage, But Not in the Audience

At least here in London, there does seem to be an effort toward gender parity on-stage at several tech events. This does not seem to carry into the audience. It also doesn’t address the usually very white-washed stage and audience.

Paula Kennedy is on the DevOpsDays London committee and speaks at a lot of other conferences, with her main motivation to inspire others to speak because, as the book title reads, you can’t be what you can’t see.

I was always terrified of public speaking, avoided at all costs. Turning point was giving the eulogy at my Mum’s funeral in 2013, I knew I wanted to tell everyone how amazing she was. Now whenever I present, I always imagine her at the back of the room listening to me & smiling.

Kennedy told The New Stack, “When I do go to conferences and meetups it’s kind of the same faces that you see. I identify as female and I still don’t see that many female presenters.”

In 2017 she was approached to get involved with DevOpsDays, which sets the goal to be a very accessible conference. But what does that even mean?

“A diverse lineup of speakers is one thing. We try to be diverse but we’ve ended up focusing more on gender diversity than other measures of diversity,” Kennedy said.

A part of a growing trend, at least in the tech space, DevOpsDays London works to give away a lot of tickets, reaching out to groups like Women Who Code and Black Girls Code. When the conference organizers had leftover money, they decided to give away even more tickets in 2018, allowing anyone to self-identify as under-represented or unwaged.

In 2018 DevOpsDays increased its inclusion focus with all-gender toilets and color-coded lanyards for pronoun usage and communication and photography preferences. While this was well-received, Kennedy admitted it may have over-complicated the registration process and the volunteers running the table didn’t understand the intent.

Most #inclusive event ever? So impressed how @devopsdaysldn #DevOpsDays planned for #signlanguage and closed captioning, nametags with preferred pronouns and communication, and color coded lanyards to say if you want to be photographed. pic.twitter.com/UrYc6sZaIf

The organizers also provided nanny services, sign language translation, and closed captioning both years, but perhaps didn’t broadcast that well enough to be taken advantage of.

Despite all these efforts and positive feedback about the changes, attendance was 80 percent male both years.

“It’s disappointing as organizers that we really tried to give away tickets to anyone who identified as underrepresented,” Kennedy said, when she talked about this topic at this year’s Monki Gras:

Budgets are usually in conflict with a desire to be accessible. A good way to prioritize, when you are selling or giving away tickets, ask what makes it difficult for someone to attend.

Last year was the first year Anne Currie ran the Coed Ethics tech ethics conference. She just delegated a pot of money to pay for anything that’s blocking someone from showing up. With her own Multiple Sclerosis, having the cost of a taxi to an event covered makes it much more likely that she can attend — although she is transparent that her illness can mean plans can change very quickly. In the end, her conference included a British sign language translator and closed captioning.

At the more established DevOpsDays, “We tried instead to think of all the things and pay for all the things so someone would use it or not. And even if people didn’t use it this year, it’ll spread the word for next year,” Kennedy said.

This meant they spent significant money on the central London location of the Queen Elizabeth II Centre, which it has accessibility information all over the website and allows for adaptations like gender-neutral facilities and flexible catering options.

DevOpsDays London also provided live captioning and a certified childcare room, but neither have been taken advantage of much yet.

Monki Gras is a London-based software craft conference. This year, with the theme of accessibility, there was no doubt the location had to follow suit. Conference founder James Governor literally walked the walk to make sure the public transit, walking, and wheelchair-ed paths to each prospect venue wasn’t filled with cobblestones and potholes, but elevators and ramps. That’s how they moved from a trendy, central London railway arch in Shoreditch to East London’s Plexal, a workspace that is home to many disability-focused organizations, which is set up for just about any attendee’s need.

Even on a volunteer event committee, someone should be tasked with making sure diversity, inclusion and accessibility are consistently part of each planning step.

Monki Gras offers a diversity and inclusion (D&I) sponsorship, this year sponsored by DigitalOcean. With this, they are not only able to sponsor dozens of free tickets, but they are also able to have a dedicated person run their D&I and mentorship program before and during the event.

In addition, the organizers followed Serverlessconf in offering a special ticket price so that attendees can also contribute to a D&I attendee’s ticket.

Part of D&I Program Manager Samantha Burke’s job is to reach out to various communities and Meetups, like Code Your Future, Ada’s List, Codebar and Muslamic Makers to encourage people from a broader range of backgrounds to come along.

“You have to do outreach, inclusion doesn’t happen by itself,” Governor said. “On the form we try and keep it as open as possible. We’re not here to judge people, but we do like to ask why they should be allotted a ticket.”

But how do you measure D&I success without tokenizing people?

Burke said she wants to know if people are happy and if they will return the following year.

“I was overwhelmed with all the smiles and hugs I received during the event, and the emails and messages on Slack afterwards, thanking the community for being so welcoming,” Burke said.

Burke continued sharing that two of this year’s D&I mentors attended the program last year, many attendees had attended at least one previous Monki Gras, “and those that couldn’t return promoted the heck out of it. A few from last year even bought ‘Support a D&I Attendee’ tickets.”

For 2019, DevOpsDays London is also bringing everything forward to allow for more time for more personal outreach to Meetups, and to allow everyone to have the schedule earlier and to plan farther ahead like asking for and justifying that time off.

“Last year our bright hope was that we’re giving away so many tickets that it’s going to balance out. Where we seemed to fail, where we’ve reached out to these particular Meetup groups that have this particular audience — ‘Here’s ten free tickets’ — There hasn’t been a great take-up,” Kennedy said.

She believes it’s important to show up at Meetups to pitch the event and interact with these communities.

The DevOpsDays Call for Speakers is open and they’ve made accessibility their number one focus.

OK, We’ve Got Women, Is Our Diversity Work Done?

While male-female ratio, at least on the surface, is simple to measure, it’s just the tip of the inclusive iceberg.

Open Source and Communities Strategist at Mozilla Emma Irwin says that the first step to building inclusiveness into their flagship event MozFest was hosting multilingual sessions, as the English language can be very excluding in open-source communities.

Mozilla also provides live captioning at their plenary talks and all-hands meetings, which has a Curb Cut Effect where designing for accessibility has many benefits. This doesn’t just help the hearing-impaired OS community members, but this transcript-on-demand allows for talks to be translated quickly. 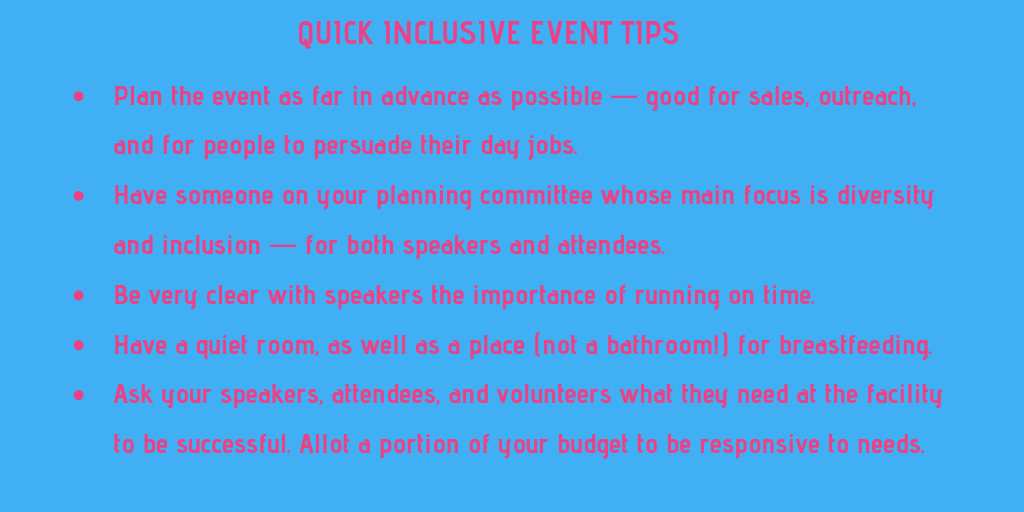 Everyone seems to struggle to persuade their employers to not only get the day off but to cover ticket costs. Another London tech conference QCon offers a useful templated letter to help with this.

The event Code of Conduct plays an important role because attendees often don’t even know this reference for what creates a harassment-free environment exists. Furthermore, if something is reported, is it effective? Are people asked to leave or the situation resolved?

DevOpsDays includes a mandatory checkbox that says you read and committed to the Code of Conduct as part of your registration process. They also read that code aloud on stage at the start of each conference day. They’ve only had one major violation to date, and that was someone working a sponsored booth.

While neurodiversity is well-represented in the tech industry, events are not well-designed for it. Disturbing strobe lights still flash on stages. Conferences can be overwhelmingly loud, and lack quiet rooms. Most importantly, conferences that run over schedule don’t allow for people to plan for much-needed pauses.

This is a similar problem for carers who have to leave conferences that run over to do pick-ups.

One final note for designing inclusive events — don’t give up! So many conferences try something once, poorly advertise it, and then take it away the next year. If you are offering a service like child care, captioning or translation, or subsidizing transport for those that need it, you need to heavily advertise it. And you need to do it year after year so people will start to use these offerings.

As Kennedy said, “It’s not been perfect, but we keep trying.”

That’s not a bad way to start!