How to Use BOLT, Binary Optimization and Layout Tool

A look at how this post-link optimizer developed to speed up large applications can be a simpler way to achieve better code layout.
Dec 23rd, 2022 9:00am by Won Jong Jeon 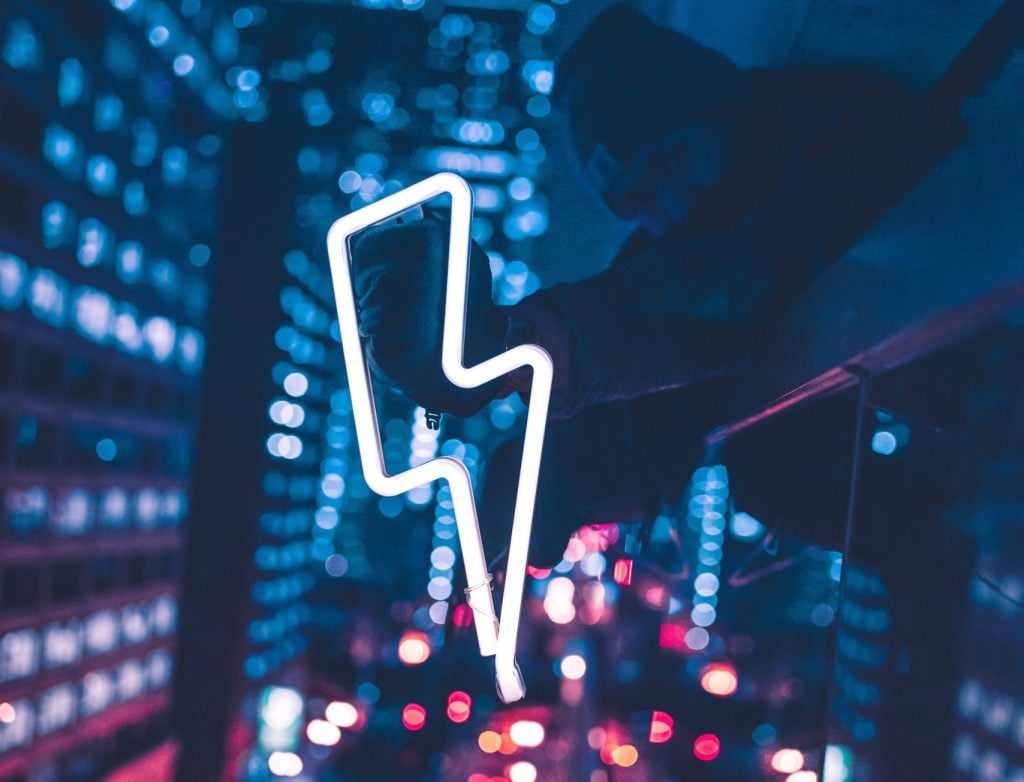 Data center applications are generally very large and complex, which makes code layout an important optimization to improve their performance. Such a technique for code layout is called feedback-driven optimizations (FDO) or profile-guided optimizations (PGO). However, due to their large sizes, applying FDO to these applications leads to scalability issues due to significant memory and computation usage and cost, which makes this technique practically impossible.

To overcome this scalability issue, the use of sample-based profiling techniques have been introduced by different systems, such as Ispike, AutoFDO and HFSort. Some of them are applied to multiple points in the compilation chain, such as AutoFDO to compilation time, LIPO and HFSort to link time and Ispike to post-link time. Among them, the post-link optimizers have been relatively unpopular compared to the compile-time ones, since the profile data is injected in the late phase of the compilation chain.

However, BOLT demonstrates that the post-link optimizations are still useful because injecting the profile data later enables more accurate use of the information for better code layout, and mapping the profile data, which is collected at the binary level, back to the binary level (instead of the  compiler’s intermediate representation) is much simpler, resulting in efficient low-level optimizations such as code layout.

It’s not to be confused with the open source tool from Puppet to run ad-hoc commands and scripts across infrastructure, which is also called Bolt.

Q. What does BOLT stand for?
A. Binary Optimization and Layout Tool

Q. What does BOLT do?
A. BOLT has the following rewriting pipeline for a given executable binary:

Q. Can any of the optimization techniques be moved to earlier phases of compilation?
A. It depends on the situation.

Q. Why does BOLT run on the binary level but not on the source code level or compiler IR level?
A. First, profiling data typically collects binary-level events, and there are challenges in mapping such events to higher-level code representation. Figure 1 shows such a challenge. 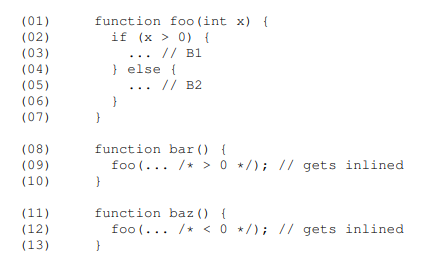 Figure 1. An example of a challenge in mapping binary-level events back to higher-level code representations

Q. Why is BOLT implemented as a separate tool?
A. There are two reasons:

Q. Which profiling data does BOLT use?
A. BOLT uses Linux perf utility to collect training input, including:

Please refer to the details of perf events here.

Q. What applications were tested to benchmark BOLT?
A. Larger applications (more than 100MB). It is better to aggressively reduce I-cache occupation, since the cache is one of the most constrained resources in the data center space. The followings are tested by Facebook using BOLT:

The original research paper was published by CGO 2019 by Facebook engineers. The source code has been released and maintained at GitHub since 2015. The BOLT project was added to the mainstream of the LLVM project version 14 in March.

BOLT operates on x86-64 and AAarch64 ELF binaries. The binaries should have an unstripped symbol table; to get maximum performance gains, they should be linked with relocations (--emit-relocs or –q linker flag).

The latest code commits were done four months ago, and they are non-functional changes.

How to Build and Test BOLT

This section describes how to build BOLT and test with simple executables.

Note that you might need to modify the PATH variable in your environment to include ./llvm-bolt/build/bin.

Step 3. Build an executable from t.cc.

Note that you might need to grant users permission to execute perf.

Step 7. Compare the file size and the execution time for t and t.bolt.

In their research paper, the Facebook teams use two categories of binaries to evaluate BOLT. The first is the actual workloads running on Facebook’s data centers. They are (1) HHVM, the PHP/Hack virtual machine, (2) TAO, a distributed, in-memory, data-caching service, (3) Proxygen, a cluster load balancer built on top of the same open source library and (4) Multifeed, a service for Facebook News Feed. The second category of binaries are (1) Clang and (2) GCC compilers.

First, we tried to use the engine for our targeting binary to optimize. Javascript engine is an in-house JavaScript runtime engine developed by Futurewei Technologies. Two workloads were used for Maple JavaScript: First one is prime.js which finds prime numbers less than 1 million, and the second is 3d-cube.js, which performs matrix computations for rotating a 3D cube.

Step 1: The Cmake build script must be changed to keep relocations in the executable file.

Step 2: Build the binary for the Maple JavaScript engine.

Step 3: Modify the run script to get profile data.

Step 5: Get profile data by running prime.js with the Maple JavaScript engine.

Step 9: Compare the file size and the execution time.

So we decided to use the same benchmark workload used in the paper on our setup, which was Clang compiler. The detailed steps to reproduce the result presented in the paper was documented in the BOLT’s Github repository. Most of the steps were identical, but the later version 14 of Clang was selected instead of Clang 7. Here is the summary of the setup.

The main purpose of this test is to identify how much performance benefits come from what optimization options of BOLT. PGO+LTO, which enables the basic optimization based on PGO and LTO that are supported by LLVM, was selected as a baseline of the performance comparison. 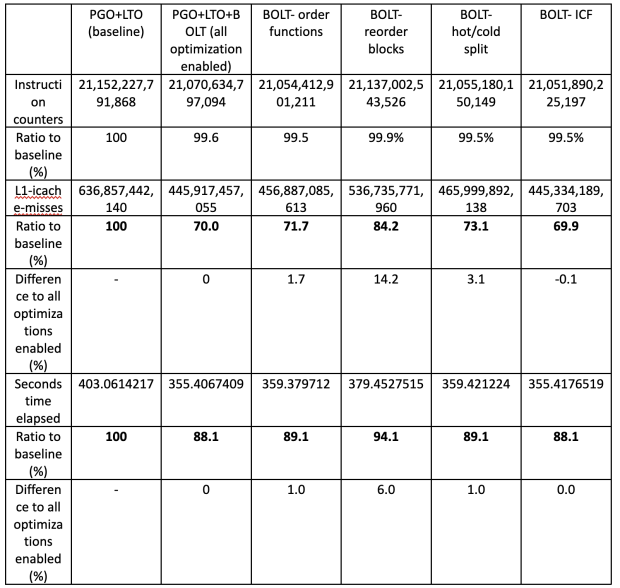 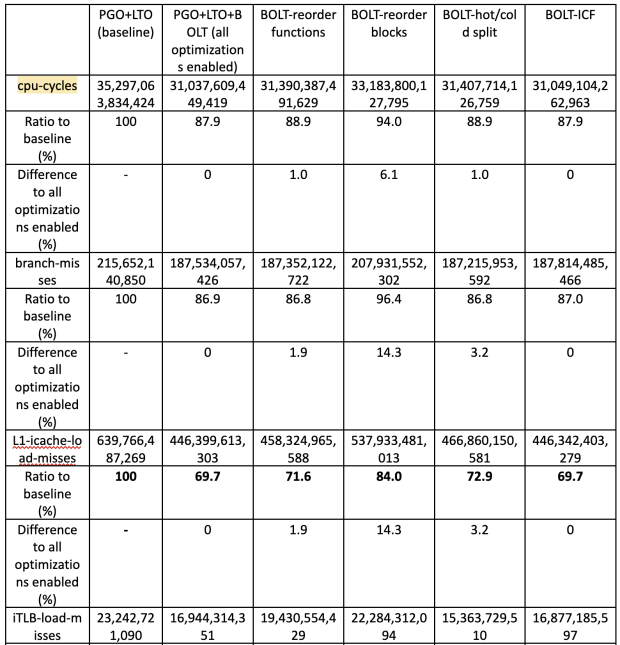 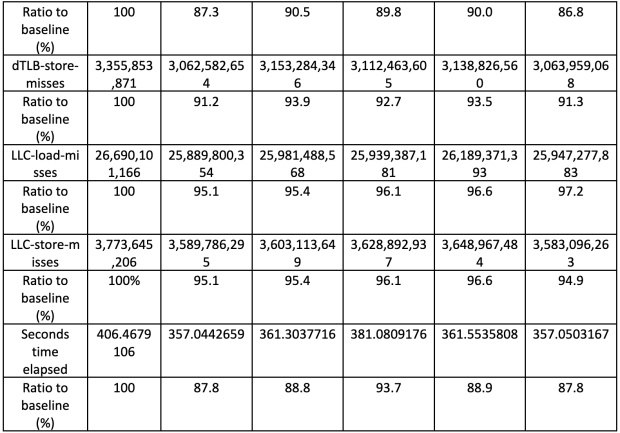 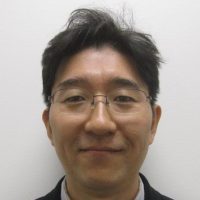