How VisiCalc’s Spreadsheets Changed the World

It's the 40th anniversary of VisiCalc, the first popular spreadsheet program, and the anniversary has prompted some new remembrances of the killer app that, true to its "power to the people" origins, got people playing with data – and, by popularizing personal computers, helped to change the world.
Jun 2nd, 2019 6:00am by David Cassel 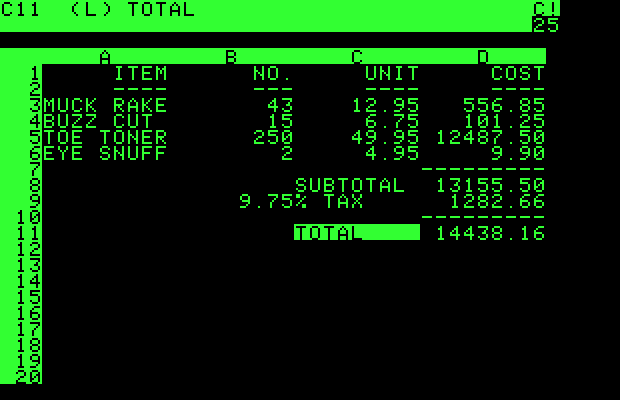 It’s the 40th anniversary of VisiCalc, the first popular spreadsheet program, and the anniversary has prompted some new remembrances of the killer app that, true to its “power to the people” origins, got people playing with data — and, by popularizing personal computers, helped to change the world.

The first ads for VisiCalc appeared in the May 1979 issue of Byte magazine, remembers co-creator Dan Bricklin on his personal web site. Another page remembers that that same month VisiCalc was also demoed at San Francisco’s West Coast Computer Faire. It was formally announced to the public in June of 1979 at the National Computer Conference in New York City.

“We first shipped about five copies of version 1.35 to some early customers in the late summer of 1979,” writes Bricklin — adding “I hand typed the labels.”

But the story really begins a year earlier in 1978, as Bricklin was watching his professor at Harvard Business School updating a grid of numbers by hand on a chalkboard…

Birth of a Notion

In fact, years ago the word “spreadsheet” originally meant a hand-written table scrawled across both pages of an open ledger book. In a 2016 TED talk, Bricklin remembers how his father Baruch Bricklin even used ledger spreadsheets to run his small printing business in Philadelphia. “That’s the way it was done for hundreds of years.”

But in that fateful summer of 1978 — on a bike ride in Martha’s Vineyard — Bricklin decided he wanted to create a software company after he’d earned his MBA, according to his site. Ironically, he drew one of his diagrams for VisiCalc on the back of paper from an actual ledger spreadsheet. 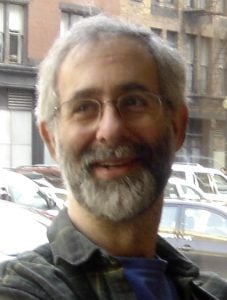 Bricklin writes that he even got advice from some of his professors. Professor Barbara Jackson told him to go after simple use-case scenarios, because he’d be competing with the backs of envelopes. Bricklin teamed up with Bob Frankston — who he met as an MIT undergraduate working on the Multics project — while continuing his studies at business school.

It’s nice to see that Bricklin’s site has preserved the software’s origin story. Together the two young geeks created the first prototype in one weekend, with Frankston entering code on a borrowed Apple II. It used the Apple II’s game paddle to move the cursor — and used the “fire” button to change from horizontal to vertical scrolling. Soon that was changed to navigating with the two arrow keys on the keyboard, where it was the space bar that changed the scrolling direction.

When VisiCalc was finally ready to show to the public, it was Bricklin’s father who printed up a marketing brochure at the family print business.

Steve Jobs once called the invention of VisiCalc an “explosion that propelled the industry forward.”

In fact, Bricklin told his TED audience that Jobs had always graciously credited the role VisiCalc played in the success of Apple, sharing two of his favorite quotes from Steve Jobs.

“It is widely thought to be the first ‘killer app’,” argued the BBC — but its significance may have been even greater.

A blurb on the back of Bricklin’s biography cites Microsoft’s Chief Software Architect Ray Ozzie as saying that “few have contributed more than Dan to making computing technology a part of our everyday lives,” and that “his groundbreaking work was a key catalyst of the PC revolution.”

In a 2012 article in the Harvard Gazette, Bricklin remembers that at the time, “Computers were not something used by the average person, any more than a nuclear reactor is something that’s used by a regular person today.”

Looking back, it was an entirely different world. “Using a keyboard, even on a typewriter, wasn’t a common thing for most people in business; there were secretaries or steno pools.” 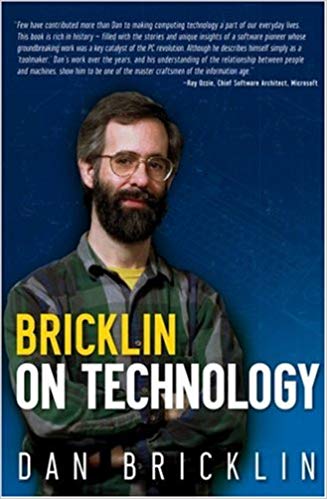 In his biography, Bricklin also writes that even when personal computers came along, they were “typically viewed as toys for hobbyists by the makers and users of the larger mainframes and minicomputers.”

Apple executive Jean-Louis Gassée, for example, has written that the day he saw his first VisiCalc demo in 1981 “was the day I realized that you didn’t have to be a programmer anymore to use a computer.”

Peter R. Jennings author of the popular MicroChess program and a co-founder of the company that produced VisiCalc, has also blogged about the program’s significance, calling it part of a larger cultural mission of empowering individuals. “Almost everyone involved in the personal computer revolution was a child of the sixties. We arrived on the scene with a mission to change the world…”

Yes, it amplified business intelligence — but that trickled down to everyone. “The ability to ask ‘what if?’ brings out the inner child who wants to play with the data and the result is inspiration, creativity and effortless learning.”

Bricklin describes a moment to the Gazette when he realized just how popular the software had become. “The first time I got the feeling that we had made it was when the Wall Street Journal ran an editorial about Reagan’s budget, and it said there were legal pads and VisiCalc spreadsheets all over Washington trying to figure out how the budget would work.”

Ultimately, other VisiCalc-derived spreadsheet programs would dominate the business and personal number-crunching markets market — notably Lotus 1-2-3 and Microsoft Excel. But who knows if they would even exist if not for VisiCalc.

Somewhere in that same lecture hall at the Harvard Business School, there’s now a plaque commemorating the place where Bricklin came up with the idea. It tells future Harvard MBAs that VisiCalc was the “original ‘killer app’ of the information age,” and that it “forever changed how people use computers in business.”

“But it also serves as a reminder,” Bricklin told the audience for his TED talk. “That you too should take your unique backgrounds, skills, and needs, and build prototypes to discover and work out the key problems — and through that, change the world.”

Is there another message for the technology world of today? In the BBC series “50 Things That Made the Modern Economy,” Tim Hartford cites a report from the Planet Money podcast which found that there are now 400,000 fewer accounting clerks than in 1980 — but there’s also 600,000 more regular accountants. “Crunching numbers had become cheaper, more versatile, and more powerful, so demand went up,” Hartford writes.

“Sometimes automation creates jobs and sometimes it destroys them. The point is that automation reshapes the workplace in much subtler ways than ‘a robot took my job’. In the age of the spreadsheet, the repetitive, routine parts of accountancy disappeared.”

Hartford also writes that the existence of the spreadsheet created new jobs, and even “whole new industries” — for example, scenario-crunching math modeling for high finance companies. He says this helps show that technology “doesn’t usually take jobs wholesale — it chisels away the easily automated chunks, leaving humans to adapt to the rest…

“It is hard to conclude this trend won’t continue across other sectors.”