HPE Discover 2015: All About the Enterprise DevOps, Decreasing Builds That Fail Testing 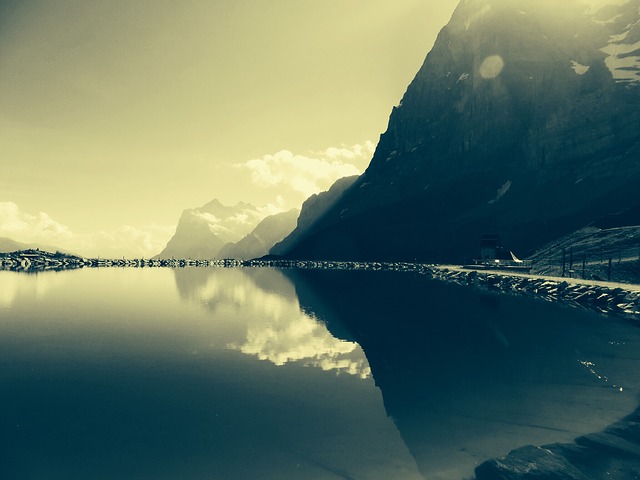 As cloud based technology continues to impact the enterprise, more solutions are being offered that benefit not only customers, but improve the quality of life for developers as well. Streamlining the pipeline to production can have significant impacts not only on solving challenges, but ensuring that potential issues will not impact an entire branch of code.

At HPE Discover 2015, HPE showed off Verigreen, StormRunner and its Helion cloud services, all of which could narrow the gap between developers, engineers, and operational folks.

The Power of DevOps

While at HP Discover, Gene Kim, cofounder of Tripwire and all-around DevOps expert, gave a presentation on leading the enterprise by embracing all DevOps can offer. As developers continue to diversify their workflows, the gap between engineers, developers and operations continues to narrow. More often than not, developers will get their hands dirty working on operations tasks that may require out-of-the-box thinking when embracing new technology in an enterprise-level environment.

“DevOps is as good for operations as it is for development,” said Kim.

When working in DevOps, deploys-per-day are the standard marker by which a team’s productivity is measured. Companies such as Amazon and Etsy are deploying code measured in seconds — not minutes, hours, or weeks. HP Verigreen is an open source gated-check solution that offers an automated approach to testing, CI, and CD while also aiming to decrease the amount of builds that fail testing.

“DevOps is not just for unicorns, but horses as well. These large, complex organizations have been around for decades, now adopting the same principles one would see in Google or Facebook and getting the same outcomes,” said Kim.

Initially, internal R&D for HP enterprise developers was conducted with Verigreen, in the hopes of evaluating the development pipeline and replacing any weak links that were found. The gated check-in system used in Verigreen keeps bad code from breaking environments across the organization.

Verigreen intercepts incoming requests, evaluating them to be included in a protected branch of a repository. If a commit is verified to be for a protected branch, it is then rejected, notifying the developer that committed that verification has begun.

As the check continues, a temporary branch is created off of the latest code, which then merges the committed code verification into Jenkins. If verification succeeds, the branch will become new code which all later commits will build upon. When working at scale, temporary branches help reduce the resources used by Jenkins. Since implementing Verigreen internally, HP has over 300 developers using the software, which has intercepted 30 percent of build breaks while increasing commit ratios by 20 percent.

As enterprises become more developer centric, there must be a balance between productivity and time spent setting up other systems or software. Verigreen is run entirely server-side, with developers not having to install anything, able to commit from any platform and still have their commits intercepted for verification.

Kim notes that for companies hoping to use Verigreen, it is helpful to already have a mature Jenkins stack running that should also have a mature CI system with a short feedback loop. The gate check verification concept allows for developers to run partial builds based on code which has actually changed, which is helpful for those working in hybrid or legacy systems. As Verigreen is open source, there are no limits as to how businesses can adapt this software to suit their own needs.

The journey to open-sourcing Verigreen has been, “Great,” according to HPE DevOps architect Eitan Schichmanter, who was interviewed by New Stack Founder Alex Williams at the conference. Initially, the choice to open source the software was built off the desire to promote the concept of gate check verification, contributing to the open source  software community, and establish HP engineers a trusted resource in the community. 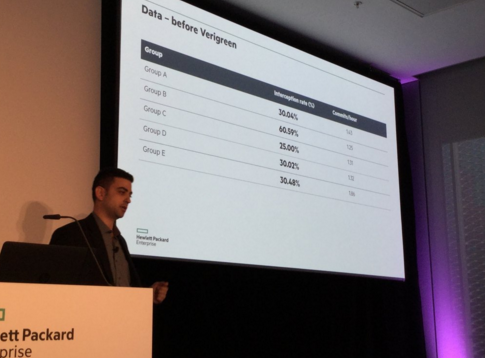 The reception from the community was a surprise, as the Verigreen team quickly saw friends and coworkers spreading the word about the project. Soon, calls were arriving from external customers with inquiries about adopting Verigreen into their own technology stack. Having worked alongside Jerome Labat, the CTO for HP Enterprise software in developing Verigreen, to see people using it was a much-appreciated display of support from the OSS community.

“Currently, there are over 300 developers using Verigreen, with 9,200 commits. We’re up to 21 percent intercepted build breaks, with a 24 percent increase in commits per day,” said Schichmanter. Verigreen has helped to not only increase developer efficiency, but reduce batch sizes and code breaks. As more projects continue to embrace it, Schichmanter sees first hand the impact of Verigreen’s gate check verification in action.

Teams using the software have become more resilient and productive, able to push new features out faster. However, Schichmanter notes that the best thing about Verigreen is its adaptability. Regardless of if one’s project is running on a hybrid system or is fully integrated into the cloud, Verigreen can still be installed to help one’s team accomplish the same goals as HP’s internal testing of the software has.

Cloud-based software continues to become a more mainstream option for enterprise-level organizations. HP has amassed a variety of offerings that help to bring cloud technology to government, financial institutions, and large agencies that may have resisted working in the cloud previously. “Software is shaping the world, driving it forward in every facet of life. If you don’t solve a problem, someone else will,” said Mishra. 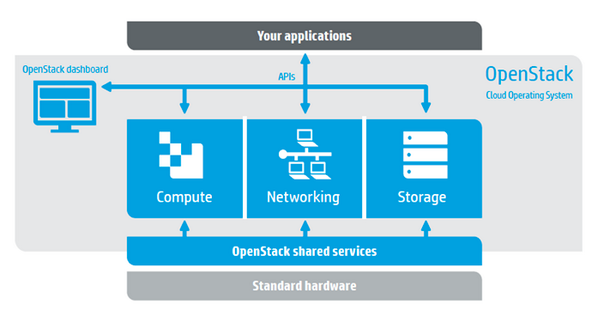 Hybrid environments have become commonplace in today’s enterprise. Organizations often balance private and public clouds with a PaaS setup to deploy code between legacy projects and those which are tooled for working in the cloud.

“We want to enhance the notion of transformation. Transformation is a process. It’s  an event, not an activity,” said Mishra when discussing transforming enterprise stacks into the future. As more businesses move to embrace cloud-based offerings, the need to upgrade pieces of a development stack while not losing years of prior work remains a concern for many businesses working, particularly with older legacy applications and dedicated physical server setups.

Enterprise developers are often seen as experts in their field, bringing with them years of hands-on expertise which can only be gained from working with a language, framework, or tool over time. Mishra and the HP Helion team noted that they were asked to create a poly-cloud platform which was language and framework agnostic to meet the needs of these team members.

Many developers were working in the .NET programming language, with over 45 percent of these developers needing Helion to not only support .NET but run native windows applications. Helion is further bolstered by its adoption of containers, allowing for unification of many smaller project components into a central location that can be accessed and run across a variety of platforms, both private and public clouds. 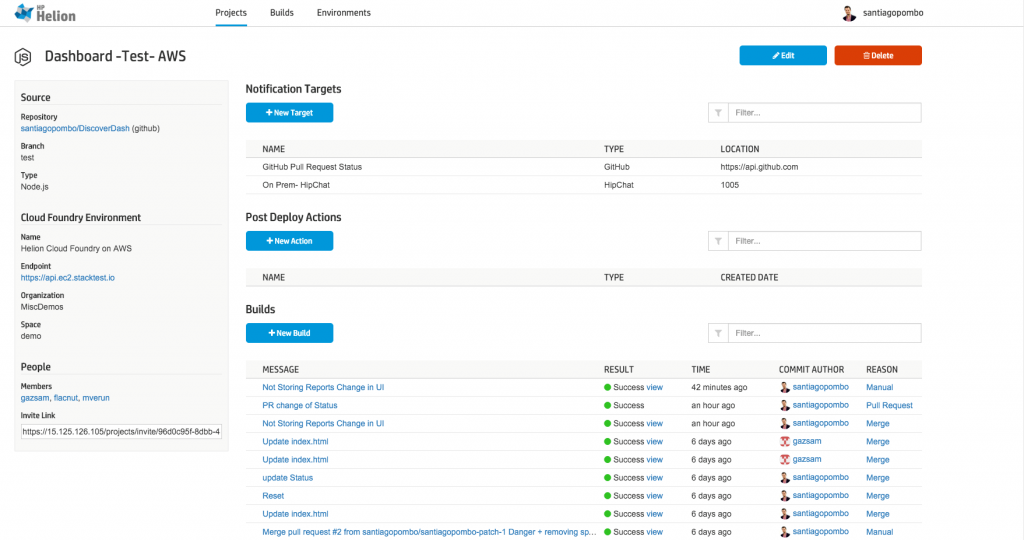 When a developer submits changes to an application in Helion, listeners on the repository will detect those changes and begin the build process automatically. Once the build occurs, Helion Code Engine takes the testing framework, picks up the test cases and runs them.

If these tests pass, there is the option of alert testing as well. StormRunner is also integrated into Helion, allowing for testing how an application handles loads before it is deployed. Offering multi-cloud solutions using containers enabled HP to, meet developers where they are today versus pointing them to a point in the future and saying, ‘Come meet us over there,’” said Mishra.

Listen to Williams’ interview with Mishra:

When working with enterprises, developers are now brought into the decision-making process alongside executives, notes Mishra. This is perhaps one of the most clear definitions of the future when compared with decision making in the past. Developers are seen as crucial parts of the process, able to offer their expertise on business improvements, team morale, and productivity.

As technology continues to advance, DevOps will become a crucial part of enterprise level software development, requiring a technology stack which is able to adapt to the needs of ever-changing scenarios on a daily basis. HPE Discover 2015 showcased not only some of the technologies available to businesses looking to upgrade to cloud-based software platforms, but also highlighted the needs of those working in DevOps.

To subscribe to The New Stack Makers podcast or check out other episodes, visit the podcast section of The New Stack.