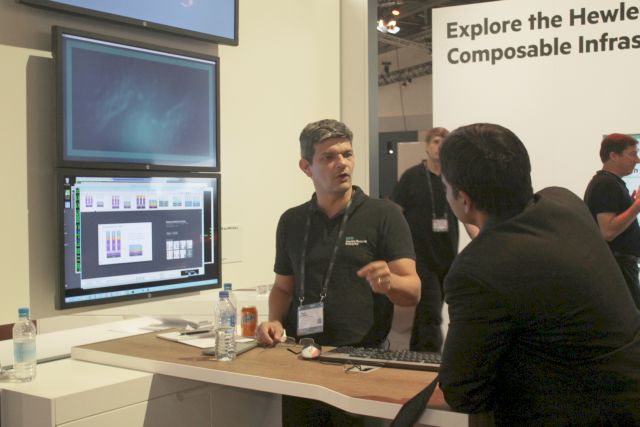 Hewlett Packard Enterprise’s new Synergy line of server hardware, announced at its Discover 2015 conference in London on Tuesday and due to ship next year, will enable both developers and administrators to provision chunks of infrastructure — compute, storage, memory, and networking resources — from bare-metal server platforms.

“We’ve got an architecture which is composed of three parts, a structure that boots up ready for any workload,” explained HPE Chief Strategist Chris Cosgrave during a session on Wednesday, “a fluid resource pool of storage, compute, and fabric. You can do containerization, you can do virtualization, [with] bare metal [and] any form of storage there.

“It’s about software-defined infrastructure: embedding software-defined intelligence in the hardware, with workload templates which help you define the provisioning the updates, the de-provisioning of the infrastructure in an instant,” Cosgrave continued. “It’s about a unified API: taking all these capabilities, and basically making them available through a single API, through a single line of code.”

But would developers be willing to accept a new way of provisioning systems for containers, based on a traditional platform used by system administrators? Sure, it appeared from the outset that OneView will integrate with Docker Machine, but will OneView integrate with the environments in which containers thrive — the orchestrated environments of Kubernetes, Mesosphere, and Marathon? These are the questions we’d been putting to HPE executives throughout the week here in London.

Up until Thursday, the best responses we’d received to these questions were that orchestration support would be a feature coming down the road. At one point, Cosgrave outlined a point in his company’s evolutionary roadmap called “Transformation Phase III” — a point that, at least so far, lacks a fixed timeframe.

“The next step, Phase III, will look at further integration of the stack,” the chief strategist stated, “to look at the native cloud environment, with integrating more automation, analytics, and cloud-based capabilities.”

Then came Thursday afternoon when, during a demonstration of HPE Synergy for The New Stack, two of the composable infrastructure project’s leading engineers on the containerization side told us that they explicitly designed their system to work transparently in the background. This way, they asserted, orchestration systems such as Kubernetes could continue to manage the operation and performance of multiple container-based workloads, including microservices, without actually knowing that any kind of composable infrastructure is taking place.

In other words, that road to composable bare-metal container provisioning is shorter than even HPE’s executives said it was. 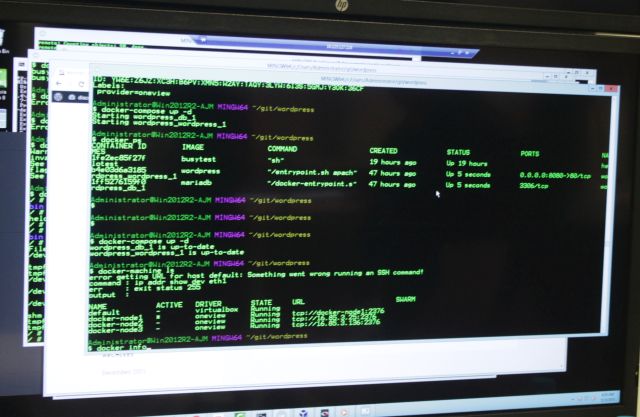 Quintero showed us that the same commands being passed to Docker Machine and Docker Compose to spin up a new instance of a container will also trigger a template created for OneView (HPE’s traditional server management system) to provision exactly the machine it’s looking for, from a stream of resources that was referred to here by a number of similar-sounding terms, one of them being the image streamer. 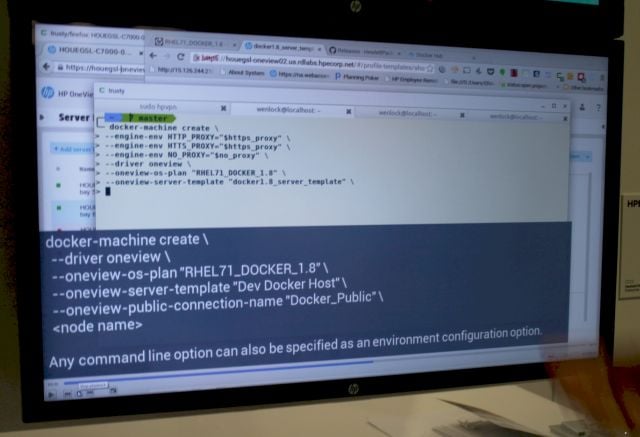 This architecture, Quintero showed us, will enable Docker users to continue using Docker Machine, Docker Swarm, and their other tools exactly the same way they’ve always done, with no adjustments. A template for OneView will respond to container creation calls by provisioning segments of compute, storage, and networking resources that are custom-tailored to fit containers.

Quintero informed us he was the lead designer of a Docker plug-in, having consulted with Docker Inc. in the process. This plug-in, he said, makes it possible for any container provisioning system that follows the rules to effectively requisition physical resources at will for containers. While Cosgrave and others here at Discover referred to “a single line of code” — namely, the API command that calls OneView and requisitions resources — it is the OneView template that contacts Quintero’s Docker plug-in, he told us, that actually utilizes this command.

So not even a single line of code adjusts, interrupts, or otherwise mutilates whatever container provisioning scheme is already in place.

An administrator would still need to use the OneView console to set up the Docker host in advance. But then, in a live demonstration using a real Synergy server, Quintero showed us that the OneView template passes the commands from Docker Compose directly to the plug-in. 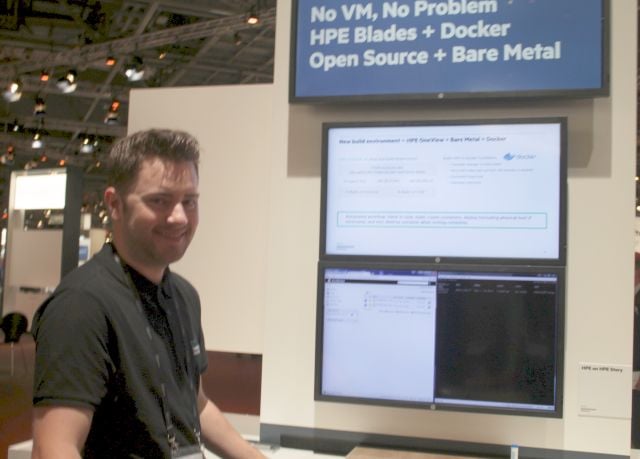 Putting to rest a serious concern about how ContainerOS — HPE’s forthcoming minimalized Linux kernel, announced here Wednesday ­­– would impact the format and content of containers, HPE Senior Software Architect Adam Diel told The New Stack that the composable infrastructure platform is absolutely not a hypervisor-driven virtualization environment with containers wrapped to look like VMs — a scheme adopted by VMware vSphere Integrated Containers and by Intel Clear Containers. And Diel confirmed Quintero’s statement that orchestrators could continue to behave as they always have, by virtue of the fact that orchestrators are divorced from the hardware layer anyway by the existing layer of abstraction between all hardware and software.

It’s an extremely desirable virtue — the capability for a new, real machine to be instantaneously created, to meet the requirements of any particular class of workload. And yet the virtue itself is so new, and the space it would benefit so unexplored by conventional data center architects, that the executives who lead the first company to bring it forth may not yet themselves actually understand what their engineers are saying it is.