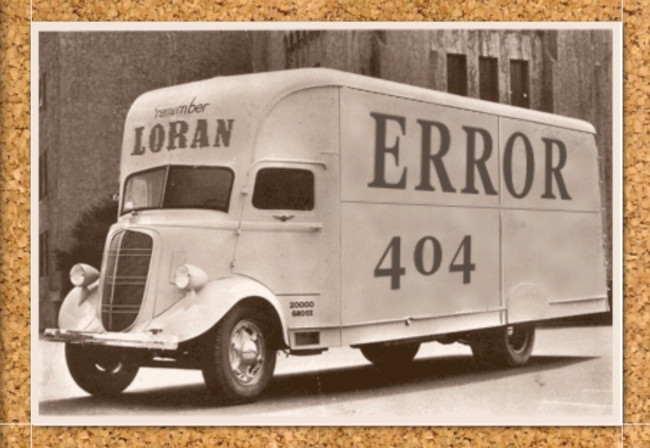 The humble response sent by a web server when the requested page isn’t found, the HTTP 404 Not Found Error has long served as a base for webmasters to send web browsers homegrown funny messages.

For example, go to any non-existent page at IpSwitch.com, you’re greeted with an arresting image of a fire burning in front of hapless technical support worker Moss from the British geek sitcom “The IT Crowd.”

And what do NASA servers do when they don’t have your requested web page? They display a beautiful starry image from deep in the milky way, advising you that “The cosmic object you are looking for has disappeared beyond the event horizon.”

Maybe this is where geek culture really lives — in the hidden messages left behind by webmasters who were hoping they’d never need to be read. Silicon Valley dev Hank Shiffman decided to try being poetic: “The horror of it all! To lose our way amid the chaos of false paths, broken lanes and desolate byways that is the net! Is there no hope? Can we find no beacon in the gloom to point us back toward civilization?”

And Slack just shows a truly excellent illustration of an idyllic countryside — with blue butterflies, a chicken and a pig, meandering past flowers, trees, and a light blue mountain sky — as they mildly explain that “There’s been a glitch…”

“We’re not quite sure what went wrong. You can go back, or try looking on our Help Center if you need a hand.”

What I like about this one is its attention to subtle details. The viewport scrolls in a different direction if you move your mouse. And if you change focus to the URL bar (or alt-tab away), the colors become black and white…

One of the most elaborate 404 messages of all time involved dozens of text strings in a JavaScript which spewed out, line-by-line, as a monologue supposedly delivered by a despondent web server.

I’m really depressed about this…
I mean, I don’t even know you.
How should I know what you wanted from me…?

And where do you get off telling me what to show anyway?
Just because I’m a web server
and possibly a manic depressive one at that?
Why does that give you the right to tell me what to do?
Huh? I’m so depressed…
I think I’ll crawl off into the trash can and decompose
I mean, I’m gonna be obsolete in what, two weeks anyway?
What kind of a life is that…? and then I’ll be replaced by a .01 release
that thinks it’s God’s gift to web servers
just because it doesn’t have some tiddly little
security hole with its HTTP POST implementation
or something

Another version of that message turns up on the German t-shirt site CamoDesign.de — this time delivered by a surreal illustration of a frowning green cyber creature.

And 17 years ago some web sites began implementing an even stranger monologue. It looks like a typical error message, until you realize it’s laced with tons of profanity and some surprisingly personal abuse.

You tell your friends you’ve been online since ’94, but Mr. “I’ve been on the net since Al Gore invented it” seems to call me a lot at 2 am in the morning and asking what settings you need to put in your outlook express to get your @home email, or “how do I send something in icq and instant messanger[sic]...?” No, I’m not your personal Microsoft hotline, and when I go to your place for dinner, please don’t ask me if I could “Just take a look at something” you’ve been having trouble with…

But many sites pour their creative energies into something more visual…

And YouTube used to tell you that “A team of highly trained monkeys has been dispatched to deal with this situation.” But now they just show a monkey with a magnifying glass over a search field, with an apology and a suggestion to “Try searching for something else.”

In fact, some 404 error messages inadvertently become poignant reminders of how much things have changed. There will always be a special place in my heart for that 2003 error message cartoon from the Flash site Homestar Runner. It looked like a standard Internet Explorer warning that “The page cannot be displayed” — until the cartoon character walked onto the page, casting a bemused look for its jumble of errors, and murmured “Ummm…” before asking out loud, “What’s going on here?”

He’s greeted by the cartoon’s Mexican wrestler character StrongBad, who explains matter-of-factly that “The system is down, yo” — beginning 68 seconds of surreal dialogue.

Open The System is Down – Homestar Runner on YouTube.

But now that video’s original URL actually is dead, and like much of the site itself, appears to have migrated to YouTube.

And that’s not the only casualty…

Funny 404 error pages are a tradition that’s lasted pretty much since the birth of the web — but recently I discovered that many of their clever messages are now lost themselves. I’d been saving them in a file over the years, only to discover that many of my favorite “page not found” messages can, in fact, no longer be found. And they’re also hard to locate on Archive.org — because why would they be archiving the placeholder pages for pages that didn’t exist?

For nearly 20 years there’s been at 404lounge.net. Registered in 2001, it once hosted hundreds and hundreds of ’em, but it’s apparently long-since been abandoned. The last entry on its “News” page is from 2006. Like a floating relic, it still helpfully features a page with tutorial links, plus a page with links to four other 404-collecting sites — all dating from the early 2000s. Yet the last site isn’t even there any more — ironically becoming a site about 404 pages that’s been replaced by a 404 page. 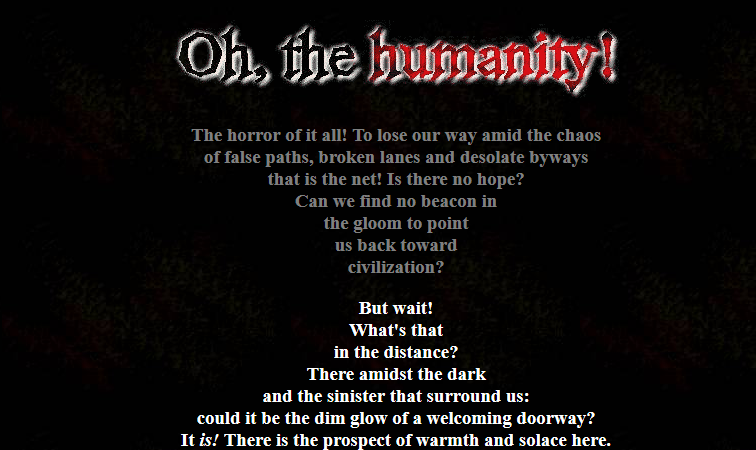 And the first one (at 404Lab.com) doesn’t even give you that. It simply leads to an entirely blank home page.

But fortunately, the third site is paydirt — an old collection of 404 error messages that thought to take screenshots of each one, preserving their creativity forever.

And the second site (hosted at SendCoffee.com) playfully messes with your head, with a warning message that says “404 Not Found — wait, yes it is….”

“The requested object does exist on this server. The link you followed is neither outdated nor inaccurate, and the server has been instructed to let you have it. Please bow in awe and offer sacrifices to the site administrator of the referring page…..”

And yes, they do still have a really cool (and functioning) 404 error page.

In fact, SendCoffee claims to have created the internet’s very first 404 appreciation site back in 1996, “to showcase those who put some effort into making the 404 more than an annoyance.” It was even declared one of the internet’s “hot sites” — in the weekend edition of USA Today on May 15, 1998.

More than two decades later, it’s still online, and still sharing its links to the 404 error messages of yesteryear. But again, nearly every one of them is now just a plain old, ordinary dead link instead.

It’s hard to reckon up exactly what’s been lost. It was like a secret second web, existing only in that strange netherworld that lay just beyond our intentions — and that only appeared when we were lost. Like the Piper at the Gates of Dawn, it greeted us before we fell off the edge of the web, and then always led us safely home, a spontaneous moment of kindness from internet strangers, an underground hello from the geeks who run the web…

But in that sense, can it ever really be gone? Maybe the “404 web” is just the sum total of all the creativity of those still-unseen webmasters.

And they’re all still huddling out there somewhere in the vast darkness of the web, still waiting to give us a friendly, hammy hello the next time we’re lost.