Observability: Hubble Spots the Most Distant Star Ever Seen

The team's discovery was based on data collected during Hubble’s RELICS (Reionization Lensing Cluster Survey) program, which is led by paper co-author Dan Coe from Baltimore's Space Telescope Science Institute (STScI). Using this data, the team estimates that Earendel is at least 50 times the mass of our Sun, and likely shines millions of times as bright.
May 29th, 2022 1:00am by Kimberley Mok 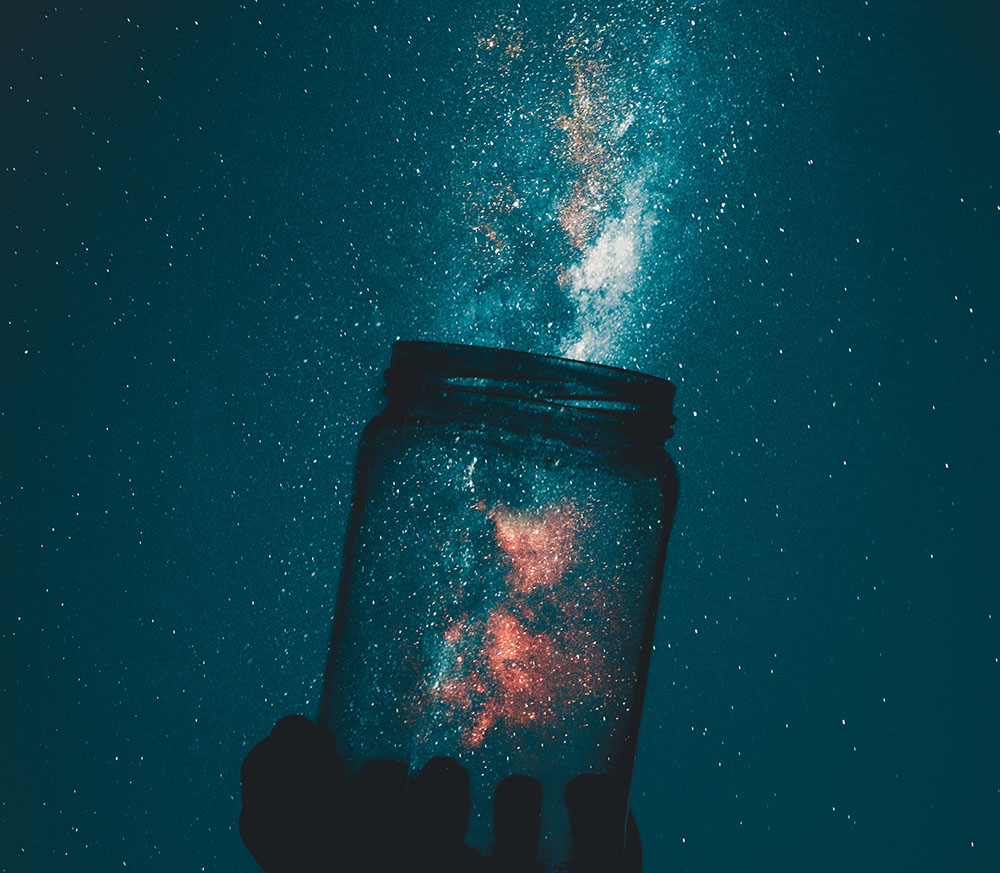 Since its launch over three decades ago, the Hubble space telescope has served as humanity’s eyes out into the universe, allowing us to see deeper into the vast stretches of a star-studded universe beyond our planet.

This giant space telescope floating above our atmosphere has accomplished many firsts, and recently broke another record when a team from Johns Hopkins University and the Space Telescope Science Institute (STScI) used Hubble to spot the most distant star detected thus far, located about 12.9 billion light-years away.

In a paper published in Nature, the research team describes how they were able to observe the star officially known as WHL0137-LS, now also nicknamed “Earendel,” meaning “morning star” or “rising light” in Old English.

According to the team’s findings, Earendel was already emitting light during the universe’s first billion years, meaning that the light from it that we now see appears as it did when the universe was only 7% of its current age, or at the metric astronomers call “redshift 6.2.”

Redshifting occurs because as the universe progressively expands, light from faraway objects that are moving away from us shifts and literally stretches to reveal the longer and redder wavelengths of light as it travel toward us. Scientists study redshift to determine how an object in space is moving, relative to our position.

This new discovery surpasses Hubble’s previous 2018 record in observing the most distant star at 9 billion light-years away.

The space telescope had help with both discoveries in the form of a natural phenomenon called gravitational lensing, where a large amount of matter — such as a cluster of galaxies — creates a gravitational field that is so strong that it bends and amplifies the light coming from distant sources behind it, so that it can be detected as it travels toward the observer.

The effect of gravitational lensing is similar to that of looking through a big magnifying glass — but through outer space — and allows scientists to see farther than would be otherwise possible with our current technology.

As astronomer and paper’s lead author Brian Welch of Johns Hopkins University explained in a press release, the findings were a lucky happening, as the team was initially focused on studying the gravitational lensing effects of another space object known as the Sunrise Arc.

“We almost didn’t believe it at first, it was so much farther than the previous most-distant, highest redshift star,” said Welch. “Normally at these distances, entire galaxies look like small smudges, with the light from millions of stars blending together. The galaxy hosting this star has been magnified and distorted by gravitational lensing into a long crescent that we named the Sunrise Arc.” 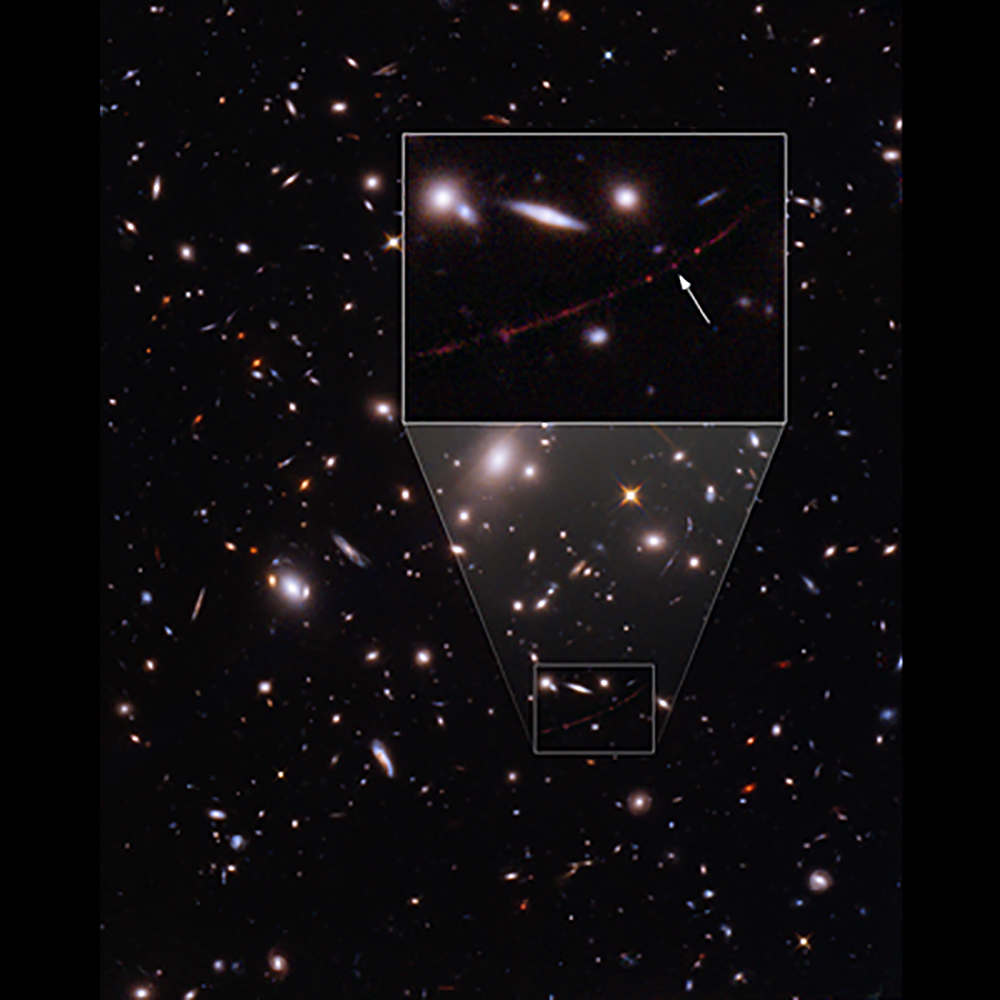 Arrow indicates location of Earendel, amid the red crescent of the Sunrise Arc.

The team’s discovery was based on data collected during Hubble’s RELICS (Reionization Lensing Cluster Survey) program, which is led by paper co-author Dan Coe from Baltimore’s STScI. Using this data, the team estimates that Earendel is at least 50 times the mass of our Sun, and likely shines millions of times as bright.

But the team points out that even such a massive, brilliantly shining star is impossible to see at such long distances without some kind of help, such as the boost provided by gravitational lensing.

“Previous lensed star discoveries were identified when the magnification, and thus observed brightness, temporarily increased,” said the team. “These transients have relied on microlensing, wherein stars bound to the lensing cluster temporarily align with the lensed image(s) of the star, creating a brief boost to the magnification.”

In this case, the researchers were able to spot Earendel due to its serendipitous alignment with a ripple in the fabric of space in the host galaxy cluster providing the gravitational lensing effect. This ripple, which is called a “caustic,” helps to highly optimize the impacts of magnification and brightening, thus making Earendel a thousand times even more bright.

But sighting this far-off star is only the first step. Now, the team is working to determine what kind of star Earendel is, and they are speculating that it may be either an individual star, or a binary star that is paired with at least one smaller stellar object.

The team hopes to confirm these details, along with Earendel’s temperature, brightness and stage in the stellar lifecycle, with the help of NASA’s James Webb Space Telescope, which was recently launched in 2021. The team believes that Earendel will likely be a massive star that is lacking in the heavy elements that typically form in younger stars. Even more exciting is the possibility that Earendel may be one of those rare “Population III” stars that were formed right after the Big Bang.

“Earendel existed so long ago that it may not have had all the same raw materials as the stars around us today,” said Welch. “Studying Earendel will be a window into an era of the universe that we are unfamiliar with, but that led to everything we do know. It’s like we’ve been reading a really interesting book, but we started with the second chapter, and now we will have a chance to see how it all got started.”

SHARE THIS STORY
RELATED STORIES
Enterprise Kubernetes Lessons Learned from MoneyGram and HP New Research Shows the Future Is Bright for Edge Kubernetes Sternum Adds Observability to the Internet of Things Google Puts Open Source in Chip Design and Manufacturing US Chokes off AI Software Access to China
SHARE THIS STORY
RELATED STORIES
Google Puts Open Source in Chip Design and Manufacturing What Is Supply Chain Security and How Does It Work? A Way to Replicate Data at the Edge ARM Server Chips Get a Boost with Ampere’s Altra Microsoft Takes Kubernetes to the Edge with AKS Lite
THE NEW STACK UPDATE A newsletter digest of the week’s most important stories & analyses.
The New stack does not sell your information or share it with unaffiliated third parties. By continuing, you agree to our Terms of Use and Privacy Policy.