HuggieBot Is a Robot Learning How to Hug Humans 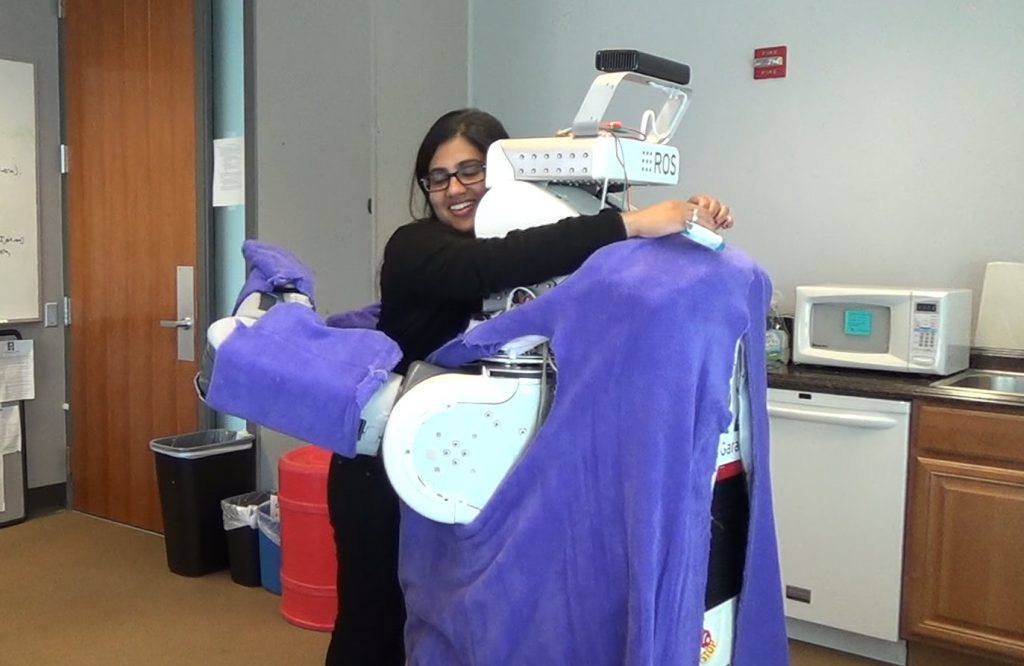 Need a hug? Well, in the near future, it might be a robot that’s offering that feel-good embrace. After all, robots are slowly but surely making inroads into many areas of our daily lives: they are collaborating with us in the office, flipping burgers, and passing medical licensing exams in order to assist nurses and doctors. So why not a robot specifically programmed for hugging?

One might be initially put off by the idea of a cold, metal machine delivering those hugs, but that’s the inspiration behind HuggieBot, a project being spearheaded by researchers over at the Max Planck Institute for Intelligent Systems in Stuttgart, Germany. The idea here was to develop a robotic system that could safely and reliably provide emotional support to humans through on-demand hugs, without any of the potential awkwardness or weirdness that one might feel in a human-to-human hug. After all, depending on one’s temperament, sometimes one might be self-conscious about asking for a hug from another person, or one might be uncomfortable with a hug that goes on just a tad too long for one’s personal comfort level. Having a robot that can customize hugs and respond to these individual preferences may be the one way around this dilemma. See HuggieBot in action:

As the team points out in their paper, there’s a good reason to automate hugs. Recent research experiments have linked hugs to improved immunity, reduced stress and engendering a greater sense of well-being. The theory goes is that warm, fuzzy embraces will stimulate our body’s production of oxytocin (the so-called “feel good” hormone), which promotes a relaxed state, due to a decrease in the heart rate and a drop in the stress hormones like cortisol and norepinephrine. Working with this knowledge, the team wanted to create a hugging robot that could offer these health benefits by quantifying what distinguishes a ‘good’ hug from a ‘bad’ one.

Surprisingly, the team found that it’s actually a lot harder to create the perfect hug than one might initially think. Using a modified PR2 robot, the researchers went through a variety of experiments with 30 participants to quantify a range of hug-related parameters. For instance, the team found that the positioning and pressure exerted by the robot’s arms is important in order to ensure comfort and eliminate unnecessary over-compression.

Not surprisingly, the majority of test subjects also preferred when the HuggieBot’s hard body was softened with heated layers of foam, cotton, and polyester, allowing it to give warmer and softer hugs. As the researchers also discovered, the duration of the hug is critical: human participants disliked short, one-second hugs, and preferred slightly longer, tighter hugs, but expect a hug to terminate when they begin to disengage from the robot — a motion that is detected via a pressure sensor located on the back of the robot’s neck.

Perhaps the most intriguing finding is how people’s view of the robot changed after they hugged one: “Participating in this experiment significantly increased positive user opinions about robots and robot use,” wrote the researchers. “Comparing responses to the same 15-question survey given both before and after the experiment, we found that users felt understood by, trusted, and liked the presence of the robot significantly more after the experiment. The results also show that people found robots to be nicer to hug, easier to use, and more of a social agent than they initially anticipated, after our experiment.”

As the team outlines in IEEE Spectrum, the aim now is to further develop the HuggieBot to incorporate haptic intelligence, so that it can glean more touch-based information from sensors. The researchers also hope to build a slimmer version of their hugging bot, with a screen for the face, so that a live image of a faraway friend or family member could be displayed, to create a personalized hug. In addition, AI for detecting emotional cues on people’s face could also be mixed in, in order to increase the robot’s ability to respond and adapt accordingly to someone’s mood in the present moment.