Clippy shimmered back into view last month, a forgotten ghost from the 1990s. As one of Microsoft's earliest virtual assistants — and one of its most spectacular failures — the animated talking paperclip lives on in the memories of Twitter users (especially Microsoft employees). But Clippy's life offers some interesting insights into how we humans interact with our technology.
Mar 3rd, 2019 6:00am by David Cassel 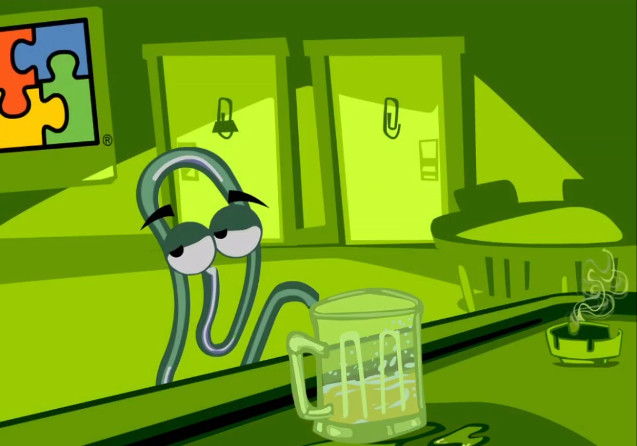 Clippy shimmered back into view last month, a forgotten ghost from the 1990s. As one of Microsoft’s earliest virtual assistants — and one of its most spectacular failures — the animated talking paperclip lives on in the memories of Twitter users (especially Microsoft employees). But Clippy’s life offers some interesting insights into how we humans interact with our technology.

Over the years, many tech thinkers have weighed in on what exactly it was that made Clippy so phenomenally unpopular.

“Worst Inventions of All Time”

Back in 1995, Microsoft had wanted to build an even-easier alternative interface for Windows, a special virtual environment with homey accouterments, like a desk or a helpful dog, that each launched corresponding applications.

“The question for Microsoft was how to make a computing product easier to use and fun,” wrote Byron Reeves, one of two Stanford University communications professors who had worked on the project as consultants. “We said that people are good at having social relations — talking with each other and interpreting cues such as facial expressions. They are also good at dealing with a natural environment such as the movement of objects and people in rooms, so if an interface can interact with the user to take advantage of these human talents, then you might not need a manual.”

Unfortunately, this wasn’t the breakthrough they’d hoped it would be. Clippy was spun out from Microsoft Bob, an overlay that attempted to provide assistance for every aspect of Windows 95. “Imagine a whole operating system designed around Clippy, and you get the crux of Microsoft Bob,” Time magazine once wrote. The infamously unpopular interface lasted less than a year — Time called it one of the 50 worst inventions of all time. Bob even lead to the creation of the font Comic Sans, which is often criticized for its own lack of seriousness. But undaunted, in the fall of 1996 Microsoft introduced their first versions of “Office 97” which included the first animated virtual assistants — including Bob’s leftover animated talking paper clip.

“Office Assistant was famously named TFC during development,” former Microsoft executive Steven Sinofsky wrote in 2005, adding “The ‘C’ stood for clown. I will let your active imagination figure out what the TF stood for.”

After the Focus Groups

Clippy had been one of nearly 250 different characters designed for Bob. “Through working with some social psychologists out of Stanford, we spent six months going through them all, whittling them down with focus groups and stuff like that,” Clippy designer Kevan Atteberry told Vice in 2017, “and [Clippy] came out to be the number one most trustful and engaging and endearing character of them all.” So though there were at least eight other virtual assistants available, “he became the default.”

“Most of the women thought the characters were too male and that they were leering at them.” — Roz Ho, a vice president at Ericsson

Ironically, Atteberry tells Vice, Clippy was designed on a Mac.

But even then the idea wasn’t unanimously supported, according to Roz Ho, a vice president at Ericsson who had previously been a Microsoft executive, eventually leading its Mac business unit. in the 2015 documentary “Code: Debugging the Gender Gap,” she says there were already hints of a negative reaction toward Clippy and the other virtual assistants after “a bunch of focus-group testing…

“Most of the women thought the characters were too male and that they were leering at them.”

In the end, this feedback was ignored — she was the only woman in the group and says that the male engineers had responded, “I don’t see it,” according to an article in The New Yorker. But this summer Atteberry argued that the problem wasn’t in his artwork. “The reason he wasn’t liked was the functionality; what the programmers had him do. I’ll take all the credit for the good stuff,” he told MyNorthwest.

Stanford University communications professor Clifford Nass, who had also consulted on Clippy, later acknowledged the issue. After watching ventriloquist Shari Lewis testify to Congress using her hand puppet Lamb Chop, Nass began re-examining the behavior of Clippy, and decided there was one word for it: abysmal.

“He is utterly clueless and oblivious to the appropriate ways to treat people,” he told Gizmodo. Clippy repeated the same unhelpful information, over and over again, without ever even beginning to evolve in response to user behavior. “Indeed, Clippy made it clear that he was not at all interested in getting to know them.”

Or, as Nass told another interviewer at RGB Filter, “We found what he did somehow angered and infuriated people with a vehemence that is usually reserved for people like Stalin or someone like that.”

Even Clippy’s illustrator told Vice that he totally understand the annoyance factor — although “I didn’t really experience it myself, because I’m a Mac guy.”

Alan Cooper, the creator of Visual Basic once argued that Clippy was a “tragic misinterpretation” of some good research. The two Stanford professors had concluded that people view interactions with computers the same way they view interactions with people — but apparently, that doesn’t mean we needed to add human faces. “If people are going to react to computers as though they’re humans, the one thing you don’t have to do is anthropomorphize them. Because they’re already using that part of the brain.”

Was there a way to salvage the situation? Back in 2001, Microsoft tried using that hatred to promote newer versions of Office. On a Microsoft.com web page, Clippy told visitors that “Office XP works so easily that it’s made Office Assistants like me useless. Obsolete. And, I’m told, hideously unattractive.”

Clippy also shared a new song that he’d written — “It Looks Like You’re Writing a Letter.”

For the campaign, Microsoft also released a series of online cartoons where the voice of Clippy was provided by Gilbert Gottfried. At one point he asks if “XP” stands for “ex-paperclip”?

At Microsoft’s request, Clifford Nass did actually devise one successful strategy that made people like Clippy more: Clippy teamed up with frustrated users to write angry emails to Microsoft, according to Gizmodo. “We showed this system to twenty-five computer users, and the results were unanimous: people fell in love with the new Clippy!”

Unfortunately, there was one crucial group which didn’t like his suggestion: Microsoft. “While impressed with our ability to make Clippy lovable, the company did not pursue our approach,” Nass wrote in a 2010 book, remembering that it was the beginning of the end. “When Microsoft retired Clippy in 2007, it invited people to shoot staples at him before his final burial.”

Last month in an interview with Business Insider, former Microsoft executive Steven Sinofsky remembered that eventually the company even held an official retirement party for Clippy in San Francisco — after which one photographer spotted the unemployed paperclip panhandling for spare change, according to Business Insider.

But his infamy lives on. On the 10th anniversary of Clippy’s death, writer Jame Fallows applauded in Atlantic Monthly a prank program that installed a Clippy look-alike that would pop up even more frequently on the victim’s computer, and with even less appropriate interruptions — like “Your computer seems to be turned on.”

And in 2015 a Saturday Night Live skit imagined an even more annoying Microsoft virtual assistant — named Pushy the push pin.

But is Clippy enjoying a secret afterlife? “People tell me when you’re on the Microsoft campus, Clippy t-shirts are still one of the hot sellers in their stores,” Atteberry tells Vice.

And Clippy’s also been spotted giving a greeting to at least one new Microsoft employee.

Look who I found 📎 pic.twitter.com/1viJNrBmG0

And Atteberry? He’s since illustrated several children’s picture books — but don’t ask him if he’s getting any Clippy-related royalties. “Man oh man, I wish I did. A penny for every computer that’s on, I’d be set for life. No. I was paid nicely and fairly at the time… They pay you a fair enough fee for it.”

But when he looks back on the phenomenon that was Clippy, he adds “to be honest, not everybody hates him. I get a dozen pieces of fan mail from people that just loved Clippy. ”

Inspired by the Big Mouth Billy Bass, I built a @LEGO #Clippy #robot using @Azure Huge thanks to @geekpatrol and Bricks and Minifigs, Plano pic.twitter.com/Fay08GUs4I

And one fan is Chloe Condon, a Microsoft cloud developer advocate, who used a Clippy motif for her new business cards, which generated a lot of interest on the internet.

Last week after tweeting a picture of the cards, she received over 6,000 “likes.” Nancy Baym, a principal researcher at Microsoft Research, posted that she was currently writing a paper about Clippy-related memes, and apparently once even dressed up as the paperclip avatar.

😘 Love the card. Here’s a picture of me in the Microsoft archives pic.twitter.com/q2AnU5jTBP

Sinofsky tweeted, “I suppose if you live long enough, others will wear your failures as a badge of honor.”

SHARE THIS STORY
RELATED STORIES
Building an Internal Developer Platform Isn't Just about Tools Slack: How Smart Companies Make the Most of Their Internships Collaborating with Internal Dev Experience and Tool Teams SANS Survey Shows DevSecOps Is Shifting Left  What’s the Future of Feature Management?
SHARE THIS STORY
RELATED STORIES
Entrepreneurship for Engineers: Painkiller or Vitamin?  Fear and Layoffs: How to Cope with Tech’s Uncertain Times Low-Code Tools Improve Devs' Work-Life Balance, Survey Finds Collaborating with Internal Dev Experience and Tool Teams New Book Identifies 26 Lines of Code that Changed the World
THE NEW STACK UPDATE A newsletter digest of the week’s most important stories & analyses.
The New stack does not sell your information or share it with unaffiliated third parties. By continuing, you agree to our Terms of Use and Privacy Policy.