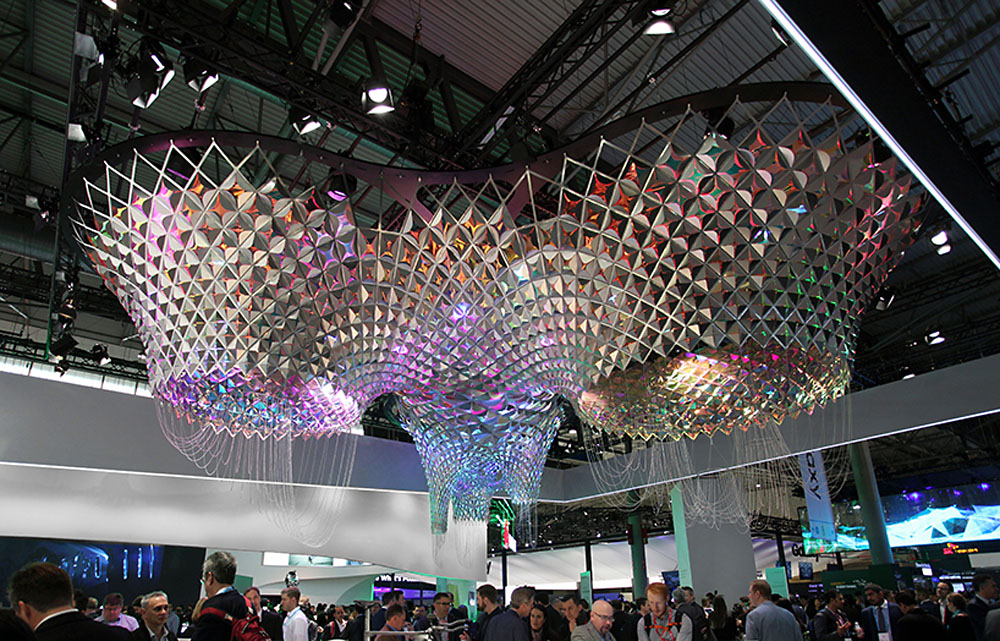 It seems that everywhere you turn nowadays, you hear about how artificial intelligence is breaking into one area or another that was once thought to be the hallowed preserve of humans. From developing artificial imagination, dreaming, to deep neural reasoning, these technologies are helping machines do what was previously thought impossible, such as composing music, writing novels, besting humans at various games, and navigating and learning about complex systems on their own. There’s immense potential for AI to aid and assist humans in all kinds of endeavors — might AI also help designers and architects build cities and other inhabitable environments of the future?

This is something that is quite entirely possible, as this large-scale interactive installation — created by design studio SOFTlab with the help of IBM’s AI platform Watson — is suggesting. Built for this year’s Mobile World Congress in Barcelona, the structure was designed, fabricated and assembled using digital and computational tools, which in itself is not that unique. However, what is unique about this project is that artificial intelligence was used to augment the design process, “informing” the style of the form, using Barcelona’s most famous architect, Antonio Gaudí, as the inspiration.

Gaudí, who was active during the end of the nineteenth century, was well-known for conceiving expressive, organic forms that are still being studied today. To help SOFTlab create the distinctive 13-foot tall sculpture with Gaudí’s touch, Watson was fed volumes of data on the history behind Gaudí’s life and works, as well as the architecture, art, literature and music of Barcelona.

This kind of wide-ranging research is something that designers and architects will typically do during any design process, albeit probably in a smaller scope and likely at a slower pace. By incorporating AI into the conceptual stage of the design process, and getting it to digest all these disparate bits of information, the design team was able to glean valuable and unexpected insights — such as Gaudí’s favored color palettes, and making surprising observations revealing the role that crabs, shells and spiders may have played as part of Gaudí’s unique style. 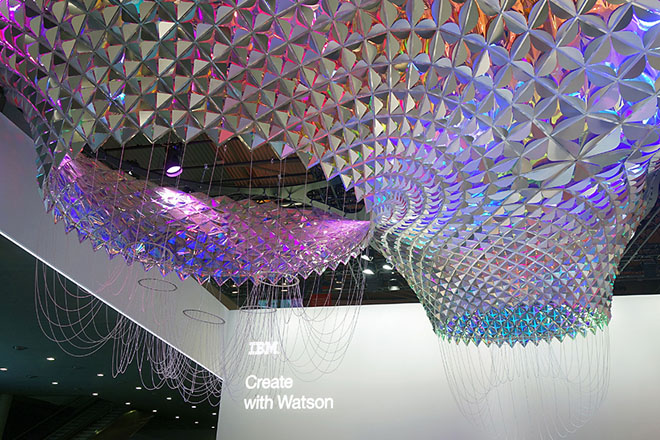 Watson’s AlchemyLanguage technology — a collection of APIs that offer text analysis through natural language processing — was used to detect patterns that wouldn’t have been immediately apparently to humans from this massive amount of data.

“With this, Watson was able to become a Gaudí expert that could help us understand a century of inspiration in order to re-inspire our design process,” writes SOFTlab’s founder, Michael Szivos.

IBM’s AI also helped the design team make critical design decisions, like determining what kinds of materials to use that would be most representative of Gaudí’s body of work. Though it isn’t apparent in this modern iteration, Gaudí often relied on materials like colorful ceramics, tiles, glass and wrought iron, the echo of which can be seen in SOFTlab’s scaly, shell-like installation, which utilized an aluminum structural framework. 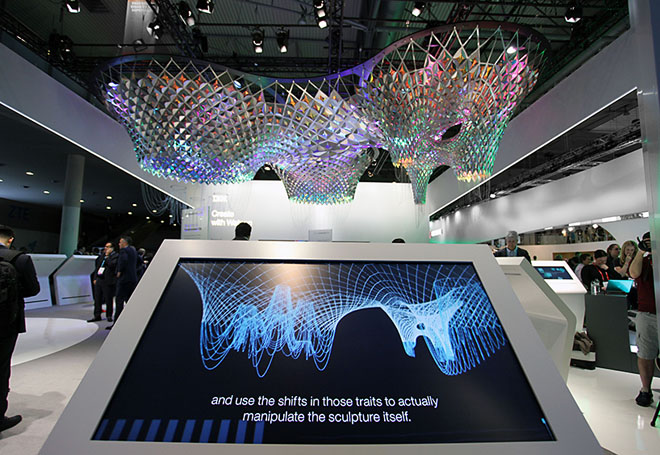 Beyond form, Watson also added an element of interactivity to the installation by analyzing the emotional tone of related tweets made on social media, prompting its makers to call it a “thinking sculpture.” Watson’s Tone Analyzer used linguistic analysis to interpret communication tones in these bits of written content, automatically triggering chain tendrils, attached to the sculpture’s lower rims, to move in response.

This particular component is a clear reference to Gaudí’s preference for scale models (instead of drawings) in developing his designs. Interestingly, many of Gaudí’s scale models were outfitted with chains or weighted strings, which allowed him to explore the physics inherent behind the play of forms. This linking of real-time data analysis with the installation itself provides a ‘big picture’ vision of the work and its larger context. 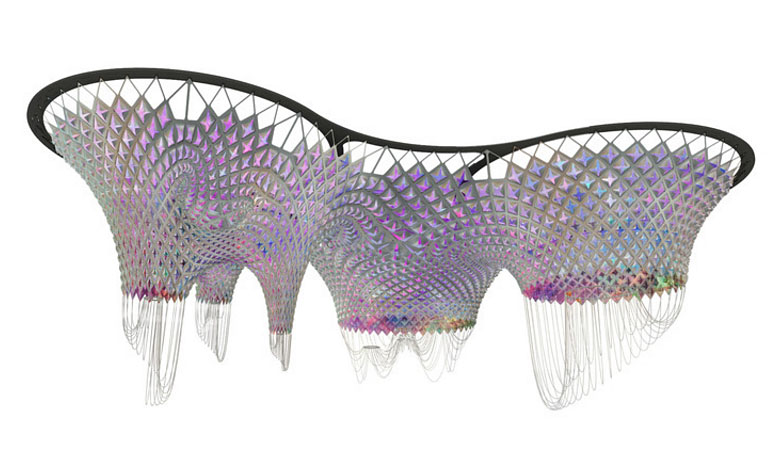 “[The chains] are activated by real-time data analysis provided by Watson about various topics related to Barcelona, technology, and the Mobile World Congress,” said the team. “Each chain model represented the sentiment Watson gathered by querying social media channels. The chain model was accompanied by a live interface that showed the installation upside down, much like Gaudi’s gravity-driven models. The installation itself acted as a spatial representation of the changing data, while the interface used the upside-down 3D model of the installation as a graph to show more precise metrics and the social media that were driving them.” 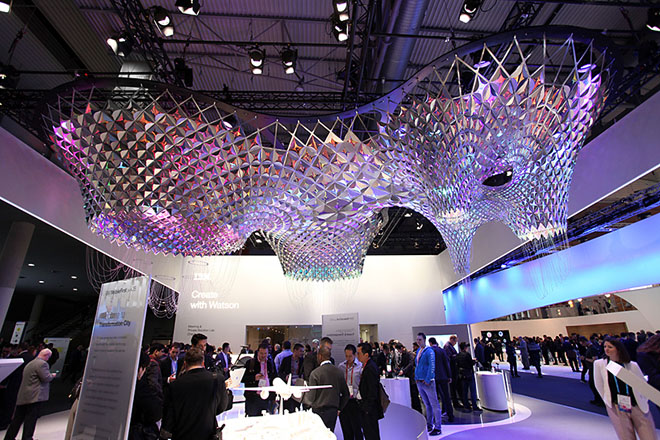 By incorporating the vast capabilities of AI to dig deep into data and bring new insights to the surface, whether it’s in architectural details or the tone woven into someone’s words, this sculpture is able to come alive and express the spirit of the moment.

Similarly, one can imagine that cities and their buildings might someday utilize artificial intelligence in a way that allows them to automatically adapt to changing conditions. It’s an encouraging instance of how powerful AI can be in many industries: here, we see an example of AI not replacing humans in the design process, rather extending and augmenting the creativity that’s already there.

SHARE THIS STORY
RELATED STORIES
Six Signs You’ve Got an API Sprawl Problem The Dos and Don‘ts of API Monetization What TNS Readers Want in 2023: More DevOps, API Coverage Crossplane: A Package-Based Approach to Platform Building Planning User Roles for Your Application
TNS owner Insight Partners is an investor in: Real.
SHARE THIS STORY
RELATED STORIES
Improve the Quality of Your APIs with Spectral Linting 5 Ways to Improve Your Web Application and API Security The Flywheel Effect of Kubernetes APIs Platform Engineering in 2023: Dev First, Collaboration and APIs State of the API: Monetizing API Deployment Is on the Rise
THE NEW STACK UPDATE A newsletter digest of the week’s most important stories & analyses.
The New stack does not sell your information or share it with unaffiliated third parties. By continuing, you agree to our Terms of Use and Privacy Policy.