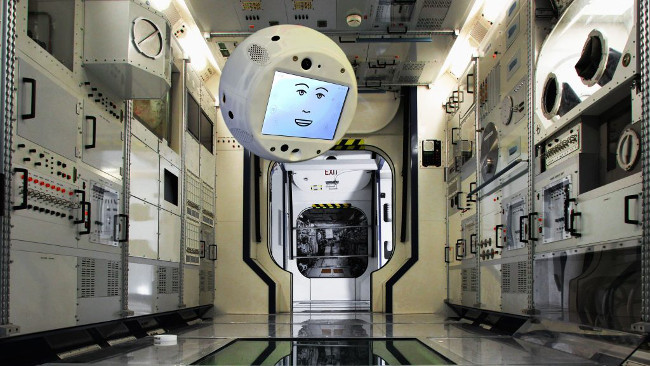 A dedicated team is extending IBM’s cloud-based technology to outer space, and bringing us one step closer to a science fiction future where intelligent talking helper robots collaborate with astronauts.

At the end of June, a SpaceX rocket carried an autonomous AI device to the six astronauts onboard the International Space Station. The historic launch carried 5,900 pounds of cargo which reportedly included a delivery of ice cream — plus some fresh blueberries and some “super-caffeinated coffee.”

And 11 pounds of that was a talking robot, roughly one foot in diameter.

All of its plastic and metal was generated by 3D printers. “He started out as a round sphere of plastic,” reads Entry One in IBM’s project journal — noting that originally the engineers just called him “spaceball.” But eventually they chose the name CIMON — which stands for “Crew Interactive Mobile Companion.” The AI will be assisting 42-year-old astronaut Alexander Gerst, who even helped pick out its animated face and voice.

“Astronauts don’t have a lot of company in space, nor do they have a lot of help while they’re working up there,” explained some IBM explanatory material. So CIMON will read out step-by-step instructions, which the astronauts currently have to read off the screen of a laptop. This inspired Reuters to describe CIMON as “a responsive, hands-free companion.” 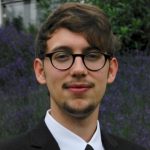 “Experiments sometimes consist of more than 100 different steps,” explained IBM engineer Matthias Biniok, one of CIMON’s lead architects, on IBM’s Think blog. “CIMON knows them all.” The blog post argues that this brings the astronauts into “a genuine dialogue” with their new interactive assistant.

“The developers responsible for CIMON predict that this will help reduce astronauts’ stress and at the same time improve efficiency.”

The Best and the Brightest

CIMON is the result of the efforts of a 50-person team from Airbus, DLR, IBM and the Ludwig-Maximilians-Universität Munich, all overseen by Space Administration at the German Aerospace Center.

Besides learning all that astronaut jargon, CIMON also had to have a way to locate where the human voices were coming from. “It’s noisy up there,” points out CIMON’s project journal. IBM also reports that part of the training involved learning Gerst’s favorite songs. But recognizing each astronaut’s unique face would’ve required a complicated (and distinct) procedure, so instead the team came up with a clever workaround. Using “massive” stacks of images, they settled for an easier goal. “They trained the program to recognize ‘Gerst’ and ‘not-Gerst.'”

“For now, the only human in the world that CIMON can identify is Alexander Gerst — and provided no one gets jealous at zero gravity, that’s pretty cute.”

CIMON is tapping into IBM’s Watson technology, explains Airbus, adding that CIMON is designed to not only help the human astronauts but to also create “a feeling of talking to a crewmate.” CIMON recognizes emotional cues like excitement or unhappiness. Training data included phrases and sentences with emotional cues — happy, sad, excited, lonely — equipping CIMON to appropriately respond not just with information, but also with suggestions and even emotional support. 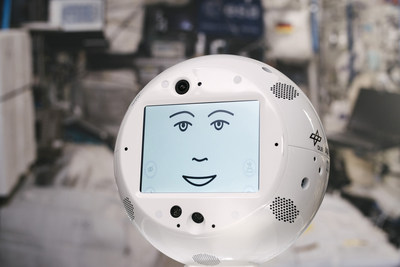 The hope is to ultimately make CIMON function as more than just a machine. “CIMON’s digital face, voice and use of artificial intelligence make it a ‘colleague’ to the crew members,” Biniok wrote on IBM’s Think blog in February.

Philipp Schulien, Airbus’s lead system engineer, says “It even has the ability to engage in small talk.”

News of the project quickly captured the imagination of us earthbound humans.

Reuters dubbed it “an English-speaking droid roughly the size of a basketball… the first personal, artificial intelligence-powered companion in space.” Or, as Business Insider put it, the development team is “training a floating head to be a friend.” Manfred Jaumann, Head of Microgravity Payloads from Airbus, calls CIMON “a kind of flying brain,” and Airbus’s website describes CIMON as a “free flyer fueled with artificial intelligence.”

The Washington Post sees CIMON as “a sort of Alexa in space, able to help astronauts through the steps outlined in a manual, show pictures of certain parts of the experiment and answer questions about it.”

But unlike most voice assistants, this one is mobile — and autonomous — with a battery runtime of two hours. IBM likes to point out that it’s the first robot ever allowed to move autonomously around the International Space Station. The BBC notes it has 14 different internal fans to help it maneuver. And CIMON will be constantly learning, and according to the Associated Press, it will remain on the space station indefinitely, “continually getting updated via IBM’s Cloud.” Though it’s also equipped with an “offline” button, according to the BBC, “which allows Gerst to avoid having audio streamed to servers on Earth during moments of privacy.”

There are three experiments planned with CIMON. In one CIMON will behave as “an ‘intelligent’ flying camera,” according to Airbus. Reuters points out CIMON has eight different onboard cameras. Another experiment involves crystals, and a third involves seeing whether CIMON can help Gerst solve a Rubik’s cube. 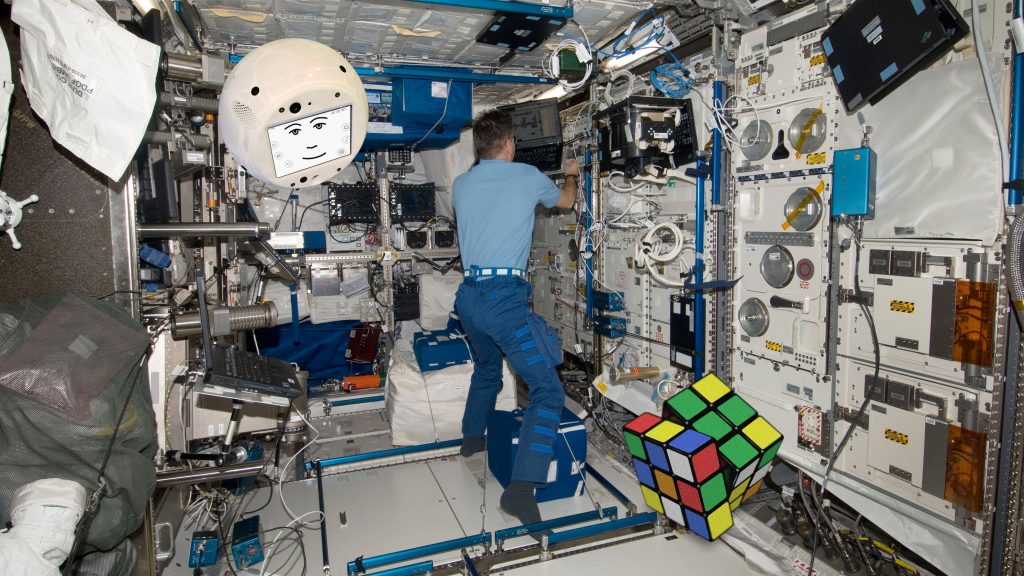 While CIMON can display procedures, it’s also designed to suggest solutions to a problem. And in addition, Airbus adds, “it can also serve as an early warning system for technical problems.”

“I am the first interactive crew assistant in space,” it explains in a video shared by Airbus. “I am a free-flying intelligence providing all kinds of digital services.”

But of course, it sounds a little creepier when its synthetic voice reads that out loud…

Tomorrow CIMON, the astronaut assistant 👨‍🚀 will join @Astro_Alex on the ISS @space_station in a #Dragon cargo from Cape Canaveral 🚀
The AI-based companion was developed by @AirbusSpace in cooperation with @IBM for the German Space Administration @DLR_de. #innovation #NewSpace pic.twitter.com/4akQokkEYw

In fact, CIMON is launching into space exactly one-half century after the release of the Stanley Kubrick’s film  “2001: A Space Odyssey,” which is prompting some darker comparisons. An entry on IBM’s project journal even notes that CIMON boasts “the technical know-how of HAL 9000, from ‘2001: A Space Odyssey’ — just, you know, without the evil part.”

“Biniok remembers watching the latter film for the first time just before starting work on CIMON, and thinking ‘…oh. That’s gonna be a big issue.'”

But programmer Nina Fischer also “loaded” the AI with quotes from other science fiction movies, which the IBM project journal describes as Easter Eggs for the astronauts to discover — for example, this nod to Yoda. If an astronaut tells CIMON “I’ll give it a try,” CIMON replies, “Do or do not. There is no try.”

And if they say something about phoning home, “he’ll do a passable imitation of ET the extra-terrestrial.” 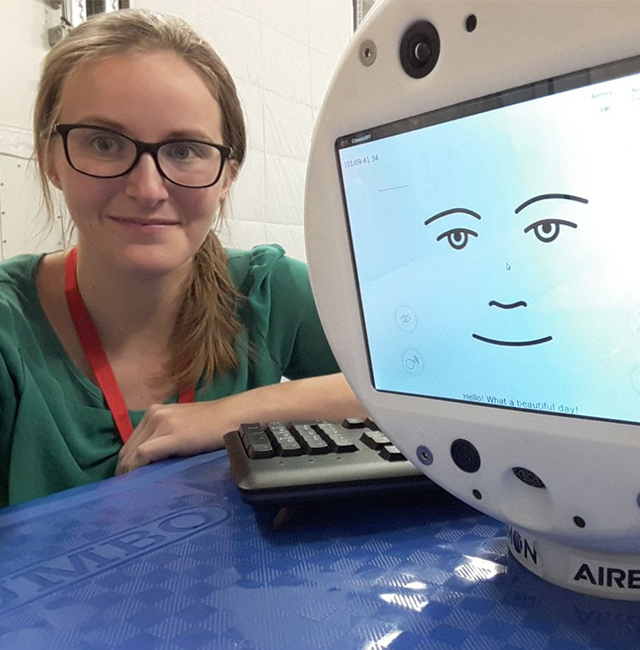 Originally CIMON’s responses “ranged in tenor from friendly to downright snappish,” according to the project journal.  Psychology student Sophie Richter-Mendau felt CIMON needed a more consistent personality, and followed the guidelines from the Myers-Briggs personality classifications — a logical, thinking introvert. She added a sense of humor, and IBM credits her as “the architect of his personality.”

“CIMON had to learn to understand and act upon human intent,” reports the project journal. “The goal was simple: CIMON had to be a conversational partner that you actually wanted to hang out with… He can assist astronauts in technical processes, or cheer them up if they indicate that they’re lonely.”

At the University of Sheffield, AI expert Noel Sharkey told the BBC there’s a lot at stake for the future of robots. “It is only in the experimental stages at present and if it is not useful, no space agency will want to waste incredible valuable space with it.” But others predict social interactions with machines could someday have a role in long-term missions of the future — for example, on a lengthy journey to Mars. And that could be just the beginning, according to CIMON’s page on the Airbus site. “Airbus’ developers are convinced that, here on Earth, developments of the assistance system could also find future use in hospitals and social care.”

Maybe it’s all proof that technology can lead you in unexpected directions. Before working on CIMON, Biniok was using Watson to assess damaged cars for insurers, and had also helped Watson create virtual assistants for banks and airlines. “The ISS needed a virtual assistant that combined conversation services, work assistance, facial recognition and navigation capability,” explained the CIMON project journal.

“Biniok felt like he’d been training for just this challenge and set about building a prototype.”

SHARE THIS STORY
RELATED STORIES
Why 'Explainable AI' Can Benefit Business How Jit Builds a Platform Engineering Mindset in the Cloud 5 Ways ChatGPT Could Supercharge Chatbots Golden Paths Start with a Shift Left Entrepreneurship for Engineers: Building for Customers’ Love
SHARE THIS STORY
RELATED STORIES
Platform Engineering Won’t Kill the DevOps Star How to Get Started Filling 3.4 Million Cybersecurity Jobs Why 'Explainable AI' Can Benefit Business Java's James Gosling on Fame, Freedom, Failure Modes and Fun Donald Knuth's 2022 'Christmas Tree' Lecture Is about Trees
THE NEW STACK UPDATE A newsletter digest of the week’s most important stories & analyses.
The New stack does not sell your information or share it with unaffiliated third parties. By continuing, you agree to our Terms of Use and Privacy Policy.