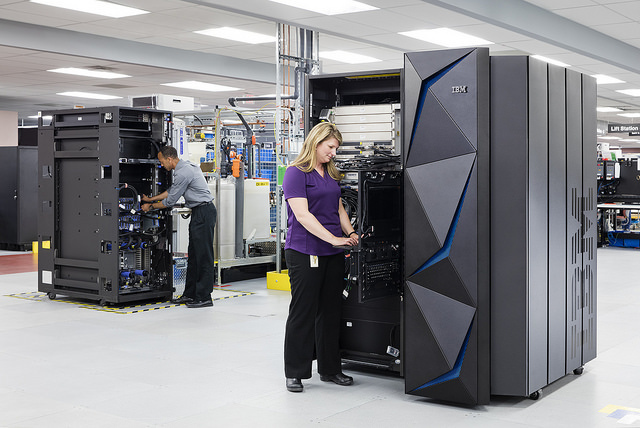 Mainframes evoke fond memories of the early days of computing, though IBM has been modernizing these systems to secure business operations and incorporate new technologies like blockchain and machine learning.

IBM’s new Z mainframe specializes in cryptography processing but is also faster than its predecessors at transaction processing. Large companies — especially financial firms — looking for better ways to protect their systems could take a look at the Z14, which can power 12 billion encrypted transactions a day, according to IBM.

The Z14 mainframe has four times more silicon dedicated to security processing compared to its predecessor, the Z13. There’s also a better correlation between transaction processing and bulk data encryption and decryption to cut any bottlenecks. Overall, IBM estimates that there’s a seven times improvement in cryptographic performance over the z13.

That’s especially important for the financial, insurance and banking sectors, which for long have relied on mainframes to process transactions. Financial firms are the targets of dozens of hack attacks a day, and the ability to speed up systems while incorporating faster security processing is an attractive proposition. IBM is focused on increasing the mainframe performance, but scaling cryptography processing clearly took precedent.

The mainframe also needs faster cryptography processing because it is securing all files and data on a system, which helps companies meet compliance and regulatory requirements.

“By encrypting data and properly protecting the keys that enable decryption, enterprises can create a new defensive perimeter that will prevent internal and external users from viewing data unless they are authorized to do so,” said Joe Clabby, an analyst with Clabby Analytics, in a research note.

The keys are protected in “tamper-responding” hardware, and thus not exposed to the memory from which the keys could be hacked, according to IBM. The security processors are implemented in a multi-chip module.

The Z14 supports IBM’s z/OS and Linux operating systems. The z/OS is built more for stability, but it also has new toys to take on hot applications like analytics and machine learning, which are being used in more companies that gather vast amounts of data. The Machine Learning for z/OS opens up some tools to users of the z14 to analyze structured and non-structured data. Banking firms make risk and financial projections based on analytics, and insurance companies try to prevent fraud.

There are many machine learning frameworks like TensorFlow, Caffe and Theano, and it’s not known if those are implemented in Machine Learning for z/OS. It’s likely that Machine Learning for z/OS tools is implemented internally by IBM and based on the homegrown PowerAI tools. But it’s a start of bringing machine learning to the mainframes, which traditionally haven’t been designed for artificial intelligence. The mainframe would need chips like GPUs to boost AI performance.

Nonetheless, the IBM Z14 mainframe has some muscle for machine learning and analytics. It supports up to 32TB of memory, which is a three times improvement over the Z13. The I/O subsystem is three times faster, and it has a faster transaction processing engine so applications are more responsive. The mainframe is built for security, but has the features to act on live transactional data, said Charles King, principal analyst at Pund-IT.

One might think the mainframe is best suited to put in the back office, but IBM is readying Z14 for cloud applications too. IBM has been particularly aggressive on blockchain, a distributed database technology attracting the interest of many companies already using mainframes.

IBM is putting the Z14 mainframe on the IBM Cloud mainly as an “encryption engine for cloud services and to run IBM Blockchain services,” according to the company. Given the Z has a super fast cryptographic engine, it makes sense to put it in the cloud over other industry standard x86 systems. It’ll also be a showcase for customers who want to implement blockchain in their business processes.

Pricing of the new mainframe takes a new path and is based on usage of computing resources. The so-called container model is based on metrics like transactions per hour, development environments or payment systems rather than based on hardware or the size of the partition. The pricing is also designed to facilitate on-premise and cloud deployments.

IBM didn’t provide guidance on pricing, but mainframe orders could run into millions of dollars. For the DevOps pricing model, companies can manage separate software development partitions and not mix containers with other models, which may be based on transactions or payment systems.