IBM’s pending acquisition of Red Hat for $34 billion “changes everything about the cloud market,” asserted Arvind Krishna, IBM senior vice president for hybrid cloud, as well as the director of IBM Research, in a conference call with the press on Monday.

In the press conference, Krishna sketched out IBM plans to use Red Hat’s technology and expertise to serve as an entryway for the enterprise to fully use cloud resources, both those in-house and available from public services, such as IBM’s own.

IBM is focusing in on the servicing the enterprise hybrid cloud, which offers the ability to shift workloads from internal environments, those that are in IBM’s wheelhouse, to the cloud providers. Key to this strategy are the cloud native tools such as Kubernetes, which Red Hat — as well as CoreOS that Red Hat acquired earlier this year — has been instrumental in helping to develop.

With such open technologies, “We can help [customers] move their applications and business processes from one cloud to another, securely and freely,” Krishna said.

In turn, the acquisition will help Red Hat, which will remain a stand-alone business unit of IBM, in terms of better reaching its core enterprise software market. “We’re still a relatively small company, where customers are seeing open hybrid cloud as the only way to bring the public cloud into their IT infrastructure,” said Paul Cormier, Red Hat’s Executive vice president, during the same IBM briefing. “At our current size, we can’t recognize the real potential of that demand. IBM helps us bring that strategy to 170 countries around the world.”

In February 2018, Red Hat reported $2.9 billion in annual revenue, 88 percent of which came from corporate subscriptions.

“Hybrid cloud” has already reached its peak in the hype cycle, with “multicloud” being a more popular term these days. A RightScale survey in February showed that Hybrid Cloud was dropped from 58 percent to 51 percent as the dominant strategy. In a different survey from Virtustream, 86 percent said they are using a multicloud strategy.

Multicloud does not quite mean the same thing as hybrid cloud. In the Virtustream survey, 32 percent say their multicloud strategy described “Using multiple public and private clouds for different application workloads.”  Two years ago, SolarWinds found that most 56 percent were not even considering using hybrid cloud, but of those that used hybrid cloud, 72 percent were using or considering automation/orchestration tools for infrastructure. 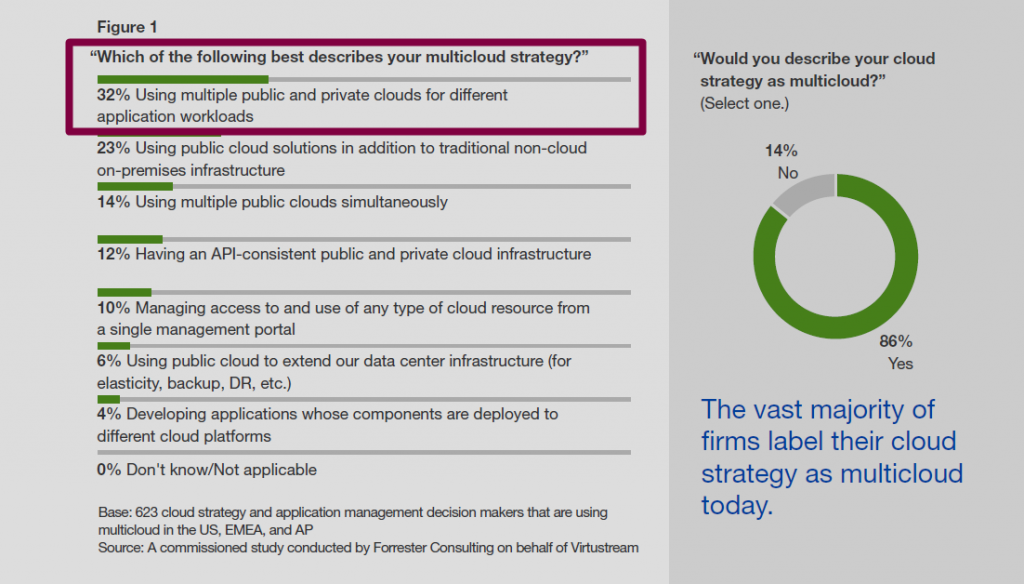 Only 15 percent of cloud users actually will do “hybrid,” where more than one cloud is used to deliver a specific business function. Some data here that we collected is over a year old, but the percentages haven’t changed much because most are still just managing multiple clouds separately.

Cormier noted that as Red Hat got started, the market for Linux distributions were a commodity one, in which Linux served as a lower-cost, and sometimes more robust, alternative to proprietary Unix operating systems. Over time, Red Hat built up and bought a middleware portfolio, including everything from the JBoss application server for enterprise Java, to cloud native technologies such as the Istio service mesh. Red Hat now offers not one but two Kubernetes distributions, Red Hat’s own OpenShift and the CoreOS Tectonic. In short, the company has the technology stack for managing cloud workloads that can run both internally and also on the public clouds. 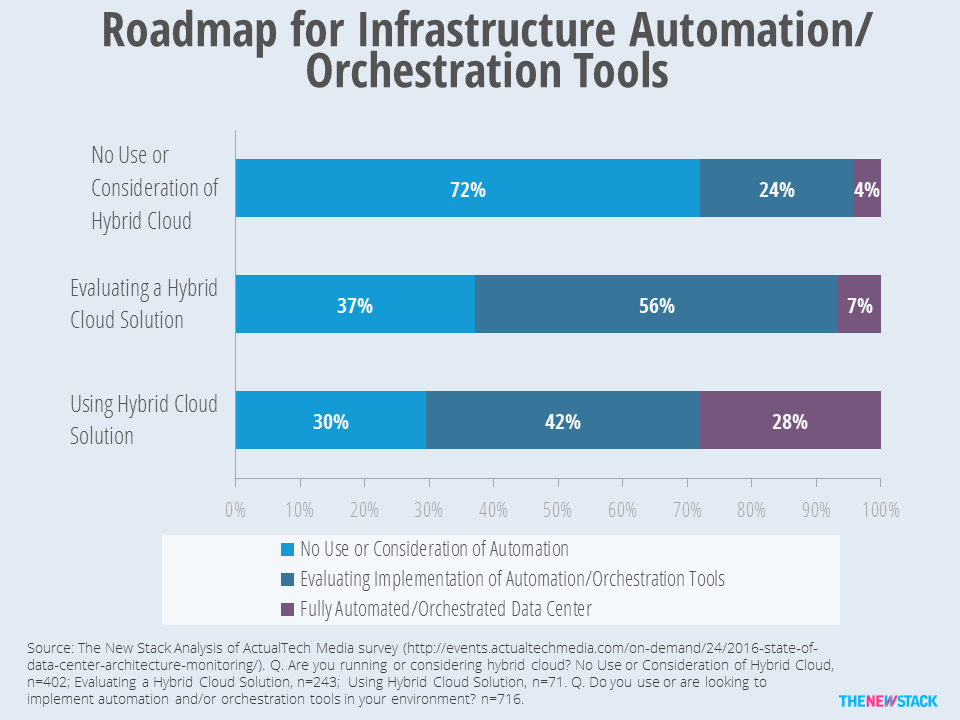 Overall, the acquisition should have no impact on all the open source projects currently maintained by Red Hat, Cormier said. “The day after we close, I don’t intend to do anything different than we do every other day,” he said. “We build our roadmaps, based on what our customers are asking about, so I don’t see any changes in that.”

For its part, IBM can easily mesh with the work Red Hat is doing. “Kubernetes is the center of our cloud-native strategy,” Krishna said.  Both IBM and Red Hat contribute to the Kubernetes ecosystem. In the last year, 16 percent of K8s contributions came from Red Hat, and 2 percent from IBM (Google was still tops with 26 percent).

Even before this a planned acquisition, Red Hat and IBM had started collaborating, both agreeing that the route to hybrid cloud would come from using a common fabric based on Linux containers and Kubernetes, along with all the automation and security tools supporting this architecture.

“We are convinced that containers and Kubernetes together are as big as TCP/IP” or HTML/HTTP, Krishna said, noting how these open protocols paved the way for different networks to universally work together, as users preferred them over various proprietary solutions.

One can forget what a large core of open source developers IBM has. Overall, IBM has 23 times as many devs/programmers as Red Hat, though only 1 percent of IBM developers are identifiable on GitHub (through their email addresses), whereas 25 percent of Red Hat employees use their corporate email addresses on GitHub.

IBM does plan to bring OpenShift, which Cormier argued is the most successful Kubernetes distribution to date, to the IBM Cloud, though IBM will be careful to maintain the unbiased nature of the software that Red Hat has maintained across different cloud service providers.

One worry, expressed by a number of current and former Red Hat employees is how IBM will maintain the unique open source-focused culture nurtured by Red Hat. When asked, Krishna replied that he wants to preserve Red Hat’s engineering-driven culture, one that “allows engineers to debate the way to best satisfy the client,” he said. “It’s not about top-down hierarchies.”

Likewise, IBM itself is no stranger to open source, creating a wide library of popular open source tools that range from the OpenWhisk serverless software to Node-Red Node.js distribution for Internet of Things.  So IBM might have lessons to share to Red Hat about how to manage open source projects.

“That doesn’t mean we are changing the culture of Red Hat,” Krishna said. “It just means they can add some things but on their decisions of what they feel is appropriate.”

The two companies estimated that the deal would close by the end of 2019. At which time, Red Hat would be part of  IBM’s Hybrid Cloud division as a stand-alone unit. Jim Whitehurst and Red Hat’s current management team will continue to manage the company, while Whitehurst will join IBM’s senior management team.

Lawrence has generated actionable insights and reports about enterprise IT B2B markets and technology policy issues for almost 25 years. He regularly works with clients to develop and analyze studies about open source ecosystems. In addition to his consulting work,...
Read more from Lawrence E Hecht
SHARE THIS STORY
RELATED STORIES
Install Dozzle, a Simple Log File Viewer for Docker Spotify's Backstage: A Strategic Guide The Latest Milestones on WebAssembly's Road to Maturity Driving Digital Experiences via Cloud Native Applications 10 Essential Practices for Building Software for Cloud Scale
SHARE THIS STORY
RELATED STORIES
Do You Need a Managed Database? Meet SIG Cluster Lifecycle and Cluster API Maintainers at KubeCon How Donating Open Source Code Can Advance Your Career Driving Digital Experiences via Cloud Native Applications OpenTelemetry Properly Explained and Demoed
THE NEW STACK UPDATE A newsletter digest of the week’s most important stories & analyses.
The New stack does not sell your information or share it with unaffiliated third parties. By continuing, you agree to our Terms of Use and Privacy Policy.