IKEA’s Concept Kitchen of 2025: It Cooks, Interacts and Composts 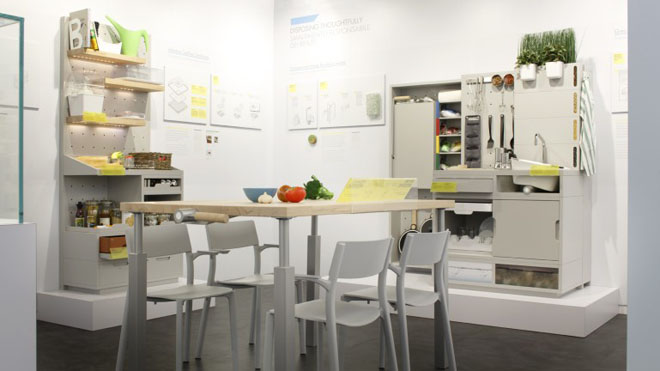 Integrating smart home technologies with induction cooking and eco-friendly practices like composting, water conservation and recycling, this Concept Kitchen of 2025 points to a new way of living. It shows how our dwellings will change, as will our climate and the way we live in ever more densely populated cities.

The kitchen has undergone a series of technological revolutions since the middle of the last century. Refrigeration became more widespread in industrialized nations, various appliances like the dishwasher and food processor made their appearance, reducing the daily labor needed to keep a household clean and fed. Vintage advertisements painted a future where kitchens were large, gleaming arenas of convenience and abundance, a place where food was not only cooked, but where the latest developments in technology played out.

But the role of the kitchen is constantly evolving, as do human habits. Increased urbanization and increasingly urgent issues of sustainability mean that the kitchen is a ground zero of sorts, where carbon emissions can be reduced by limiting food waste, generating compost, and integrating multi-functional furniture into ever-smaller spaces. The gradual mainstreaming of the smart home concept and an Internet of Things could bring unexpected technological innovations into the kitchen as well.

That’s the premise behind Concept Kitchen of 2025,  a collaboration between IKEA, IDEO London and students at the universities of Lund and Eindhoven. Based on emerging factors like an aging population, urban densification, smart technologies and increasingly limited resources like food and water, the Concept Kitchen poses the question: “How will we behave around food in 2025”?

It seems that in 10 years, spaces like the kitchen may be merged with living zones. At the heart of the Concept Kitchen is the Table for Living, a work surface that multi-functions for food preparation, dining, work bench and even a children’s play area. 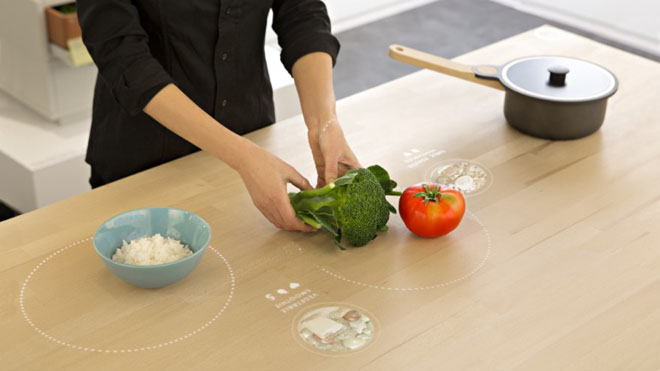 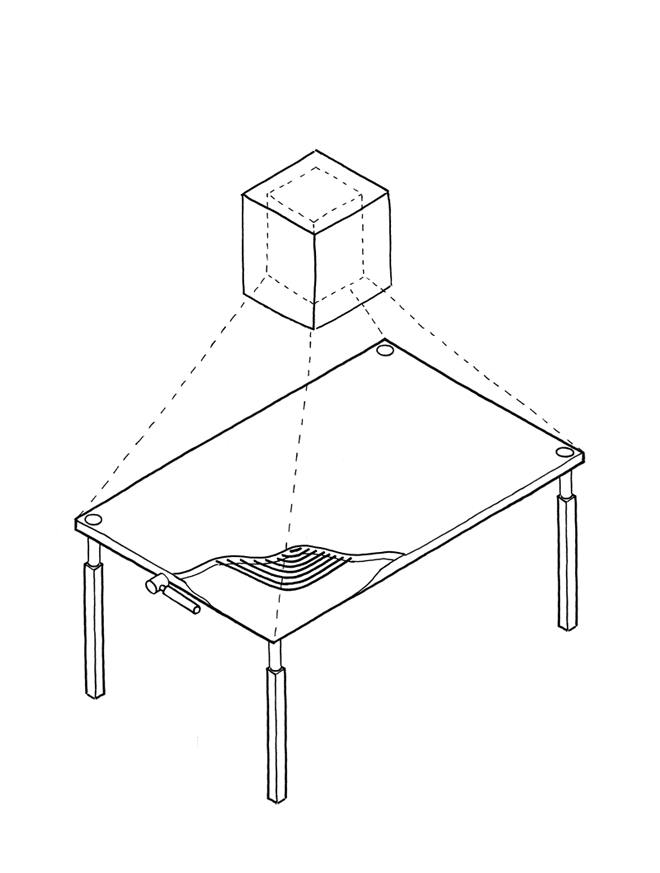 Positioned above the table is a camera and projector, and hidden underneath are induction coils which turn the tabletop into a stove or a charger for electronic devices. When networked together and connected to the Internet, recipes can be displayed via projector when foods are placed under and recognized by the camera. The designers say that interactivity will be built-in:

This is ‘Casual Technology’: tools that give us control and guidance when we need it, but are otherwise hidden — a surface simplicity that minimizes distractions and allows for mindful engagement with food. 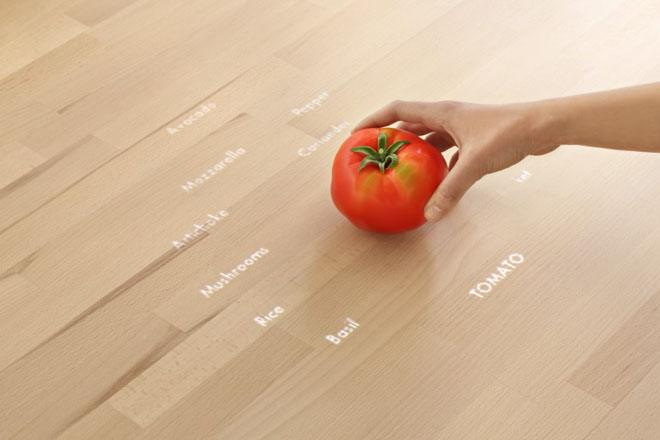 The aim is to use technology to lessen food waste and increase efficiency in the kitchen. Cooking will become a seamless activity, rather than a head-scratching chore, and the technology will be especially helpful for the culinarily challenged. Food storage will change too: instead of a cavernous refrigerator where things are forgotten and left to rot at the back, shelves using the same induction technology and sensors will cool food in special containers, employing magnetic, stainless steel-gadolinium alloy bases, displayed in full view where they can be quickly used. 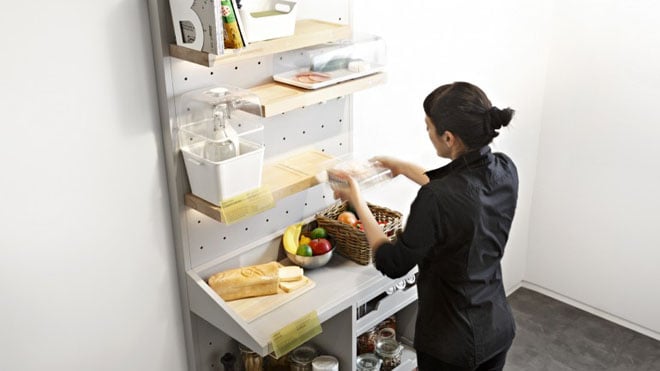 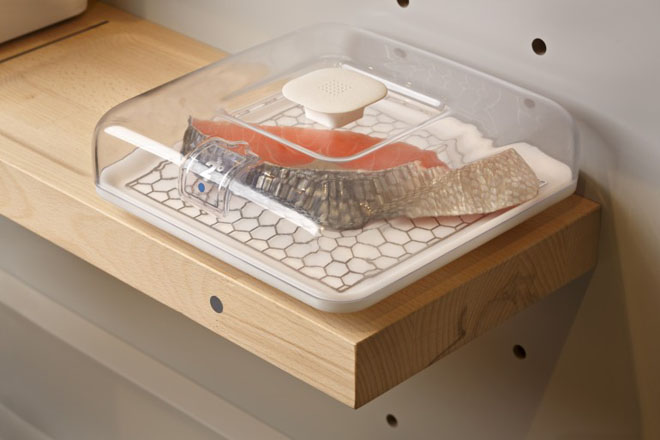 Radio-frequency identification (RFID) tags accompany the food, which can be moved from packaging to container, so shelf sensors know what temperature it should be stored at. When transferred to the Table for Living, these multi-use containers will switch to heat. Low-tech terracotta containers — a modern interpretation of an ancient idea — are used to store tubers and garlic.

Elements to encourage personal sustainability are also cleverly integrated within the kitchen, and presupposes that cities of the future will be charging residents for every pound of garbage generated, and rewarding them for recycling. Recycling is sorted by hand and electronically recorded and analyzed, earning residents an energy credit or debit. 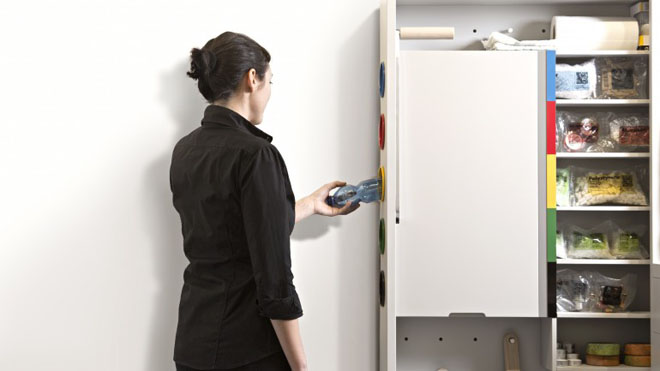 Water conservation is facilitated through a sink that can be tilted one way to direct greywater up to an integrated mini-garden above; blackwater can be directed away by maneuvering the sink the other way. 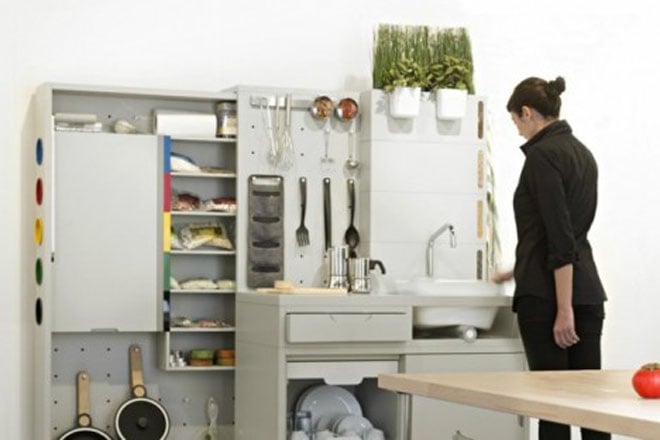 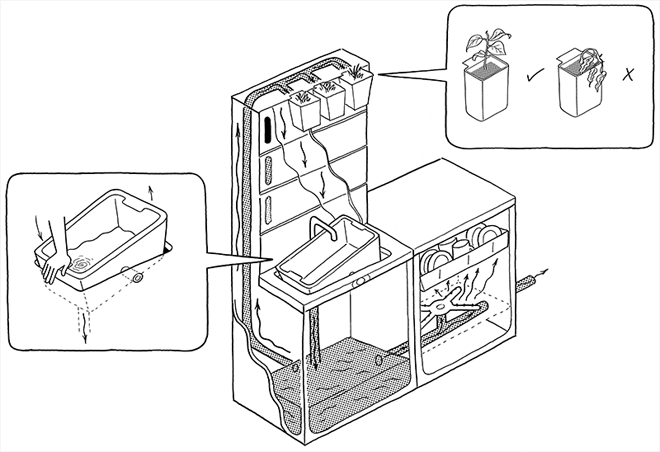 Composting is hidden under the sink, where a device will extract water from discarded food and compress it into a “dry, odorless” puck, ready for municipal pickup. 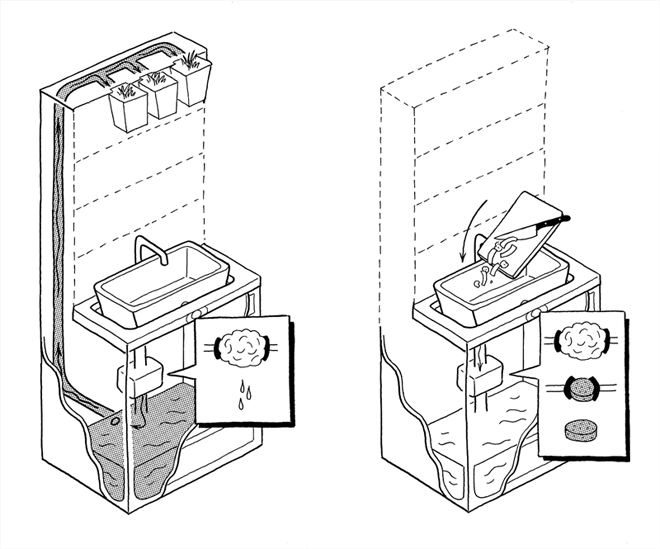 A Humanistic, Expressive Approach to Technology

Though the Concept Kitchen proposes a whole slew of new possibilities, there are some lingering questions about how the design would store, process and analyze the mass amounts of data that such a kitchen would no doubt generate. With the integration of “unobtrusive” technology in such a daily refuge, what kinds of “data exhaust” would we be ultimately generating, and how might it be structurally organized and shared?

These details are not clear, but it’s not the focus, according to University of Eindhoven PhD candidate Jelle Stienstra, who supervised the design students on the project. Stienstra tells us that Concept Kitchen was designed from a more subjective, humanistic and phenomenological perspective, rather than an objective engineering point of view, explaining:

It is not that people adjust their behaviours to technology, it is technology that respects the uniqueness of the user and further enables users to discover and develop themselves. [The kitchen’s design] does allow users to develop their own skills. They will become more engaged with the cooking.

Ethically, I consider engagement and self-expression in the kitchen a desired direction opposed to a kitchen that cooks for you (supporting laziness). Being (mindfully) engaged with food, is a form of sustainability, and this is supported in the design.

This is not an automatic kitchen of the future, but a kitchen that requires interaction and conscious engagement, allowing the user to learn at their own pace. Even if the technical details would need a few years to be ironed out, could elements of this streamlined, eco-conscious kitchen be widely implemented in 10 years? Ultimately, there are a lot of things to like here: the Concept Kitchen of 2025 is a space-efficient design that emphasizes multi-purpose functions — a trend that’s growing as living spaces get smaller. Smart technologies that are so well-integrated that they are almost imperceptible, permitting users a greater level of self-expression in the kitchen. The idea of a central work surface that is both interactive and cooks is clever, though some hardcore chefs may argue that it may take some of the intuitive creativity out of traditional cooking.

Nevertheless, the notion of being able to place an ingredient on the counter and to instantly get recipes or other data is pretty tantalizing. Best of all, the synthesis of water, waste and recycling into one whole kitchen apparatus would be a major step toward easing sustainable practices right into millions of homes worldwide, considering the global popularity that IKEA enjoys. It’s the kind of kitchen that isn’t pretentious, and might actually be useful and reduce our collective carbon footprint, to boot. The Concept Kitchen 2025 can be seen at the IKEA Temporary exhibit in Milan; you can find more information over at Concept Kitchen of 2025.

SHARE THIS STORY
RELATED STORIES
WebTV in 2022? Vintage Tech Enthusiast Shows How on YouTube Low-Code Tools Improve Devs' Work-Life Balance, Survey Finds It's No Longer about How You Write Code but How You Operate It Devs and Ops: Can This Marriage Be Saved? Tackling 3 Misconceptions to Mitigate Employee Burnout
SHARE THIS STORY
RELATED STORIES
Engineering Leaders: Switch to Wartime Management Now What Is a Sociotechnical Knowledge Map and Why You Should Care eBay: Betting on Open Source Is Great for Your Business Building an Internal Developer Platform Isn't Just about Tools The Graph of Life in a Post-Relational World
THE NEW STACK UPDATE A newsletter digest of the week’s most important stories & analyses.
The New stack does not sell your information or share it with unaffiliated third parties. By continuing, you agree to our Terms of Use and Privacy Policy.