Installing MPI for Python on a Raspberry Pi Cluster 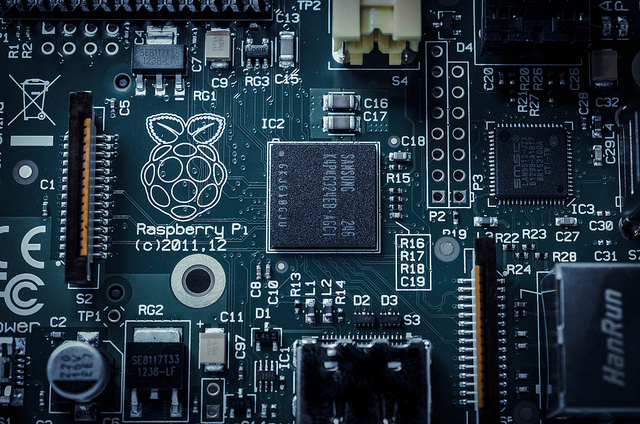 We set up a computing cluster running five Raspberry Pi’s for a project in Africa. The machines ran on solar power with the idea of supporting 2000 to 10,000 concurrent connections. The cluster also ran Docker.

We then wanted to allow a Python program to exploit the multiple processors of the cluster to perform various tasks. To accomplish this, we needed to install the message passing interface (MPI) for Python, which provides binding of the MPI standard for the Python programming language.

This article describes how to install and test the MPI for Python and assumes that the Raspberry Pi cluster is running the latest Raspbian OS. The MPICH2 interface should also be installed and operational.

The MPI for Python software needs to be loaded individually on each cluster node, so being able to log in using a secure shell (SSH), is required. If you already know how to use SSH, you may skip the next section and just proceed to the MPI for Python installation and testing instructions. Let’s see how to get going with SSH.

SSH stands for secure shell and is an encrypted remote login protocol. Once it has been set up on each node, it’s used to communicate with the other nodes on that network.

The main benefits of SSH are:

To log in to another node from the master node use the following command.

Enter your password. Once you log in, all the commands you type will run on that node and not on the master.

SSH can also be used to run commands directly on the other nodes. For example, to change the host name on three of the nodes, use these commands:

The following figure shows how SSH is used to log in to a worker node (192.168.3.216) and from the worker node, get the control terminal back to the master node. 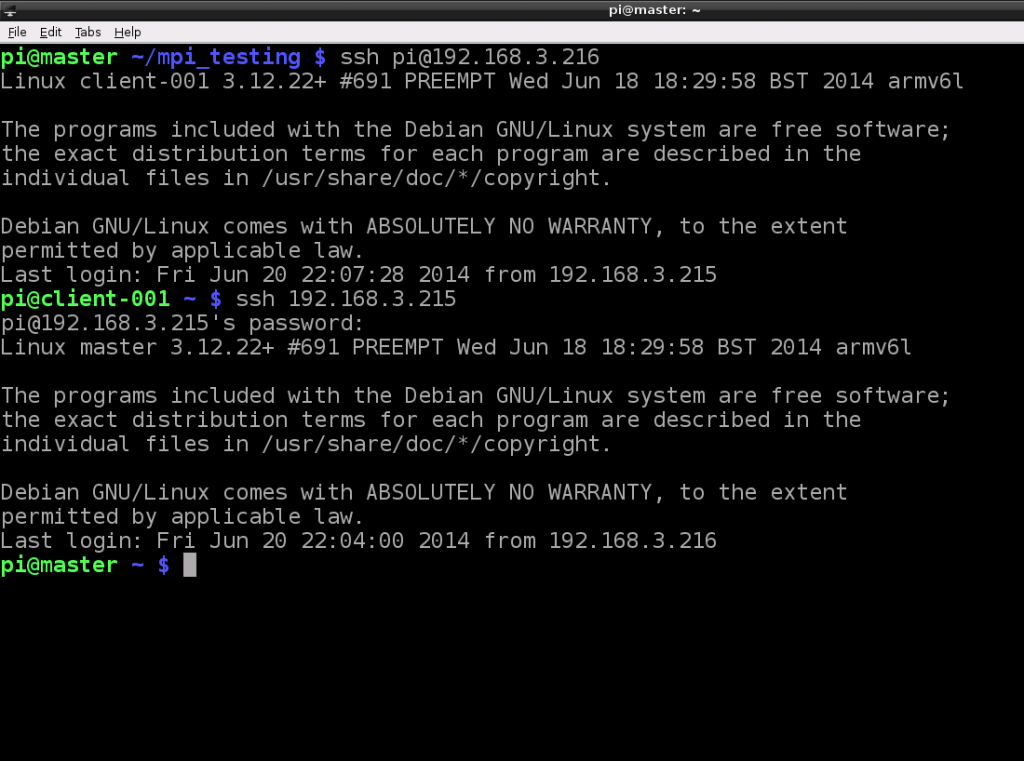 As you can see in the above figure, logging in to a worker node happens directly. But each time the control of the terminal comes back to the master node (192.168.3.215), the login credential has to be re-entered.

So after issuing commands via SSH to other nodes, there might be situations where data has to be sent to multiple nodes over SSH. If the number of nodes are small, then we can manually log in to each node, connect it to a display and keyboard, and send files. This is a highly inefficient way to do it when the size of the cluster is large.

The easy way is to use SCP to send the files. Install SCP using the following command.

The general form of the command is as follows:

Take a look at this example.

Here, the file is sent to the remote device using it’s IP address. Many files in a directory can be sent using the recursive option (-R), such as the following.

This command recursively transfers all the files in the /pi/project directory from the local host to the directory on the remote host, identified by the IP address.

With remote login using SSH out of the way, we can now turn our attention to installing MPI for Python on the cluster.

The conventional way to load MPI for Python, known as mpi4py, will not work. It is usually installed with the following command line.

This approach will crash when executed because it installs a copy of openMPI, which conflicts with the already installed MPICH2 software. MPICH2 system is designed to run only one interface and when multiple instances are started, the whole cluster fails.

To avoid this grave situation and the tedious task of restoring the operating system back to its previous state, a work-around exists. It’s a relatively straightforward matter to build mpi4py manually, on each of the nodes in the cluster.

Here are the steps.

You can use wget instead of curl but I couldn’t find an option that bypasses the certificate issue that hasn’t been resolved by the website maintenance team.

2) Unpack it and then change into the mpi directory.

3) Before starting the build, it is important to make sure that all the Python development tools are available. This ensures that many important header files like Python.h are present and can be used by the build function.

This step can be skipped if the python development tools are already installed.

A few things need to be noted here:

Now we can start the build. Change the working directory to mpi4py:

Next, run the following command

Once the command finishes, repeat the process on every other node in the cluster. Then the demo program helloworld.py can be run to test if mpi4py is installed on all the node successfully and is running correctly.

At the command line execute the following.

If the nodes of the cluster aren’t already built, then the easier way to do it would be to perform the above procedure on one node and read the entire image of the OS and write it into the SD cards of each of the other node. This would eliminate building the mpi4py package on each node individually.

We just finished building mpi4py so that we can write and run Python programs using MPICH. We need to test mpi4py and make sure everything is working correctly.

You should have a file named machinefile (example screenshot below) that stores the IP addresses of all the nodes in the network. This will be used by the MPICH to communicate and send/receive messages between various nodes. 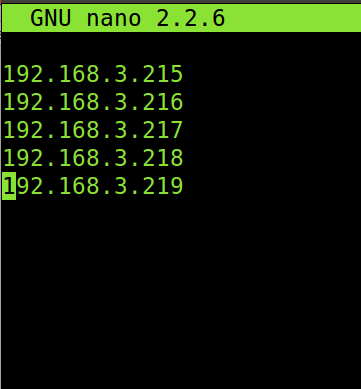 In the extracted directory mpi4py, there is another directory named demo. The demo directory has a variety of Python programs that can be run to test mpi4py.

A good, basic testing program is helloworld.py. The procedure to run it is:

The output should look something like the following screenshot.

If the output looks similar to the above and all the nodes have been included, then it works.

Note that ~/mpi4py/demo is the path to mpi4py on my system and should be replaced with the one under your username. The same goes for the path to your machinefile.

There are other programs in the demo directory that can also be used.

A few benchmark programs have been created by Ohio State University.

Many of the other programs in the demo directory can also be used for testing. All of these can be run in a similar way to the helloworld.py program.

The following screenshot shows the output of the osu_latency.py program. 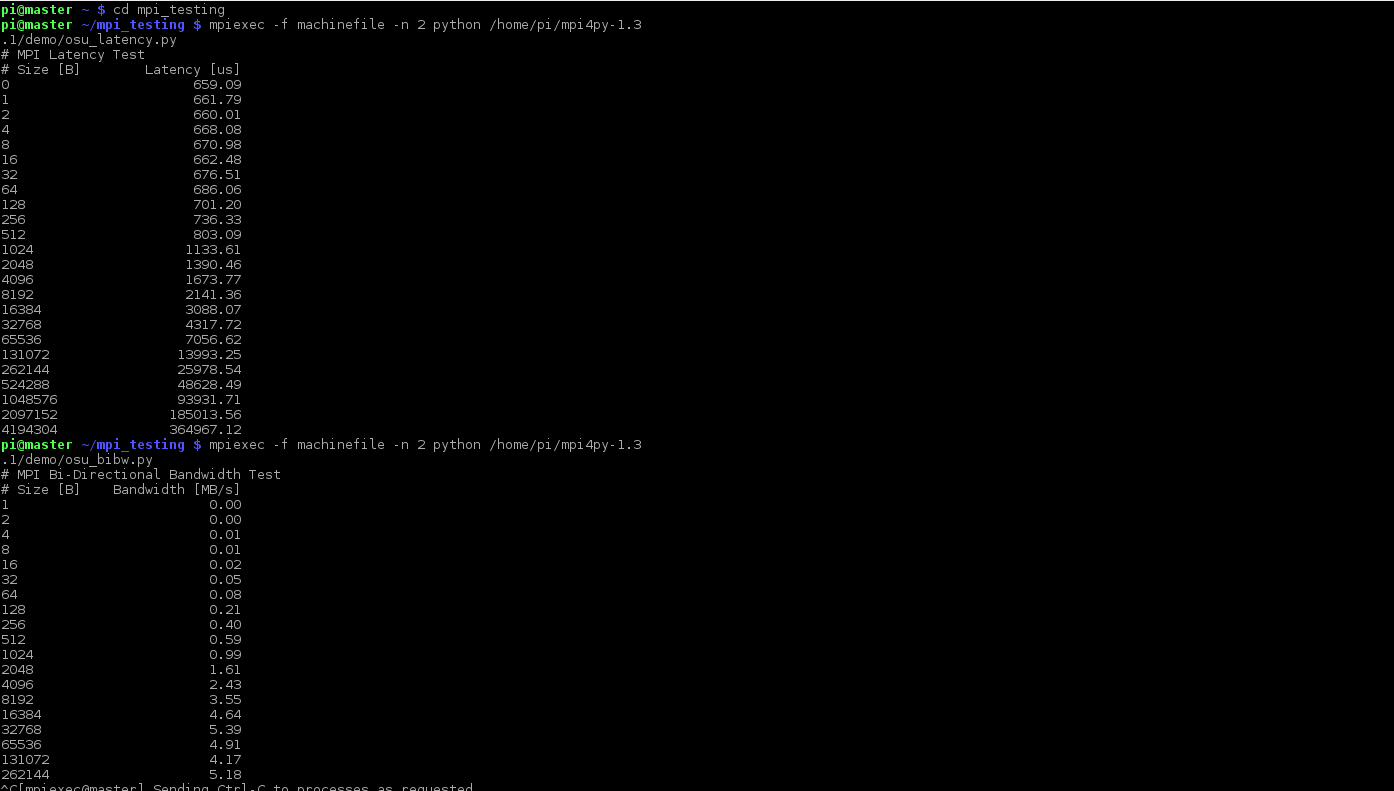 Once testing is done, programs compatible with MPI can be written using Python. All the nodes in the cluster should run the same program and depending on conditions, executes only a part of the program, thereby allowing parallel execution. 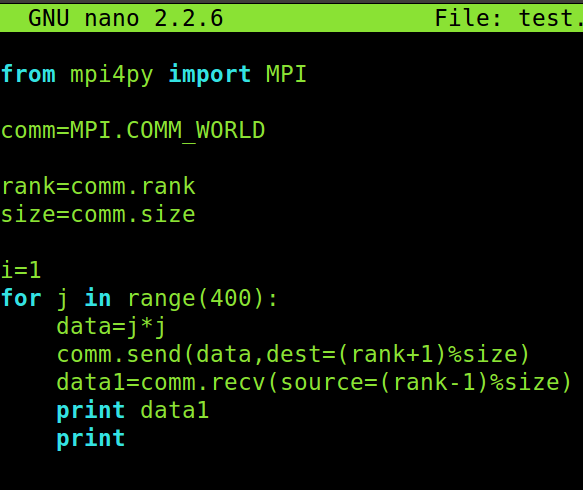 The file is a communicator application that contains several methods and gathers some process information. I called it MPI.COMM_WORLD. Its features include the following.

These are the basic functions and many other functions are available, to create MPI compliant Python programs.

Note that if edge conditions exist and the number of processes exceed the number of nodes, then the execution of the program will fail. To avoid this situation, the processes can be given a loop around by using the %size operation as shown in the screenshot above. The process would then wrap around to the first processor to do the task.

We’ve taken a quick tour through how to use SSH, install MPI for Python, and how to test the finished installation. A lot more can be done with this cluster, including adding more nodes. Give it a try and be sure to share your experiences in the comments.