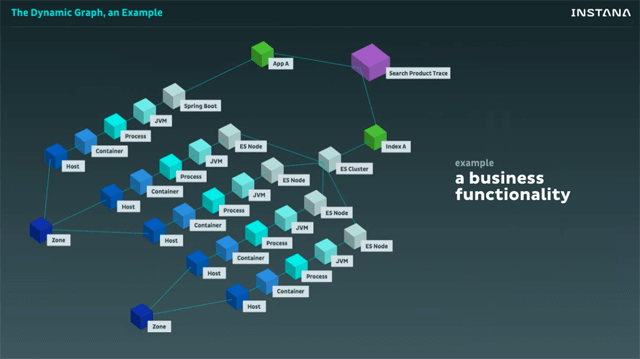 The challenges of infrastructure and application monitoring have become a common theme in the age of microservices.

German startup Instana takes a holistic view of the challenge of microservice monitoring, combining views of the server level, the application level and network level. Ultimately it is the quality of service that admins should really care about.

“We’re convinced the market wants a production monitoring tool that discovers that whole application structure — not just the piece parts, but the services to be monitored — and automatically keeps up with all the change that’s constantly happening, recognizes all the issues at any layer, but correlates issues to quality of service where it counts and allows you to really understand where the real problem is and be highly efficient in solving problems,” said Pete Abrams, Instana chief operating officer. 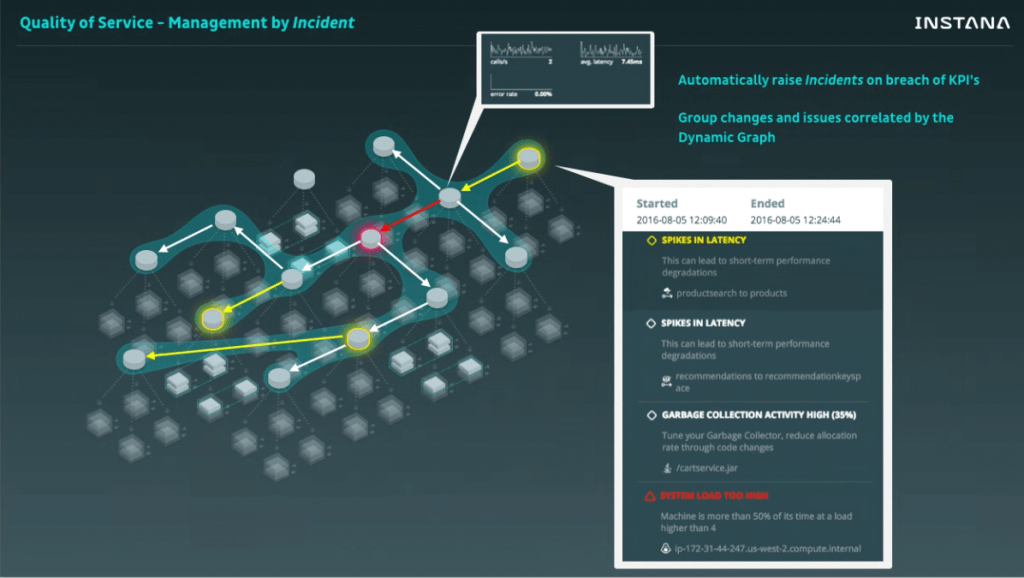 Even the most recent monitoring tools have focused on “filling a huge screen with a bunch of time charts,” according to Instana product marketing manager Enrico Bruschini. “Then there’s this poor guy staring at the screen trying to find [problems].”

That doesn’t work anymore with the amount of data generated in a microservices environment. Instana adds machine learning and artificial intelligence to discern the meaning of the data.

Instana uses agents installed in each host for local discovery of the infrastructure and its dependencies. It collects data in one-second increments, then uses that data to build a 3-D model, which it calls Dynamic Graph, of all the components to establish what a healthy infrastructure should look like. 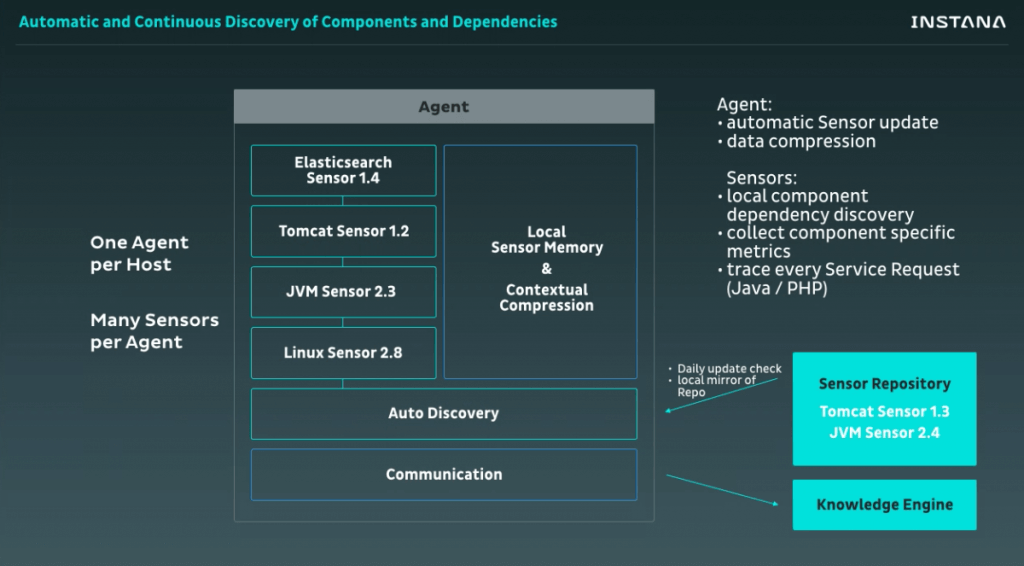 “Because we can understand the application service quality, we can see how all the requests are functioning across the entire infrastructure,” Abrams said. You can even drill down to see how code performs in given situations.

It’s basically a back-end data-streaming engine with machine intelligence built on top of it. There’s a three-second response time from the moment it gathers the data, processes it and present it the user. “It’s completely continuous and effectively real-time,” he said.

Instana took a cue from Google in using a standardized key performance indicator (KPI) model to determine system health. For each of the services, it calculates load, latency, error rate, saturation and number of instances. When there’s a dramatic shift in any of the KPIs, that’s a quality of service issue that triggers an incident alert. When an incident is fired, it collects all the data connected to all the changes related to it.

“There’s no need to manually collect data, build dashboards and try to visually correlate data — it’s all right there for you, ready to go,” Bruschini said. 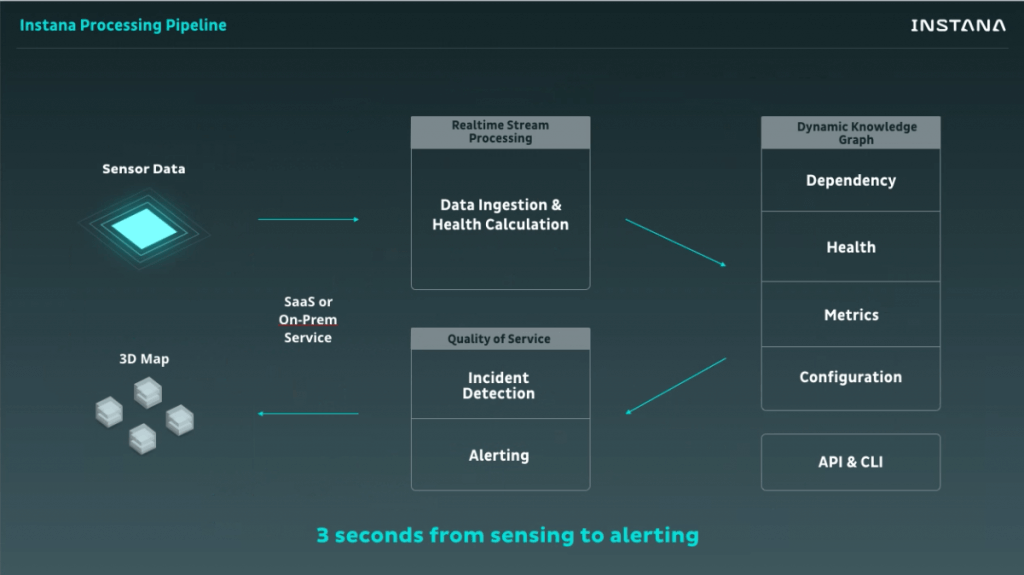 Its Timeshift feature allows you to go back in time to investigate in detail even complex situations.

“If you want to go back and look at problems with a service request if you do sampling — if you look at 10 percent or 20 percent of requests — most likely you don’t have what you’re looking for. … So that’s why we developed a way to trace every single call running through your application so you can go back in time and figure out exactly what happened. From the trace you can directly see the code” Bruschini said. 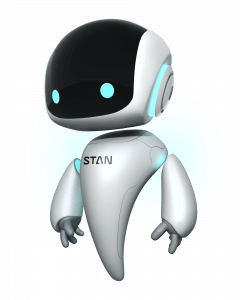 To help users, the company came up with the virtual assistant Stan, an artificial intelligence robot that never stops learning about your environment, can add insight into issues and make suggestions.

Based on the notion that most application performance management (APM) tools require highly qualified experts to understand the data these tools generate, the company built Stan to help sift through hundreds of metrics across thousands of servers, direct you to the exact problem and suggest appropriate actions to take.

“We’re trying to not go all Clippy on this,” Abrams said but added that Stan brings unique capabilities to the task.

Stan works with the traditional LAMP (Linux, Apache, MySQL, and PHP/Python/Perl) stack and three-Tier Java/RDBMS architectures, as well as newer ones including Spark, Akka, and Kafka.

A spin-off from German IT consulting firm Codecentric , Instana was founded in April 2015. It recently opened business headquarters in San Mateo, Calif., but maintains engineering headquarters in Solingen, Germany.

It raised a $6 million Series A in June led by venture capital firm Target Partners.

“The Instana team has consistently impressed us with their understanding of the demands of application performance monitoring and their vision for where this industry is headed,” said Berthold von Freyberg, partner at Target Partners.

The IT performance management market is worth $2.6 billion, growing by 15.8 percent per year, according to Gartner, and is heating up with a number of new entrants including Sysdig, SignalFX, Sensu, Nagios.