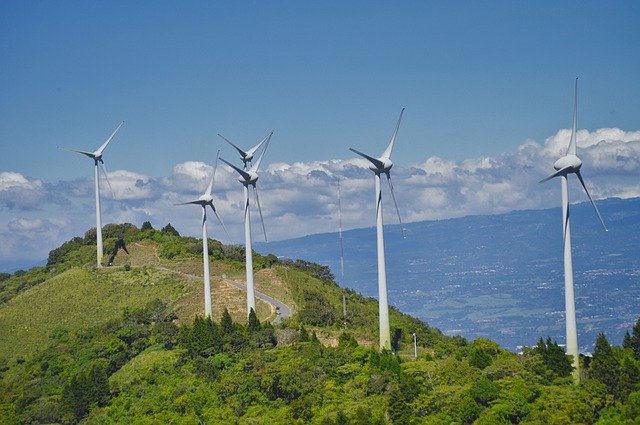 As industrial Internet-of-Things (IIoT) applications produce a blinding amount of data 24/7, relational and key- value-based databases struggle to keep up.

It’s a problem the team at the Tsinghua University School of Software has been working on for going on a decade. The result is IoTDB, which recently graduated from the Apache Software Foundation incubator to become a top-level project.

It reached this status “at a time of confluence of database, Internet-of-Things (IoT) and AI technologies in conjunction with a wider adoption of Industry 4.0 and automation approaches to further enable remote work and increased efficiencies,” said C. Mohan, retired IBM Fellow, former chief scientist at IBM India, and a member of the US National Academy of Engineering.

As a Distinguished Visiting Professor working with the team, “I have seen this project reach maturity and build up a vibrant open source community around it,” he said.

As a PhD student at the Chinese university starting around 2012, Xiangdong Huang, now vice president of the Apache project, was assigned to manage the time-series data being generated by the minute by a large company’s 200,000 machines. Reading the data from Oracle quickly proved to be too slow and buying a more advanced license too expensive.

They decided to try NoSQL — Cassandra — but ran into performance problems with it as well.

“Apache Cassandra is good, and we used five nodes to manage all the data,” he said, explaining, “The user may create more than 5,000 tables in Cassandra, and they do not want to buy more servers to form a larger cluster (as the budget is limited). From then on, I spent about two years to read the source code of Cassandra, and did some modifications on Cassandra, and spent a lot of effort to use the limited server resources to provide better performance, which made us tired. … Even [though] we spent a lot of effort, we find it hard to use five nodes to reach 10 million data points written per second.”

They tried saving a packet of hundreds of data points to Cassandra as key-value pairs. But that meant maintaining everything themselves and still ran into performance issues and limitations with the data structure.

They then decided to create a time-series database from scratch. Professor Jianmin Wang came up with the idea of donating the project to ASF in 2018 as a way to get more people involved.

As a time-series database for industrial IoT, the project provides storage for massive datasets, high throughput data input and complex data analysis. It’s a lightweight structure, high performance and usable features can be easily integrated with other projects such as PLC4X, Hadoop, Hive, Spark and Flink.

“When IoT is used in industrial applications, intelligent equipment usually produces one to two orders of magnitude more data than consumer-oriented IoT devices,” the oTDB developers wrote in a research paper. “This makes it even harder for analytics to produce valuable insights in a reasonable amount of time.”

The metadata management module uses a tree structure to manage the naming space of devices. IoTDB stores data in an open native time-series file format for both database access with query/storage engine and Hadoop/Spark access against a single copy of the data. 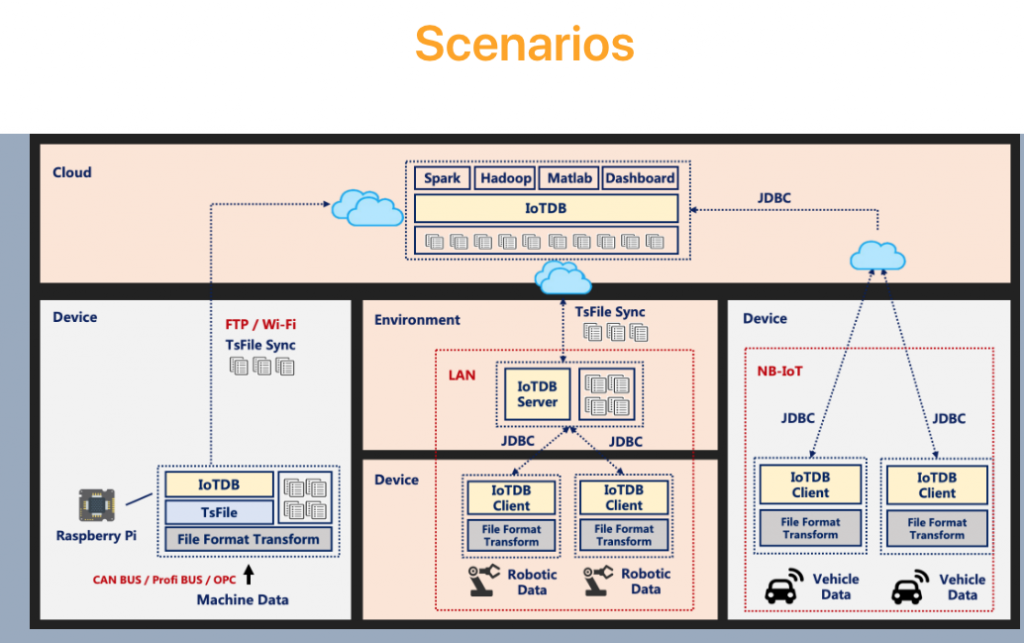 As a distributed time-series database, where data is partitioned by grouping time-series in Cluster Engine among different nodes while time-based data slicing is implemented on each node to improve the performance. IoTDB provides an SQL-like language, native API, and restful API to access the data.

In IoT scenario, edge computing and cloud side deployment are equally important, according to Xiangdong.

“Typically, IoT devices collect data from sensors and industrial controllers and send data to the data center using customized or standard protocols like MQTT in real-time. However, in some cases, the edge intelligence requires real-time analytics, such as fault alerts, to retrieve data from a local data store,” he said.

“IoTDB has a lightweight, embedded version to be deployed on the IoT devices, where the minimal runtime memory requirement is 32MB and computation is supported with an ARM7 processor. Local storage is also mandatory to prevent data loss in case of the temporary network outage. In this scenario, TsFile Lib allows the devices to persist data in TsFile format, and afterwards the generated TsFiles can be directly synchronized and merged with active IoTDB instance on the cloud using the File Sync module.” 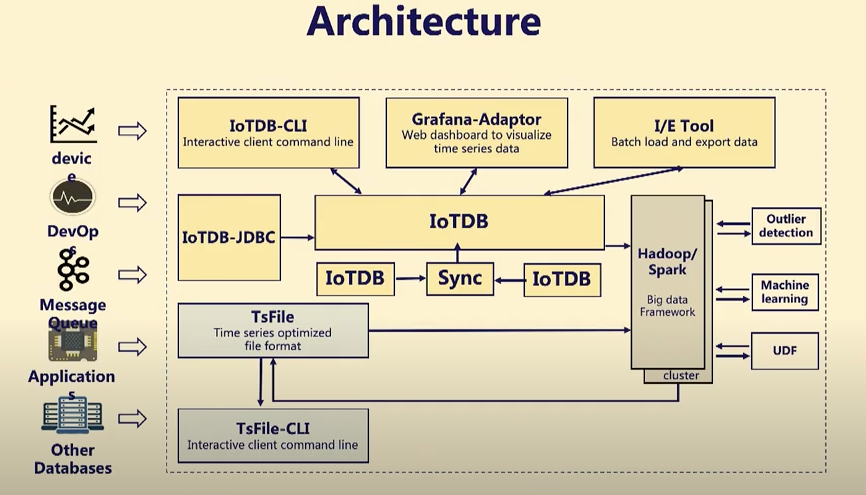 In the cloud, using the Cluster Engine, a Raft-based protocol is used to manage multiple IoTDB nodes. In the cluster mode, data partitions can be defined according to both time slice and time-series ID. The distribution of data and query operations are completely transparent to the end users, he said.

IoTDB is designed for managing data in IoT devices, while other time-series databases usually have been designed for DevOps, he said. IoTDB is more lightweight, as it does not depend on other systems such as a RDBMS or a NoSQL database.

The write throughput of IoTDB reaches tens of million points per second.

“Apache IoTDB is a perfect fit for edge computing,” said Julian Feinauer, CEO at German startup pragmatic industries GmbH, “The high compression helps to use the [limited] amount of memory we have very efficiently. IoTDB is a perfect fit, especially in IIoT use cases, where network and compute capabilities are limited on the edge.”

A comparison with competitors InfluxDB, TimeScale and others can be found here.

Since joining the Apache Incubator, IoTDB has attracted users from all over the world. Steel and mining venture ArcelorMittal Americas uses it for sensor data. It was attracted to the project for its ability to integrate with systems such as Spark, Grafana and NiFi, he said.

The team is working with the Chinese Meteorological Administration to build the next-generation big data platform. China has 150,000 meteorological stations, each collecting more than 100 metrics that are reported to the data center every five minutes.

Going forward, since IoTDB is trying to serve the edge as well as the cloud and sync data between the two, it will be implementing C++ and Go data file APIs for easier use on the edge.

To improve performance and stability, the team is implementing a better data compaction module and a robust memory control strategy.

“IoTDB will be more and more open,” Xiangdong said. It will support UDF, trigger, secondary index soon. We will integrate it with other open source systems, such as Apache Calcite.

“Then you can use IoTDB to do many interesting things, like outlier data alert, data calculation, similarity search and use standard SQL to operate the data,” he said. 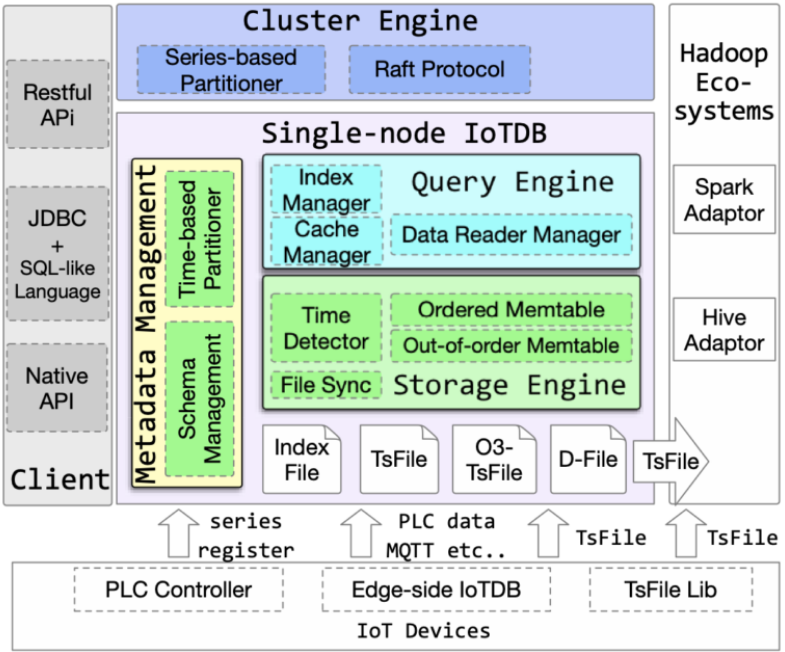 Susan Hall is the Sponsor Editor for The New Stack. Her job is to help sponsors attain the widest readership possible for their contributed content. She has written for The New Stack since its early days, as well as sites...
Read more from Susan Hall
SHARE THIS STORY
RELATED STORIES
Is the Answer to Your Data Science Needs Inside Your IT Team?  Let SQL Do All the Work: User Defined Functions Data, Analytics and AI: What Will Happen in 2023 Enterprise Blockchain Is Doomed Presto: Data Analytics on an Open All-SQL Platform
SHARE THIS STORY
RELATED STORIES
Enterprise Blockchain Is Doomed One Technology That Makes Renewable Energy More Efficient Machine Learning Is as Easy as an API, Says Hugging Face Hybrid Data Collection from the IoT Edge with MQTT and Kafka Bit.io Offers Serverless Postgres to Make Data Sharing Easy
THE NEW STACK UPDATE A newsletter digest of the week’s most important stories & analyses.
The New stack does not sell your information or share it with unaffiliated third parties. By continuing, you agree to our Terms of Use and Privacy Policy.