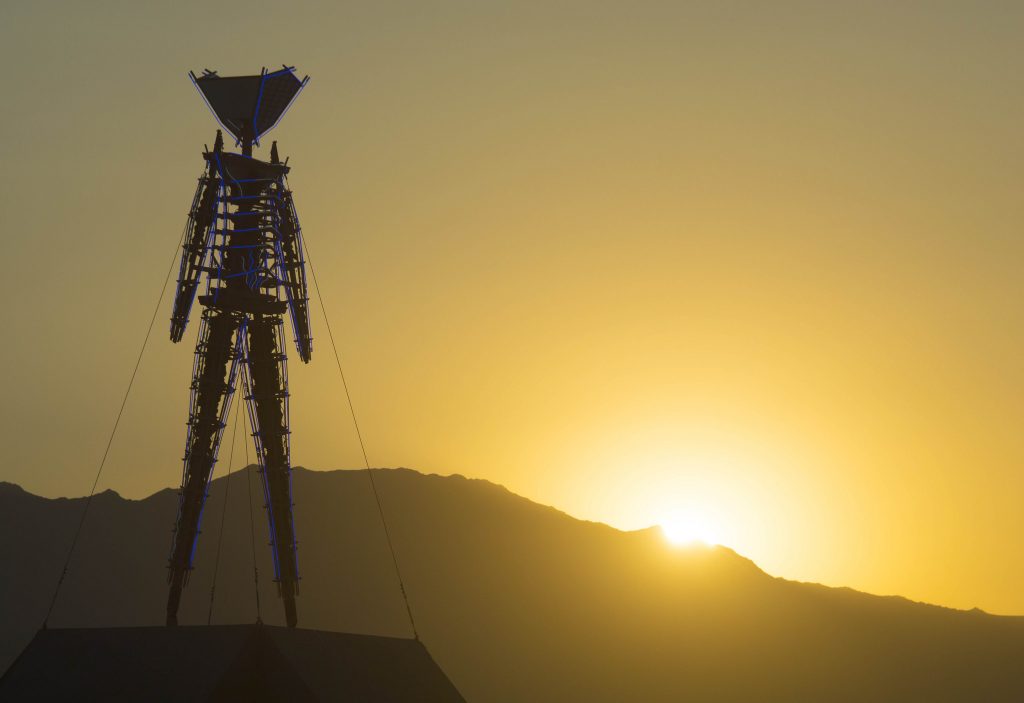 As gorgeous photos from this year’s Burning Man festival flood our social media feeds, way-weary burners may start to ask what it all had meant and if the annual festival holds some greater significance for the larger tech community. Fortunately, several thinkers have already come up with some interesting answers.

“It’s often said that Burning Man and the internet grew up together: both started emerging at around the same time in the late 80s, went through a ‘wild wild west’ phase in the 1990s, when they were seen as counter-cultures. Both started to get really big around the turn of the century, and both became a massive cultural phenomenon after that,” wrote Caveat Magister, a member of the official Burning Man Philosophical Center, in a journal article, “Is Burning Man an Open-Source Cloud-Based Culture?”

“Many of the people who made the internet what it is, went to Burning Man — and both imply new forms of social organizing.”

Sunrise with 70,000 of my closest friends. #burningman pic.twitter.com/jAzKtVPaFV

In a podcast by Burning Man’s Philosophical Center, Magister interviews Anselm Engle, a member of Burning Man’s IT team who argues that Burning Man continues to parallel the evolution of information technology itself, right up to the technologies of today. Magister summarizes Engle’s theory of a deeper similarity: “Both Burning Man and the internet were born out of the same social forces and cultural movements, and thus have been moving in parallel — one emphasizing pure information, the other grounding us firmly in the immediate physical moment, but both still riding the crest of the same wave.”

“Which is why he thinks Burning Man can be described as an open-source, cloud-based, culture,” he said.

After all, Burning Man’s creative community can be seen as a massive nexus of scattered individuals, who throughout the year exist in their separate environments, intermittently running local instances of a larger central event… And Engle explains on the podcast that each of these local subcultures is optimized for specific features — like so many different builds of Linux.

Stanford Communications professor Fred Turner also sees a parallel between Burning Man and the culture of the internet — with high early ideals confronting the realities of mass adoption. But his more specific argument is that experiences at Burning Man end up incorporated into the work culture of thousands of Silicon Valley attendees, he argued in a 2009 paper, “Burning Man at Google: a cultural infrastructure for new media production.”

Turner became interested in the topic after seeing an installation of Burning Man photos at Google headquarters, since “I’ve found over the years that what companies put in their lobbies tends to say a lot about what kind of company they hope to be,” Turner says in a new interview with Stanford News. His paper delves into what he describes as the “ongoing transformation of white-collar labor.”

“For companies ranging from Cisco to Razorfish, the cultivation of the corporate workspace as a home-away-from-home, of the high-tech worker as a playful, emotionally integrated hipster and the corporate team as a cross between a family and a rock band became commonplace.”

Turner notes that while Google lets its employees spend 20 percent of their time on personal projects, its managers have also “promulgated relentlessly an ethos of benevolent peer production among them.” There are open email lists and databases of ideas, as well as collaboration-optimized meeting spaces — a philosophy which even recurs in the way Google invites the wider community of internet users to beta-test their software. In fact, there are so many cultural similarities that Burning Man could be seen as an idealized version of Silicon Valley, one where all the dreams of a career in tech finally come true.

“Not unlike the meeting rooms or email lists of Google, the desert floor of Burning Man renders participants highly visible. This, in turn, allows them to transform their projects into temporary celebrity…. [A]t Burning Man, they can engage in many of the same practices that drive software engineering, they can acknowledge the failure of those practices to live up to marketers’ and managers’ claims in the day-to-day factory, and at the same time they can replace that failure with a lived experience of the ideal itself: the making of multimedia products which, on the playa at least, can be shown to be changing the world.”

What I was working on the past few monthshttps://t.co/tgbXidRVCb#burningman2018 #burningman pic.twitter.com/WOKyxzlPwr

Google News was famously created in 2001 when an employee shared their personal project, a script for crawling news sites and clustering it by topic, an event Turner calls it an example of “commons-based production.” But for one week at Burning Man, everyone has the same opportunity.

And that experience lets them “redeem the failures” of the marketplace, according to Turner, in a ritual space “in which the same sorts of engineering projects that organize participants’ work lives in the everyday, secular world induce feelings of effervescent, even sacred, community. In the process, it suggests to its participants that engineering can remake the world for the better.

The Man now stands in Black Rock City. Shalaco shows us how it all gets done. https://t.co/pSXwp7Tlrp

“For contemporary information workers, that belief alone has substantial value.” He cites his interview with a Google interface designer who said “We need to hang on to the idea that we are here to make the world a better place. If we don’t keep that in mind, then we don’t have anything but the bottom line to come to work for.”

There’s definitely some cross-pollination happening — though no one’s exactly sure what it is. TechCrunch’s Jon Evans notes that Mark Zuckerberg once “choppered in and spent an afternoon giving away grilled cheese sandwiches,” while Elon Musk “dismissed the TV show Silicon Valley because it didn’t reflect the side of the Valley he saw at Burning Man.” Turner lists more famous tech titans who attended Burning Man — including Jeff Bezos, EFF co-founder John Gilmore, and of course, Sergey Brin and Larry Page of Google.

But the influence doesn’t end there. “I’ve seen Burning Man-like language infused in corporate statements, where tech workers are often described as ‘entrepreneurial team members’ who work ‘intensely and ecstatically’ on building something that will ‘change the world,'” Turner tells Stanford News.

The highlight of this years #BurningMan for me was hanging out with the oldest and coolest Burner ever, 92 year old Fleur Bresler! https://t.co/7mVKOFUaq8

Turner also cites an even greater impact of the festival, drawn from interviews with tech workers from Silicon Valley who’d built sophisticated camps and tech-oriented artworks. “They describe the process as being something like product development — intense, high stakes, deadline-driven, hard. At their day jobs, they are usually laboring to bring to life somebody else’s vision. But at Burning Man, they experience the kind of flow that is supposed to accompany engineering in the Valley on behalf of their own work. What they make in turn is high visible: Everybody sees everything on the playa, and celebrates what they like.”

“In this way, Burning Man models the kind of project-centered, team-oriented manufacturing practices that drive Silicon Valley and at the same time reconfigures them as a collective spiritual exercise.”

A lot of what’s happening now is the stuff that bubbles below the surface of Black Rock City. It’s the lava beginning to move as it makes its way to the surface, before the big explosion of art and people. In just a week, the city has begun to take shape. https://t.co/iVPt9coBUD

“In 2001, Larry and Sergey chose Eric Schmidt as Google’s CEO in part because he was the only candidate who had been to Burning Man,” TechCrunch’s Evans notes.  But he seems unconvinced, writing during the festival that Burning Man is “sometimes, very weirdly, misinterpreted as some kind of holiday-hackathon extension of Silicon Valley…” He noted that the list of events this year included a so-called ‘VC/entrepreneur networking event and pitch session — adding that a friend who attended reported “many people were genuinely crestfallen when they realized it was a joke.”

But you have to admit that several projects embodied some truly impressive feats of collaborative technology.

Someone even commissioned post-graduate students at Purdue University to build an 80-foot-tall flamethrower that spits 100-foot flames into the air. The contrapation — which ejects liquid propane — took over six months to build, and its creators now plan to take it to more events in the future..

Elsewhere on the playa lurked a giant flame-breathing robot…

Our CEO Alan at Burning Man where this years theme was ”I, Robot”. PS! The creature in this video is not Alan. #burningman2018 #BurningMan pic.twitter.com/WdV7ULrobd

Reportedly a Cisco engineer helped build the Hexatron, a 90-foot wide forest of 468 LED light poles — each one 20 feet tall and controlled by a computer.

And of course, there was a swarm of over 600 drones.

But whatever its greatest significance for the larger world of technology, 70,000 people collectively transformed an empty space in the desert into something greater — a communal experiment in fun and fellowship.

And it looks like they all had a blast.

Meet @rawblane. One of the most genuine fun-loving human beings on this fine earth. If you are lucky enough to see him you can bet you’re at one of the best parties on earth because if he is there- it is. #burningman https://t.co/FtYqV2FQzw pic.twitter.com/pNiCiuZpEZ