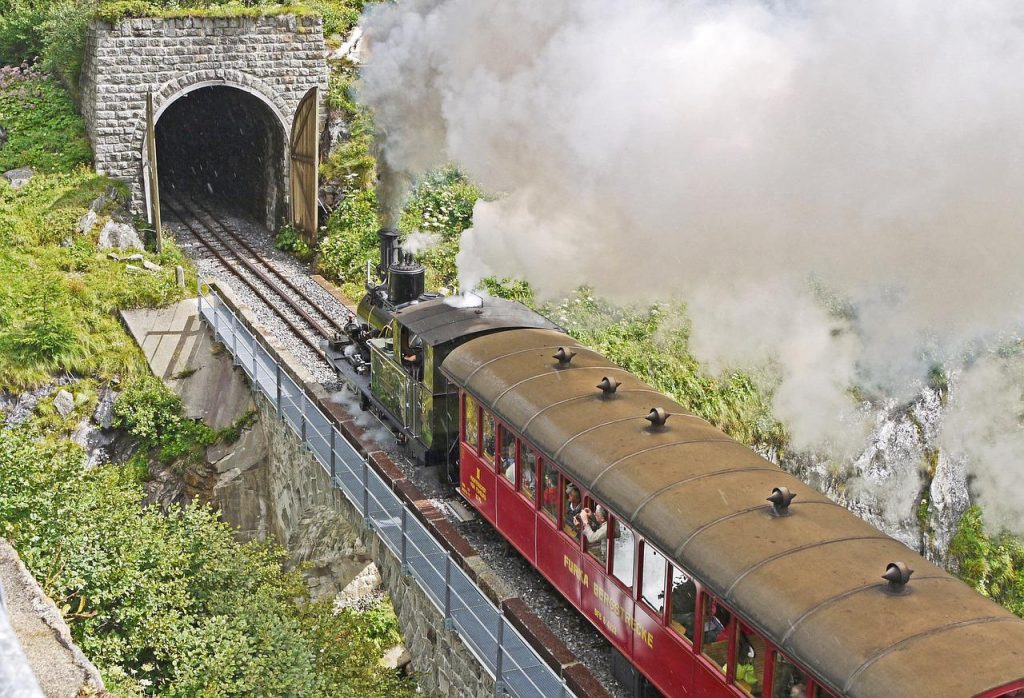 Have you ever bought a car you thought was somewhat unique but then you begin seeing that car’s make, model and color everywhere? This is called the Baader-Meinhof phenomenon, or frequency illusion, and it is a cognitive bias that affects our perception of frequency.

We tend to overestimate the number of times we’ve seen or heard something because it’s been on our mind recently.

This bias can be helpful sometimes, such as when trying to remember someone’s name or where we left our keys. However, it can also lead us astray, such as when we think we’ve seen or heard something more frequently than we have.

Is Kubernetes Really Eating the Cloud?

Why do I bring up Baader-Meinhof with regards to Kubernetes? Because as a developer of Kubernetes-based software at TriggerMesh, I thought “everyone” was using Kubernetes. However, in my day-to-day business, I find that a limited number of users knowingly use Kubernetes than I was led to believe. I have been wondering if I am falling prey to the Baader-Meinhof phenomenon or if there is another explanation.

Kubernetes was created by Google in 2014 and donated to the Cloud Native Computing Foundation in 2015. It has become the standard for running containers in production at scale. Since then, by most accounts, it’s become a runaway success.

However, when I looked at Kubernetes search trends on Google, I was surprised to see that the worldwide search volume has declined over the last two years. I wondered whether search volume is a good proxy for usage or whether the numbers don’t tell the whole story since a smaller number of developers and cloud native engineers can deploy systems for a more significant number of users due to scalability and embedding it in other systems.

I also looked at the challenges for adopting Kubernetes and, as Clyde Seepersad, general manager of training at the Linux Foundation, notes in a TNS post, you can’t hire your way out of the cloud skills shortage. According to the Canonical Kubernetes and cloud native operations report for 2022, lack of in-house skills is at the top of the list when migrating to or using Kubernetes. 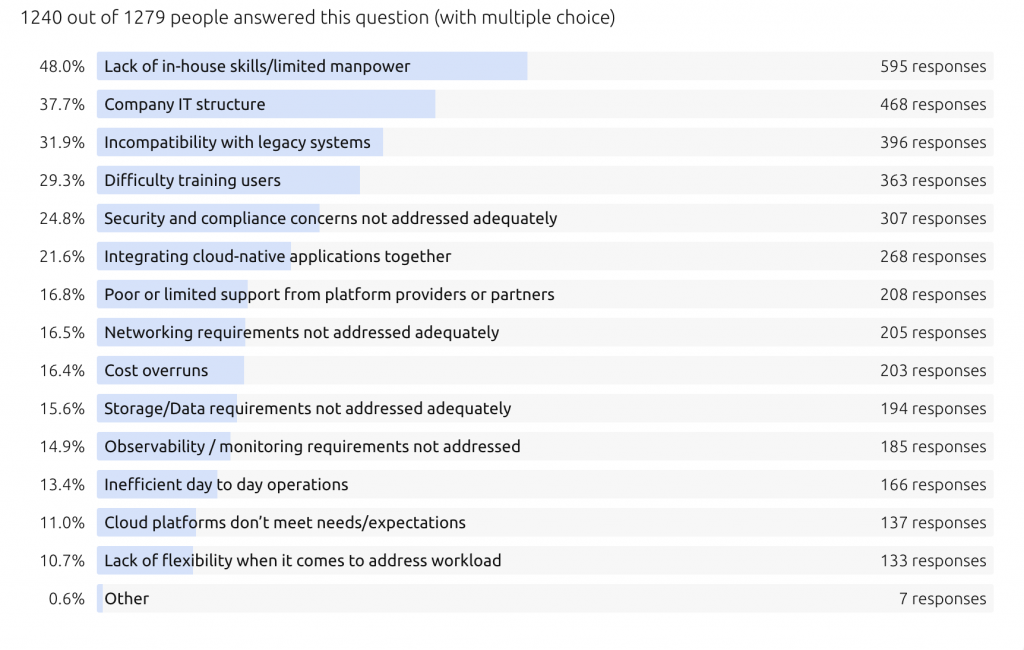 According to CNCF’s 2021 Annual Survey, 96% of organizations are either using or evaluating Kubernetes, a record high since CNCF started the annual survey in 2016. In regional adoption of Kubernetes in production, emerging technology hub Africa (73%) is jumping ahead of other more-established tech centers, including Europe (69%) and North America (55%). Additionally, 93% of respondents are currently using or planning to use containers in production, echoing 92% in the 2020 survey.

I suspect that because the CNCF sample is targeted to cloud native users, it’s a bit skewed, but it’s still a very large sample and provides good data.

Is Serverless the Path to Massive Kubernetes Adoption?

Recently, I wrote about the path from COBOL to cloud native. One takeaway from my research was that mainframes still play a massive part in our lives despite the vast majority of us never seeing the underlying architecture. As a refresher, mainframes are pervasive in the financial industry, with 96 of the world’s largest 100 banks, nine out of 10 of the world’s largest insurance companies, 23 of the 25 largest retailers in the United States and 71% of the Fortune 500 companies using mainframes. However, I’d say that many people using mainframe services are unaware of the underlying infrastructure.

This makes me wonder if Kubernetes is still growing rapidly. But it’s becoming part of the underlying fabric for clouds and services that aren’t exposing the complexities of Kubernetes, not unlike the mainframe.

Perhaps the continued adoption of serverless computing is part of this underlying trend of Kubernetes adoption, though under the covers. Earlier this year, I pondered in a post, “Is Serverless Just a Stopover for Event-Driven Architecture,” that maybe I missed an even more current trend — that Kubernetes may be a stopover on the way to serverless.

Datadog recently published its Datadog State of Serverless Report, which shows adoption of serverless is growing at a considerable rate. Also, much of that serverless adoption comes on top of Kubernetes.

As far as serverless goes, the most prominent platform is Amazon Web Services‘ Lambda, but it doesn’t run Kubernetes under the covers. It runs on a micro VM architecture, and the open source implementation shows that it doesn’t use Kubernetes but provides similar functionality. However, most other serverless vendors are basing their serverless offerings on Kubernetes. 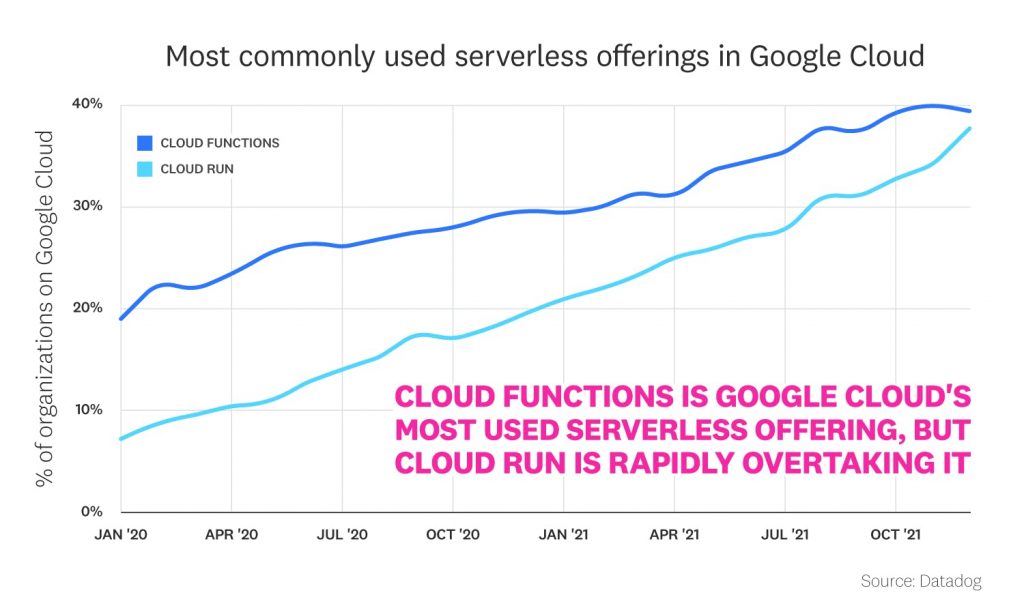 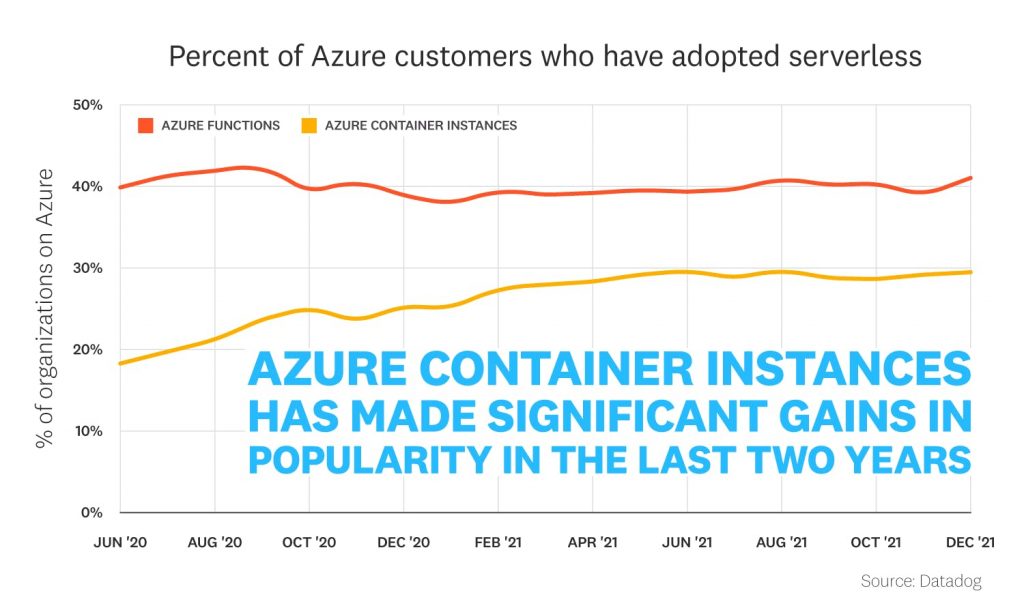 Many organizations have containerized applications for Kubernetes, but others deploy containers directly to serverless cloud services. Serverless is an ephemeral container that can scale up and then scale to zero. Maybe this serverless growth is partly due to the adoption of containers and Kubernetes. 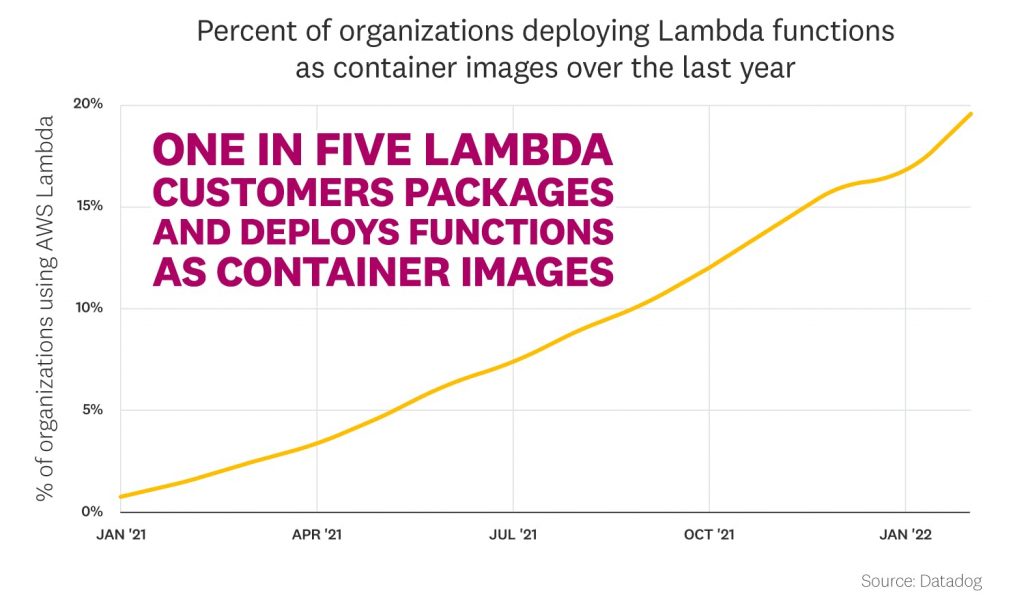 Kubernetes adoption is still growing, with 96% of organizations using or evaluating Kubernetes. Despite this high adoption rate, there are some challenges to Kubernetes adoption, including a lack of in-house skills. Kubernetes is also becoming more embedded in other systems, so its adoption may not be as visible as it once was. Serverless computing is one area where Kubernetes is being adopted under the covers, and this trend is likely to continue. So perhaps that’s the true sign of success — when, like Linux, more people use the technology than ever before, but easier-to-use, developer-friendly abstractions are abstracting it.

Amazon Web Services, The Cloud Native Computing Foundation and the Linux Foundation are sponsors of The New Stack.