Iter8 enables you to rapidly launch gRPC benchmarking and validation experiments, and configure the service-level objectives used for validation.
Mar 8th, 2022 7:25am by Srinivasan Parthasarathy 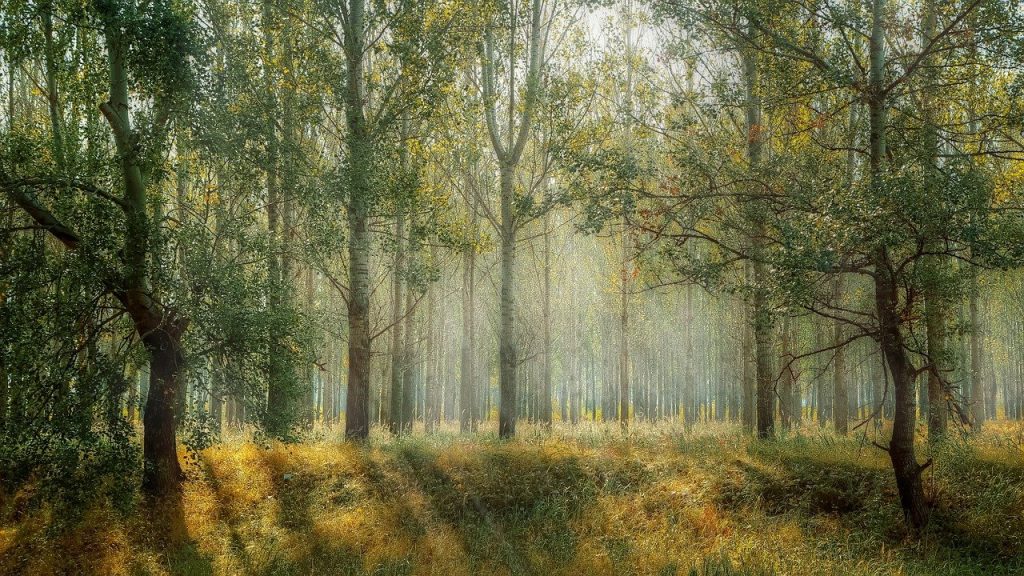 gRPC is an open source remote procedure call (RPC) system that is becoming increasingly popular for connecting microservices and connecting mobile/web clients to backend services. Benchmarking and performance validation is an essential building block in the continuous integration and delivery (CI/CD) of robust gRPC services.

In this hands-on article, we show how Iter8 enables you to rapidly launch gRPC benchmarking and validation experiments, and configure the service-level objectives (SLOs) used to validate the gRPC service, the load profile used for benchmarking, and the data and metadata supplied as part of the call requests, all in a matter of seconds. We also discuss how Iter8 unifies performance validation for HTTP and gRPC services.

Iter8 is the open source Kubernetes release optimizer built for DevOps, MLOps, site reliability engineers (SRE) and data science teams. Iter8 introduces a primitive called “Experiment” that makes it simple to collect performance and business metrics, assess, compare and validate multiple app/machine learning model versions, and safely promote the winning version of the app/ML model. To enable easy reuse, Iter8 experiments are packaged and released in the form of experiment charts, which are Helm charts with a specific structure. For example, the load-test-grpc experiment enables benchmarking and performance validation for gRPC services. This experiment is the main focus of this article and is illustrated below. 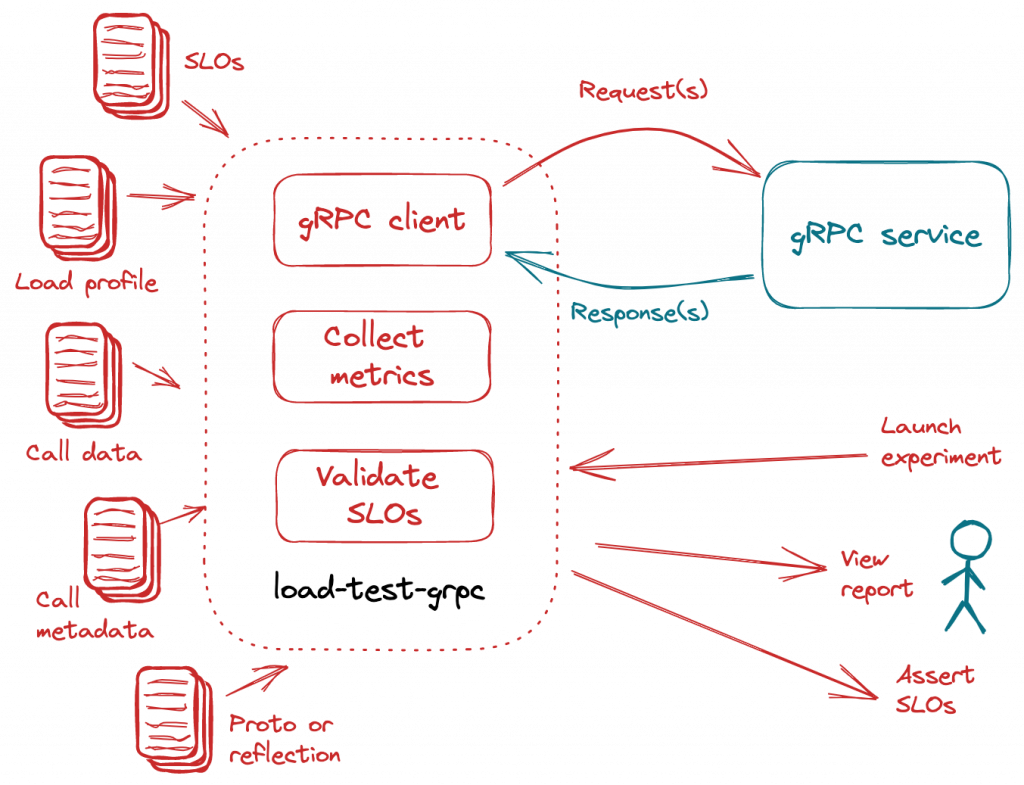 Iter8 is packed with powerful features that simultaneously enhance and simplify your release engineering/CI/CD workflows. We highlight three of them below.

Get started with gRPC benchmarking and validation by installing the Iter8 CLI.

Alternatively, you can also use prebuilt binaries for various platforms, or Go 1.17+ for Iter8 CLI installation.

Run the sample gRPC service in a separate terminal.

The iter8 report subcommand generates a report of an experiment in HTML or text formats. Generate an HTML report and open report.html using a browser.

The experiment report looks as follows. 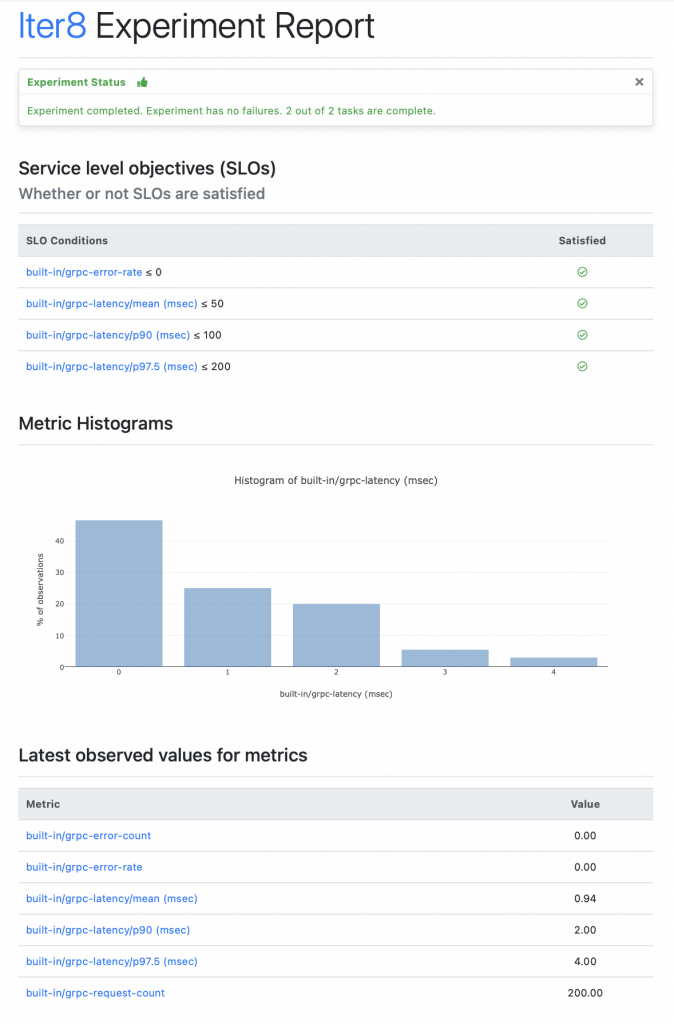 The ability to collect built-in latency and error-related metrics, and automatically validate SLOs, is one of the powerful features of Iter8. Modify the iter8 launch command used above by configuring the following additional parameters.

The above configuration validates that the app satisfies the following SLOs.

Generate and view the experiment report, which now contains SLO assessments in addition to metric values.

Use the iter8 assert subcommand to check whether the experiment completed without failures and if all the SLOs are satisfied. This command will exit with code 0 if the assert conditions are satisfied and with code 1 otherwise. Assertions are especially useful within CI/CD/GitOps pipelines.

The load-test-grpc chart supports a number of advanced parameters in addition to those illustrated in the basic examples above. You can use these parameters to supply call data information in the form of JSON or binary files that may be local, or hosted at a remote URL; supply call metadata information at the command line, or as JSON input as a local file or a remote file hosted at a URL; supply proto files or precompiled protoset files or have Iter8 attempt to use server reflection in their absence, and use client streaming, server streaming or bidirectional streaming call patterns.

To learn more about all of the above extensions and other Iter8 capabilities, please visit https://iter8.tools.

For performance validation of HTTP services, Iter8 provides the load-test-http chart, which is illustrated below. 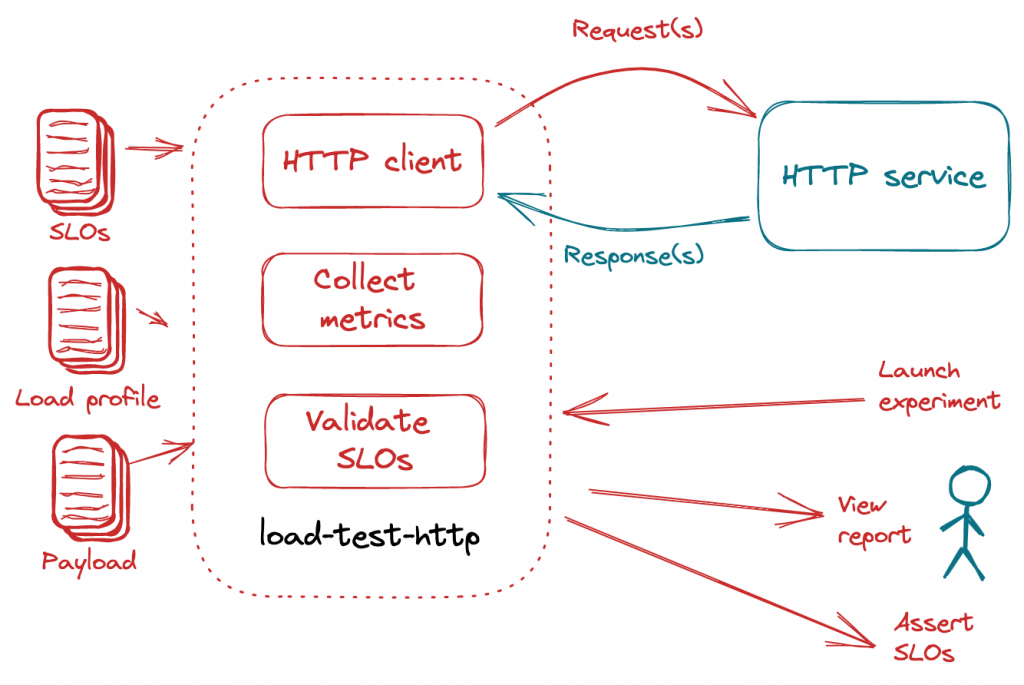 Try the load-test-http experiment as follows.

Benchmarking and validating SLOs is an agile practice that enables DevOps engineers to deliver applications at a high frequency, along with the confidence that they will not compromise the end-user experience in the process. A simple no-code CLI-driven solution for benchmarking and SLO validation that supports both gRPC and HTTP in a unified manner, with flexible specification of SLOs, load profile, data and metadata, goes a long way toward simplifying the application delivery process and freeing up the DevOps engineer for other business-critical tasks.