Jamstack vs. WordPress, Round 2: The Two Matts Debate 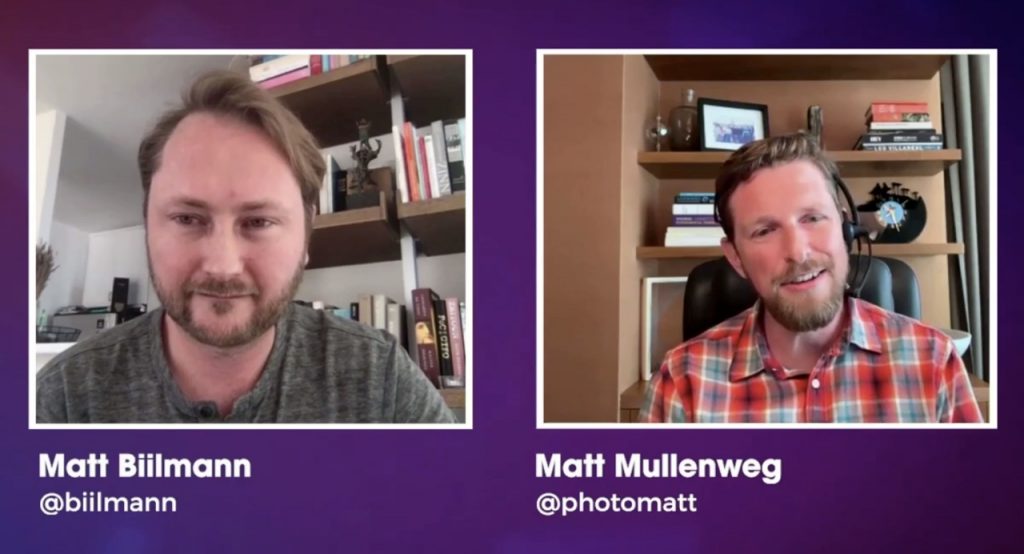 Just over a month ago, I published the first public comments by WordPress co-founder Matt Mullenweg about Jamstack, the emerging web publishing architecture that represents a direct challenge to WordPress (and, more generally, the LAMP stack). Mullenweg told me that Jamstack is “a regression for the vast majority of the people adopting it,” which sparked a backlash on Twitter from Jamstack proponents. Predictably, no minds were changed on the battlegrounds of social media. But then, a surprising development: Mullenweg accepted an invitation to participate in Jamstack Conf, a one-day virtual event held by Netlify on Tuesday.

The resulting “fireside chat” with Netlify CEO Matt Biilmann, who had been especially critical of Mullenweg in an open letter, turned out to be…well, fiery.

Before the fireside chat, there had been some chatter online about how the WordPress and Jamstack communities should be collaborating, rather than fighting. Netlify even published a blog post with the headline “There is No Versus.” But as soon as the fireside chat started, it was obvious the two participants saw each other as competitors.

The main point of contention revolved around developers. As I mentioned in my previous column, developers are hugely influential in today’s cloud-driven internet. However, Biilmann claimed that developers are no longer interested in the WordPress ecosystem, which he repeatedly labeled “monolithic.”

“Maybe 10 years ago when I talked to developers, they loved being part of the WordPress ecosystem,” said Biilmann, “[but] today when I talk with developers, it’s very, very rare for me to find the same sentiment.”

He attributed this supposed drop in developer love for WordPress to the “very rapid iteration and innovation going on in the modern frontend ecosystem” — an obvious reference to the Jamstack, but probably also to the emergence over the past decade of innovative JavaScript frameworks like React and Next.js.

“You must be talking to different developers,” Mullenweg fired back. “If you look at the numbers — what people are actually adopting — the integrated approach, which I’ll use instead of monolithic, is winning.”

Mullenweg then claimed that WordPress has been “accelerating its growth for the past few years,” but that Netlify has recently declined. He later clarified on Twitter that he was referring to a survey by BuiltWith of the world’s top content management systems (CMS). There’s no doubt that WordPress is the dominant CMS by this study (and most other surveys, too), and that it continues to grow in market share. However, the decline that he referenced for Netlify is only from July 2020 — before then, there had been several years of growth. 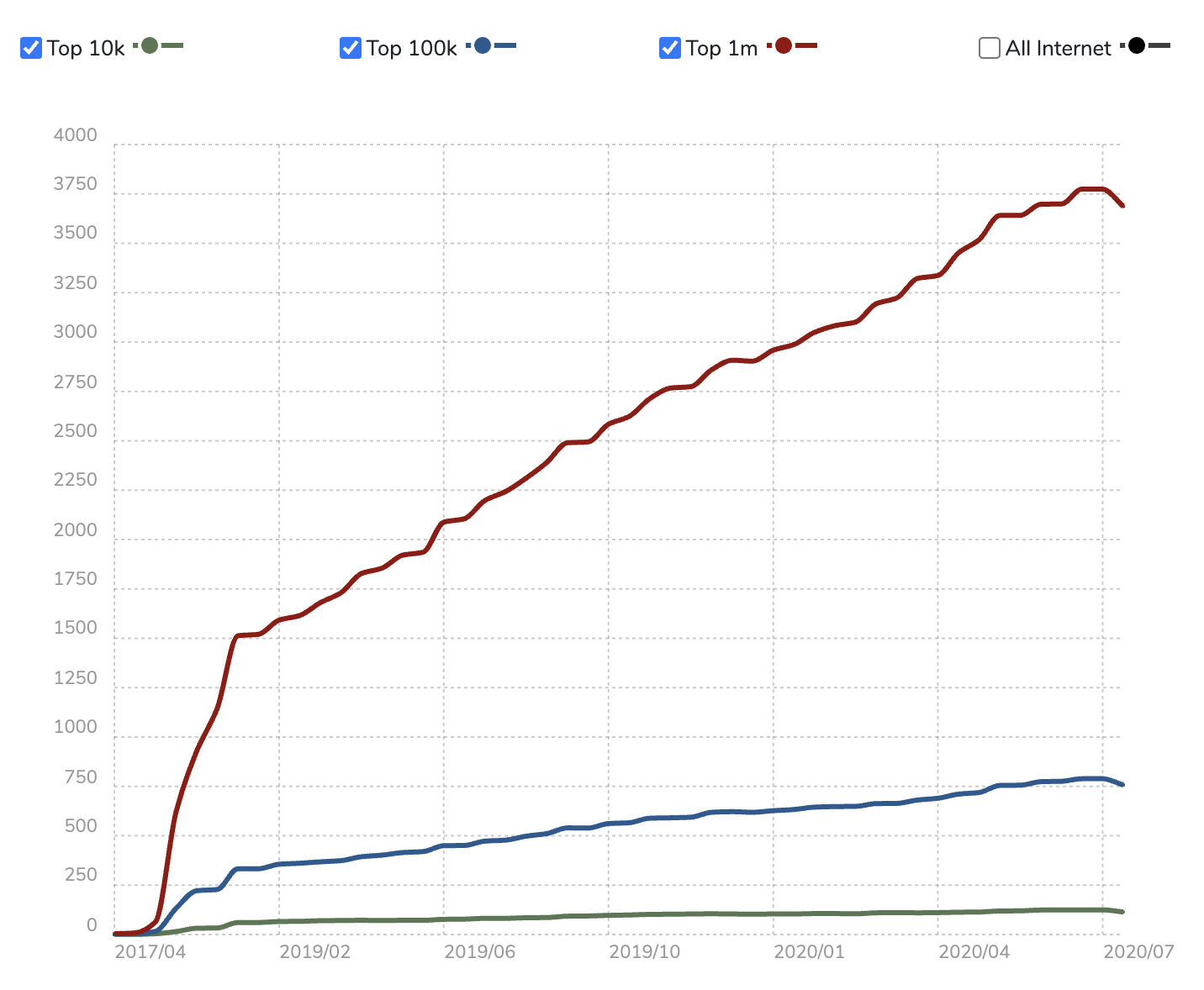 Biilmann emailed me after the debate, to further respond to Mullenweg’s reference to the BuiltWith data.

“He said Netlify usage is declining, which is not true. We don’t typically share these metrics, but our users added more than 481,000 sites in the last 28 days alone.”

Whose Developer Experience Is Better?

By any statistical measure, it’s clear that WordPress is much larger than Netlify currently — both in terms of how many websites are built on it and how many developers it has (the two data points are obviously correlated). But a more interesting question is this: which platform has the better developer experience?

While writing a series of columns about the Jamstack, I soon recognized that this is indeed a web architecture that appeals to developers. Primarily that’s because it separates the frontend from the backend, and there are some amazing frontend tools that Jamstack can take advantage of (like React and GraphQL).

In his email to me after Jamstack Conf, Biilmann contended that the opposite is true for WordPress. “According to the annual survey by Stack Overflow, the largest developer community in the world, 67% of WordPress developers no longer want to use the platform, while React, Vue.js and Angular are the Top 3 most wanted web frameworks,” he wrote.

The survey he’s referring to does indeed have WordPress as “the most dreaded” platform. However, in the fireside chat, Mullenweg pointed out that WordPress taps into many of the same frontend technologies that Jamstack does.

“We have a beautiful REST API, we have a GraphQL API, you can use it de-coupled, there’s things like Frontity that allow you to build WordPress [with] serverless pre-rendering using React. There are so many ways to integrate it.”

Mullenweg then pointed to two WordPress projects, Calypso and Gutenberg, as proof that “we love JavaScript, we love APIs, we love markup.”

Calypso is particularly interesting in this context, because it powers WordPress.com and is described as “a single JavaScript application that relies on the WordPress.com REST API to communicate to the WordPress core.” So Mullenweg has a good point that this is about as modern as it gets in web development.

Gutenberg, the modular editing interface in WordPress, has been more controversial among the WordPress community — but it too was built using JavaScript and React.

While it’s hard to argue against the Stack Overflow community when it comes to their view on developer experience, at least WordPress can’t be accused of ignoring modern web development trends.

Perhaps in reference to the current developer perception of WordPress, Mullenweg admitted later in the discussion that “WordPress does a very poor job in developer marketing.”

Be Skeptical of the Sales Pitch

As the fireside chat came to a close, Biilmann and Mullenweg finally agreed on something: that they’re both striving for an open, independent web. However, Mullenweg couldn’t get past a previous dig — in Biilmann’s open letter — that we’re at “the end of the WordPress era.”

He urged developers to also “think about your end users.”

“Are they going to want to commit to git to deploy, or are you going to introduce a proprietary CMS stack like Contentful? Or do you want to build on something fully open source, from top to bottom, with probably the friendliest user experience out there in modern web development? Well, that is why I think WordPress is being adopted and why I don’t think the era of WordPress is over. I think we’re going to reach over 50% market share in the next few years.”

Biilmann had his own ‘buyer beware’ message to convey.

“As a developer, look at what the other man is trying to sell you — which is not just WordPress as an open source framework, but WordPress.com as a company that really depends on the current monolithic—”

Here Biilmann caught himself and switched to Mullenweg’s preferred terminology.

Biilmann made a final appeal for “a version of the web that’s really driven by open source, but also by a very vibrant ecosystem of lots of different providers for each of these different parts and pieces, that work well together, [that] collaborate well together, that’s going to be better for you as a developer, and it’s going to be better for the web.”

The fireside chat ended, but any talk of collaboration seeming like empty words. The two Matts are still too far apart.

So Which Era Are We in, Then?

My overall impression is that Matt Biilmann earnestly believes that Jamstack products (including his own Netlify) can work in harmony with WordPress going forward. But Matt Mullenweg has yet to be convinced — and with 30-40% of the CMS market, I don’t blame him for being sensitive to an upstart with less than 1% of the market claiming that the WordPress era is over.

Personally, I don’t think the WordPress era is over — far from it, as it continues to grow in market share each year. However, it’s equally clear that developers are curious about Jamstack and so their interest in companies like Netlify and Gatsby is growing too.

Ultimately, both approaches are good for the open web. The real battle is to entice developers away from walled garden platforms like Facebook and the mobile operating system duopoly of Apple and Google. So the more that developers use modern web development tools, like Jamstack and WordPress, the better for the web.

Richard MacManus is a Senior Editor at The New Stack and writes about web and application development trends. Previously he founded ReadWriteWeb in 2003 and built it into one of the world’s most influential technology news sites. From the early...
Read more from Richard MacManus
SHARE THIS STORY
RELATED STORIES
Pro Coders Key to Stopping Citizen Developer Security Breach 2023 Web Tech Check-in: React Performance, PWAs, iOS Browsers What Rust Brings to Frontend and Web Development Google Roadmap: Flutter to Integrate with JavaScript, Wasm Prepping for 2023: What's Ahead for Frontend Developers
TNS owner Insight Partners is an investor in: The New Stack.
SHARE THIS STORY
RELATED STORIES
Why a Twitter Founding Engineer Is Now All-in on Mastodon Learning Storage and Retrieval with a Hash Function Google Brings Rust into Chromium Project Prepping for 2023: What's Ahead for Frontend Developers Netlify Acquires Gatsby, Its Struggling Jamstack Competitor
THE NEW STACK UPDATE A newsletter digest of the week’s most important stories & analyses.
The New stack does not sell your information or share it with unaffiliated third parties. By continuing, you agree to our Terms of Use and Privacy Policy.