Java may not be the most cloud-friendly of languages, but that hasn’t slowed down its usage, according to results from SlashData’s “State of the Developer Nation” report for the third quarter of 2022.

Other languages seeing noteworthy increases in the survey since Q3 2020 include:

The survey reached more than 26,000 participants in 163 countries around the world and was conducted from June through August, according to Slash Data, an analyst of the global developer community. 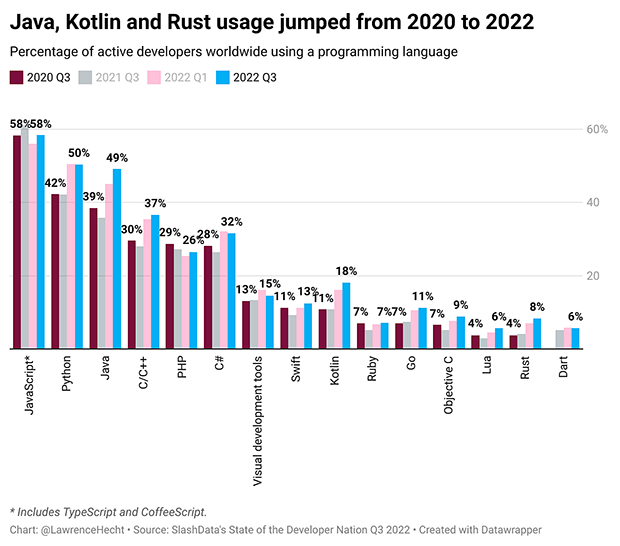 Two other studies confirm Java’s strength. According to Tidelift’s “2022 Open Source Software Supply Chain Survey Report,” 49% of open source developers think their organization relies on Java, up from 42% in 2020.  The report also showed that the largest organizations were more like to rely on Java while the smaller ones tended toward JavaScript.

Financial services organizations are extraordinarily tied to Java. The “State of Open Source in Financial Services” reports that 50% of repositories associated with financial services developers use Java, while only 11% of all GitHub projects use Java. 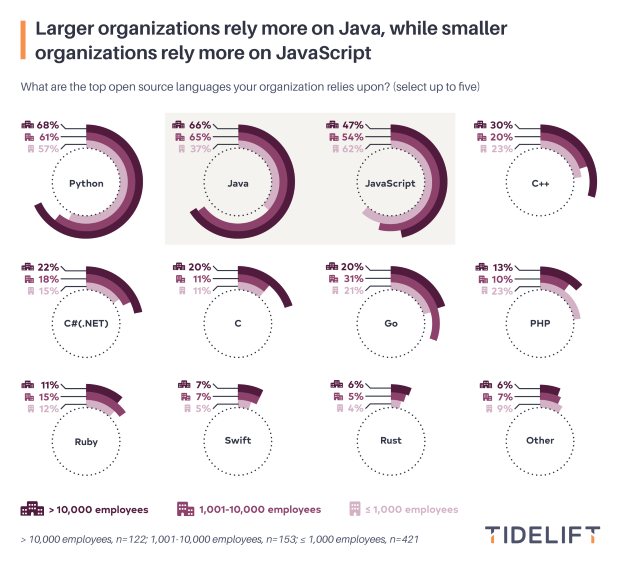 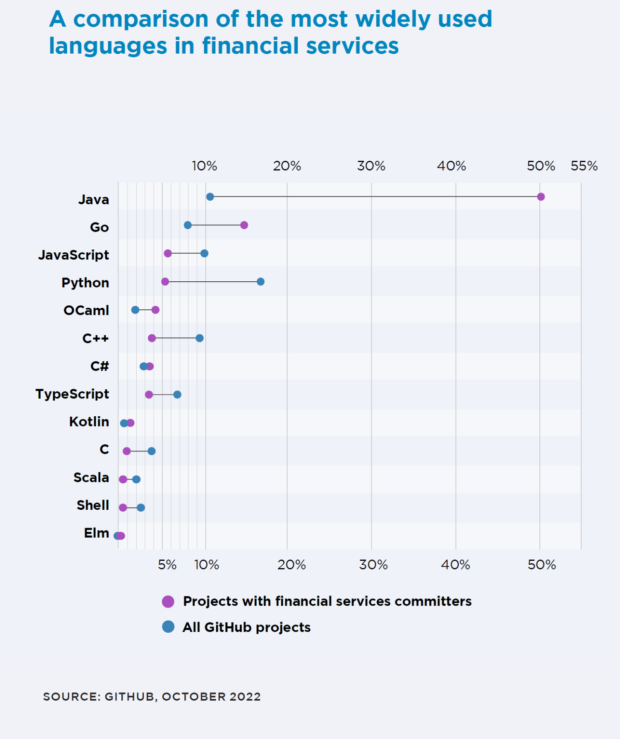 A Dart and Flutter Popularity Check

One language that saw no noticeable increase in usage this year is Dart, which stayed constant at 6% usage over 2021 in the Slash Data study.

At first glance, this seems to contradict the assertion made in The New Stack by Fabrice Bellingard, vice president of product at SonarSource, that there is growing interest in Dart and Flutter for mobile. So, we looked at to Stack Overflow’s annual “Developer Survey” to get a second opinion. It turns out that the developers surveyed by Stack Overflow in 2022 also use Dart at the same 6% level.

Where Dart continues to have buzz is among developers that work on mobile projects, with 27% of the 7,634 mobile developers surveyed by Stack Overflow using the language, up from 24% in the 2021 survey. Among mobile developers, the use of the development framework Flutter rose from 27% in 2021 to 30% in 2022, an 11% increase. However, among all the developers, Flutter usage fell less than a percentage point to 13% as compared over the last year.

Lawrence has generated actionable insights and reports about enterprise IT B2B markets and technology policy issues for almost 25 years. He regularly works with clients to develop and analyze studies about open source ecosystems. In addition to his consulting work,...
Read more from Lawrence E Hecht
SHARE THIS STORY
RELATED STORIES
Why Your Code Sucks: Common Excuses for Bad Programming Learning Storage and Retrieval with a Hash Function How Ray, a Distributed AI Framework, Helps Power ChatGPT State of the API: Monetizing API Deployment Is on the Rise Why a DataOps Team Needs a Database Reliability Engineer
TNS owner Insight Partners is an investor in: The New Stack, SonarSource.
SHARE THIS STORY
RELATED STORIES
Test Gaps Can Lead to Undetected Defects Learning Storage and Retrieval with a Hash Function EBay Explores Chaos Fault Testing at the Application Level Poisoned Lolip0p PyPI Packages MITRE ATT&CK Framework: Discerning a Threat Actor’s Mindset
THE NEW STACK UPDATE A newsletter digest of the week’s most important stories & analyses.
The New stack does not sell your information or share it with unaffiliated third parties. By continuing, you agree to our Terms of Use and Privacy Policy.