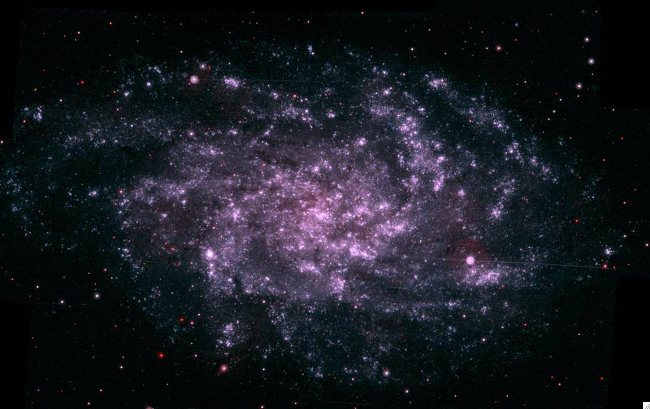 To commemorate JavaScript’s 20th birthday, Michael Rambeau decided to make a little gift for the .JS and front-end engineering world. The Osaka, Japan-based web developer was keen to keep up with the latest developments in JavaScript’s rapidly evolving ecosystem, but tired of bookmarking and jotting down notes about the ever-multiplying smorgasbord of interesting open source projects coming online.

So, Rambeau decided what was needed was a tool to track the constant changes in and additions to the open source JavaScript sphere — and to help developers make informed choices as to the best resources for their projects.

That tool did not exist, so Rambeau built one: bestof.js.org. The web app is based on Rambeau’s idea of using the number of stars a project garners on from users on GitHub as a way to check both current popularity and long-term staying power. After all, an obsolete project can have a boatload of legacy stars that outshine the total better newcomer solutions have yet to accrue. Bestof.js is built to take a daily snapshot of GitHub stars on more than 300 projects, and use that information to demonstrate trends and identify rising-star projects.

The app features two categories: the 20 most popular projects, ranked by the total number of stars on GitHub, and the 20 hottest projects — ranked by the number of stars awarded in the past 24 hours. The results are further broken out into more than 50 categories, from broad (frameworks, testing tools) to narrow (React UI components, game engines).

Bestof.js is well thought out and coherently organized — but even so, it’s still a lot of information. So Rambeau thoughtfully compiled a second gift for the JavaScript world: A year-end round-up of trends throughout 2016. The report, called 2016 JavaScript Rising Stars, is a detailed, by-the-numbers look at which projects are rising stars, and which may be in decline. He tackles a ten-point overview that includes overall most popular projects in 2016, as well as drilling down into various frameworks (node.js, React, front end, testing) and utility projects (compilers, IDE, static site generators). Rambeau also chronicles the major themes of 2016, from what he terms “JavaScript Fatigue™” to LeftPad Gate and Microsoft finally going open source (well, a little, anyway). 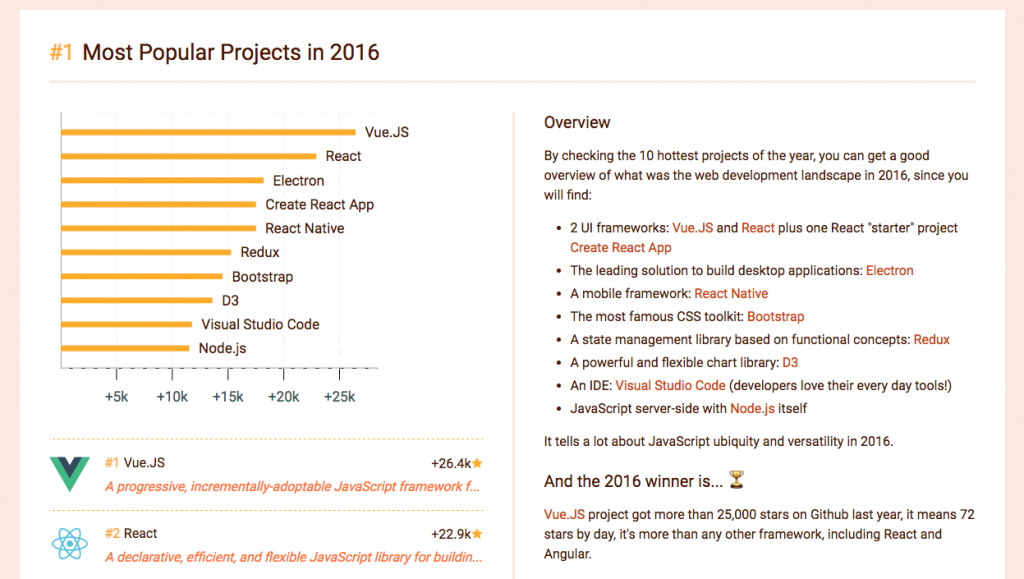 The big winners of 2016?  By the numbers, Vue.js — the progressive, incrementally-adoptable JS framework — was the runaway winner, with 26,400 stars. React garnered three top-ten entries; React itself at number two, with 23,000 stars, and Create React App and React Native at numbers four and five, respectively. The containerization trend showed up at number six, with Redux (15,300 GitHub stars in 2016), and venerable Bootstrap continued chugging along at number 7. Microsoft’s open-source entry project — Visual Studio Code — punched in at number nine. Closing out the top ten is everybody’s favorite little-JS-runtime-engine-that-could, Node.js.

That top ten is strict by-the-numbers GitHub star ratings; nine more breakout categories dig into the details of various web platform-related projects. Rambeau’s accompanying cogent commentary and analysis with each segment shows that he has truly dedicated himself to studying, comprehending, and articulating all these data points for us, his lucky readers.

Rambeau also gives his personal picks for continued success in 2017. Entries include Vue.js — “the momentum will not stop!” — and Create React App, which he used to build Bestof.js itself. He enthuses about Yarn, the package manager given to the open source world by the fine folks at Facebook that seems poised to overtake npm, at least for JavaScript-based enterprise applications.

Rambeau also has nice things to say about the evolution of all things Node.js, from how the latest releases of Node itself jive effectively with ES6 to up-and-coming satellite projects, like the Now hosting solution, render Node.js micro-services a snap to deploy.

JavaScript has come an unbelievably long way from its birth as a means of making static server-generated web pages sing and dance, when, Rambeau says, it was regarded as something of a “toy language.” These days, trying to keep up with the latest developments in JS is like trying to drink from a firehose. Michael Rambeau’s Bestof.js.org is a truly valuable tool in the thinking web developer’s arsenal.