How JFrog’s Artifactory Puts Open Source at the Helm 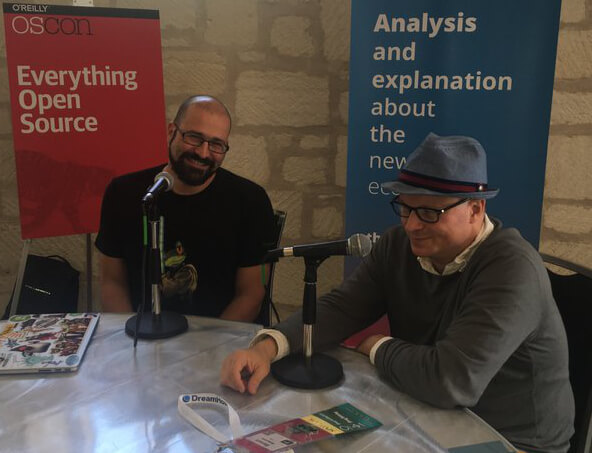 In this episode of The New Stack Makers podcast, we explore how JFrog has put open source at the forefront of its Artifactory repository manager. We hear how Artifactory helps developers get the most out of their Docker containers in a CI/CD pipeline, challenges developers can face when working with containers, and how Java software development helped set the stage for Artifactory’s approach to workflow management. The New Stack founder Alex Williams spoke with Baruch Sadogursky, JFrog developer advocate, during OSCON 2016 for this interview.

How JFrog’s Artifactory Puts Open Source at the Helm

Open source is the cornerstone upon which JFrog’s open source repository management tool Artifactory was created. Sadogursky stated plainly that without the growth of open source, there would have most likely been no Artifactory.

“15 years ago, we already had decent dependency management that allowed people to use open source in their daily development. As it worked back then, it was the norm that those dependencies, those open source libraries were downloaded directly from the internet. Though it made them very, very approachable and increased the use of open source inside an organization, it had its own drawbacks mainly in management and availability aspects of using open source,” said Sadogursky.

Artifactory has both an open source and an enterprise version available to users, with Sadogursky noting that the most popular version of the platform is its open source offering. JFrog also practices what it preaches, with 100 percent of Artifactory’s dependencies available to the open source community for use.  “We stand on those foundations of open source. That is why we exist and it’s what we promote,” Sadogursky noted.

JFrog offers Docker integration for those working with containers in their development workflow for both Artifactory and Jfrog’s Bintray distribution platform, which is particularly useful in CI/CD pipelines. Sadogursky went on to explain that while there are many different ways of working with Docker which all have their own merits. After all, it’s very hard to make a Docker file that will remain stable for a significant period of time.

JFrog ultimately aims to provide Artifactory as an alternative to this laborious and difficult task. Building an image once and using it as a standard by which all other images are held to is something Sadogursky noted is part of its appeal.

“What we make available for developers using Artifactory is the promotion of immutable, stable Docker images which you build once and then you promote across your CI/CD pipeline. Ensuring that what you build, test and stage is the exact same image you run your containers in production from. Though it seems obvious, it’s not that easy to achieve,” he said.