Jigsaw puzzles have turned out to be a big draw in the time of self-isolation.
Apr 19th, 2020 6:00am by David Cassel 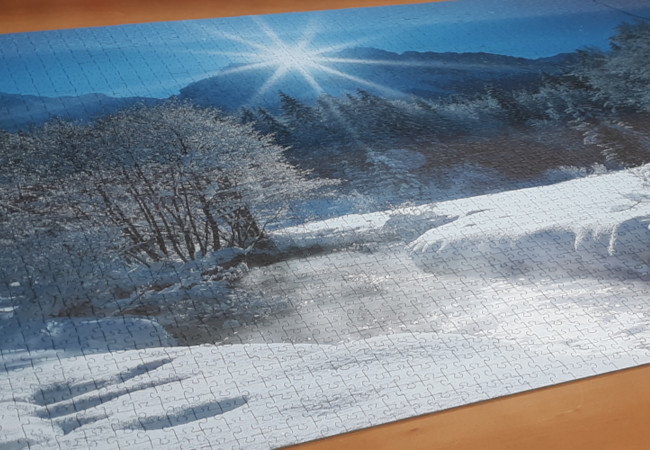 It’s a time of seeing things in a new way, and many people are now turning to what the New York Times wryly called “a tool to save humanity”: a stay-at-home stress-buster that’s familiar, comforting, and also vaguely geeky: jigsaw puzzles.

“The jigsaw puzzle is clearly having a moment,” NPR’s Lulu Garcia-Navarro reported recently. She even noted a spike in interest for a puzzle that NPR calls “impossibly difficult”: a clear jigsaw puzzle with 144 see-through pieces “revealing, well, nothing.”

Search Hacker News for the phrase “jigsaw puzzle,” and you’ll find several related links. In 2018, one academician-turned-developer shared a link to a series of complicated Infinity Puzzles, 133-piece wooden creations inspired by the topological phenomenon known as the Klein bottle. Even when assembled the puzzles have no edges or defined shape, no beginning or end, “where you don’t know up from down… They can be assembled in thousands of different ways…” the website explains, adding “Multiple infinity puzzles can be combined to create a larger continuous puzzle.”

Infinity Puzzles are back! You can now purchase the Infinite Galaxy Puzzle and Earth Puzzle on our website again!
Galaxy : https://t.co/69YjxrgaFf
Earth : https://t.co/KIY4iHqLfU pic.twitter.com/GzQz2c6HZH

It’s just one of several technology-enhanced puzzles from a design studio named Nervous System, which also makes everything from jewelry to intricately-patterned lamps. The website explains that the company wants to push the boundaries of puzzle-making by deploying advanced precision-cutting technologies using a flavor of computer-aided design known as Computer Numerical Control. “The intricate branching shapes of our puzzle pieces emerge from a simulation of crystal growth and are laser-cut from plywood.”

The fascination is spreading. “Thanks to the Coronavirus quarantine, a whole bunch of us have rediscovered the joys of jigsaw puzzles as a wonderful way to pass the time,” writes the Nerdist website, sharing a remarkable find by another blog named Geekologie: a time-lapse video capturing the one year spent assembling a 42,000-piece puzzle.

The completed puzzle was over 24 feet long. 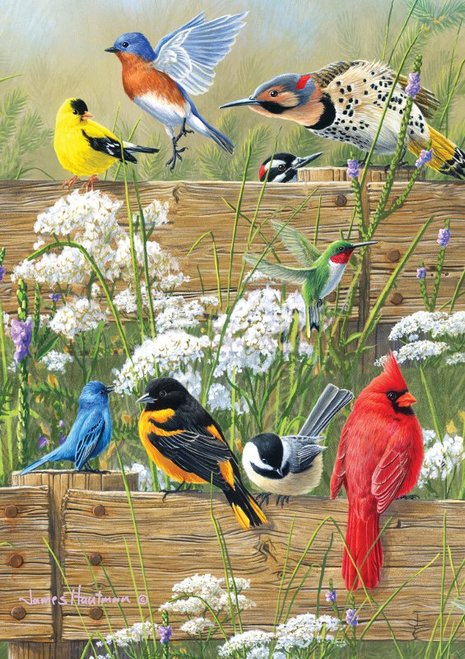 Buffalo Games’ “Songbird Menagerie” puzzle rose on Amazon’s best-seller list from #4,411 to #67 (making it one of Amazon’s top-five fastest-trending items).

Now with so many people sheltering at home, working from home, and having children home from school, jigsaw puzzles have suddenly become much more popular, it would appear. “As if things weren’t bad enough, now there’s a shortage of jigsaw puzzles just when we need them most,” the Wall Street Journal explained three weeks ago.

“I can assure you, over the next few months, we’re going to consider those jigsaw puzzles absolutely essential,” said Australian Prime Minister Scott Morrison — after which sales increased even more, according to the Sydney Morning Herald. The newspaper notes that one online puzzle store in Sydney had its biggest day ever.

Brent Feuz, the marketing manager at New York-based Buffalo Games, told me that at some of its outlets are now actually selling 12 times as many jigsaw puzzles as last year. “Activities that people can do while social distancing at home are in high demand right now.” The search term “adult jigsaw puzzles” on Amazon has shot up to the #8 most searched term on all of Amazon.

In fact, four of its jigsaw puzzles entered the top twenty fastest-trending items on Amazon — nearly all of them apparently sold out — along with a roll-up floor mat for storing jigsaw puzzles.

Buffalo Games is not the only puzzle-maker seeing a surge in demand. Fun Stuff Toys (on Long Island) told Newsday it already sold a stash of puzzles that were planned to last until September. “The quarantine is keeping everyone home and they need something to do,” owner Mike Timko explained.

Jigsaw puzzles, I have finished 196 pieces in 3962 seconds, https://t.co/y2L4eQ2Cbl, thanks. pic.twitter.com/IkqWwfGDe7

The New York Times also interviewed several other overloaded puzzle vendors. The director of the web site Jigsaw Puzzles Direct said they were receiving thousands of orders each day, while the director of Yorkshire Jigsaw was receiving a month’s worth of orders each day. Filip Francke, the CEO of Ravensburger Games North America, quantified the surge for CNBC. In 2019, the company averaged seven puzzles sold each minute. But for 2020 they’re averaging 20 puzzles per minute. 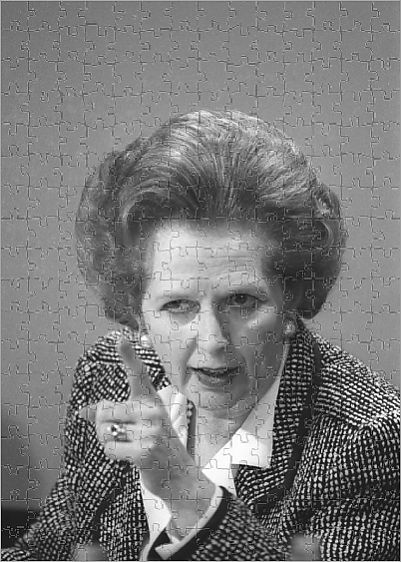 Reuters has licensed jigsaw puzzles of some of its iconic news photography. British Prime Minister Margaret Thatcher points a finger as she answers questions at a news conference in London, June 8, 1987. REUTERS/Roy Letkey

He also tells them he’s even seeing a boost in demand for their extra-difficult “Krypt” line of puzzles, which feature just varying shades of a single color.

This week at Ravensburger’s website’s home page, every puzzle was flagged as “currently out of stock” except the six flagged as “only available in stores.” Ravensburger’s puzzle-making factories in Europe are “running at full capacity,” the Journal reported, adding that Ravensburger hopes to be selling more puzzles through its website (and through Amazon) later this month.

“This is not a North America thing,” Francke later told NPR. “People around the world are turning to puzzles…

“The last time puzzles rose to such prominence, it was the Great Depression.”

CNBC also found stories of how puzzle retailers are meeting this surge in demand. Puzzle Warehouse reports they’re now filling 10 times their usual number of orders, and have actually hired 30 additional employees, while the puzzle manufacturer Springbok tells the media outlet that it is shipping around the clock. And the two co-owners of Boulder, Colorado’s Liberty Puzzles told CNBC that they’d sent all 70 of their employees home (while still paying their salaries) — leaving both co-owners now sitting in an empty factory trying to fill 750 orders themselves.

Over at Buffalo Games, marketing manager Feuz says its manufacturing has halted to comply with state guidelines, but “we are working on alternative manufacturing options in order to keep up with the incredible demand at this time.”

Even the technology involved comes with its own limitations. The New York Times noted Ravensburger normally spends four weeks shaping the pieces of metal that become the “elaborate cookiecutter” that’s applied with 1,100 tons of pressure to convert an image on cardboard into the thousands of individual pieces that make up a jigsaw puzzle. “The cutter can be used only a limited number of times before its edges are dulled. It can be resharpened once and must then be discarded. At busy times of the year, the company will go through several cutters a day.”

But how are people getting the puzzles while still social distancing? “I’m making appointments for people to pick up puzzles off my porch,” a staffer at one local toy store told a San Diego news team.

One local even began using social media sites to set up puzzle swaps. “She’ll leave a box outside for her neighbors and they can take a puzzle or leave a puzzle. Some even make deals with her online.”

Picking Up the Pieces

Barnes and Nobles’ chief executive told the Wall Street Journal that “Demand has far exceeded supply. We’re pretty much selling it as we get it in.” So at some stores salespeople are walking the puzzles out to people waiting in their cars, the Journal reports, including both Barnes and Noble and Sullivan’s Toys & Art Supplies, in Washington, D.C., which is also making home deliveries of toys 30 times a day, about half of which include jigsaw puzzles.

In chaotic times, it’s nice to know people around the world are all simultaneously re-discovering the simple joys of assembling a jigsaw puzzle. The co-owner of Clayton’s Toys on Main Street, which is offering curbside pickup, tells the Buffalo News, “We’re totally blowing through them. We’re literally selling Christmas puzzles because we’re out of all the other styles.”

“Honestly it totally makes sense,” she adds. “I’m doing a puzzle at home right now as we speak; I’ve got it out on my dining room table.

“It’s a good way to decompress.”

SHARE THIS STORY
RELATED STORIES
Golden Paths Start with a Shift Left Watch Out, Attackers Have Their Heads in Your Cloud! SRE Housekeeping: Where to Get Started for New Hires Entrepreneurship for Engineers: Building for Customers’ Love How Will Working in Tech Change in 2023?
TNS owner Insight Partners is an investor in: Island, Noble.
SHARE THIS STORY
RELATED STORIES
How Jit Builds a Platform Engineering Mindset in the Cloud Golden Paths Start with a Shift Left A Brief DevOps History: The Road to CI/CD How We Manage Incident Response at Honeycomb 2022 in Review: AI, IT Armies, and Poems about Food
THE NEW STACK UPDATE A newsletter digest of the week’s most important stories & analyses.
The New stack does not sell your information or share it with unaffiliated third parties. By continuing, you agree to our Terms of Use and Privacy Policy.